An ascent for female emancipation in Nepal 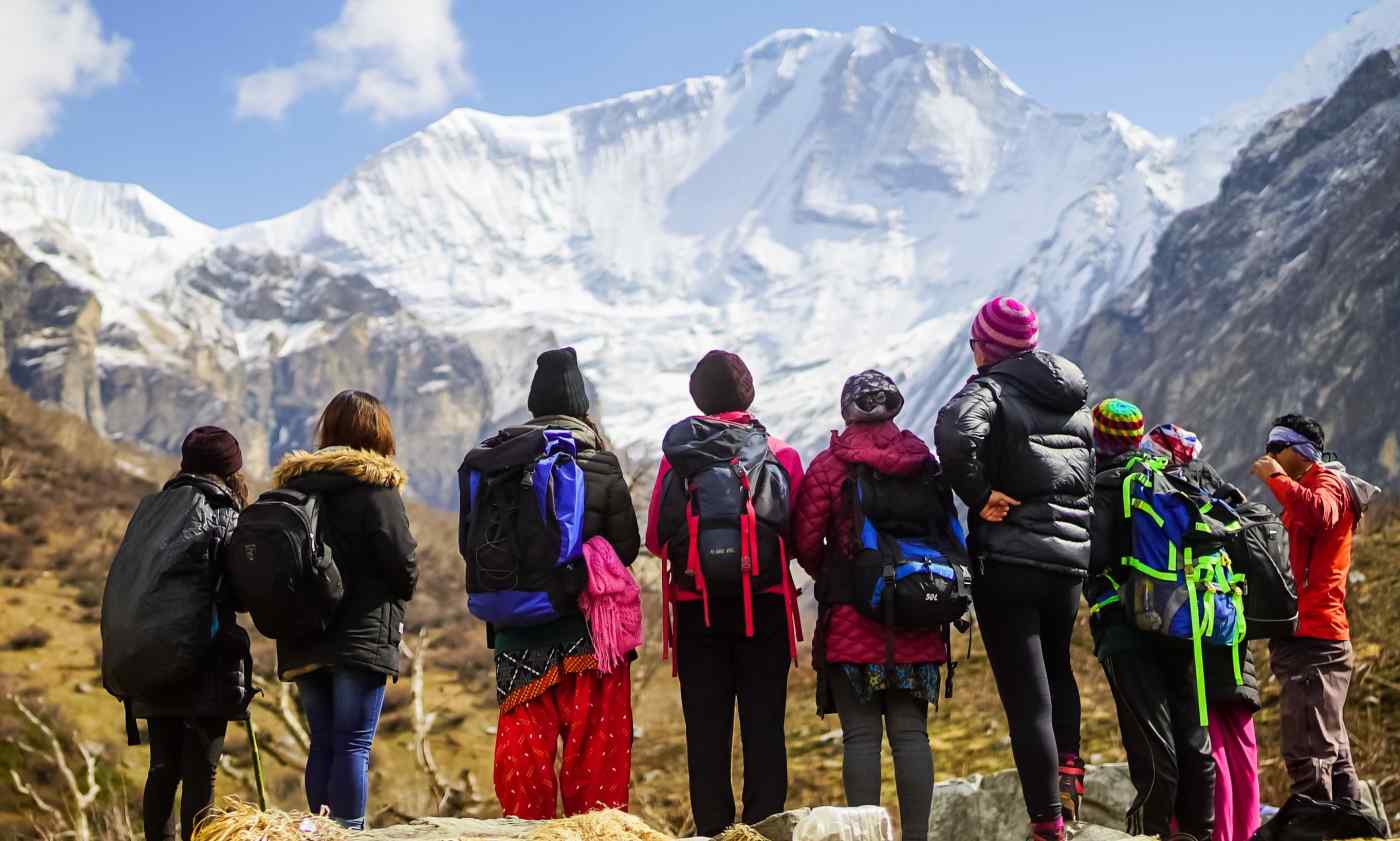 The four Nepalese women climbers and the internationally famed mountaineers they are climbing with stop to admire the mountain during their acclimatization journey to the base camp of Mt. Saipal in March. (Photo by Ashok Thapa)
ASHOK THAPA, Contributing writerSeptember 19, 2018 13:45 JST | Pakistan, Bangladesh, Sri Lanka, Nepal, Bhutan
CopyCopied

Saraswati Thapa, 19, grew up poor in Bajhang, in Nepal's far west region. Her parents work their barely productive fields year-round, but they do not yield enough to feed the family for even six months. This is not an unusual story -- many young women and their families live in extreme poverty in the  region. But Thapa was determined to be different. She decided to join a team of daring young women out to do something that would take their nation's breath away.

Thapa is part of Mission Saipal, a team aspiring to reach the summit of 7,031-meter Mt. Saipal later this year.

The climb itself is daunting enough, but the women face a host of social and cultural obstacles as well. Their parents and communities fear for their safety -- the ascent is challenging, and even locals have never scaled the peak. More importantly, the mountain is sacred -- people in the area believe it is the abode of Lord Laangey, a local deity -- and for women to even enter the surrounding area would disrespect the god of the mountain, and the community would be cursed.

"Watch out! The touch of women's menstrual blood on the surface of the mountain will bring misfortune. One of you could die!" a local shaman cautioned Thapa and her three mountaineering friends -- Sangita Rokaya, 21, Laxmi Budha, 26, and Pabitra Bohora, 20.

Undeterred, and inspired by the adventure, they arrived at base camp for acclimatization in March. Villagers and family members gather to bid farewell to Saraswati Thapa, one of the mountaineers, as she leaves for her acclimatization journey in March. (Photo by Ashok Thapa)

"Climbing any mountain is difficult," Thapa said, "But nothing can be as difficult as being a woman in my society."

Nepal is a deeply conservative and patriarchal society, and the contrast in the treatment of men and women becomes sharper as one moves away from the capital, Kathmandu. Nestled in the Himalayas near the Chinese border, Bajhang district is as far away from Kathmandu, both geographically and culturally, as you can get in Nepal. Women are subjected to numerous regressive social traditions including chaupadi -- a cultural practice in which girls and women have to stay in an animal shed while menstruating. Sexual harassment and trafficking are commonplace. Many are denied basic needs like proper food, hygiene, economic self-reliance, and above all, a sense of dignity, liberty and social justice.

"We live like cattle, deprived of education and health facilities, burdened with never-ending household chores, and treated like second-class citizens," Thapa said. "Compared to that, conquering this peak is going to be easy."

According to government statistics, women make up more than half of the population of Bajhang. Located about 900 km northwest of Kathmandu, the region sits near the bottom of the human development index of the country's districts. The difficulty of access to the region and the lack of logistics mean that Mt. Saipal is not the first choice for climbing expeditions in Nepal. For Budha, another climber in the mission, the expedition represents something more valuable than her life.

Budha is a former child soldier with rebels that clashed with the government for more than a decade to fight against political and socioeconomic exploitation. Now, she is putting her life on the line again to continue her fight to emancipate the region's women.

The mother of a four-year-old daughter, Budha has the full support of her husband in this expedition. "I want to break down the myths about women," she said with steely determination in her eyes. "I am mustering the courage to undertake a feat that has been unimaginable in my community as well as the country."

The third member of the team, Bohora, dreams of becoming a source of inspiration for her four younger siblings to break the societal shackles and to escape the fate she faced.

She also wants to introduce the mountain to the world.

"I want to show the world Mt. Saipal's sublime beauty, and how difficult life is for women living in its communities," she said. "The ascent will not only be a victory for me, it will be a symbolic transcendence of the situation for women here." 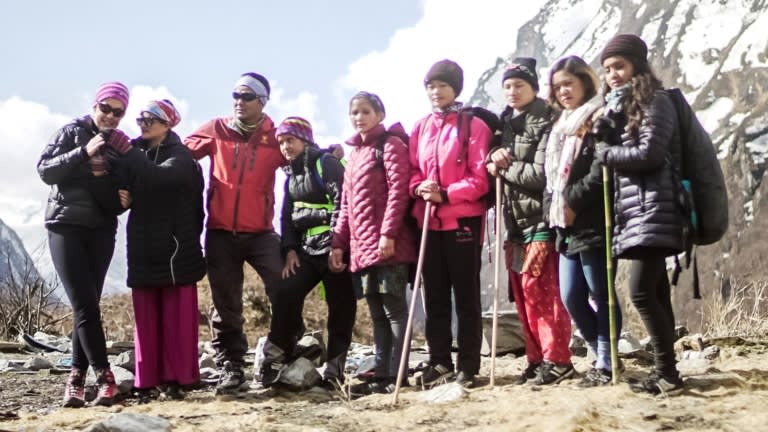 The four woman climbers, from second-right to fifth, and their companions stop at the foot of Mt. Saipal. (Photo by Ashok Thapa)

The final member of the team, Rokaya, believes her conquest of the summit will be a slap in the face of conservative people who have victimized local women for generations in the name of religious and cultural norms. After returning from the mountain, she wants to work for the welfare and promotion of girls and women in her society.

The organizer of the expedition is Bhojraj Bhat, a veteran Nepali journalist and director of the internationally acclaimed documentary "Sunkali." He said the expedition envisions helping the four women free themselves from their mental chains of "impurity" and "incapability." He wants to send a message of female empowerment and help them live lives of dignity, freedom, purity and magnanimity.

To help the women realize their goal, the expedition will be supported by a team of renowned international mountaineers including Jorge Egocheaga, Edurene Pasaban Lizarribar, Martin Ramos, Jef Houben and Bridget Schletty, among others. They have all earned renown in mountaineering by conquering almost all of the world's 8,000-meter peaks.

"These renowned summiteers have agreed to be part of this expedition to prove that no religiosity is associated with climbing, and instead it's all about testing one's own limits and caliber," said Bhat, who hopes the expedition will change the perception of women in Nepali society.

The expedition will also conduct two sophisticated health camps in the remote mountainous region of Bajhang, which will focus on the health of women and adolescent girls.

"The mission is more than just the climbing expedition. It is about the region's scenic, virginal topography and its unique culture and festivities. It is about the hopes, aspirations and sorrows of four girls who dared to dream for their dignity," Bhat added.