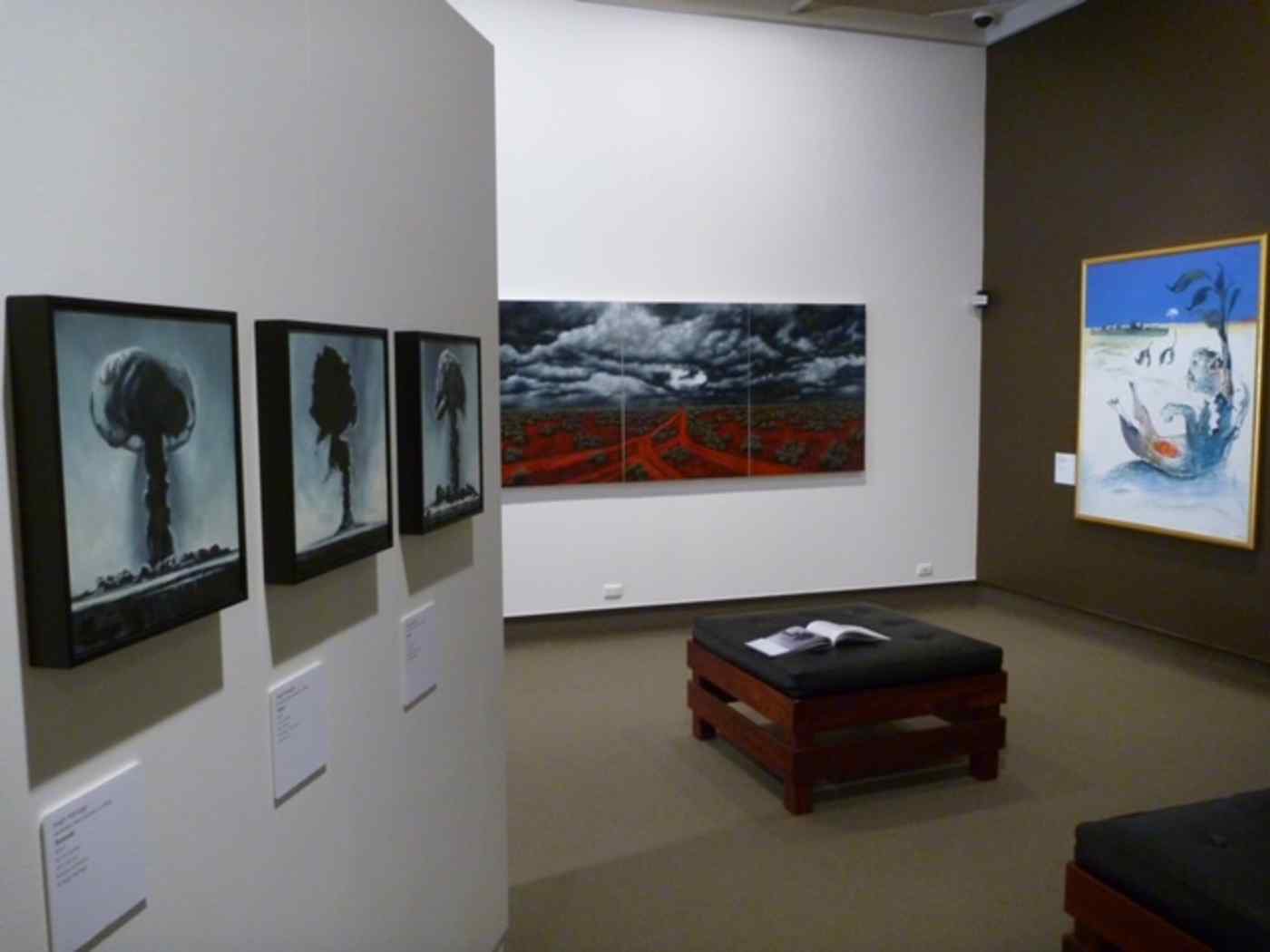 MELBOURNE -- Australia's decision to skip recent negotiations on a global nuclear weapons ban appears at odds with domestic public opinion at a time when an art exhibition highlighting the country's dark past as a nuclear testing ground is touring nationally.

In late March, representatives from more than 115 countries gathered at the United Nations headquarters in New York to negotiate a legally binding nuclear weapons ban that advocates say is the most promising step toward nuclear disarmament since the nuclear Non-Proliferation Treaty was adopted almost five decades ago. Presiding over the negotiations, Ambassador Elayne Whyte Gomez of Costa Rica said on March 30 that the adoption of a treaty during the second round of talks scheduled to begin in June was "an achievable goal." But the conference was also notable for its absentees. The nine nations known to possess nuclear weapons -- the U.S., the U.K., Russia, China, France, Israel, North Korea, Pakistan and India -- all failed to take part, alongside a string of U.S. allies in Europe and beyond. Officials from several non-participating countries said publically that, while a world without nuclear weapons was a common aspiration, the prohibition treaty was unrealistic in the current international security environment.

Explaining Australia's absence, James McGrath, a senator for the ruling Liberal Party in Australia and assistant minister to the prime minister, told parliament in Canberra that the proposed treaty "would not enhance security" and would deepen divisions between nuclear and non-nuclear weapon states. A national poll conducted by research organization Ipsos in March, however, found that three in four Australians thought the government should take part in the negotiations, which were also supported by the opposition Australian Labour Party and the Australian Greens.

"The Australian public overwhelmingly supports nuclear disarmament and wanted the Australian government to participate," said Tim Wright, Asia-Pacific director of the International Campaign to Abolish Nuclear Weapons (ICAN), who attended the conference in New York. "But unfortunately, the government decided to take orders from [U.S. President Donald Trump's] administration instead of listening to the Australian people, based on the misguided belief that U.S. nuclear weapons keep us safe."

Observers have long highlighted Australia's conflicted stance in claiming to support nuclear disarmament, while relying on America's extended nuclear deterrence. Australia's 2016 defense White Paper reaffirmed that: "Only the nuclear and conventional military capabilities of the United States can offer effective deterrence against the possibility of nuclear threats against Australia."

An additional front on which Australia has been accused of contributing to global proliferation concerns -- as well as environmental issues at home -- is its export of uranium. Australia is the world's third largest uranium producer, behind only Kazakhstan and Canada, and has 24 nuclear cooperation agreements allowing uranium exports to more than 40 countries.

Recent legislation paving the way for uranium exports to India has attracted criticism on the grounds that the nuclear-armed country is not a signatory to the NPT and has a poor nuclear safety record.

"Australia claims that it supports the NPT but I think that deal with India together with the boycott of these current negotiations really demonstrates that it is not supportive of the NPT at all," Wright told the Nikkei Asian Review.

In the absence of official Australian representation at the U.N. conference, activists such as Sue Coleman-Haseldine, a Kokatha-Mula Aboriginal woman, spoke about the concerns of civil society. 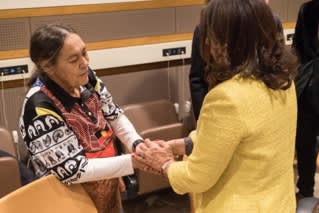 She was a young child when the British began testing nuclear weapons in the 1950s at Maralinga, a site northwest of her birthplace on Koonibba mission in the state of South Australia, leaving a radioactive legacy that is still being reckoned with today.

In total, British authorities, with the consent of the Australian government, tested 12 atomic weapons in Australia -- seven at Maralinga; three off the coast of Western Australia; and two at Emu Field, another site in South Australia -- from 1952 to 1957. A series of secretive, smaller, but no less toxic, nuclear trials continued at Maralinga until 1963, scattering vast quantities of highly toxic plutonium across the landscape that was not sufficiently removed or buried for decades.

Aboriginal people were displaced from their traditional lands and civilians and military personnel were exposed to dangerous levels of radioactivity. Seated alongside a Japanese survivor of the atomic bombing at Hiroshima, Coleman-Haseldine told conference participants of the high rates of cancer and chronic illnesses that have afflicted people in her community.

Coleman-Haseldine, co-chair of the Aboriginal-led Australian Nuclear Free Alliance, stressed the importance of keeping the memory of Maralinga alive.

"I still go out bush, I still teach my grandchildren how to survive off the land, even though that land has been contaminated," she told the Nikkei Asian Review.

"We don't have a lot of choice in that respect. But we do have a choice in the fact that we don't want to see it happen again... You can't turn back time but you can most certainly work towards a better future."

One initiative helping to keep the legacy of Maralinga in the public eye is an art exhibition, "Black Mist, Burnt Country," currently on a national tour, which features a range of works that reflect on the murky history of nuclear testing in Australia. 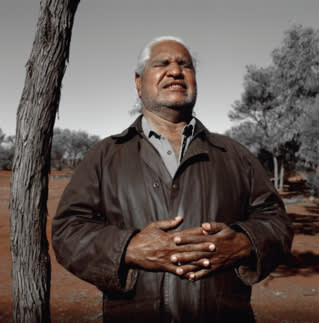 The curator, Jan Dirk Mittman, said the project was originally inspired by the work of the late indigenous artist Jonathan Kumintjarra Brown, a member of the "stolen generations," a term for the indigenous children who were forcibly removed from their parents in Australia until the 1970s.

When Brown moved with his family to Yalata, South Australia, in his late 20s, he learned about the devastating consequences of nuclear testing in the state and "set out to paint the story," Mittman said.

"He is probably the artist, or most certainly the artist, [who] has created the largest body of works in the country focusing on the story," Mittman told the Nikkei Asian Review. "Initially it was tempting to create an exhibition around him and his works. But then I discovered others."

These other works include Warren Paul's clay model of Australia, bordered by barbed wire and littered with toxic waste drums oozing chemicals; Karen Standke's triptych of a crimson red desert track under menacing banks of dark clouds; and a glass petri dish holding a sample of Maralinga soil.

Each work in the exhibition, which is now showing in Swan Hill in northern Victoria until late April before moving to another locale, reveals a different and often painful chapter of the atomic tests.

One of several pieces by Brown, Black Rain, depicts radioactive fallout and includes reference to the Milpuddies, an Aboriginal family of four who authorities found at Maralinga in May 1957 camping on the edge of a crater wrought by an atomic bomb just months earlier. The family was unaware of official moves to clear the radioactive site of people.

A later Royal Commission into the British nuclear tests established in 1984 found that, aside from making sure the family were showered, there was no other evidence to suggest the authorities concerned themselves with their welfare. Edie Milpuddie was pregnant at the time and her baby was later stillborn.

Another powerful work is a photograph of Yami Lester, a Yankunytjatjara man who was blinded as a young boy after the "black mist" descended on his community following an atomic bomb detonated at Emu Field in 1953. In the portrait, taken by photomedia artist Jessie Boylan, the elderly man's eyes are clenched shut as he appears to be processing a painful memory.

The real experience of people such as Lester is evermore salient in Australia as nuclear issues -- including ongoing government deliberations on a proposed nuclear waste dump in South Australia -- continue to be debated. Boylan, who has regularly kept in touch with Lester since taking the photograph in 2006, described him as a leading voice on nuclear issues, land rights and other issues affecting his community.

The photograph reflects his pain, Boylan said, but also his strength.

"It's about who he is and who he has become," Boylan said. "A survivor and an advocate and someone who has never let that story die."