Online exercise is popular but will the sector outlast the pandemic? 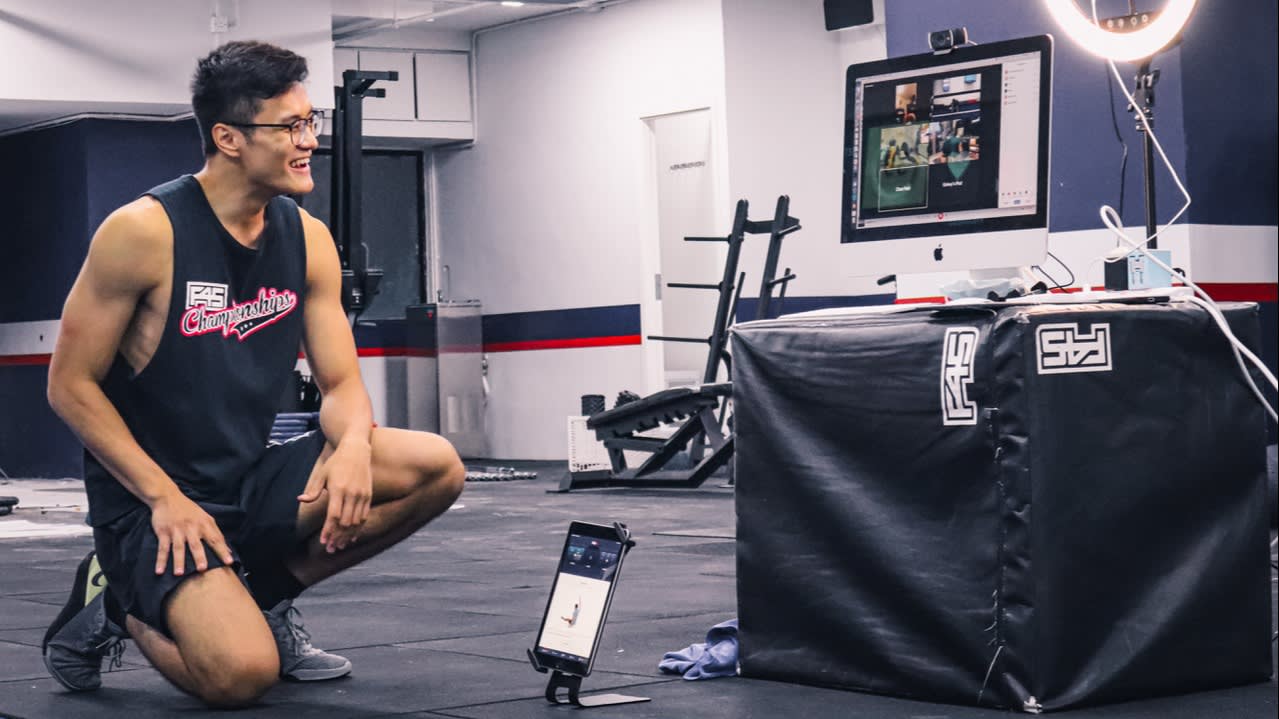 DENPASAR, Indonesia -- In March, when Bali's Odyssey MVMT yoga and fitness group temporarily closed its yoga studio, I began attending online classes via the company's website. As lockdowns and social distancing spread I realized I was far from alone in going virtual.

When Japan urged people to stay at home to prevent transmission of COVID-19, about 40,000 senior citizens logged onto YouTube to watch a free workout video produced by a care-home operator featuring simple exercises and stretches demonstrated by models standing and sitting on chairs. The number of viewers was noteworthy, but its reach was tiny compared to "Get Abs in 2 Weeks," by Brunei-born Australian fitness trainer Chloe Ting. Posted on YouTube in August 2019, Ting's video went viral during the pandemic, racking up 222 million views -- part of a worldwide trend that has seen much of the fitness industry go virtual.

The result has been an explosion of online fitness classes, smart wearables, apps and virtual events such as the OCBC Cycle 2020 Virtual Ride in Singapore. Originally scheduled to take place on the streets of the island state in July, the race is now a digital event, closing in November, in which participants will use a smartphone app to record their ride times on an online version of the 42 km course.

"People deserve to have something they can get excited about during this challenging time," said Koh Ching Ching, a senior official at Singapore's OCBC Bank.

A 2019 study by Allied Market Research, a unit of India's Allied Analytics, predicted that the global virtual fitness market would grow in value from $6 billion to $59 billion by 2027. The market is dominated by North America, which has the most health and fitness facilities per person. But the Asia-Pacific region is expected to have the highest growth rate during the forecast period, the study found, because "the proliferation of mobile devices and pro-fitness government policies are enabling the exponential rise of adoption of online fitness solutions." “Get Abs in 2 Weeks,” a YouTube video posted in August 2019 by Brunei-born Australian fitness trainer Chloe Ting, went viral during the pandemic, racking up 222 million views. (Screen grab from YouTube)

Health and wellness apps featuring prerecorded and livestreaming fitness classes "appear to be the most cost-effective solution in developing nations across Asia-Pacific," the study noted.

In March, Australian actor Chris Hemsworth, who once trained with Ting, offered his 43 million Instagram followers a free six-week trial of his new fitness app Centr -- billed as a personal trainer, dietitian, chef and wellness coach in one app. "Centr was founded to make health and happiness accessible to all, and I hope that this will make that access even easier during the current health crisis," Hemsworth wrote of the app, which now charges users $10 per month.

According to Sensor Tower, a U.S.-based provider of market intelligence for the global app economy, Centr had been downloaded 70,000 times by July, earning Hemsworth $600,000 in monthly subscriptions.

In 2018, there were 250,000 fitness and health apps available at online stores, according to a study by Australia's Bond University. And the sector is growing fast. Technavio, a U.K.-based technology research and advisory company, forecast in November 2019 that it would expand by 12% a year until 2024. There are no figures for growth since the pandemic began, but anecdotal evidence suggests that fitness professionals around the world have scrambled to move their businesses online.

"There was a huge sense of panic and an avalanche of instructors telling their followers on Instagram and Facebook they have moved to Zoom (an online conferencing service) or built an app," says Kit Cat Cahill, a Bali-based yoga instructor. "But most of them had no strategy, no idea who their clients would be or how to access them, and no idea how to set up online payment systems to monetize their content. So they did the most basic thing. They dumped content on Facebook and Instagram and asked users to make donations to their PayPal accounts. Based on what I have heard, only about four out of 10 made any money."

Even before the deluge of poorly constructed online content, research showed that most fitness and health apps do not deliver tangible results. "The overall evidence of effectiveness was of very low quality," Bond University found. "Our recommendations for ... reducing research waste and potential harm in this nascent field include encouraging app effectiveness testing prior to release." 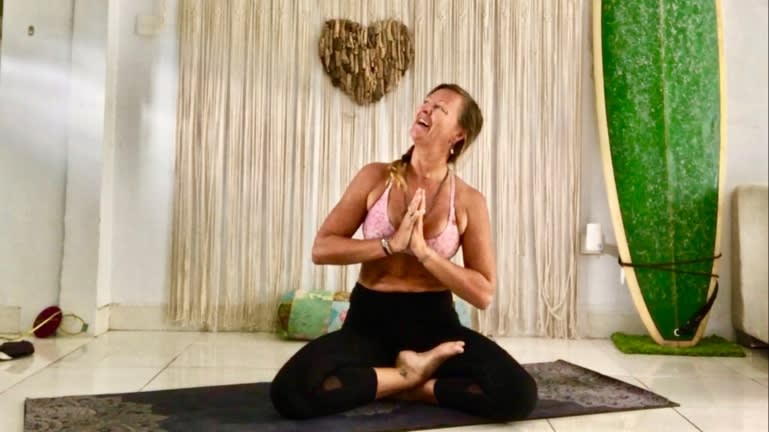 Kit Kat Cahill practices yoga at her studio home in Bali. “There was a huge sense of panic and an avalanche of instructors telling their followers on Instagram and Facebook they have moved to Zoom or built an app,” she says. “But most of them had no strategy." (Courtesy of Kit Kat Cahill)

Cahill was fortunate in that she had already spent 18 months developing sophisticated and professionally targeted content through her website, perfectlyimperfectyogis.com, before the pandemic. "It's not just content people can download," she says. "It's a three-month interactive transformation program targeting middle-aged women that I designed from scratch. I use Skype to lead and interact with my clients to deliver weekly outcomes." Cahill said she takes only four clients at a time, charging $4,800 Australian dollars per person.

Shelley Clark, who owns the F45 Fitness gym franchises in Hong Kong's Wong Chuk Hang and Quarry Bay suburbs, was quick to grasp the limitations of prerecorded content when the Chinese special administrative region's government closed all gyms on March 28.

"F45 is not like a big traditional gym with hundreds of members who the owners do not know personally know. We do small group classes that form very strong bonds with our members," she says. "So when we had to close, most of our members supported us by keeping their membership active, and we came to the party very quickly with our Live membership alternative." F45 instructors lead an online class in Hong Kong. Local franchise owner Shelley Clark says she retained about 40% of her members through her Live classes, but acknowledges that it is not a perfect solution. "You can't get the same depth of information as you would from face-to-face training," she says. (Courtesy of F45 Fitness)

F45's Live classes feature two trainers in the studio who lead high-intensity classes using Zoom or Facebook Live to interact and encourage members as they would in a normal gym experience.

"Most people's apartments in Hong Kong are very small, so we came up with a bunch of new workouts based on body weight exercises that did not require a lot of space," Clark says. "Our trainers also had to get creative and show members how to use things they already have at home for resistance training, like water bottles or backpacks full of books."

Clark retained about 40% of her members through her Live classes. But the system, she says, has its limitations. "There are health issues you simply cannot address online, such as why someone is overweight. You can't get the same depth of information as you would from face-to-face training." Cure.fit, India's most popular health and fitness app provider, believes it has solved the problem by using artificial intelligence. Dubbed the Energy Meter, its proprietary technology uses more than 100 subsystems and customers' cameras to track specific body movements. It then creates real-time fitness reports that are displayed at the end of each exercise session to help users understand the effort they are putting into each workout.

"Our Energy Meter not only keeps users engaged throughout the entire class," says CEO Mukesh Bansal, "it also gives them a goal to help achieve their desired level of fitness."

Cure.fit claims that up to 2 million people in India attend its live classes every day. In July, it launched in the U.S., and expanded into one-on-one classes with third-party trainers. "Our rapid growth will afford millions of new users in the United States the opportunity to enjoy our app when they need it the most," Bansal says. Cure.fit is the No. 1 fitness app in India, with more than 200 million members. (Screenshot from Cure.fit website)

But what will happen when -- or, perhaps, if -- lockdowns and social restrictions end? The evidence from Hong Kong, where gyms reopened on July 2 only to close again 13 days later when a fresh wave of infections hit the city, suggests that the runaway popularity of fitness apps is a temporary phenomenon.

"We thought this is where the fitness industry was going, but the feedback from members was that online classes are good for a short period only," says Clark. "We are now in our second lockdown. Between lockdowns, demand for Live classes fell to the point that it was simply not viable to run them anymore."

"If you are self-motivated, you can get a great workout from an app. But the reason most people join F45 is they don't have the motivation to exercise by themselves in the long term. [The gym] is not just a place to exercise, it's a community, a destination. It's a service that meets our craving for human interaction."

My experience with virtual yoga classes was not dissimilar. Though highly motivated to maintain my practice when social-distancing policies were peaking in Bali, I found online yoga classes boring. My interest soon waned and by the second week I gave up. Fortunately, Odyssey's studio has now reopened, and I am there every morning for a stimulating workout session -- and that all-important social interaction with the instructors and my fellow yogis.