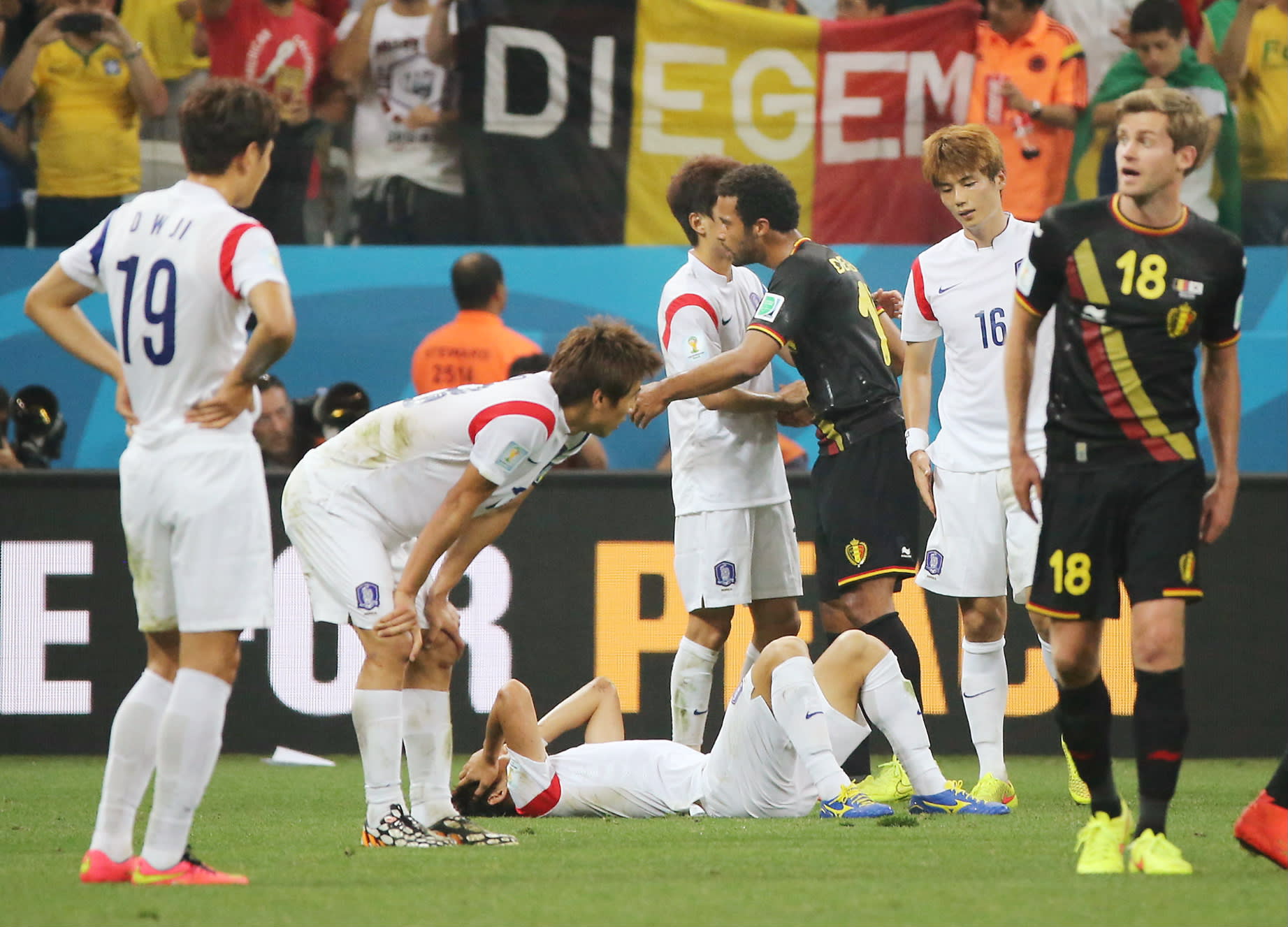 South Korean national team players were despondent after it lost to Belgium on June 26, which meant South Korea would not advance to the knock-out stage.

FORTALEZA, Brazil -- All four Asian national teams that made it to the 2014 FIFA World Cup in Brazil were eliminated in the first-round group stage. The last time no member of the Asian Football Confederation made it to the second stage was at the 2006 World Cup.

This poor showing could bode ill for the future for soccer in Asia as it could stir serious debate about cutting the allotment of World Cup slots for Asia.

Japan, South Korea, Iran and Australia in total had three draws and nine losses in Brazil. All four finished at the bottom of their groups. This is the first time since 1990's World Cup that not a single Asian team won a match.

Yet, these disappointing results are hardly surprising, given the FIFA World Rankings for these teams. Yes, these rankings do not always reflect the true strengths of each team, but most national teams that made it to the round of 16 are still top-20 teams by ranking. Costa Rica, ranked 28th, pulled off a surprise finish at the top of the highly competitive Group D, which also had Uruguay, England and Italy. Greece, whose second match against Japan ended in a draw, is ranked 12th.

Iran is ranked 43rd, the highest among Asian teams. Japan is next at 46th. Given that most Asian teams rank between 40th and 60th, it is not surprising that no Asian team made it to the round of 16.

There were, however, some great moments in which these Asian teams held their own against some of the world's top teams. For instance, in Group F, Iran's defense proved to be a great challenge to Argentina and its star player, Lionel Messi. It came very close to being an upset, but Argentina prevailed 1-0.

In Group B, Australia fought a close battle against the Netherlands, with Tim Cahill smashing a volley into the goal for the equalizer. His shot has been consistently shown in highlight reels as one of the best of the tournament so far. The Netherlands won 3-2.

Even a single loss at the group stage can be debilitating. It seems almost but impossible to gain three group points -- which is what each victory awards -- against South American and European teams in seeded positions. If a team loses one match, the chances of becoming No. 2 in the group is very unlikely.

Japan was lackluster in its first match, which was against Ivory Coast. South Korea's defense fell apart in its second match, against Algeria. Even though Iran fought a good fight against Argentina, it failed to keep this up against Bosnia and Herzegovina, losing 1-3.

These four Asian teams appear far behind the top 16 in terms of team management skills. "The Asian teams did their best in their own different styles, but they are still far behind the rest of the world in many ways," said Hong Myungbo, South Korea's national team coach.

Iranian team coach Carlos Quieroz -- a Portugal native who has served as the coach for the U.K.'s Manchester United and the Portuguese national team -- said that Asian teams are making big mistakes. He added that simply bringing in the European ways of soccer will not work.

Step up, or step out

These poor results by Asian teams could spark debate about the need to review the number of allotted slots to Asia as a whole. Currently, Asia is given four teams, in addition to another team making qualification through intercontinental playoffs.

FIFA has been pushing to open up the World Cup's doors and afford slots to Asian and African countries in a bid to boost the sport's overall level worldwide, not just in Europe and South America. Critics say that such moves are partly intended as "vote-buying" efforts for the FIFA presidency, but it is undeniably true that the slot expansion has played a big part in soccer's promotion and development across Asia.

But it also means fewer slots for European countries. Under the current rules, Europe has 13 allotted slots, which adds intense pressure to the continent's preliminary round to qualify among the final 32. In fact, 12 European countries, including Denmark and Serbia, failed to qualify for the World Cup in Brazil even though they rank higher than Asia's highest-ranking team Iran. Denmark is 23rd while Serbia is 30th. Ukraine is ranked 16th, but it too did not qualify.

Given such a fierce competition in Europe, Asian teams have to deliver at the World Cup and prove their worth to the world. Otherwise, any criticism that they are receiving unfair, favorable treatment, is valid.