Industrial and commercial buildings are being transformed into boutique hotels 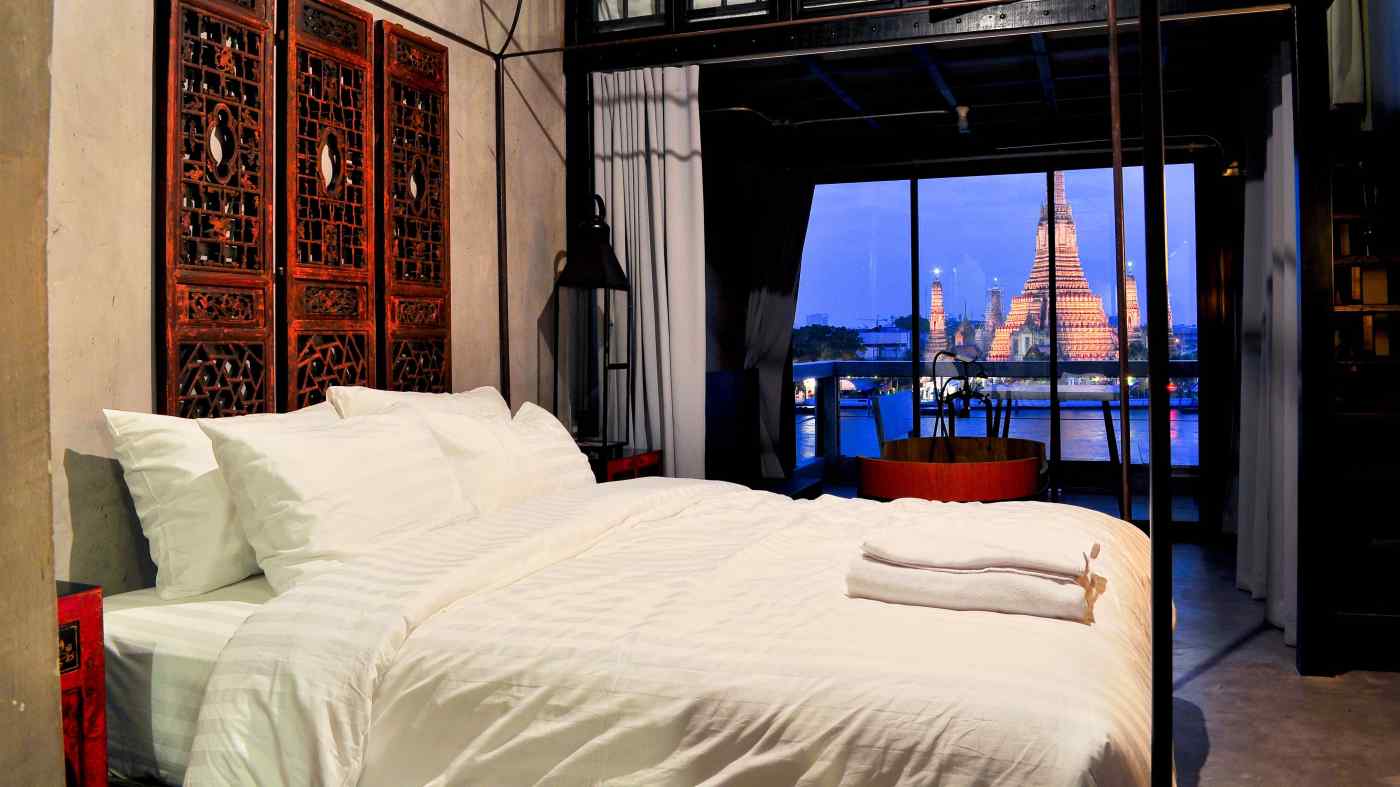 Guests at Inn A Day, a converted sugar warehouse​ on Bangkok's Chao Phraya river, wake up to the Temple of the Dawn. (Courtesy of Inn A Day)
KEN BARRETT, Contributing writerJuly 20, 2018 13:25 JST | Thailand
CopyCopied

BANGKOK -- They are usually big and bulky, often have a distinctive period design, and sometimes stand in conservation areas. Typically built with high load-bearing steel frames, they can accommodate wide internal spaces. They probably started life as warehouses or factory buildings, and they are potential moneymaking machines.

With much of Asia on a tourist roll, and with a seemingly unquenchable desire for accommodation, more and more industrial buildings are being converted for use as hotels. Many have only a limited amount of space for conversion to guest rooms, and are billed as boutique hotels. Others, perhaps retaining an industrial aura, are being converted into hostels, fitting perfectly into the budget traveler market that has arisen in the wake of low-cost airlines.

Bangkok has a large number of these conversions, mostly in the heart of the Old City, within walking distance of the main historic landmarks. Inn A Day, for example, is a former sugar warehouse, located on the bank of the Chao Phraya River in the historic district of Tha Tien market, with the famous Temple of the Dawn on the far bank peering in the windows, and the Grand Palace within five minutes' walk.

The hotel has only 11 rooms, with the cheapest measuring only 20 sq. meters, but Tha Tien is a rapidly gentrifying neighborhood and the hipster ambience and original room designs -- each is different -- makes this attractive accommodation for those who are not too worried about space.

Neither is it alone. Set in the same lane, almost next door, is Sala Rattanakosin, which has been formed from a brick warehouse and two late 19th century shophouses. There are 16 rooms here, and a rooftop bar where views of the stunning Temple of the Dawn can be enjoyed with a sundowner. "Poshtel" is a recently minted word applied here to this "posh"​ Bangkok hostel. (Courtesy of The Printing House)

On the other side of the Old City, near the second moat and within easy walking distance of landmarks such as Golden Mount and the Metal Castle, the Bangkok Publishing Residence is a former printing works. The family owners, who published magazines during the second half of the last century, have converted the site into an eight-room hotel that is also something of a museum to the long-lost art of hot-metal printing.

Behind its rather blank 1960s facade on Lan Luang Road, the hotel houses ancient printing presses and blocks, vintage typewriters, and the tall metal stools that were used by compositors. A four-story atrium with a catwalk and exposed girders maintains the factory atmosphere, but the rooms have been fitted out in modern comfort.

Only a few minutes on foot from the Bangkok Publishing Residence, on Dinso Road, stands another former printing works that has been converted into a hotel, or "poshtel," as The Printing House likes to describe itself, using the recently minted word for an upscale hostel. Its clientele consists partially of "flashpackers," another neologism that means posh backpackers.

The family-owned Printing House is set inside a building that is more than 70 years old and was used to print textbooks. Retaining the industrial ambience, the main storage area on the ground floor is now the lobby; there is a bar on the rooftop, and the building's six stories house 15 guest rooms. A few of the rooms are dormitories with bunk beds, a configuration designed for Asian travelers arriving on budget airlines. Bangkok, one of the world's top tourist destinations, provides the most fertile ground for industrial building conversions. But other destinations are also creating startling examples of conversion jobs that combine architectural heritage with modern accommodation needs.

The Warehouse Hotel at Robertson Quay on the Singapore River is a meticulous restoration of an 1895 godown (warehouse) that is now a 37-room boutique hotel. The Warehouse was recently named 2018 Hotel of the Year in the Asia regional Awards for Hospitality, Experience and Design (AHEAD) run by Sleeper, a global publication for hotel design, development and architecture.

The building has a colorful history, including periods as an illegal liquor distillery, an opium den and, for a decade starting in the mid-1980s, a rave venue. But it had lain empty for almost 20 years before being acquired by the Singaporean hospitality company Lo & Behold Group, which is responsible for some of the city-state's grooviest restaurants and bars.

Two Singapore businesses -- Asylum, a design agency, and architects Zarch Collaboratives -- were commissioned to renovate the building. When they moved in, they found it bat-infested and with holes in the roof. The designers have retained the vaulted ceilings and original brick walls, and an old pulley system provides a dramatic visual effect. Modern innovations, however, including a rooftop infinity pool, a fine dining restaurant and a cocktail lounge would have had the opium smokers who once haunted the place rubbing their eyes in disbelief. 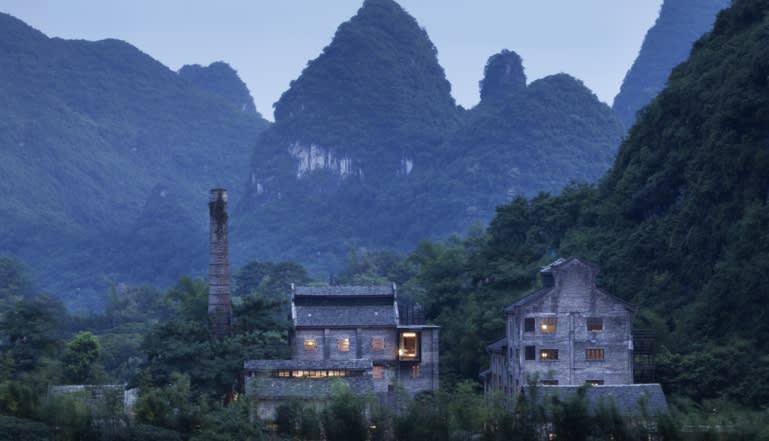 In Shanghai, The Waterhouse at South Bund is a four-story, 19-room riverside boutique hotel that was a Japanese army headquarters during the 1930s. The original concrete building was three stories high, but a steel-based structure built on top by Neri & Hu, a Chinese design studio, evokes the industrial past while providing a rooftop cocktail bar with views across the Huangpu River to the towers of Pudong.

Beijing's 798 Art District is home to a large number of converted warehouses, which have become studios, workshops and restaurants. Grace Hotel, a former crystal factory, was an early conversion, and its 30 rooms have become a destination for visitors seeking to experience the raffish vibes of this bohemian quarter.

A sugar mill built with considerable insensitivity during the 1960s among the picturesque green karst mountains of China's Yangshuo Region has been converted into the Alila Yangshuo Hotel. Vector Architects, the designers, have integrated the old industrial architecture in the central part of the hotel complex with newly built suites and villas whose design references the existing buildings, and the hotel's setting on the bank of the Li River is making it both a tourist resort and a venue for corporate events.

Even space conscious and notoriously unsentimental Hong Kong is finding new uses for its industrial buildings.

Kowloon Bay's 185-room Camlux Hotel is a seven-story structure built in 1985 -- ancient in Hong Kong terms -- as a factory for making Camel-branded vacuum flasks (Camlux combines Camel and luxury). Raymond Leung, an architect and member of the family who owns it, led the design team that converted the factory. Because the project was part of a government revitalization scheme, the building's industrial facade had to be retained. Inside the structure were large spaces such as the three stories above an old glass furnace, and the atrium that was used to cool the glassware; these have been converted to public areas and a courtyard. A wall in the lobby is fashioned from cream firebricks, while the reception desk is made from 100 glass vacuum flasks.

Of course, it is not just warehouses and factories that offer space once a building is redundant for its original purpose. The Prince Theatre in Bangkok, built in 1912 and in use as a cinema from 1917, is tucked into a tiny space up an almost invisible alley in the city's secondary Chinatown on Charoen Krung Road, and hemmed in by ancient shophouses. As a result it was almost impossible for developers to knock it down and replace it with a modern building.

The building is now the Prince Theatre Heritage Stay Bangkok, with accommodation from suites and duplex lofts to dormitory rooms. In keeping with the hotel's heritage there is a cinema-style lobby, ancient projection equipment, screenings of classic movies, and even salsa dancing.

In Manila the Henry Hotel offers 34 rooms in a building that was previously a compound for artists, built in the 1950s, and in Hong Kong the Tai O Police Station, built in 1902, has become the nine-room Tai O Heritage Hotel. In George Town, Malaysia, a collection of 1920s shophouses has been converted into a 45-room heritage boutique hotel that has been given a Gold Rating by the Green Building Index, an environmental certification program run by the Malaysian Institute of Architects.

As these examples suggest, architects and designers across Asia are finding that almost any spacious building can be converted into first-class accommodation, whatever the purpose of the original structure. The market is growing; all that is needed is creative talent and willpower.