From spas to psychics, booming pet industry is about more than food and grooming India currently accounts for 1% of the $225 billion global pet care industry, but with an annual growth rate of 17%, it is the world's fastest-growing market and is expected to be valued at around $500 million by the end of this year.   © Reuters
ANITA RAO KASHI, Contributing writerApril 24, 2022 08:00 JST | India
CopyCopied

While most began walking to the nearest border in hopes of being evacuated, a small number who refused to leave their dogs behind dug in. Soon caught up in a social media drama and bureaucratic red tape, enormous public pressure eventually helped them get what they wanted: a ticket home for their beloved pets.

One of those students was Rishabh Kaushik, 32, who flew home from Budapest in early March with his dog Maliboo to his home state of Uttarakhand. A few days later Arya Aldrin, 20, also left Bucharest with her Siberian husky Zaira to her home state of Kerala.

Rishabh and Arya are no outliers. Owning a dog was already in vogue among Indian millennials before the onset of the pandemic. But the need for companionship during India's harsh lockdowns triggered such a surge in demand for dogs -- and all the commitment that comes with owning a pet from the cradle to the grave -- that many owners now prefer to think of themselves as pet parents.

India currently accounts for only 1% of the $225 billion global pet care industry, but it is the world's fastest-growing market, expanding at around 17% annually and is expected to be valued at around $500 million by the end of this year.

With India's canine population estimated at up to 30 million, that has piqued the interest of several major international pet care brands who are now jostling for the attention of rising middle-class consumers with cash to splash on their puppies. From dog food to luxury couture, the booming pet industry has also spawned a plethora of local companies and social media platforms trying to outdo one another as the ultimate one-stop shop for all things pet-related.

Founded in 2008, Heads Up For Tails offers more than 1000 products from 80 different brands on its website including bandannas, bow ties and other party wear items. Late last year the company raised $37 million in a Series A funding round led by Sequoia Capital India.

"Our products are unique for pets, and include foods, food supplements, grooming, accessories, and toys," he said, citing a grooming brush that not only massages but can also apply shampoo and even medication. Still online-only, Augie is aiming to open 10 brick and mortar stores across the country by the end of this year, including two in Bangalore.

Known as India's pet capital -- it was a Bangalore-based pet relocation services company that helped Rishabh transport Maliboo back from Hungary -- six years ago, the city hosted India's first-ever dog park that is free on weekends and supervised on Sunday mornings.

"We wanted a fun place for dogs to play, interact and socialize. It has now become a fabulous place and genuine community for help and resources," said Priya Chetty Rajagopal, the force behind the park.

An executive search consultant, Rajagopal started a Facebook page called The Cubbon Park Canines which now has 17,000 members, and heads the CJ Memorial Trust founded in memory of her dog CJ, short for Calamity Jane. Rajagopal has also managed to shine a spotlight on street dogs, known colloquially as Indies. "Indies are now the new cool and we roll out the red carpet for them," said Rajagopal. 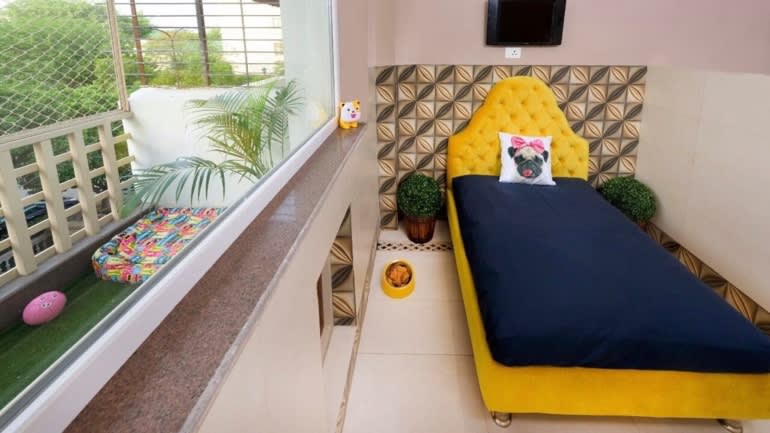 A suite at Criterrati, the world's largest pet hotel, located in the Delhi suburb of Gurugram that offers services including daycare, board, grooming, spa treatments, a swimming pool, a pet cafe, designer haircuts, a clothing boutique, and birthday parties.

Dog ownership is now seen as so all-encompassing that well-heeled millennials are now racing to make their pets' lives as comfortable as their own, with grooming, trainers, and run-of-the-mill doggy treats and products now almost seen as passe. Not only are dog walkers and sitters in high demand, so are reservations at one of the many dog resorts, spas and restaurants now on offer to enable owners to spend more quality time with their pets.

In the tony Delhi suburb of Gurugram is the four-story Critterati, a luxury hotel for pets. With nearly 1,000 square meters of floor space, it is the world's largest pet hotel -- and the only pet hotel in Asia -- offering services including daycare, board, grooming, spa treatments, a swimming pool, a pet cafe, designer haircuts, a clothing boutique, and bespoke birthday parties.

According to Critterati owner and founder Jaanwi Chawla, it was a bad grooming experience that led to the death of her dog Blackie that prompted her to go into the pet care business.

"The idea was to provide a hygienic place for pets for various services, but also for those who wanted daycare or were traveling," said Chawla. "As we researched and trained, the idea expanded and we decided to launch a place where pets can have a comfortable time."

Think music and television for entertainment, bedtime treats, extensive socializing... the list goes on. The hotel has 35 rooms in seven categories, including plush-looking balcony rooms, twin shares with bunk beds, even family suites. Able to house up to 50 dogs at a time, prices start at around $20 per night and go up to $45.

In Bangalore's Whitefield neighborhood is Therpup, a dog cafe and park that offers a special menu for dogs that includes a specially brewed 'beer' along with grooming and boarding facilities. In HSR Layout in the south of the city, The Pet People Cafe has gone one step further, roping in well-known chef Abhijit Saha to design the cafe's vegetarian-vegan menu. Saha's wife Shruti co-owns Bone Appetite, a bakery for dogs.

For those whose pets are more inclined toward the outdoors, there is The Picnic Company, founded by Bangalore-based travel experience curator Bhawna Rao who launched the company on a lark with a friend during a COVID lockdown. 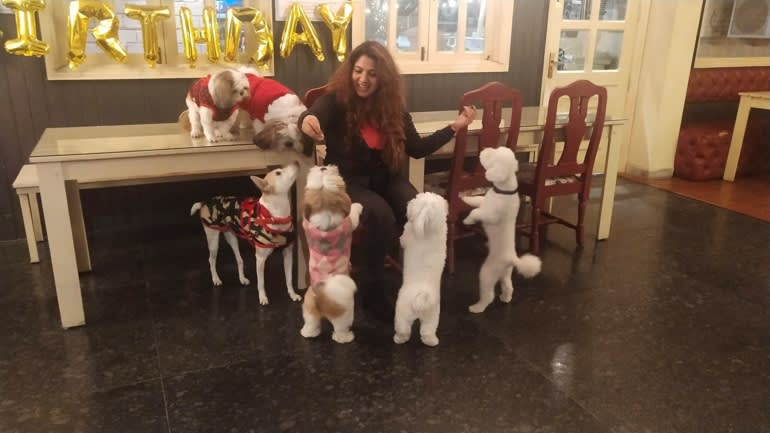 Top: Critterati owner and founder Jaanwi Chawla says it was a bad grooming experience that eventually led to the death of her dog Blackie that prompted her to go into the pet care business. Bottom: Mumbai-based pet-psychic Annukta Ganjoo: "I receive at least 1-2 calls a day from people wanting me to communicate with their pet."

"The idea was to offer bespoke picnic experiences within driving distance from Bengaluru amid nature," said Rao. "So we tied up with a few people who owned farms on the outskirts of the city and provided tailor-made picnic packages."

Pleasantly surprised when they received an inquiry for a doggy picnic, they found themselves enjoying adding the food treats "Both the dogs and the pet parents had a great time," Rao said.

For those dogs wearied by the dizzying array of plant-based food, gluten-free treats, sustainable food and accessories, designer cakes, wedding celebrations, and photoshoots, some businesses are now offering mental health solutions from aromatherapy sessions to ASMR to help pets regain their life balance.

"I receive at least 1-2 calls a day from people wanting me to communicate with their pet," said Mumbai-based pet-psychic Annukta Ganjoo, who claims that her telepathic powers enable her to talk to animals. "I can also communicate with them to understand why they are unwell or what they are going through."

Still, no clairvoyant is needed to prophesy that India's dogs are in the ascendant. After being maligned for so much of India's history, a dog's life is now clearly something to envy.