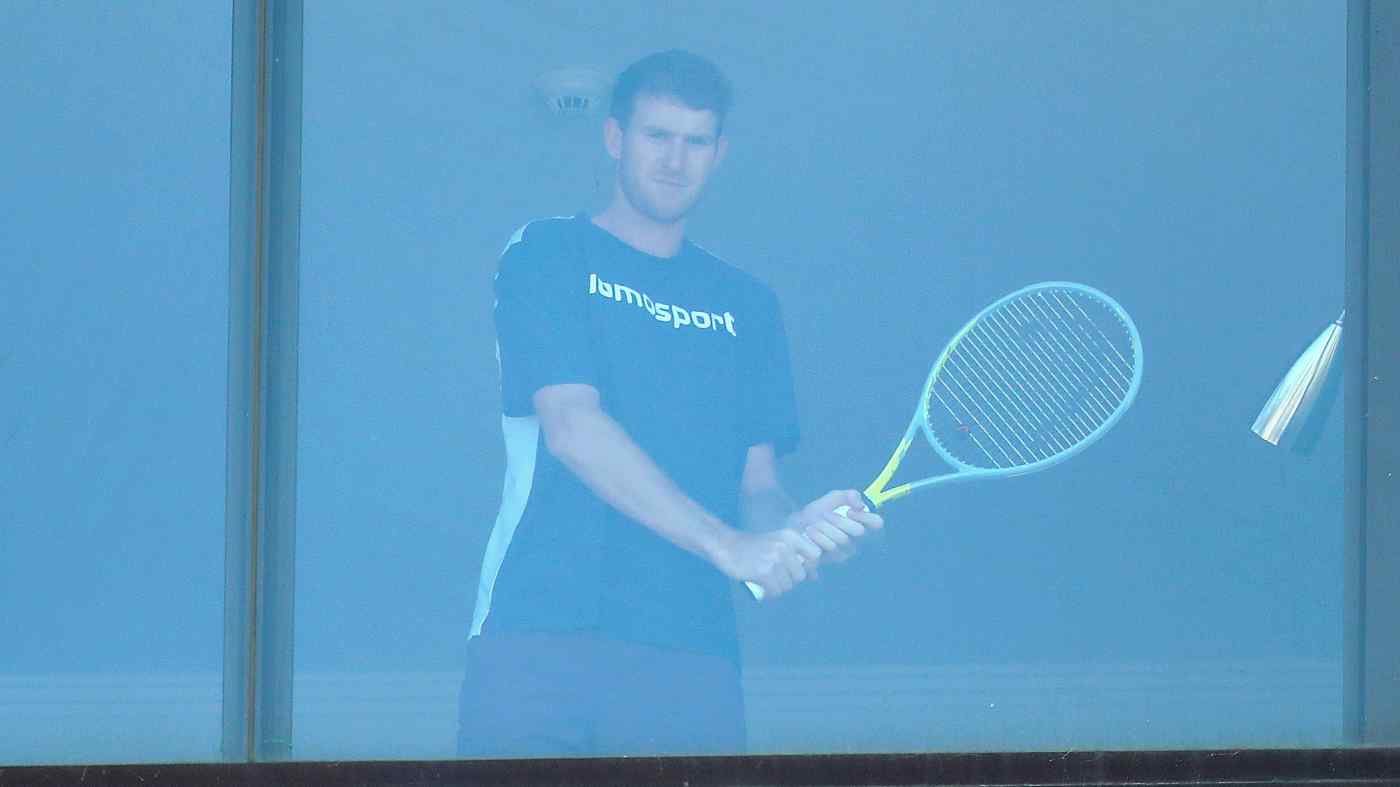 A tennis player looks out the window of a hotel where players are undergoing mandatory quarantine ahead of the Australian Open in Melbourne on Jan. 21.   © Reuters
DAVID HOPKINS, Contributing writerJanuary 28, 2021 20:29 JST | Australia
CopyCopied

MELBOURNE -- Bringing the world's best tennis players to Australia in the midst of a worsening pandemic was never going to be easy. But organizers of the Australian Open, the first major tennis tournament of the year, were determined to proceed. The outcome could yield valuable insights for organizers of sporting events around the world in the pandemic era.

Some 1,200 players, officials and support staff were flown to Australia on chartered flights in mid-January and entered into what the state government described as "the tightest quarantine arrangements in the world for a tennis tournament."

The measures involve a mandatory 14-day hotel quarantine, with permission for players to train for up to five hours per day at designated sites sealed off from the public; daily testing for COVID-19; and adherence to infection control measures such as wearing face masks. The penalties for noncompliance include fines or expulsion from the tournament. However, a string of positive cases among those arriving has put the tournament on a knife edge. Three of 17 chartered flights were impacted, forcing 72 players into stricter quarantine measures that meant they were unable to train. Among those affected were the American former U.S. Open champion Sloane Stephens, two-time Australian Open winner Victoria Azarenka, from Belarus, and the Japanese star Kei Nishikori.

Holed up in hotel rooms, a clutch of players have vented their frustration on social media. Some criticized what they saw as overly harsh measures that would hamper their ability to compete. At least two players compared their experience to being in prison. Angry tweets were fired off, then later deleted.

Wading into a growing furor, men's world No. 1 Novak Djokovic wrote to Tennis Australia, the tournament's organizing body, with a list of "demands" for the 72 players, including that they be moved to private homes with tennis courts -- a request that was, unsurprisingly, rebuffed.

Other players remained upbeat, posting videos of themselves practicing shots against hotel walls, doors and mattresses, pedaling on exercise bikes or running laps of their rooms.

"I think in the beginning, everybody was a little bit frustrated, of course, to be stuck in a room for two weeks. But on the other hand, I think Tennis Australia did everything they could to make it more convenient for the players," said Belgian player Kirsten Flipkens, who was not among the 72 players caught up in the harder lockdown.

Gearing up to compete in her 13th Australian Open, the veteran player explained the unique daily regimen during the quarantine period, including a cherished five hours outdoors for tennis practice, gym and nutrition, bookended by long hours back in the hotel room.

"Basically, daily, you're looking forward to the time when you can get out of your room. But you have to go with the flow a little bit, and you have to be flexible," she told Nikkei Asia. 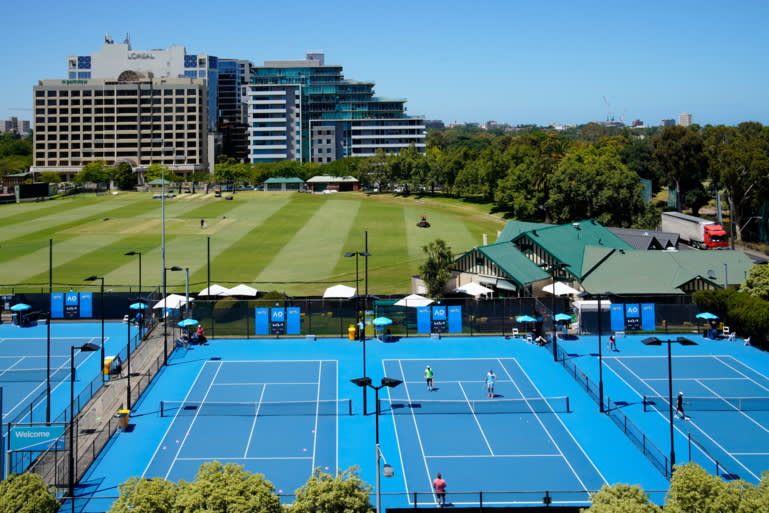 Players train in a restricted area near their quarantine accommodation in Melbourne on Jan. 20.   © Reuters

The Victorian state government has ample reason to be wary of the risks. A deadly second wave of COVID-19 last year was traced back to breaches in hotel quarantine arrangements that prompted a 112-day lockdown in Melbourne. Victoria has been by far the worst-hit state or territory in Australia, accounting for 820 of the 909 deaths due to COVID-19 registered nationwide by Jan. 22.

The state has since brought the virus under control, including a two-month streak of zero cases of community transmission up to the end of December.

"The Victorian health department is always very, very cautious ... and particularly since the second wave, so you'd expect them to be asking a lot [of the players] just as they did of Victorians," said professor Catherine Bennett, chair in epidemiology at Melbourne-based Deakin University, emphasizing the importance of the quarantine and daily testing measures.

"I'm not surprised that this has been a really strict package [of measures] that they put together. But still, it was one that Tennis Australia felt was going to be workable."

Other major events in Victoria have not received the same level of government support. The Formula One Australian Grand Prix, usually held in Melbourne in March, was recently postponed to November. And thousands of Australians stranded overseas by a cap on international arrivals may feel aggrieved at preferential treatment afforded to professional tennis players.

Mary-Louise McLaws, professor of epidemiology at the Sydney-based University of New South Wales and member of a World Health Organization expert advisory panel on COVID-19, said any large sporting event runs the risk of seeding more infection in the community.

"If you have players coming from the northern hemisphere, you're going to have a level of infection," she told Nikkei Asia. "We're very, very fortunate that they're actually in the quarantine hotel and not being given exemption. That's an excellent thing."

At least 10 positive cases have been linked to the Australian Open to date. For the tournament itself, Tennis Australia has also put in place a range of public health measures -- including zoning, reduced capacity, cashless transactions and over 200 hand sanitizer stations -- the success of which will be judged in weeks to come. A staff member in protective gear disinfects surfaces at Melbourne Park in between training sessions on Jan. 21.   © Reuters

The challenges facing the tournament may hold lessons for the organizers of other major sporting events, such as the postponed Tokyo Olympics, which are due to begin on July 23 but remain mired in uncertainty.

Officials have so far released only provisional plans on how the risks of COVID-19 will be managed, with decisions on a host of crucial matters, including spectators and quarantine measures, yet to be finalized. But Tokyo 2020, the body organizing the games, says the strategies implemented at events, including the Australian Open, are key reference points.

"Since last summer, various sporting competitions and events have resumed in Japan and other countries, and we have learned a number of lessons from the various COVID-19 countermeasures taken by the organizers," Tokyo 2020 told Nikkei Asia.

"As an example, we received extensive feedback from wheelchair tennis player Kunieda Shingo following the U.S. Open. ... We hope to continue to learn from the organizers of competitions and events across a range of sports."

With a state of emergency currently in place in Tokyo and three neighboring prefectures due to a surge in COVID-19 cases, speculation is rife that the games may be shelved altogether. Public appetite appears low, with a number of recent polls showing that a majority of people -- 80%, according to a Kyodo News survey in January -- believe the games should be canceled or rescheduled.

The Summer Olympics have been canceled only three times, in 1916, 1940 and 1944. But McLaws said it was clear that the Tokyo Games should not proceed. "It's totally unrealistic," she said, citing the many risks involved in holding a global meeting of athletes in the middle of a pandemic that is not yet under control.

"The Olympic Games is supposed to bring together people for peace, bringing different faiths and cultures together, to understand each other and to enjoy each other's company," she said. "It's not to bring them together to potentially die."