Balancing tradition and protest in Borneo Members of Pangrok Sulap and friends with a print made for the Rhythms of Rimba conservation festival in 2014 (Photo by Tom Vater)
TOM VATER and LAURE SIEGEL, Contributing writersMarch 9, 2016 15:00 JST | ASEAN
CopyCopied

KOTA KINABALU, Malaysia -- Rizo Leong, a 31-year-old Malaysian artist, recalls how members of Marjinal, a Jakarta punk rock band and art collective, taught him the basics of woodblock printing while they were on tour in Sabah, part of Malaysian Borneo, in 2013. "They inspired me and my friends to form an art collective. It was great to suddenly realize what we could do if we mastered this technique," he said.

Leong is one of the founders of a Borneo art collective called Pangrok Sulap. He and his wife Memet have transformed their home, a former school in the sleepy mountain village of Ranau, into an open plan studio. The mainly agricultural community attracts tourists because of its proximity to Mount Kinabalu, one of Southeast Asia's highest peaks, which is a popular trekking spot. But Pangrok Sulap provides an incongruous and colorful exception to the rural setting, serving as a dedicated space for the region's artists.

The collective's name is a combination of the local pronunciation of the English words "punk rock" and the word for a traditional farmer's hut in Kadazan-Dusun, a language spoken by some of the indigenous people of Sabah, who make up a third of the state's population of 3.2 million. Leong is half-Chinese and half-Murut, the last of Sabah's ethnic groups to have renounced headhunting. From the outset, cultural identity and local issues were at the heart of Pangrok Sulap's artistic ideas.

"We want to get the local people interested in local politics through visual art. We want to inform them about what's happening on their land. We question the notion of citizenship," Leong said.

The collective now regularly exhibits its art across Malaysia and collaborates with local authorities. For example, Kundasang, the town closest to Mount Kinabalu, offered the collective a wall in the city center to create a mural in memory of several Malaysian mountain guides who died in an earthquake last June. Last year, Pangrok Sulap joined "Being Maphilindo," a group exhibition held at the Sabah Art Gallery in Kota Kinabalu, the capital of Sabah state. The exhibit formed part of the "New Curatorial Constellations," a series of exhibitions organized by the Japan Foundation, a Japanese cultural institution, in Indonesia, the Philippines, Thailand and Malaysia.

"Maphilindo is a long-forgotten plan to create a confederation between Malaysia, Indonesia and the Philippines. It was buried after only one month by the Konfrontasi policy of Indonesian President Sukarno toward Malaysia in 1963," said Leong, referring to a period of hostile action against Malaysia instigated by Indonesia's autocratic first president. "We produced a print that explored who might have been president of this imaginary state. Like all presidents, this leader would have had to deal with democracy, liberty, fascism, [and] anarchism as well as issues like corruption and monopolies."

The Mori Art Museum in Tokyo subsequently acquired some of Pangrok Sulap's artwork, which attracted further interest in the collective in Japan, to Leong's surprise. In late February, Leong went to Tokyo to present the collective's new exhibition, "From Foot of Mt. Kinabalu to Foot of Mt. Fuji."

Risa Tokunaga, a lecturer at Tokyo University of Foreign Studies who organized the collective's visit, said she had come across Pangrok Sulap's work in 2013 through her connections with Malaysia's alternative art scene. "Their style is influenced by Taring Padi from Yogyakarta, my favorite woodblock print art collective, well-known for their radical work during the Reformasi," she told the Nikkei Asian Review, referring to a period of reform that followed the ouster of Suharto, Indonesia's autocratic second president, in 1998. When Tokunaga visited Sabah in 2014, she recalled, "I became very curious to find out who they were, and was able to stay with them for a few months. I was amazed by this new young artist group. Eventually I became part of the Pangrok Sulap collective."

When she left Sabah, Tokunaga took a dozen artworks with her. She introduced Pangrok Sulap's work at an exhibition in Tokyo in November 2014. "My students connected quickly to the themes that Rizo and his friends explored -- the lives of those still living in Borneo's rain forests, the displacement of villagers by megadam projects, the need for free and accessible education, and the questionable effects of tourism."

Tokunaga said those interested in the history of woodblock art and print art in social movements in Asia would appreciate Pangrok Sulap's art. "Woodcut prints (hanga) have a long tradition in Japan. We learned about hanga in primary school. Historically, woodblock printmaking was a popular medium for people engaged in political resistance. Lu Xun, a writer and lecturer in 1920s and 1930s China who created work protesting imperial Japan's aggression, and Hong Song-dam from South Korea, who used the medium to discuss the Gwangju uprising against the military regime in 1980, are shining examples of what is categorized as a people's art movement," she said.

Beyond the appreciation for wood cut techniques, Tokunaga sees Pangrok Sulap as central to the region's emerging art scene: "They work as a collective, they have a strong connection with local communities, and they follow a DIY [do it yourself] ethos, which influences many aspects of underground culture across Malaysia and Indonesia."

In the footsteps of the DIY movement, which blossomed on U.S. university campuses in the 1970s, Pangrok Sulap produces clothes, posters, jewelry and books to provide a homegrown cultural response to industrial mass production. 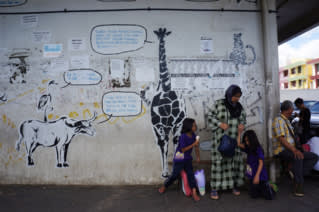 Pangrok Sulap creates most of its projects spontaneously, always following the same strategy -- one cause, one project. Its artists have sold prints to support thousands of families evacuated from their homes after floods in 2015; promoted kirai asli -- cigars hand-rolled by tribal people to combat the sale of contraband cigarettes by illegal immigrants; and launched a campaign against the so-called "Project IC"-- the name given to allegations that identity cards were issued to migrants in Malaysian Borneo in exchange for their political support. The collective has also campaigned to raise awareness of the struggles of Filipino and Indonesian migrant workers whose children cannot acquire citizenship.

To spread their messages, the collective's members travel widely. Their current campaign is in the Ulu Papar valley, home to about 1,000 people whose villages will be affected by the Kaiduan dam project to supply water to Kota Kinabalu. The collective traveled to the area to support the protests, helping local people fight for their land or for compensation. To celebrate the Borneo Rhythms of Rimba Wildlife Festival, a local conservation festival held in 2013, Leong produced one of his most striking woodcut prints. It depicts a group of orangutans sitting in a recently logged forest. One is holding a palm leaf over the head of a distraught man, sitting on a trunk, a chainsaw at his feet. Since the 1990s, logging has wiped out 80% of the rain forest on Borneo, the world's fourth biggest island, which is shared between Indonesia, Malaysia and Brunei. This industrialized destruction has had a catastrophic effect on endangered species and the environment; fires used for forest clearance continue to produce deadly atmospheric pollution.

Pangrok Sulap is part of a larger artist group, the Tamu-Tamu Collective. Together, the groups organize cultural events, share booths at art markets and run workshops across Malaysian Borneo. One Tamu-Tamu member, Eleanor Goroh, researches the history of beads. "Sabah has a vivid beads culture," said Goroh, a jeweler and regular visitor to Leong's studio. "There's an incredible diversity. I'm convinced that if one appreciates small things in one's culture, one will defend his land."

But changing consumer habits is a slow process. "People are not ready to pay for quality items made locally when those same items are marked 'Made in China' and [are] three times cheaper at the market. It's difficult to get people to appreciate that local artisans produce traditional art and that they need to sell it to preserve our culture, and to survive. And unfortunately, young people don't want to spend time learning old practices and old people don't see the point to keep these practices alive. So we are doing just that," she said.

Haizum Alban, another jewelry maker, said of her generation's need for change: "Between independence from the British and the integration of Sabah state into the Federation of Malaysia [in 1963], we were independent for 17 days. We never had a chance to see what we could be. We think that voting is not enough, that the elections are not the solution to everything. We want to explore new concepts of citizenship and local democracy."