It's what's on the inside that counts: A duck is stuffed with the special mix of spices necessary to create the Indonesian delicacy bebek betutu. (Ian Neubauer)
IAN LLOYD NEUBAUER, Contributing writerFebruary 28, 2020 11:30 JST | Indonesia
CopyCopied

UBUD, Indonesia  -- "No question about it, this is the best pig I have ever had. Absolutely the best. You think even the finest French chef could ever come up with anything as delicious or as beautiful as this?"

When the TV chef Anthony Bourdain uttered these words while filming in Indonesia in 2006, he turned babi guling -- Balinese pig roasted on a spit -- from a local favorite into a global delicacy.

There is, however, another Balinese dish that rivals or even exceeds babi guling: bebek betutu -- roasted leaf-wrapped duck. Richly seasoned with chili, ginger, candlenuts and garlic, this melt-in-your-mouth masterpiece upstages the flavor profiles of China's Peking duck, France's confit de canard and every duck dish ever conceived, according to many prominent food judges.

"The duck meat was black and moist and so tender that it fell from the bone with a touch. It was so delicious and entirely unlike anything I had ever eaten," wrote Sri Owen, the Indonesian food writer credited with introducing her country's cuisine to the world, after she sampled bebek betutu for the first time in 1962.

Nicholas Jordan, a Sydney-based food writer, voiced similar sentiments after recently discovering the dish in Bali: "It's one of the few things I've eaten in my life that's so good it's taken up a mythical status in my mind ... something so beyond regular deliciousness it shouldn't exist without some sort of paranormal ingredient." Bebek Betutu as prepared at Murni's, one of several restaurants in the Balinese town of Ubud specializing in the dish. (Courtesy of www.murnis.com)

To learn more about bebek betutu I traveled to Ubud, the Balinese spiritual hub made famous by Elizabeth Gilbert's bestselling memoir "Eat, Pray, Love" and the 2010 film based on the book. Now a booming tourist town with a cosmopolitan dining scene, Ubud has several restaurants that list bebek betutu as a signature dish. Among them is Murni's, where duck legs are plated with pyramids of yellow rice and a spicy green bean and shredded coconut salad called lawar. With a lightly sweet and herbal finish, the recipe has not been altered since Murni's opened in 1974.

Indus, a restaurant overlooking a coconut tree-fringed river valley owned by Australian-Indonesian culinary icon Janet DeNeefe, is also known for its bebek betutu, though it must be ordered as a whole bird for two or three people to share. 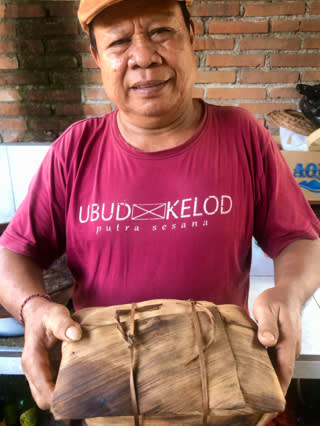 Aperitif, an extravagant 1920s-style restaurant that cost $2 million to build at the luxury Viceroy Bali resort, offers an East-West interpretation of the dish: duck magret (the boned breast of a duck reared for foie gras) injected with bebek betutu spice mix in place of orange sauce.

But according to Astrid Maharani Prajogo of Good Indonesian Food, a culinary tour company, the best bebek betutu is not found in any restaurant. It is made by specialists who work from home and supply locals with ducks for Hindu ceremonies, celebrations and Sunday roasts.

"There are lots of these duck specialists in Bali," Prajogo says. "But the one I always take my clients to is Pak Rimpin near the Royal Palace in the center of Ubud. I went there because someone told me his duck was the freshest."

"They're all very good at what they do ... but with Pak Rimpin, it was his idealism that struck me ... his desire to preserve the culinary tradition. He was very keen to open up his kitchen and share his recipe and stories with tourists." She adds: "It's also where the royal family of Ubud get their bebek betutu."

The labyrinthine streets and alleys of Ubud are still semi-deserted at 8 a.m. when I arrive at Rimpin's home, a traditional Balinese compound with intricately decorated stone gates and Hindu shrines. There I find the specialist at work in a central courtyard kitchen filled with cooking aromas and shards of bouncing light.

Rimpin's bebek betutu must be ordered at least two days in advance. Normally he cooks between 15 and 20 a day, but today it is relatively quiet; he is making only four, plus an order of duck satay sticks. When I ask his age, he consults quickly with his daughter-in-law Junek, who tells me he is "about 60." He has been cooking duck "since the 1980s" and learned the craft from an older brother. "I asked him to stop working because he's getting old and the work is exhausting," Junek says. "But he won't listen." Before cooking the duck, Rimpin wraps it in betel-nut bark, which contains natural oils to further enhance the flavor. (Ian Neubauer)

Rimpin sighs and turns his attention to the four ducks soaking in a pail of water. He chooses one, rinses it dry and starts massaging it with a marinade of coconut oil, fermented shrimp paste, soy sauce and salt. He also adds tamarind paste to the blend to neutralize the naturally unpleasant odor of duck meat.

He then stuffs the bird's cavity with a handful of bay leaves and bumbu -- Balinese for "spice mix" -- which in this case also contains sesame seeds, galangal and pepper. "There's no secret recipe. If people think my bebek betutu tastes good it's because of the attention to detail. I make them one at a time," he says, wrapping the bird like a birthday present in betel-nut bark, which contains natural oils to further enhance the flavor.

Next, he takes the package to a room blackened by decades of soot with a series of raised mounds for cooking on the floor. He places the package in a steel wok, covers it with a second wok, rests it on one of the mounds and then covers it with a 30-cm-tall pyramid of rice husks. Finally, he tops the pyramid with a few coconut husks, adds a few squirts of kerosene and sets it alight. Top: Rimpin places a duck in a rice husk oven. Bottom: Coconut husks go on top of the rice husk to force the heat down. (Ian Neubauer)

The term "betutu" refers not to the recipe but to the use of rice husks -- a time-consuming cooking process that gives the ducks cooked by specialists a robust flavor. The ducks are baked in these medieval-style ovens for a minimum of five hours, although Rimpin cooks his for 12 hours.

"You get this dry roasting effect similar with steaming and braising that commercial kitchens designed 1,000 years later still can't replicate," says Will Meyrick, an expatriate chef from Scotland who teaches tourists how to make chicken betutu, a popular variant, at the Canggu Cooking Retreat on the coast. "All the spices and ingredients get broken down into this rich juice and the flavor is amazing."

Rimpin's customers normally eat his bebek betutu at home. But I want to taste it straight out of the oven and unwrap my parcel in the middle of his kitchen. As the bark curls open I am struck by an aroma so complex it seems to possess texture. Straight out of the oven: The aroma is so complex it seems to possess texture. (Ian Neubauer)

The meat at the top is golden-yellow from the turmeric and black on the inside from the spice mix. I collect some on a fork, mop up some of the golden juice, and take my first bite. The flavor is so remarkable it speeds my heartbeat for a few moments. As much as I try, I can't find the words to describe what I am tasting.

"What words would you use to describe the emotion of hearing 'I love you' for the first time, or the sensation of the sun on your face after a month of winter rain?" says Jordan. "How do you describe one of the best things you've ever eaten?"