DESA BAN, Indonesia -- On the wall of East Bali Bamboo Bikes' workshop in Desa Ban, a big yellow sign declares: "Safety First." Just around the corner, a starker warning has been pinned to the roadside: "Volcano Hazard -- No Entry." Now abandoned, the site is just 6km away from the crater of Mount Agung, which has been threatening to erupt since September. Even now, the volcano is still spewing ash into a halo of storm clouds, and the ground still shakes now and again.

The social enterprise, which makes bamboo bicycles for the tourist industry, was founded just over a year ago by a local nongovernmental organization, the East Bali Poverty Project. The aim, EBPP's founder David Booth said, was to provide a new source of sustainable income for communities in one of the poorest parts of the island. "It's not just about getting the [people] health and the education," he said. "You've got to create sustainable futures."

The business has had to move twice since the volcano began to rumble, first to the capital Denpasar and now back to a newly constructed evacuation camp in Desa Ban, outside of the danger zone. Production has been interrupted as the operation has been dismantled and restarted, and as workers and their families have had to move in and out of camps.

The authorities have progressively dialed back the threat level, and did so again in February, but the threat of an eruption has cast a long shadow over Bali for more than five months. Disrupted flights and canceled holidays over the normal high season for tourists have hit the hospitality industry, which is the biggest contributor to the island's gross domestic product.

Back in December, Indonesia's Minister of Tourism Arief Yahya warned that the economic impact of the Mount Agung emergency could be in excess of $650 million. However, the overall social and economic fallout will be deeply felt far beyond the island's world-famous tourist resorts, exacerbated by lingering uncertainty over whether it is really drawing to a close. East Bali Bamboo Bikes has had to move its workshop twice since the evacuation notice. (Photo by Peter Guest)

In total, more than 140,000 people were evacuated from a 12km radius around Mount Agung. By late February, almost all of them had been told it was safe to go home; many of them are returning to livelihoods that have been profoundly disrupted.

In a schoolhouse in Cegi, one of the closest villages to the crater, teacher Wayan Yasa said that he is still waiting for the eruption despite the government's "all clear" signal. Like many of his neighbors, Yasa sold his livestock at a knock-down price in the panicked few days after the evacuation notice came through. He has some cash leftover to start again, but is reluctant to do so until he can be certain he will not have to flee again.

"It will take four or five years before we get back to normal," said Ketut Tunas, a community leader from the neighboring village of Pengusalam. 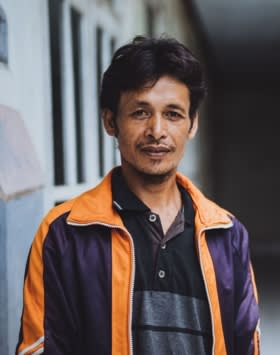 Schoolteacher Wayan Yasa from Cegi, close to the crater, said he and many others had to sell their livestock. (Photo by Peter Guest)

The notion of "normal" is still a far cry from the relative affluence of the resort towns of southern Bali. The road network that crosses the saddle between Mount Agung and Mount Batur and links up with the coast was only completed last year, and some of the higher-up settlements are still connected to it by deeply rutted dirt tracks.

When Booth arrived in the late 1990s, this area of East Bali was among the poorest in the entire Indonesia, with shockingly high child mortality and enduring problems with malnutrition. The education system was moribund and most other services were all but nonexistent. Incomes, such as they were, were derived from walking livestock for hours along treacherous mountain paths to markets.

Booth's EBPP has operated there for more than 20 years, and Desa Ban now has functioning, if basic, schools, water sources, healthcare workers and a network of roads and bridges that mean they can bring vehicles in and livestock out. Trail bikes are now ubiquitous, used to carry forage for cattle and take children to school. Families had accumulated small herds of cattle that they use to store wealth and from which they derive an income. That progress is now in jeopardy.

Uncertainty is a large part of the problem. Komang Kurniawan, EBPP's chairman, said that some people have given up on Desa Ban and found jobs in the cities, others are running down their cash reserves as they wait. Villages high up on the side of Mount Agung may struggle to return to normal life for years to come. (Photo by Peter Guest)

Few people believe the threat has entirely subsided, and there is a persistent suspicion, voiced by some members of the development and humanitarian community in Bali, that the decision to scale down the emergency was a political one designed to take the pressure off the tourist sector. Echoing others who spoke to the Nikkei Asian Review, Ade Andreawan, director of IDEP, a local sustainable development NGO that has been supporting evacuees with basic needs and training, said: "The Gunung [Mount] Agung status is decided by tourism, not the scientists."

That has left the humanitarian sector in limbo too. Eko Wardani, from PMI, the local chapter of the Red Cross and Red Crescent, said that the organization now has to send staff into an area that it does not believe is safe in order to look after the interests of returning evacuees. "We don't want to have any activity in [the danger area], but there are humanitarian issues there. If the Red Cross isn't doing services there, then how will they live?" he said.

PMI is supporting some communities with cash transfers to help them to get back on their feet, and is rehabilitating the unoccupied evacuation centers to make ensure they are ready to be used again. EBPP is also staying prepared. In its newly finished evacuation center, mattresses, still in their plastic wrapping, are stacked up in the empty dormitories.