Vinegar on the menu as entrepreneur battles alcohol sales restrictions 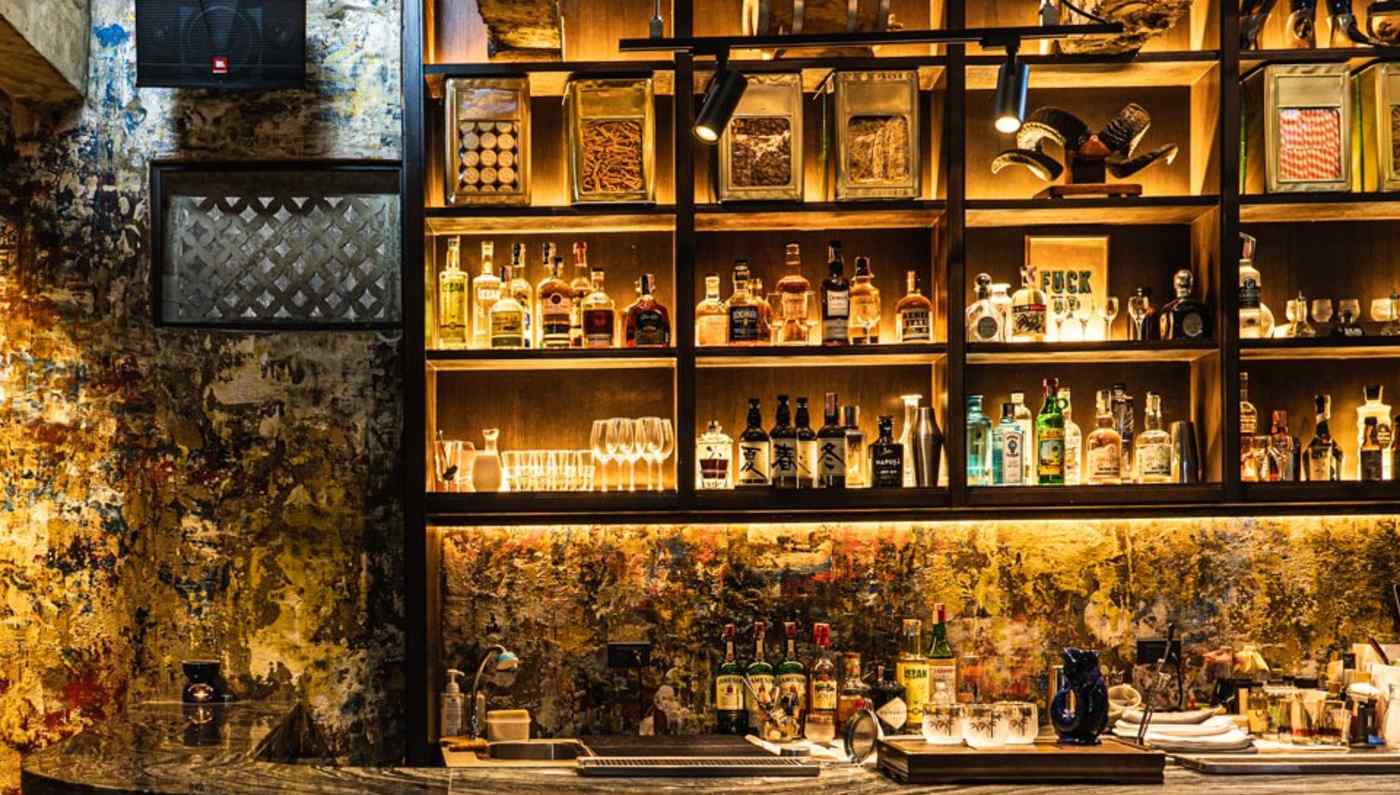 BANGKOK -- "Nothing is certain but death and tax," reads the sign above a dimly lit staircase in a small alley on the edge of Bangkok's Chinatown. Other certainties of life include birth, sunrise, and, if you are a bar owner in Thailand, a constant battle with the government's ever-tightening alcohol laws.

With tourism at a standstill and opening hours and lockdowns dictated by officials, the COVID-19 pandemic has been challenging for Thailand's hospitality industry. The city's many bars, in particular, have had a lot to endure. They saw their home deliveries -- one of the few ways to generate income during lockdown -- come to a halt when the government introduced a blanket ban on alcohol sales in April, and were the last industry branch allowed to reopen, after almost three months of enforced closures, in July.

Even without lockdowns and booze bans, the industry faces daily hurdles. Bar owners caught advertising their drinks risk fines of up to 500,000 baht ($15,970) under section 32 of the Alcoholic Beverage Control Act. Introduced in 2008, the law prohibits the direct and indirect advertising or display of alcoholic beverages, identifiable bottles or drink logos. Though enforced only sporadically, it has been used to fine celebrities for showing beer bottles in Facebook posts, and bar owners have been prosecuted for promoting their wares online. The government banned online sales completely in December 2020.

Among those fined for advertising was Niks Anuman, the entrepreneur behind the bars Teens of Thailand and Asia Today, both located along Soi Nana, Chinatown's avant-garde nightlife strip. In April last year, the Alcohol Control Board summoned him for questioning about a social media post that referred to his bar's home delivery service. A fine followed, and the profits derived from the bar's drink deliveries ended up in a Public Health Ministry bank account.

For Niks, it was the proverbial last drop. "The 50,000 baht fine for posting about alcohol is higher than the penalty for drinking and driving," he says. "Even if you get caught with marijuana, the fine is often only 10,000 baht. It just doesn't make sense. A good state is supposed to support businesses in these trying times -- instead, they're trying to kill the industry." 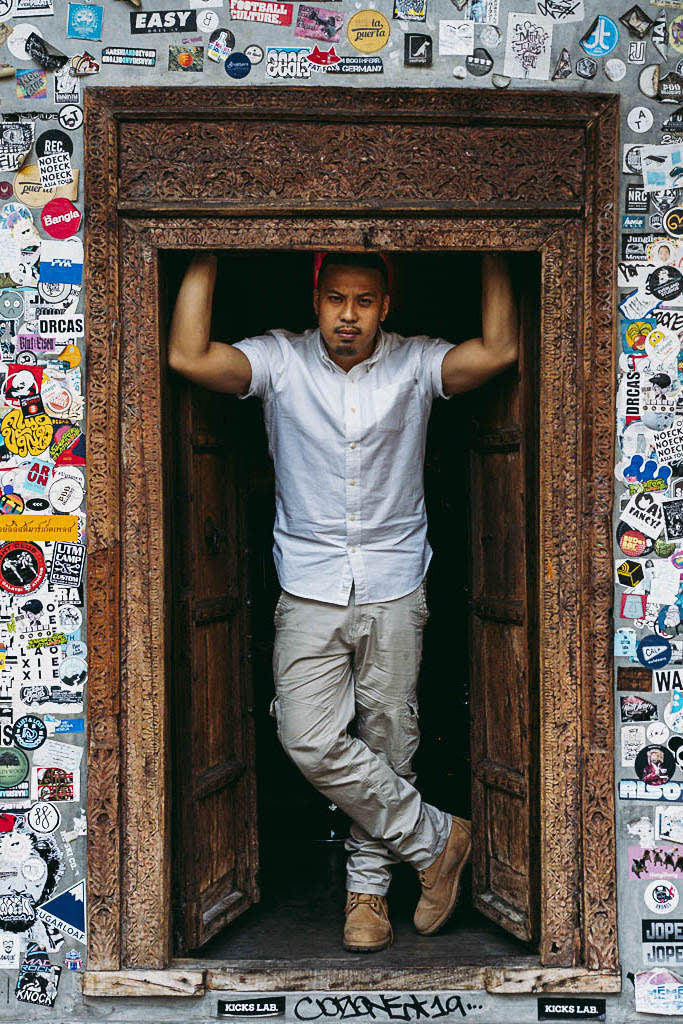 Together with fellow bar owners and representatives of the spirits and liquor industry, Niks founded the Art & Culture of Alcoholic Beverages Association of Thailand to campaign against Thailand's alcohol regulations. The group protested alongside members of the Craft Beer Association and the Network of Thai Alcoholic Beverage Producers, calling for an amendment to Section 32, and collected more than 10,000 signatures for a petition seeking a parliamentary debate.

"[Bars] basically pay taxes for the government to come up with more laws to prevent us from making a living," Niks says, noting that the industry is also subject to "sin taxes" levied on alcohol sales to fund anti-drinking campaigns by the Thai Health Promotion Foundation. "I think that if you're taxing us, you should give us the freedom to do business so we can actually pay taxes -- but they're squeezing the blood out of the craft."

One thing the government does not tax is vinegar, which takes center stage at Niks' latest venture, Tax Bar, which opened in November. Taking over the lofty top floor of a walk-up just off Soi Nana (signposted by the "death and taxes" quotation, attributed to Benjamin Franklin, an 18th-century American politician and inventor) this cocktail bar mocks the alcohol regulations by incorporating house-made drinking vinegars in its signature drinks. 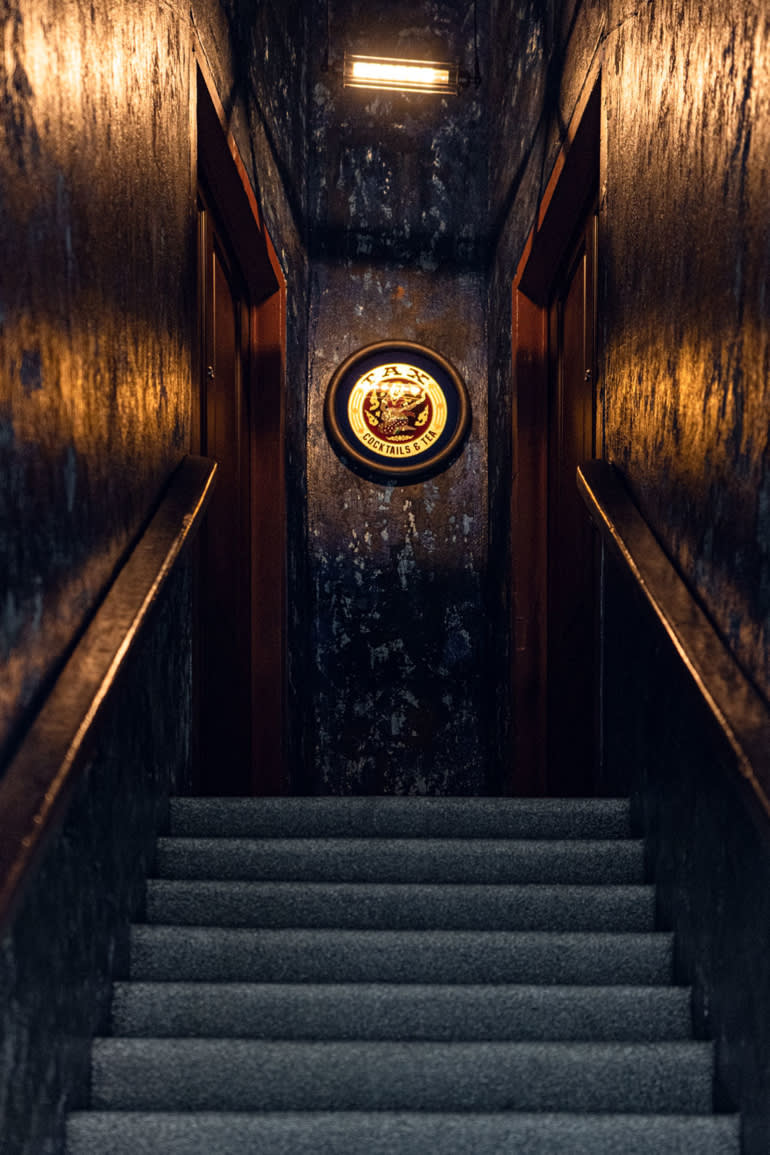 The stairs leading up to Tax Bar. (Photo by Chris Schalkx)

"A wine or lager vinegar is entirely legal, because it contains no alcohol," Niks says. "But the production process is a grey area. They'd have to catch me while I'm making it, though. And technically, I'm only making wine go bad."

With just 10 tables, the Tax Bar feels like a hush-hush affair. The interior resembles a dive bar, with exposed concrete ceilings and walls covered in paint splatters as if the abstract expressionist painter Jackson Pollock had been drinking there all night. A logo resembling an official government emblem welcomes customers at the entrance. Beside the bar hangs a framed piece of graffiti -- part of a Thai homonym poking fun at a prominent government figure.

The vinegar production, however, happens at an undisclosed location elsewhere in the city, "just to be on the safe side," Niks says. "We will play by the rules, but everything we do will scream: '[These laws] don't make any sense!'" 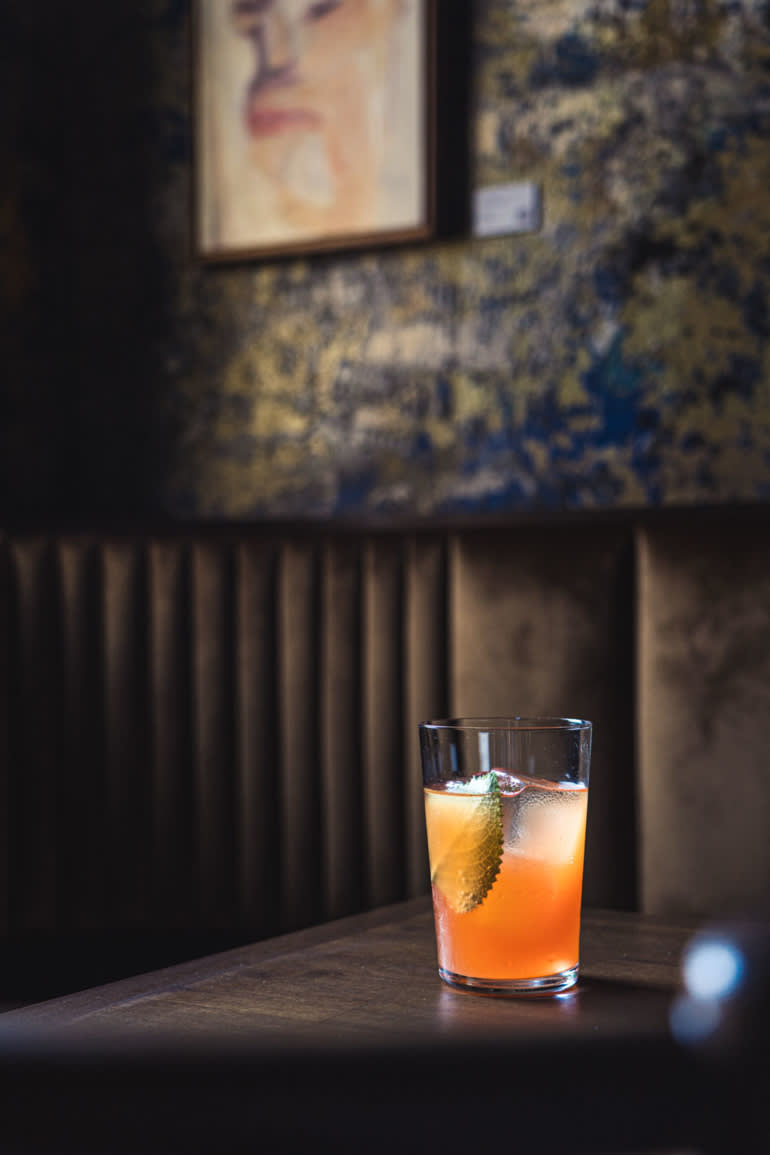 The vinegars used in Tax Bar’s cocktails lend an umami-rich touch to complex drinks that take inspiration from the kitchen. (Photo by Chris Schalkx)

Political nose-thumbing aside, the Tax Bar feels like a logical next step in Niks' repertoire. Gin-and-tonic infused with Thai tea and chrysanthemum at Teens of Thailand, his first bar, got him noticed in 2016. Drinks with foraged local ingredients such as wild honey and pickled elephant garlic followed at Asia Today, where a pink neon sign behind the bar reads, "This bar is better than Teens of Thailand." Tax Bar is more grown up. "Anyone can make a sweet and sour drink with flowers on top," Niks says. "It might look nice on Instagram, but at Tax Bar we really try to challenge people's palates."

While the use of vinegar in cocktails is not new, Tax Bar's drinks list ventures far beyond the typical dash of apple cider vinegar or the fruity notes of a vinegar shrub. Made from white wine, stout beer or champagne, the vinegars lend an umami-rich touch to complex drinks that take inspiration from the kitchen.

Head bartender Pratch Thongcharoen, who started his career as a chef, mixes white wine vinegar with bell pepper-infused vermouth and cumin shrub for a well-rounded drink with hints of passion fruit and mint. The lager vinegar is mixed with rum, wild honey, celery bitters and shrimp paste-infused coconut syrup for a savory-sweet hit. The menu will change over time -- batches of vinegar from sake, mead and coconut cider are planned -- but all drinks highlight the unique characters of each brew, devoid of the mouth-puckering tang associated with vinegars. 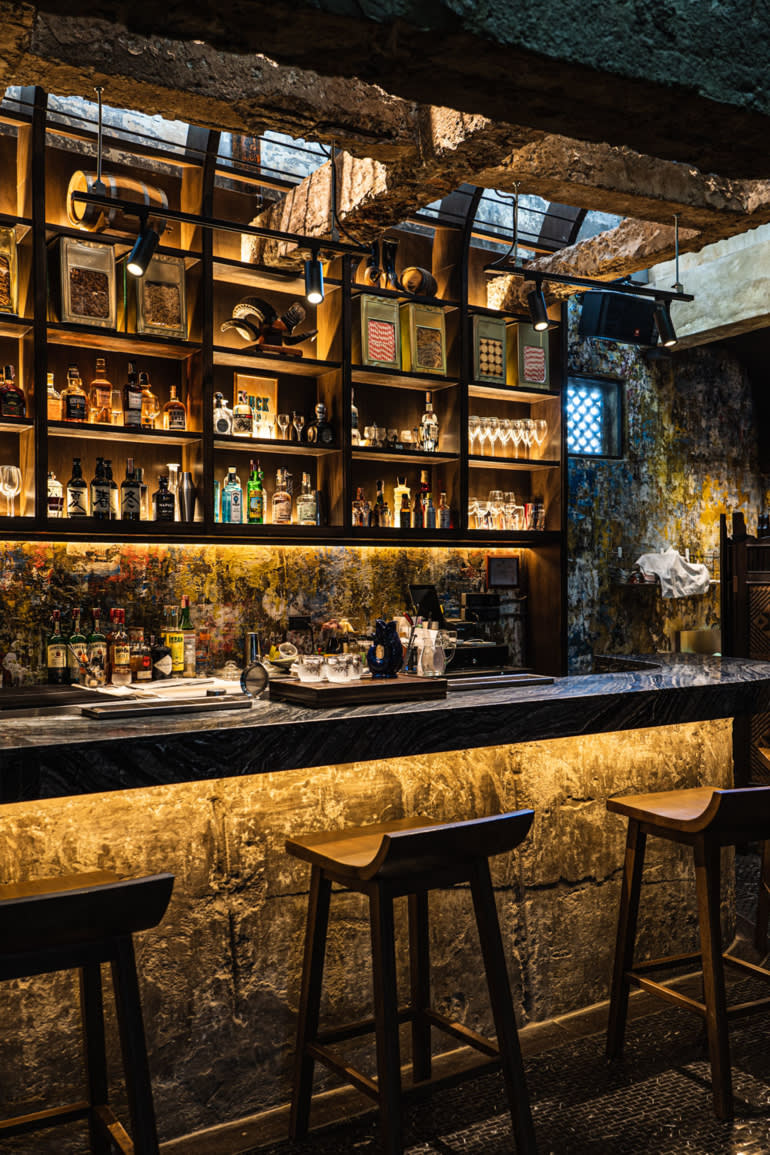 “Anyone can make a sweet and sour drink with flowers on top,” Niks says. “It might look nice on Instagram, but at Tax Bar we really try to challenge people's palates.” (Photo by Chris Schalkx)

Just six weeks after Tax Bar's opening, another lockdown forced it and other bars in Bangkok to close again in January. Niks started selling shumai dumplings from a makeshift kitchen in front of his bar to keep his staff on the payroll. Faced with yet another setback in an industry notorious for its razor-thin profit margins, did he ever think about throwing in the towel?

"If it was just myself, I'd be drinking beers at the beach already," Niks says. "But I have a passionate team relying on this line of work and willing to do anything to get started again. I can't give up on them, and we can't just rely on the government to support them, because it's hopeless to rely on this government."

Tax Bar reopened at the end of February, but Niks remains determined to keep speaking out. "The fight is never over," he says. "If we stop, the government will come up with other ways to oppress us. We have to be on guard all the time."