Bangkok enclave celebrates its Portuguese past

Kudichin displays to visitors a little-known chapter of Thai history 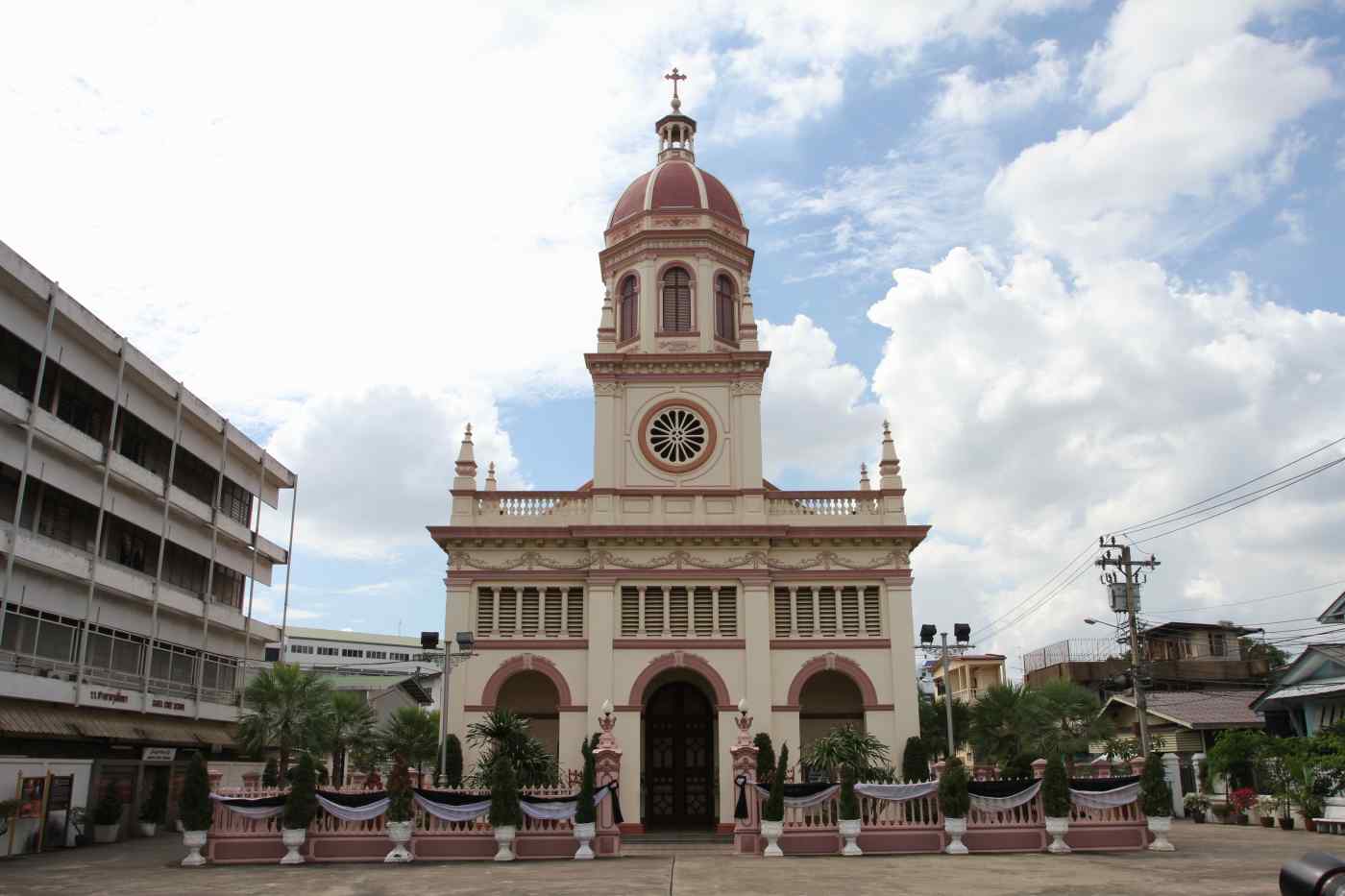 BANGKOK -- King Taksin had a problem shortly after he assumed the throne of Siam in 1767. He had driven out the Burmese invaders after they sacked the capital of Ayutthaya, but so terrible was the destruction that the city was an uninhabitable expanse of smoking ruins.

Taksin's predecessor, Ekkathat, had been found dead of starvation in the forest. The country's unruly provinces, always loosely governed from Ayutthaya, were beginning to break away under the leadership of ambitious governors and rogue monks.

To save Siam, until recently one of the great Southeast Asian nations, Taksin needed a new capital city in which to base himself and his armies.

Ayutthaya was located on the wide Chao Phraya River, the country's main waterway, running from north to south and emptying into the Gulf of Siam. About 80km downstream from the ruined capital lay the garrison town of Thonburi at a strategic bend in the river and only a day's sailing from the sea. Windsor House, one of the oldest structures in Kudichin (Photo by Ken Barrett)

Here was where the ships deposited their cannon and paid their customs duties, which gave Thonburi its name, which roughly translates as "Money Town."

The town, now a district of the present-day capital of Bangkok, was on an island protected by a wall and large fortress and was home to a thriving community supported by extensive farmlands and a system of canals to transport produce through the surrounding marshy delta country.

Thonburi was not perfect since the enclosed area was small and had an alarming vulnerability to river erosion; yet, it occupied a relatively safe location. King Taksin proclaimed it his capital, and it was in Wang Derm Palace, adjacent to the fortress, that he was formally crowned king on Dec. 28, 1767.

The survivors of Ayutthaya's destruction -- those who had not been slaughtered or marched back to Burma as slave labor -- migrated to the vicinity of Thonburi. Besides Siamese, they included Persian merchants, Indian traders, Muslim craftsmen, Chinese farmers and a number of Portuguese.

The Portuguese presence was an anomaly. Due largely to the machinations of the French, there had been an uprising against the Western presence in Siam in 1688 and almost all of the Europeans had been ejected. But the Portuguese had been allowed to stay.

Portuguese adventurers had been the first Westerners to arrive in Siam, sailing up the Chao Phraya in 1511. They had brought with them guns and highly effective military techniques. They were also skilled administrators. By the time of the great expulsion of foreigners, the Portuguese were an integral part of Siamese society, able to supply weaponry from their colonies in Goa and Macau. They also held many influential positions in the court of Ayutthaya.

They had proven to be valuable allies to King Taksin, their cannon and muskets contributing greatly to his army's power and his success in driving out the Burmese. When the Portuguese arrived in Thonburi the king granted them their own enclave on the riverbank.

The king visited the Portuguese community on Sept. 14, 1769 and gave permission for the construction of a Catholic church. The date marks the Feast of the Triumph of the Cross and so the church was named Santa Cruz, or Holy Cross.

The descendants of these Portuguese settlers still live on the same land today in a neat village that has remained entirely Catholic and regards the Santa Cruz church as the center of the community. "There are almost 200 families here," said Navinee Pongthai. "The Catholic diocese owns the land, and we pay rent each year to the church. All of us are Catholics."

Navinee has lived in the community all her life and is descended from the original settlers, who comprised 79 soldiers and administrators along with their families, according to local folklore.

The community is known as Kudichin, a combination of the Thai words kudi, meaning a building where monks live, and chin, meaning Chinese.

Navinee explained that King Taksin had granted the neighboring parcel of land to Hokkien Chinese settlers and that they had built two shrines there. Monks had resided at the shrines, and the small canal that divided the two neighborhoods was known as Klong Kudichin.

The shrines had since fallen into disrepair and were replaced by a single temple to the goddess of mercy, Kuan Yin. The monks and many of the Chinese residents had already left when the enormous compound of Wat Kanlayanamit, a Chinese Buddhist temple, was laid out. But the name Kudichin had lived on.

There are no roads, only alleyways. The prettiest route to the village is along the concrete riverside walkway that leads from the green-painted Memorial Bridge. Access is also available by a ferry from the opposite riverbank to the community's own pier.

Navinee and her family are hoping to bring more attention to the district by opening their Baan Kudichin Museum, which is housed in one of the old timber homes that the family owns and is entirely funded by them. 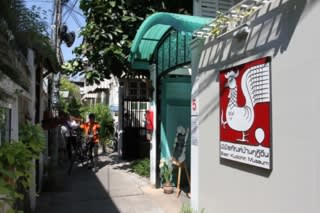 The entrance to Baan Kudichin Museum (Photo by Ken Barrett)

The family are not business people: Navinee was a university administrator before she retired, and her husband is a civil engineer.

So why a museum?

"I love museums!" she said. "We have so much history here but it has never been collected in one place, and anyone who's interested doesn't really know where to find out."

The museum is still a work in progress and will not be completed until the end of this year, but it is open and already attracting walkers and cyclists.

The family intends to maintain free admission, with funds provided by a coffee shop on the ground floor, which occupies a graceful space that is partly open to the river breezes and a small courtyard with a shrine.

On the two floors above the cafe, exhibitions explain the reasons the Portuguese came to Siam, their support for King Taksin, and the founding of Kudichin.

The rooms show the traditional manner in which a Kudichin family lived and includes household utensils and family photographs. There is also an account of the Kudichin Ghost, a friendly apparition that parents warn will appear to any child playing out in the lanes after 6 p.m., when the church bell has tolled. On the roof sits an observation deck, offering views of the river, the church and Wat Kanlayanamit.

The house is around 70 to 80 years old, says Navinee. A fire destroyed part of Kudichin in the 1940s, but the houses were replaced by similar structures in wood. One surviving structure is Windsor House, thought to date from the 1850s and built by a wealthy British merchant named Louis Windsor. Constructed from golden teak in the gingerbread style known as Ruen Manila, the house is blackened with age and totters on the riverbank, a picture of decrepitude.

The narrow alley that runs beside the Baan Kudichin Museum also contains other reminders of the community's Portuguese past. The Thanu Singha Bakery, which has been owned by the same family for five generations, offers a light and crumbly cake, known as khanom Kudichin.

The cake owes its origins to the Portuguese who settled in Ayutthaya. They had to adapt their eating habits to the ingredients that were available. In trying to recreate their native sponge cakes without the use of yeast and other ingredients, they used duck eggs, wheat flour and brown sugar.

Teepahorn Sudjidjune, the current owner, says the cakes are made according to the ancient recipe in the shed-like bakery, where electric fans swirl the heavy, aromatic air. Along with another nearby bakery, he serves the Kudichin community with its favorite pastry, while for visitors he has recently opened a little cafe in the corner of the premises.

Thonburi did not remain the capital of Siam for long. King Taksin faced enormous challenges and perhaps the stress resulted in signs of his mental derangement. With Siam nearly ungovernable, Thong Duang, the kingdom's highest-ranking nobleman, decided to remove the king.

The generally accepted version of history is that the king was taken to the Temple of the Dawn, placed inside a velvet sack and beaten to death with a sandalwood club, the traditional method of execution for anyone of royal blood. But some tales suggest that he was instead secretly removed to a remote temple in the mountains of Nakhon Si Thammarat, where he lived to a ripe old age. Whatever happened, the reign of King Taksin ended on April 6, 1782.

Thong Duang succeeded him and became the founder of the Chakri Dynasty that rules Thailand to this day. King Rama I, as he became known, decided that Thonburi was not suitable for the powerful kingdom he had in mind. The opposite bank of the river, an expanse of marshland and orchards that was known as Bang Kok, after the kok or makok plums that grew there, offered enormous potential and was impregnable.

On April 21, 1782, the stakes were driven into the soil of Bangkok for the City Pillar. Thonburi dwindled into insignificance, while Kudichin lapsed into a quiet resting place in the sunshine.