After years of neglect, plans for more parks and trees are taking root in Thai metropolis

BANGKOK -- Branch by branch, trunk by trunk, Thailand's urban tree advocates are fighting to turn back a tide of concrete. Decades of unfettered development has left Bangkok with one of the lowest per capita ratios of public green space among big cities in Asia -- 7 sq. meters per resident, below the 9-sq.-meter minimum recommended by the World Health Organization. Singapore has 66 sq. meters.

The odds do not favor Bangkok trees. Parks are few. Plenty of underused urban land is held by the government and could be converted to green space. But state landowners such as transport operators, utility companies and the military treat this property as their own, rarely shedding spare plots except for sale to developers.

Landowners sometimes view greenery as a nuisance. Trees are often pruned close to the stump, lest any hazardous branch should fall. A lack of professional tree surgeons -- also known as arborists -- has priced proper tree care beyond the reach of many landlords, especially in the public sector. In particular, the Bangkok Metropolitan Administration, the largest custodian of trees, has often sparked public outrage over drastic hacking of roadside trees.

Yet, thanks to 10 years of efforts by activists, designers, progressive officials, businesses and, increasingly, the BMA, the tide may be turning. Last year, the city's military-appointed governor, police Gen. Asawin Kwanmuang, joined civic groups and businesses to announce Green Bangkok 2030, a major initiative to increase green space to 10 sq. meter per resident over 11 years.

The first phase will include 11 new parks, starting with three this year. In 2021 an eco-park incorporating mangroves will open. Later, a 15-km sidewalk greenway is planned, connecting mass transit stations along major roads. Phase two targets another 11 sites. These numbers do not include two major new parks at public universities or the innovative Sky Park, opened in June -- a 280-meter-long, 8.5-meter-wide gardened walkway built on an abandoned train track on a road bridge crossing the Chao Phraya River. First proposed by the riverside community, with built-in seating to view the sunrise and sunset, it links other parks on both sides.

Propelling Thailand's green push is the Urban Tree Network, a coalition of more than 60 nongovernmental organizations, universities, public agencies and companies. Its best-known civic member is the Big Trees Project, a social enterprise that trains arborists, assists tree owners and holds public events that build tree care skills, such as international tree-climbing championships. Established in 2010, and with some 156,000 followers on Facebook, the group has made tree care a celebrated cause in Thailand, thanks to its posts of photographs of overhacked city trees.

"We use both carrots and sticks," says co-founder Oraya Sutabutr. On the one hand, Big Trees has spent 10 years building personal trust with officials by sharing know-how, introducing sponsors, publicly applauding progress and giving credit. On the other, it applies community pressure through Facebook, mass media and special campaigns. 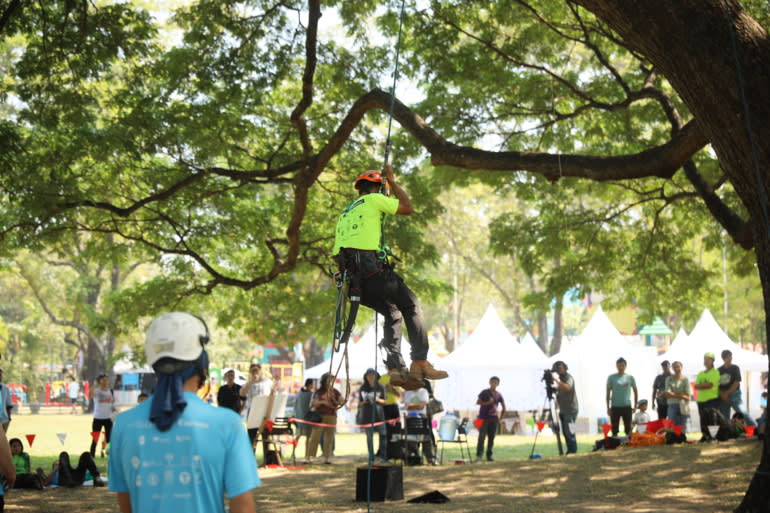 "Sticks" can get results. The BMA, stung by a social media outcry over harsh pruning of large trees on a boulevard known as Wireless Road, recently agreed to talks with activists, experts and big public landowners such as the Metropolitan Electricity Authority to develop the city's first regulations on tree care. Set to launch in the coming months, the rules will govern Bangkok's 50 district offices and serve as a model throughout Thailand. "It's a major breakthrough. It covers all the do's, don'ts and essentials of urban tree care," Oraya says.

Another key civic platform is We Park, which joined the BMA, Big Trees and PTT, a state oil group, as one of four co-founders of Green Bangkok 2030. Led by landscape architect Yossapon Boonsom, We Park has simple aims: Get government bodies to free up land; enlist companies to donate funds; and ask the public to join in designing parks and other public spaces. "Creating green space is not just about quantity. It's about empowering citizens, so that not only the government but the community and private sector are fully involved," Yossapon says.

The We Park vision is proving workable. Yossapon and his design consultancy, Shma, have collaborated with the BMA on six pilot projects, including green walks along canals, green links that connect large parks and gardened cycle paths under expressways. A new "pocket park" will occupy a small plot of land donated by a property owner. Students and the local community will help plan it and raise funds. 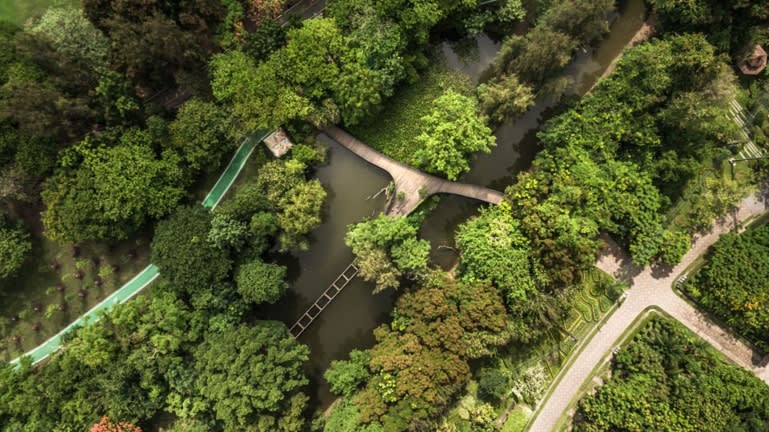 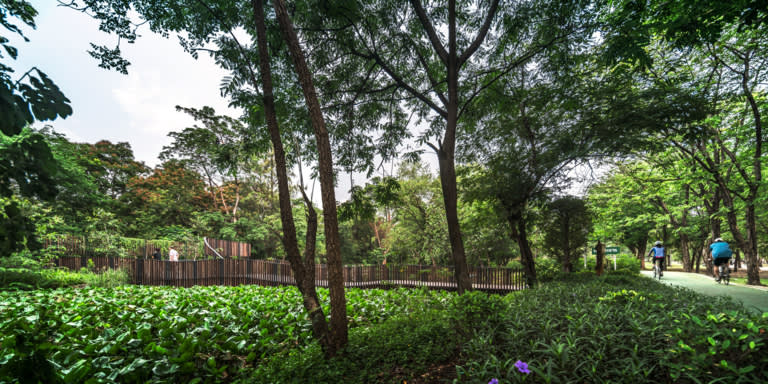 Yossapon's team estimates that there is about 42 sq. km of abandoned land and buildings throughout the city, including properties foreclosed in the 1997 financial crisis, creating big opportunities for public use. That is more than the city's existing 40 sq. km of public green space. Meanwhile Shma is working with a growing number of property developers who see gardens, groves and green rooftops as business advantages. The COVID-19 crisis has added impetus, as people working from home head outdoors to de-stress, stay active and avoid crowded gyms and malls.

The Sky Park was designed by landscape architect Kotchakorn Voraakhom, who creates parks not just for beauty and recreation but as "green infrastructure" that provides climate resilience. Her design for the city's Chulalongkorn University Centenary Park features a museum-top green roof, solar power and a sloping, zigzag design that slows the runoff of rainwater.

An integrated storage tank holds 3,700 cu. meters of water -- enough to combat local flooding and irrigate the 44,700-sq-meter site every day for a month. The university project was central Bangkok's first major new park in nearly three decades when it opened in 2017. Similarly ambitious is the 22,000-sq.-meter Thammasat Urban Rooftop Farm, opened in December 2019, which Kotchakorn and her firm, Landprocess, designed for Thammasat University's suburban Bangkok campus. One-third of the space forms the largest urban rooftop farm in Asia, open to students and the public to grow organic rice, vegetables and herbs.

Like the facility at Chulalongkorn University, it has solar panels, green public space and a rain-slowing, cascading design influenced by the structure of traditional rice terraces. It stores 11,000 cu. meters of rainwater for flood control and irrigation. "Green infrastructure is something new. It's not about an engineering solution but a multidisciplinary approach," Kotchakorn says.

At the BMA's Department of Parks, lead architect Pajariya Mahakanjana says the city has wanted to expand green space for decades, but has been hampered by a lack of funds, a small design staff, outdated regulations, slow budget processes and schedule pressures that have usually meant skipping public consultation. "Today it's getting better," she says, as climate change, air pollution and the COVID-19 pandemic help people to understand the importance of trees. The BMA is donating 1 million saplings to the public to plant, toward a goal of lifting the city's percentage of tree canopy to 30% by 2030, from 17% today.

A key institutional creator of parks is Chulalongkorn University’s Urban Design and Development Center, a think tank comprising architects, planners and researchers, which initiated the Sky Park and other innovative green spaces, often working with the BMA.

The Big Trees Project, for its part, goes to great effort to nurture even single trees. A mahogany planted on the orders of King Chulalongkorn more than a century ago was at risk of harsh pruning last year to keep it clear of a procession during the coronation of King Maha Vajiralongkorn. Gathering nine allied groups, Big Trees undertook negotiations to provide expert help to the many authorities involved, including the Royal Thai Army, which was in charge of the procession.

"The army thought we would make trouble, but we worked to make them look good," says Santi Opaspakornkij, a Big Trees co-founder. Today, the grand old tree remains big.