Sanya Souvanna Phouma inside Funky Lam, a restaurant launched by the serial entrepreneur in Bangkok. "I was burning to create something new," Sanya says of his early days in the Thai capital after leaving France. (Courtesy of Sanya Souvanna Phouma)
JOHN KRICH, Contributing writerJune 17, 2022 08:00 JST | Thailand
CopyCopied

Only the quirkiest of entrepreneurs could draw inspiration from his family's experience after the 1975 takeover of Laos by the Pathet Lao communists.

Nursing a craft beer at midnight in Bangkok's BangBang Burgers, his latest boxing-themed bar and restaurant, Sanya Souvanna Phouma looks younger than his 50 years. But the serial entrepreneur, who helped to create some of Bangkok's wildest most innovative entertainment and dining venues, suggests that his background in the turbulent politics of late 20th-century Laos has helped shape his ideas -- and success -- in cosmopolitan Bangkok. Among his signature projects have been the unique music/dining/cabaret combos Bed Supperclub, Maggie Choo's and Sing Sing.

There is a deep underlying current to his commercial concepts, rooted partly in his family's intense history. "I think I've been successful in seeing what others can't because of my dual identity," he says. "Maybe there's also something in my background that makes me need to see people enjoying themselves."

For anyone who remembers the Vietnam War, Sanya's grandfather Souvanna Phouma was a legendary figure -- the longtime prime minister of Laos, Western-educated but of royal provenance; a moderate trying to maintain neutrality amid civil conflict.

In a notorious episode of the period, the toddler Sanya was sent to Bangkok's Don Meaung airport to greet his grandfather, who was arriving on a diplomatic mission to see Thailand's King Bhumibol Adulyadej. "I guess I was being mischievous as usual, so that my grandfather had to shout out my name, " he recounts. "But the command was answered, to general hilarity, by Thailand's prime minister of the time, who happened to be named Sanya also." 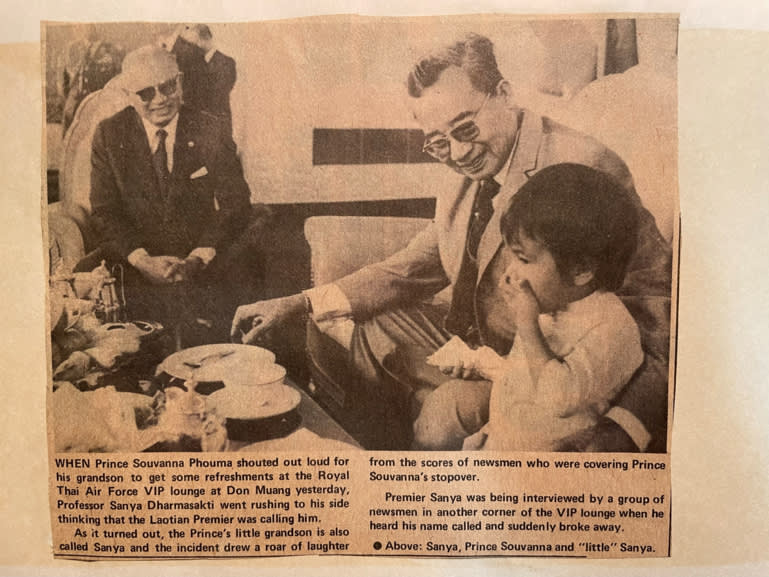 A young Sanya sits with his grandfather, Souvanna Phouma, then the prime minister of Laos, at Don Meaung airport in Bangkok. (Courtesy of Sanya Souvanna Phouma)

History also has a way of coming full circle. Today, Sanya has embarked on two projects aimed at honoring his heritage and trying to come to terms with a tragic past that engulfed his family (and with it, a country of origin that he has never lived in).

"Every time I go through customs into Laos, my heart skips a beat," Sanya says. That is why, he adds, "I've been plotting a work about the history of the country for quite a while, doing a lot of research about what led up to 1975, and how communism was imposed on a rural populace who were living in peace."

As Sanya recounts it, the takeover of Laos by the Pathet Lao had much to do with his half-uncle Souphanouvong, one of the youngest sons of a prince who was the last regent of Luang Prabang, the royal capital of the so-called Land of a Million Elephants. Sanya's half-uncle, Souphanouvong, became known as the "Red Prince" after he allied himself with Ho Chi Minh's North Vietnamese regime and became the chief backer of the Pathet Lao communists. (Getty Images)

Finding a bride to marry in Vietnam, Souphanouvong soon allied himself with Ho Chi Minh's North Vietnamese regime and became the chief backer of the Pathet Lao. Intending to wreak revenge on his more powerful siblings, he became known as the "Red Prince" in the process. Speaking of the overthrow of the country's last king and queen, whose DNA he carries, Sanya bemoans their fate. "They died in dark conditions in captivity. It is an hour of shame for the country, especially when one knows how the king had no issues becoming a simple citizen."

This internecine struggle also caused Sanya's father, Prince Panya, to flee Laos one night by swimming across the Mekong River. The prince "carried nothing but the Rolex watch my grandmother gave him," Sanya says.

Although he was born in Laos, Sanya's childhood was spent in a colonial Bangkok mansion, safely sheltered from the war and family conflict. At the war's end, he moved to France with his Thai mother, a member of the elite Bunnag clan who later married the heir to the Benedictine brandy franchise. Sanya led a life of privilege "in a not very dynamic neighborhood near the Eiffel Tower." A newspaper clipping of an article describing the famous incident in which Sanya's father, Prince Panya, fled Laos by swimming across the Mekong River. (Courtesy of Sanya Souvanna Phouma)

Studying business management, he felt a pull to more creative pursuits, and to Bangkok. "I had a feeling," he says, that "something big was waiting for me" in Thailand, which was then going through a boom -- at least, Sanya jokes, "until the [1997] financial crisis hit just as I landed." Falling in with a bohemian crowd, he took up photography, and even had ambitions to try his hand as a radio DJ presenting jazz..

"I was burning to create something new," he says, and a partner's idea to combine dance music with dining on beds led to two years looking for funds and constructing a project that became known as Bed Supperclub.

"We were unknowns in business," he says. "But nightlife spots were so unoriginal back then, and I found my calling trying to stimulate all five senses and showcasing all the surprising talent there was in Bangkok. Besides, it's always been a place with a tolerance for trying new things." 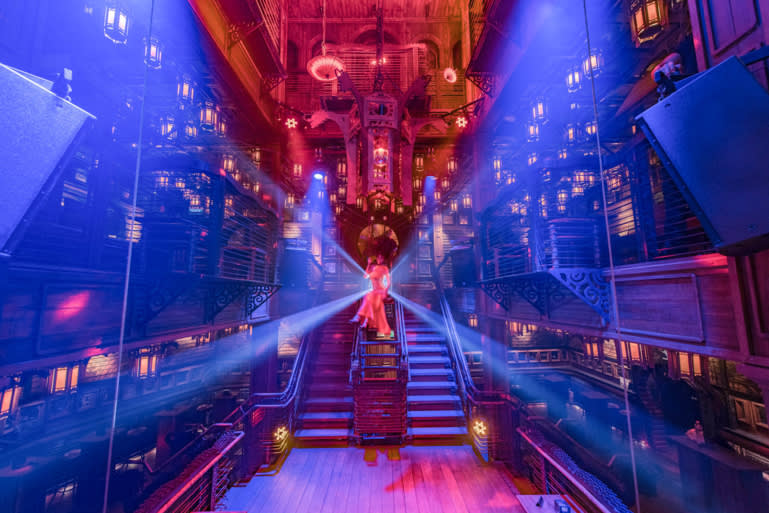 Bed Supperclub would be all the rage for more than a dozen years. By then, Sanya had also found inspiration in teaming up with the techno-baroque Australian designer Ashley Sutton, including a stake in the latter's Iron Balls bar and gin distillery, fashioning places that drew on both the hip trends of the day and nostalgia. "I've always been fascinated by the Asia [that existed] before [U.S. soldiers'] G.I. clubs ... with all that faded elegance," he says.

In popular dining and drinking outposts of sophistication such as Quince, Cafe Luka and Cactus (which exudes a midcentury "Palm Springs" aura in the fashionable Yenakart district), Sanya says, "I've always tried to find quirky cabaret acts, artists, LGBT performers. From the beginning with Quince, I've promoted local products and responsible eating. I just can't help going a bit against the grain."

That attitude, plus a strong need to return to his roots, provided the inspiration for his most recent enterprise, Funky Lam. The latter word is Lao for "dance," always a component for Sanya, while "funky" came from a New York chef's description of the rough and exciting flavors of Laos. 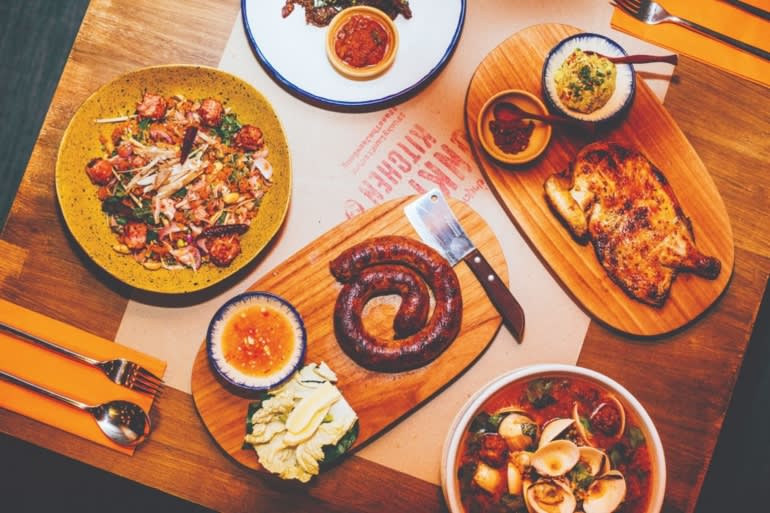 Funky Lam, Sanya's most recent enterprise, put Lao flavors in a global setting, combining characteristic sauces with ingredients such as foie gras, wagyu and rainbow trout. The restaurant was forced to close due to the pandemic, but Sanya aims to open it in a new location this year. (Photo by Aaron Joel Santos)

Funky Lam gave Lao cuisine, more commonly found in back-alley stalls or shacks, an atmospheric setting in a former motorcycle shop transformed into a sort of war correspondents' haunt with rows of overhead helmets, neon lights, 1960s references and a giant image of a crocodile.

"The crocodile was a hated symbol of the French [during the colonial period in Laos]," Sanya says. "And going by motorcycle is the best way to explore Laos' mountainous back roads."

Begun in tandem with a cousin -- Saya Na Champassak, a restaurateur in France who also has a Lao prime minister in his lineage and whose grandmother is a deposed princess -- Funky Lam's menu put Lao flavors in a global setting, combining characteristic sauces with ingredients such as foie gras, wagyu and rainbow trout. 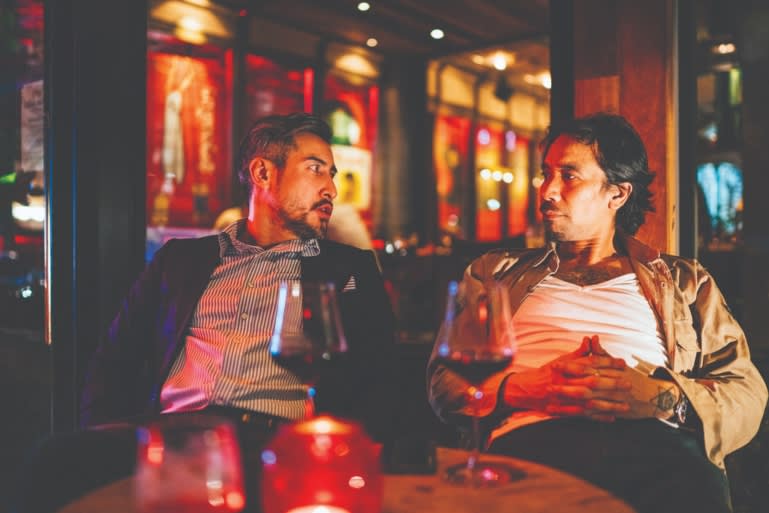 Sanya launched Funky Lam with his cousin Saya Na Champassak, left, a restaurateur in France who also has a Lao prime minister in his lineage and whose grandmother is a deposed princess. (Photo by Aaron Joel Santos)

"We wanted to put the dishes we remembered at the center of the Southeast Asian food revival, to show this isn't just food for maids and drivers," says Sanya.

Started in 2018, Sanya's latest venture was hit hard by the economic impact of COVID-19 and had to close, leading the ever-productive investor to found two "casual Italian cantinas" -- Gigi's Dining Hall and a Gigi's 2 cafe -- and Lily Fu's, an Asian bistro, as well as BangBang Burgers (with live music). But he aims to reopen Funky Lam in a new location this year.

"There's a lot of feeling behind Funky Lam, a lot to make my ancestors proud," he says. "The main purpose, after all, was to make urban Thais realize how much of their favorite food, how much from Isan and the north, has its origins in [neighboring] Laos. To change perceptions and achieve a bit of 'de-Thai-ification,' you might say. Because nothing from Laos seems to get the credit it deserves."

It would be nice, Sanya adds, "for this country to get some real recognition."