YANGON -- In a dusty ochre-and-green compound in a corner of Mawlamyine, the capital of Mon State in eastern Myanmar, a century-old Gothic-style church is celebrating the end of the first stage of a major restoration program, and the beginning of the next. By a happy chance, the restoration has also initiated a program with far-reaching implications for the health of both the nation and the country's architectural heritage.

The Judson First Baptist Church, already regarded as a landmark for its significance to the Baptist movement worldwide, has become an unlikely symbol of Myanmar's modernization, combining heritage conservation with environmental awareness. Such a development would have seemed unlikely two centuries ago, when the timing of the church's founder, Adoniram Judson, seemed to be disastrous. In February 1812 Judson and his wife Ann set out from the U.S. as Protestant Christian missionaries bound for British-ruled India, arriving in Kolkata (then called Calcutta) on June 17 -- just a day before U.S. President James Madison signed a declaration of war against the United Kingdom.

India was at that time governed by the British East India Company, which was sensitive about evangelical work amongst the population, and even more hostile to American missionaries than to the British variety. The Judsons were ordered out of India. They went to the island of Mauritius, and then decided to go on to Myanmar, known as Burma -- a country of which they knew nothing.

Arriving in Yangon, then called Rangoon, in July 1813, their first sensations were of despair. The city was small, built on swampy ground, filthy, and a danger to health. They spoke no Burmese. The native population was entirely Buddhist, except for those who were animist.

The Judsons were the first American Protestant missionaries to reach Myanmar, although a handful of British Baptists had arrived in 1807. The British missionaries were making no progress, and soon after the arrival of the Judsons they left the country. The Judsons learned Burmese, and by 1816 Adoniram was fluent enough to begin translating the Bible. His translation, along with his Burmese-English dictionary, is still in use today. 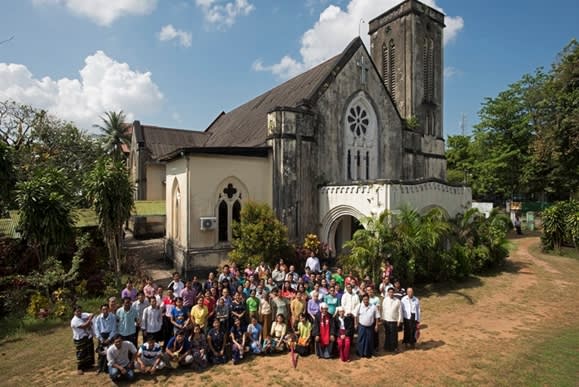 The Judsons were in Myanmar for six years before their first convert was baptized, but gradually the church's numbers increased. In early 1824 Adoniram felt confident enough to approach the Burmese King Bagyidaw at Inwa (then called Ava) in Upper Myanmar, to request permission to extend his teaching throughout the country.

Once again, his timing was poor. The First Anglo-Burmese War was breaking out, the two sides fighting over the territory of Bengal, which lay between them, and the king assumed that Judson was a spy. The missionary was arrested and thrown into Ava's notorious prison, where he was shackled and tortured, hauled off the ground by his ankles, and kept alive only by food that Ann was able to bring him.

Judson spent more than a year in prison until, with peace in the offing, he was released and employed as an interpreter. The war over, he returned to Lower Myanmar, where the British now controlled strategic territories, and at the end of 1827 he built Myanmar's first Baptist church at Mawlamyine (then called Moulmein) which was for a while the British capital. In Myanmar today about 6% of the population is Christian, with two-thirds being considered Protestant, of whom almost half are Baptist. The Myanmar Baptist Convention has more than 1.6 million members in almost 5,000 churches, forming one of the world's largest Baptist communities.

Judson's greatest success was amongst minority ethnic groups, many of which followed animist beliefs. Most Myanmar Christians today are from minority groups such as the Karen, Lisu, Kachin, Chin and Lahu, with only an estimated 0.1% of the majority Burman population being Christian.

In mid-December, the First Baptist Church at Mawlamyine began celebrations for its 190th anniversary. The current building is the third, Judson's original church on this British-gifted site having been a bamboo structure built in the style of a traditional Myanmar zayat, or rest house.

A few years later this was replaced by an open-sided masonry building that followed the colonial style closely enough to feature a modest bell tower. Work on the present English-influenced Gothic Revival church began in 1907, driven by a growing congregation and the need to erect a separate school building, with the structure being completed in 1924. 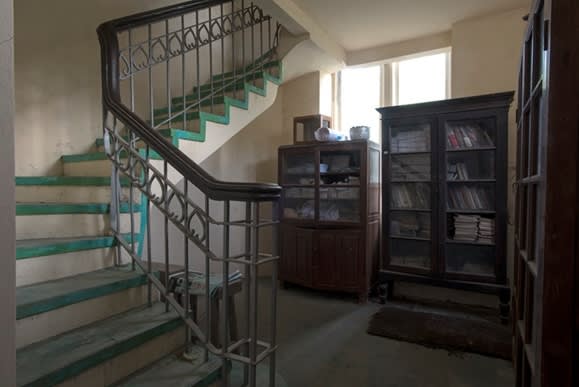 The fabric of the building has suffered neglect over the years. The splendid teak shingle roof was destroyed by a bomb in World War II, and hastily replaced with a roof designed more to keep out the weather than for aesthetic appeal. A number of other changes to the building have compromised its appearance and functionality, and Myanmar's notoriously hot and wet weather has hastened the deterioration.

Given the historical link through the Baptists between the U.S. and Myanmar, and the implications that this has for cultural relations, a decision was made in 2015 to restore the church using funds from the Ambassadors Fund for Cultural Preservation, a U.S. State Department program to support developing countries' efforts.

The funds were channeled through the World Monuments Fund, a New York-based nonprofit organization dedicated to the preservation of historic architecture, with the initial work starting early in 2016.

Along with the restoration of an important cultural landmark, the program is helping to develop conservation and craft skills for other projects in Mawlamyine, which has a treasure trove of colonial buildings, and for other restoration projects in Yangon and elsewhere. However, an unexpected discovery has led to an important health-related campaign.

Jeff Allen, WMF's program director for the project, said that the first stage of restoration was based on a collection of 16 drawings detailing damage to the roof, floor, masonry and carpentry. It was quickly realized that the post-war roof was composed of corrugated concrete asbestos fiber, a carcinogenic material whose potential health hazards were not understood at the time. "Needless to say, confirmation of asbestos fibers was a game changer," said Allen. "It required a new, more thoughtful approach to intervention." But it was also an opportunity: WMF was able to expand the focus of the project to include lobbying for standards on the handling of asbestos building materials.

In many countries asbestos use has been banned, and its handling is highly regulated. In contrast, Myanmar has many buildings containing asbestos materials, but no laws or guidelines on its handling or removal. As a result, asbestos is often removed and disposed of in ways that are unsafe for workers and the environment.

The first step was a workshop designed to raise awareness amongst government departments, the building industry and the public about the dangers of asbestos. In Myanmar the ramifications are enormous, because corrugated concrete fiber roof sheeting and chrysotile asbestos wall paneling have commonly been used to repair colonial buildings.

Allen said that there is little public knowledge on the subject of asbestos building materials in Myanmar. WMF sees the First Baptist Church as a case study, and the first step toward a legislative ban on asbestos building products, he said.

Meanwhile, work proceeds on the Judson church roof, with project architect Aung Soe Myint, based in Yangon, and Australian asbestos roofing removal specialist Phil Bamford working together with a local contractor to remove the structure.

Allen said that the replacement roof will be a fusion of British neogothic and Burmese wood craftsmanship, and must be completed before the 2018 monsoon season. Work on the replacement will start around Jan. 20 and continue through early April 2018.

Adoniram Judson spent 37 years in Myanmar. His great achievement at Mawlamyine was not shared by Ann, who died of smallpox shortly before he arrived in the town -- a tragedy that brought him close to a complete emotional breakdown. He was 61 when he died of lung disease on board a ship in the Bay of Bengal, and was buried at sea.

Judson would have been overwhelmed to see the present strength of the Baptist Church in Myanmar. He would also have been impressed to see how the First Baptist Church building has sparked such an important campaign for the nation's future health.