The city of Surakarta in Central Java, once the capital of the Mataram Kingdom, has maintained the island's traditional culture more than perhaps anywhere else on the island. The sound of the gamelan, a Javanese traditional instrument, echoes through the streets, and time seems to pass more slowly than in big cities like Jakarta or Bandung.

The smell of wax hits you immediately as you step in to the Danar Hadi batik workshop in a suburb of the city, where about 60 women expertly draw birds and flowers on pieces of cloth.

Tracing the designs with a penlike instrument called a canting, they carefully apply thin lines of gold-colored wax to the white fabric. In the next room, some 100 men stamp patterns onto cloth with copper blocks dipped in the molten wax.

This ancient Southeast Asian art form involves dying the fabric so that the color only permeates the parts where wax has not been applied. Once dry, the wax is removed to reveal that pattern. Repeating the process several times creates increasingly complex patterns, and hand-drawn pieces can take three or four months to complete, according to the workshop.

Originally used for traditional costumes and worn only by royalty, batik is believed to have been produced in Indonesia for more than 1,000 years. The technique is now undergoing something of a revival, having struggled to compete in the era of mass-produced clothes. 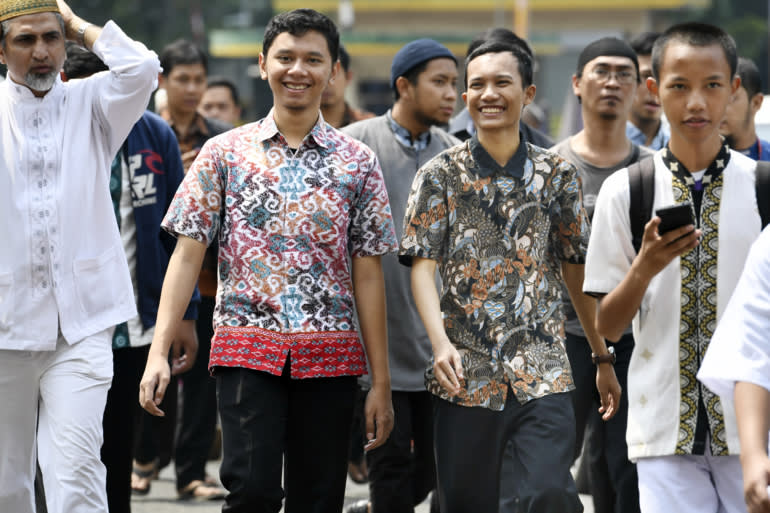 Batik shirts and dresses are now considered both an ethnic costume and formal wear. Indonesian President Joko Widodo, a Surakarta native, has made a point of donning batik for formal occasions, and often gifts shirts made using the craft to visiting dignitaries. 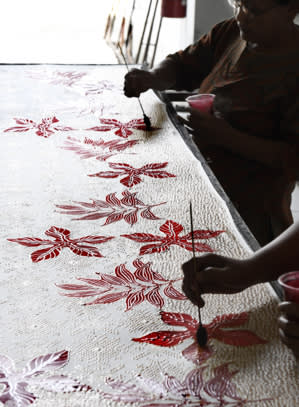 The fame and popularity of batik rose significantly when it was added to UNESCO's Intangible Heritage list in 2009. Asti Suryo Astuti, assistant manager at the Danar Hadi batik museum, said the number of foreign visitors has been growing. The museum boasts a collection of more than 10,000 pieces, making it one of the world's only museums of its kind. "The patterns are fascinating because each one has a meaning, and I was amazed by the intricacy [of the designs]," said Keita Michikawa, a visitor from Japan.

The production method in use today was established in the 17th century, when it became popular in the royal courts of Surakarta and Yogyakarta. At the time, only women made batik in the palaces, and most hand-drawn pieces today are still crafted females.

Batik was taken around the world by Javanese trading ships as the island flourished through oceanic commerce. Zheng He, a Chinese admiral during the Ming dynasty, visited Java during an expeditionary voyage and brought back various items from the island. Portuguese ships bought spices from Java during the Age of Discovery, and it also traded with the Ryukyu Kingdom in southern Japan. After being exposed to various cultures, batik artists adopted foreign motifs into their designs. 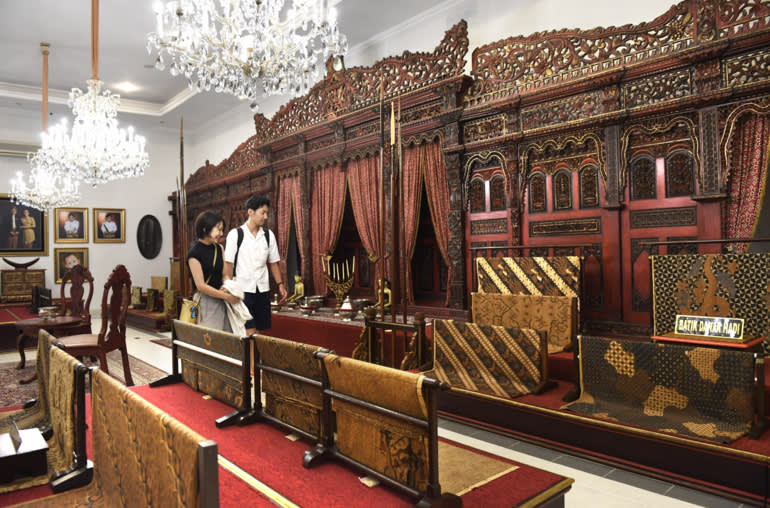 Tourists visit an exhibit at the Danar Hadi batik museum.

In the 19th century, the art form further evolved under Dutch colonial rule, when brighter and more vivid colors started being used.

"The flower motifs were introduced from the Netherlands, and the birds from China," said Gigih of the batik museum. Images of orchids, peacocks and butterflies were also prized in Europe. Small workshops and stores can be found throughout Surakarta, especially in the Kauman district, which is home to more than 60, each with its own unique variety.

"This is Hokokai-style batik," said Yeyen at the Gunawan Setiawan store, spreading out a piece in vivid red. The fabric features two different designs, so it can be used both in the daytime and at night. It was produced during the Japanese occupation of the islands between 1942 and 1945, and Japanese-themed designs featuring motifs like cherry blossom remain popular today, Yeyen said.

Despite its unquestionable beauty, batik came to be seen as old-fashioned by many Indonesians during the latter half of the 20th century, as people began favoring Western styles. Dignitaries, including the president, increasingly attended formal events in a suit and tie, and traditional clothes became increasingly rare. 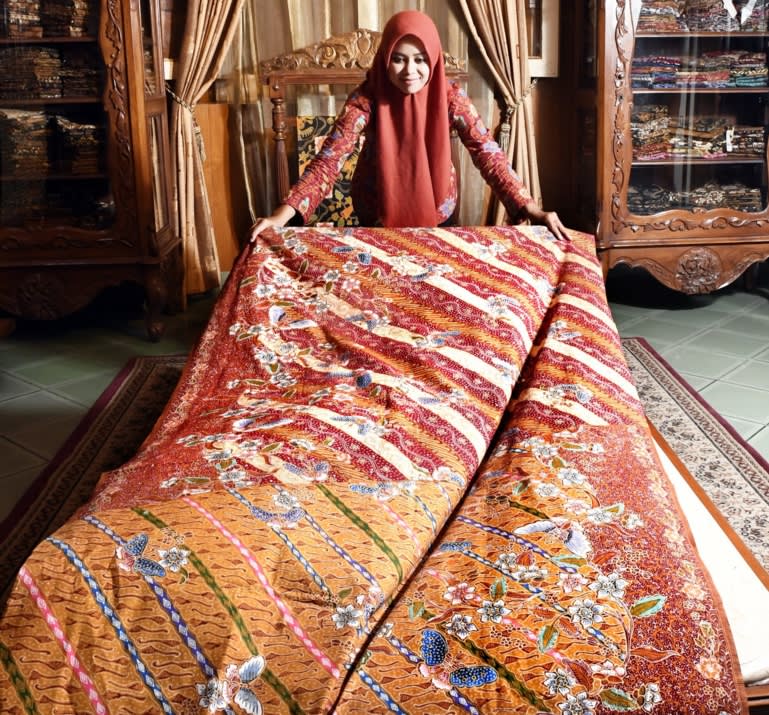 Hokokai-style batik featuring cherry blossom and other motifs reflects the influence of the Japanese occupation. (Photo by Akiyoshi Inoue)

That situation changed thanks to a perhaps unlikely source, when Nelson Mandela began appearing sessions of the U.N. General Assembly and other high-profile events clad in his favorite fabric.

Then came the UNESCO designation and Indonesians seemingly fell back in love with batik. The country now celebrates Batik Day on Oct. 2, the designation's anniversary.

Small workshops will always struggle to compete with mass-produced printed fabrics, but many appear to have carved out a niche for this most traditional of artforms in the 21st century.

"Batik is not just a textile product. It is Javanese culture itself," said Asti.