MUMBAI -- "People are crazy about flamingos here," says chemistry student and part-time tour guide Ujwal Vhadkai, binoculars gently swinging from her neck, as a flock of lesser flamingos flies in front of the tourist boat she is standing in.

The vessel was a sellout, containing around 30 cooing domestic tourists, all keen for a style of glorious visual drama uncommon in an Asian megacity. Fingers pointed and necks swiveled as another pink flock took off from the water surface of Mumbai's Thane Creek, the birds arrowing through the air in front of skyscraper silhouettes rendered shadowy by the city's smog-haze.

In winter tens of thousands of the birds can be seen on the water surface and mud flats of Thane Creek -- at 26 km, Asia's largest inlet -- during low tide. The phenomenon is the result of a dramatic rise in the number of flamingos migrating to the city over the past few years, which naturalists believe was instigated by a rise in the amount of blue-green algae, a major food source for the birds, available there.

The trend has sent a new public interest in bird-watching swooping through the city, as well as raising awareness of bird conservation and putting pressure on the government to protect the creatures.

Rahul Khot, assistant director of the Bombay Natural History Society, or BNHS, says that he has viewed historical reports stating that during the first half of the 20th century, only "a couple" of flamingos were ever spotted in the city at any one time. In the 1980s and 1990s, he says, flamingos began migrating to Mumbai in larger numbers. In 1994 the city government reported a flamingo count of 8,000. 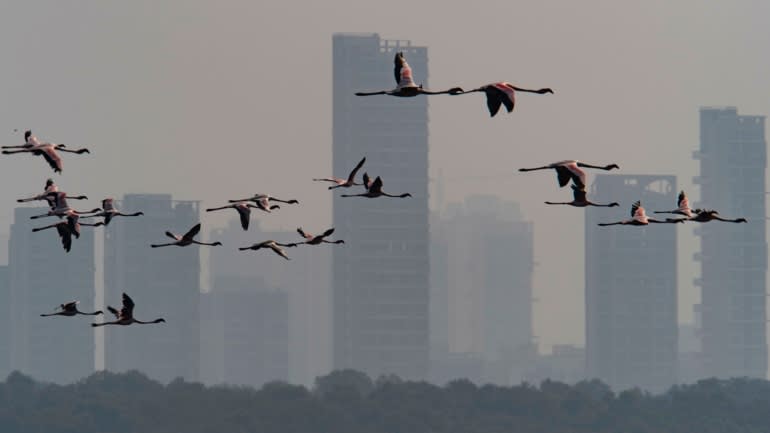 Top: Part-time tour guide Ujwal Vhadkai, standing, and other passengers are on the lookout for flamingos during a boat ride in Thane Creek. Bottom: The hazy Mumbai skyline forms a backdrop to a group of flamingos in flight. (Photos by Matjaz Tancic)

If the data leap was spectacular, the actual image of the masses of birds congregating in Thane Creek was even more so. "We used to see flocks of around 200," says Nikhil Bhopale, an ecologist and co-author of the book "Birds of the Indian Subcontinent." "Then it was thousands. They're beautiful, elegant. ... It creates quite a sight." Sign of the times: A rare sight in Mumbai in the first half of the 20th century, flamingos now congregate there in numbers as high as 120,000. (Photos by Matjaz Tancic)

Mumbai, one of the world's fastest-growing cities, with a population of 20 million, might not seem like an obvious winter haven for migrating flamingos. But it could well be the blue-green algae that are doing it.

"Nitrification: It's the main reason they come," says Sachin Rane, a naturalist who hosts flamingo tours at Thane Creek with the Wildnest company. Nitrification is the oxidation of ammonia to nitrite, and scientists believe it is occurring on an increased scale in the inlet because of pollution from untreated sewage and garbage being dumped there.

Rane says that expanding slum communities in nearby areas such as Kanjurmarg are among those responsible. "They throw garbage in the mangrove patches, then when the tide comes in the water takes it out," he says. "When the water gets polluted there's nitrification: a decrease of oxygen in the water. Because of that, more algae grows, so the birds come."

It seems likely that the birds come for the blue-green algae then stay for the fantastically flamingo-friendly surroundings. In response to the big pink influx, in 2015 Thane Creek was declared an official flamingo sanctuary by the Maharashtra state government. Measures including a ban on construction in the immediate area, plus strict fishing and boat restrictions, created a calm, largely interference-free environment for the birds, which do not breed in Mumbai. 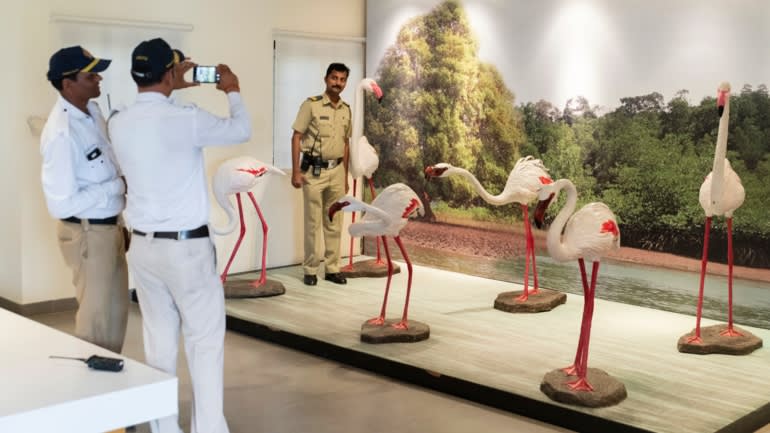 Top: Searching for food at low tide on Thane Creek. The abundance of blue-green algae in the water there is a big draw for the birds. Bottom: A photo op at an exhibit at the Thane Creek Flamingo Sanctuary. (Photos by Matjaz Tancic)

"For any migratory species there are two main aspects of survival: safety and food," says Bhopale. "You get a lot of safety in the creek. Hardly any people enter the area."

Thane Creek is the place to see Mumbai's largest flamingo congregations. When the tide gets high and the inlet's mud flats become submerged, many of them relocate to nearby wetlands. "They continue feeding or just rest or sleep at these roosting sites," says Khot. "These areas are important too."

One such area is a huge pond in Seawoods, a residential section of Navi Mumbai, the "new city" area near Thane Creek's east bank. On a recent Sunday morning, a couple of hours before high tide, around 50 flamingo-watchers bustled on the pond's edge, observing the birds bobbing on water in front of more apartment buildings. 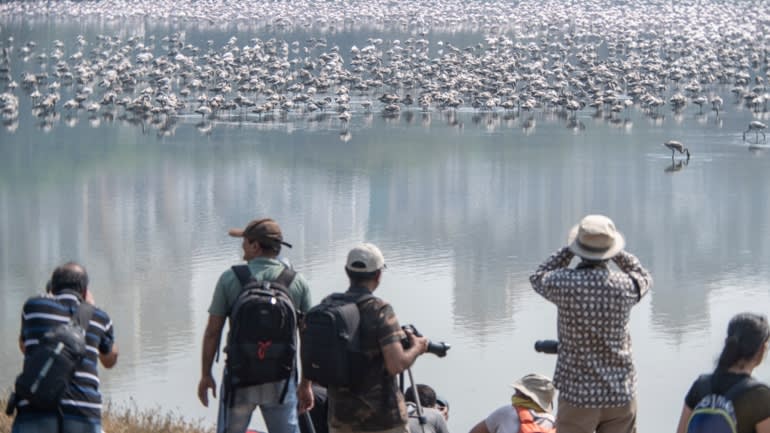 Photographers gather on the banks of the Seawoods pond to capture the colorful tableau. (Photos by Matjaz Tancic)

Without the protective measures of Thane Creek, says Khot, smaller flamingo havens such as these were under threat. Rampant residential construction in Mumbai is edging into them, and huge transport projects such as the Mumbai Trans Harbour Link, a 22 km bridge being built, will also cut into flamingo-friendly areas.

"There were seven or eight wetlands, now only around four remain," says Khot. "They support the flamingo population. If these areas are in decline, there'll be more competition for space."

Considering this, it seems sensible to ask if Mumbai has reached peak flamingo population. Khot says that while flamingo counts such as the January 2019 figure of 120,000 might seem enormous, the population fluctuates quickly due to the flexibility of the birds' movement patterns.

Flamingos, he says, do not have rigid migration habits, and can react quickly to weather and food source conditions. For example, in January 2020 the BNHS counted 30,000 flamingos in Mumbai, then in February counted 80,000. 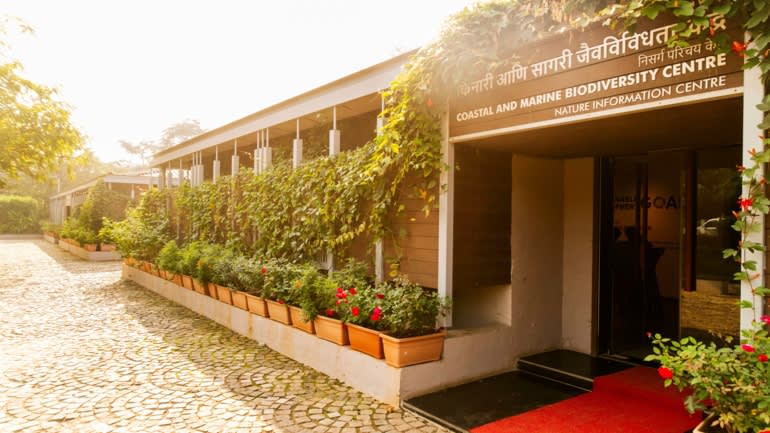 Top: The biodiversity center at Thane Creek. Bottom: A guide points to a prime flamingo-watching spot. (Photos by Matjaz Tancic)

"The migration to Mumbai is not in one batch," he says. "It happens as and when. Last year, for example, there was a drought in Gujarat, so there was no water available in wetlands there." As soon as the flamingos finished breeding season, many migrated. "Fewer flamingos have flocked to Mumbai this year, but it's not worrisome because the overall number of flamingos is still good."

In May 2018 the BNHS launched a long-term wading bird study in Mumbai, to further understand the reasons for the flamingo influx and create more reliable population counts. The findings will be eagerly anticipated by a growing number of flamingo obsessives.

According to the Thane Creek Flamingo Sanctuary, around 7,000 people went on official bird-watching tours in the inlet in 2019. Many more will have gone on independent flamingo spotting trips nearby. 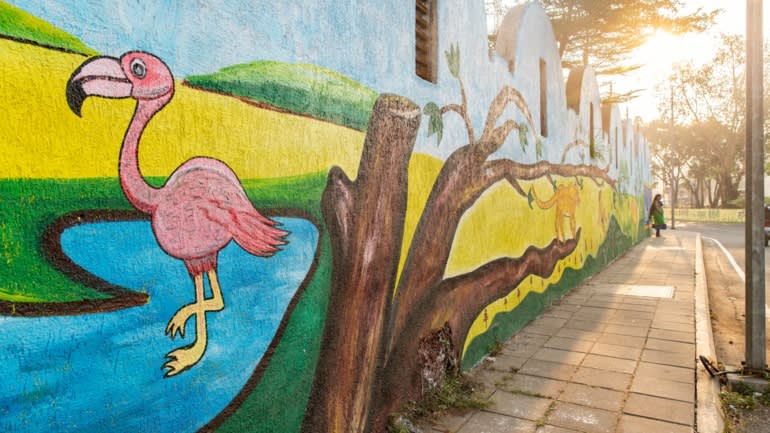 Top: A mural next to the Thane Creek Flamingo Sanctuary. Bottom: Ruling the roost at Seawoods pond. (Photos by Matjaz Tancic)

"There's a lot of excitement," says Bhopale. "Fishermen have started hiring their boats out for birders. The flamingos have got a lot of people interested."

It is an interest cutting across generations. On the bank of the Seawoods pond, bird-watchers from their 20s to retirement age, many wearing camouflage gear, tried to outdo each other with the size of their camera lenses. There was a flurry of clicks whenever a rarer greater flamingo was spotted. The Thane Creek boat ride, meanwhile, was dominated by young families. Kids flapped their arms in excitement as the birds soared close to them.

It remains to be seen whether the birds can survive the disappearance of their wetland roosting grounds beyond Thane Creek in great numbers. But while the algae keeps growing, flamingos will rule the roost.