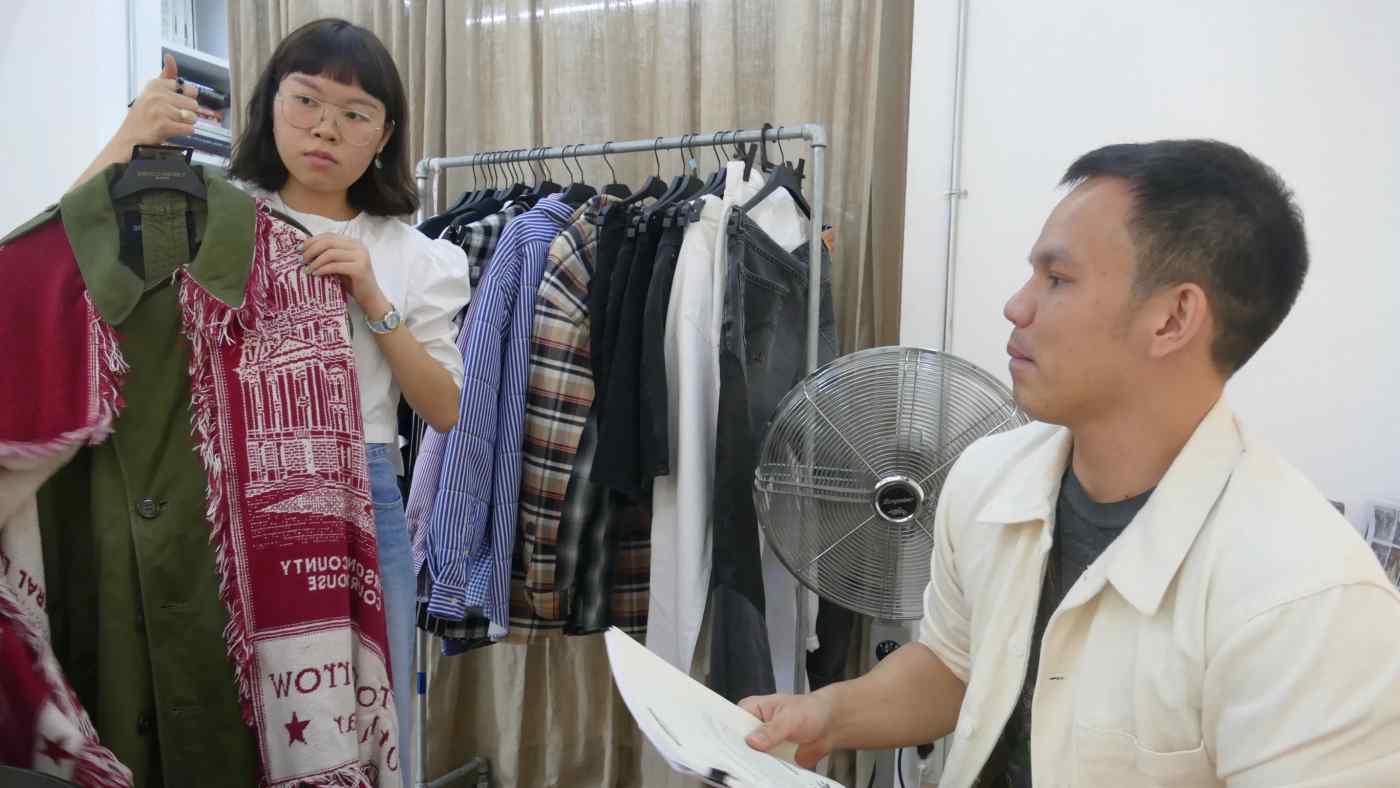 BANGKOK -- What do you do when you are a fledgling fashion designer living a continent away from the centers of haute couture? You try to fashion something out of whatever scraps you can find, as design-school dropout Patipat Chaipukdee did in the bedroom of his family home in Bangkok's working-class Ladprao district.

Starting with the used T-shirts that flood Asia, Patipat sewed on sequins and safety pins to create 30 to 40 one-of-a-kind items a month to sell cheaply at Bangkok's famed Chatuchak Weekend Market. "I would stay up all night," said Patipat, whose nickname is Best. "Just like the [market's] fish noodles, I wanted my clothes to be fresh. And soon, just like the good curry vendors, I was selling out my stock by lunch."

Initially, Patipat could barely afford the rent for his stall space, and his parents could not understand why he did not get a real job. Yet he knew he was on to something when a client flew up from Singapore to purchase every piece on his shelves. Now, in a true rags-to-riches rag trade saga, his brand Dry Clean Only has been featured on the runways of Paris and Tokyo and worn by luminaries such as Beyonce and Rihanna.

"When you're too small to survive in the system, you've got to have that sixth sense about human nature to create clothes that speak for themselves," said Patipat, now 30.

Visitors to Thailand are often struck by the emphasis in Thai culture on physical beauty, popular expression, and its playful, casual style (as well as a penchant for cosmetics). In recent years, a profusion of local fashion brands have been featured in Bangkok shopping malls, and the city's Elle Fashion Week has become an annual rite of passage. Names like Disaya, Meshmuseum and Sretsis ("sisters" spelled backwards) have become established, much-admired names with worldwide adherents. Trying on a Dry Clean Only creation. (Photo by John Krich)

Yet for younger designers, the road to success is still paved with guerrilla tactics, sassy attitude, self-belief and -- most of all -- plenty of "likes" on social media, especially Instagram. Ironically, in a world made ever smaller and more contemporaneous through the internet, the obvious ploy of trading on the exoticism of Thailand has been abandoned in favor of erasing boundaries and embracing a universal expression of the hip, sexy and, especially, contemporary.

"I don't see us as a Thai brand, and we purposely avoid in every way anything that suggests we're Thai," said Vinn Chokkhatiwat, co-founder with Patararin Pongprasit of Vinn Patararin, a futuristic upstart. "We're world citizens engaged in post-digital craft and that informs all we do."

Patipat, whose headquarters is in a converted three-story house down a Ladprao back alley -- rechristened the Casa Dry Clean Only -- subcontracts the manufacturing of only a few of his creations, and employs a loyal team of seamstresses he terms his "family." Inspiration comes from roaming vintage stalls and thumbing his nose at the whole concept of logos and trademarks. "Everything is happening so fast and everyone just gets so flooded with information," he said. "You're lost if you don't stay authentic and true to yourself." Seamstresses at work in the Casa de Dry Clean Only headquarters in Bangkok's Ladprao district. (Photo by John Krich)

While this leaves him on edge about potential lawsuits -- he has already had to stop using patches of Burberry's copyrighted plaid pattern -- his statements in pastiche have become accepted enough for Nike to invite him last March to create a show using the company's older products.

"When you don't have money for [public relations] you have to feed off others' fame, and that can be risky," Patipat said, showing off bomber jackets and other lines referencing Harley-Davidson motorcycles and American Eagle Outfitters, a U.S. clothes and accessories retailer. "Best is always scanning through piles and piles of the latest fashion magazines," said his camouflage-suited manager Jirawat Sriluansoi, 30.

This knack for staying in touch led to what Patipat considered his biggest break and proudest moment: being selected for the racks of Colette, a trendsetting Parisian boutique. "Their buyer came to our show in Paris for 10 minutes and then I flew back to Bangkok to pray," Patipat said. 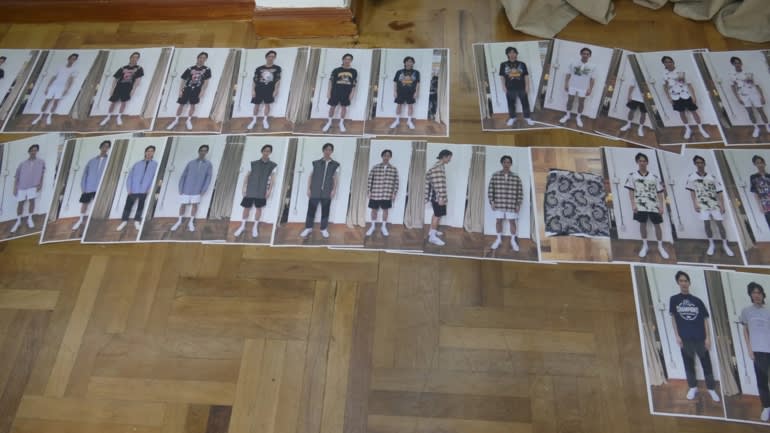 Photos of models in Dry Clean Only designs. (Photo by John Krich)

Like Dry Clean Only, Vinn Patararin works out of a converted townhouse crammed with racks of samples and tables full of patterns -- this one in the Aree district, a hotbed of designers and artists. Yet the company's approach is entirely different. A former architect who studied the profession at Bangkok's prestigious Chulalongkorn University, Vinn said that every piece his brand creates is an extension of that background.

"We like to layer patterns, keeping things on a human scale, doing something high-tech even as we're referencing nature," he said. To this end, the company sometimes employs 3D printers, uses polyvinyl chloride, or PVC, sheets as fabrics, seeks inspiration from "nets and fish traps," and plays with see-through gowns, orange and silver shawls and other one-of-a-kind splashes of color.

Vinn met his partner Patararin in Paris, where they were part of a group of expatriate Thais studying at fashion and design schools. The two were soon winning product design competitions and within six months had been invited to participate in runway shows in Copenhagen and Kuala Lumpur. They were featured in Vogue Italia and on the BBC World Service before any Thai media picked up on them. 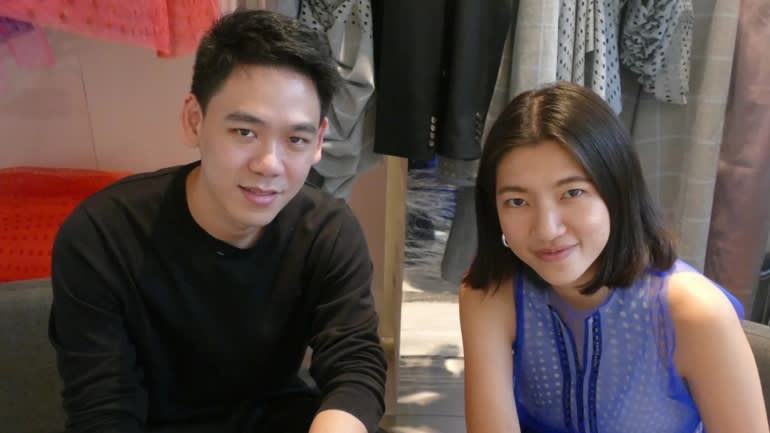 "It all happened so quickly that we had to come home to regroup. Because our DNA is about experimentation, not fast fashion," Vinn said.

The founders insist that selling clothes is only a part of their artistic thrust, which includes offering branding services to Thai companies, adding design elements to hotels, and creating challenging art installations that can take up to a year to plot -- such as their lining of Doi Saket Lake in the northern city of Chiang Mai with 850 plastic bottles. 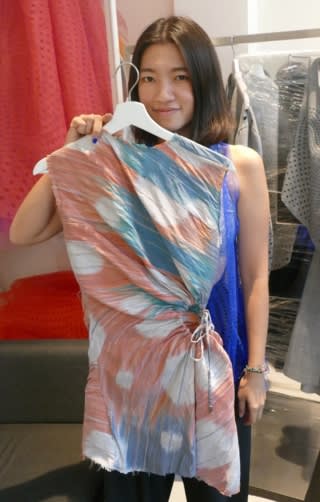 Even when they had a pop-up store in Bangkok's Emporium shopping center they found that their customers "wanted to come here and know us personally," Vinn said. "We'd never want to be a chain. Everything we do feeds off the rest and we want to participate in the culture. We want to use design to tell stories -- and even as we help define what's modern, doing something timeless would be the highest compliment."

Shone Puipia, a new entrant in Thailand's higher-end fashion scene, is hoping that his highly personal style will establish his name. Shone, who is in his 20s, only recently returned from fashion school in Antwerp, Belgium, but he has made an immediate impact in Bangkok. His showroom and studio, hidden behind an antique Thai home in an exclusive side street off central Suanplu, is a multistory marvel of black steel and floor-to-ceiling windows established with the support of his parents, Chatchai Puipia and Pinaree Sanpitak, two of Thailand's best-known contemporary artists.

This has freed Shone from the commercial demands of mass market ready-to-wear apparel, allowing him to unleash his flamboyant artistry in made-to-order hand-sewn dresses made of salmon skin (from a tannery in Iceland that specializes in fishy fabrics) alongside a line of extra-pointy, knee-high cowboy boots and totes festooned with wild plumes. Taking classes at Bangkok's Alliance Francaise -- a French organization that promotes France's language and culture -- he discovered a knack for sewing and molding; further study in Milan has added what he termed "a feeling for luxury." 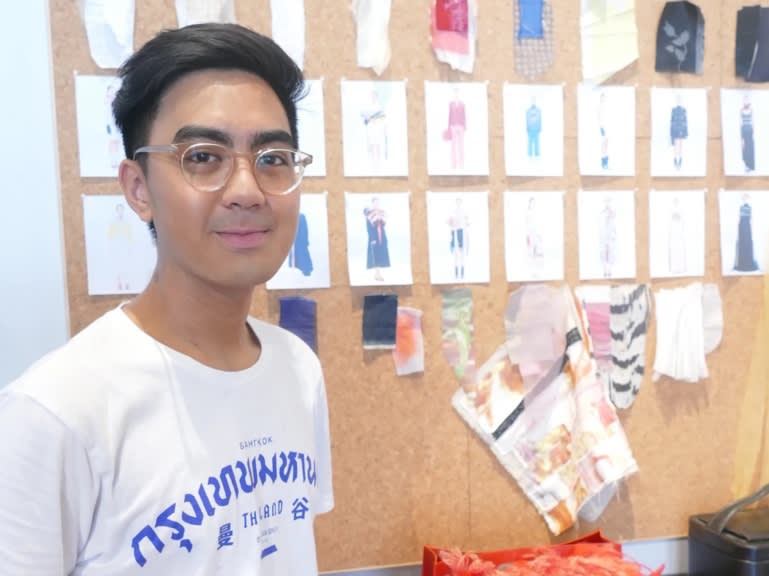 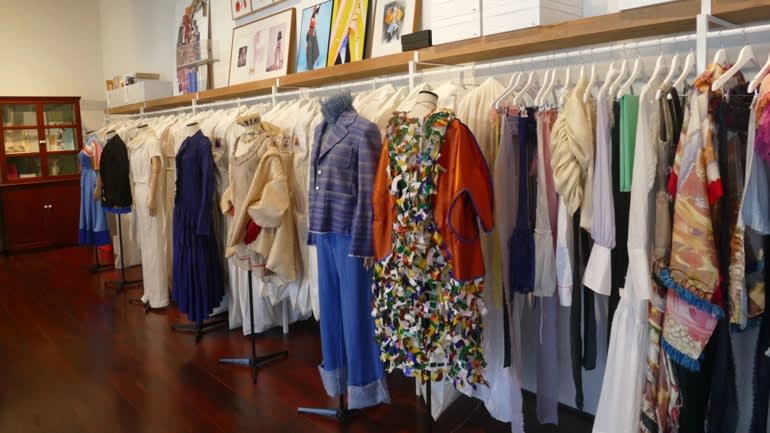 Shone, who is aiming at a very select and demanding group of customers, said the most difficult aspect of his startup has been finding seamstresses who are sufficiently skilled to execute his visions. After only two years in the fashion business he seems to have hit his stylistic stride through a passion for color. Yet his tropical shades seem to be the only discernible influence of his homeland.

As Patipat and Vinn demonstrate, this tendency to avoid anything but the subtlest Thai references is emerging as a common theme among young designers. They have plenty of self-confidence, though.

"One thing we're proving is that we don't need Paris or Tokyo anymore," said Patipat. "Who can say that anywhere is cooler than Bangkok?"