Huang Xi, pictured here in Guangzhou, is the founder of mainland China’s only nonprofit organization offering psychological counseling to transgender people. She came out as a transgender woman to her mother and long-term girlfriend in 2017. (Courtesy Huang Xi)
KANDY WONG, Contributing writerOctober 4, 2021 10:30 JST | China
CopyCopied

Huang, who was identified as male at birth in southern China in the 1980s, began to question her gender in kindergarten, but stayed in the closet until 2017 when she came out to her supportive mother and long-term girlfriend, adopting the feminine pronoun while identifying as neither male nor female. "I love to dress like a woman and get out of the binary male-female bias. I'm open to people with all genders," she says.

Huang was inspired in part by life as an exchange student at Colorado State University in the U.S., where open discussion of transgender issues helped her to clarify her gender identity, and in part by the example of Jin Xing, a transgender woman who found fame as a dancer and later became one of the best-known television presenters in China.

But the successful lives enjoyed by Huang and Jin are unusual in China, where transgender policy remains backward, with enormous hurdles facing trans people. "On the legal front, there's nothing called transgender," says Huang. "It's not an identity. It's either male or female."

China's most resent policy on sex reassignment surgery, published by the National Health Commission in 2017, sets a high bar for access to surgery. Treatment is restricted to people age 20 or older, who must prove parental approval and first undergo psychological and psychiatric therapies for at least a year. "With these criteria, it's almost impossible for a person to change their identity," says Huang. 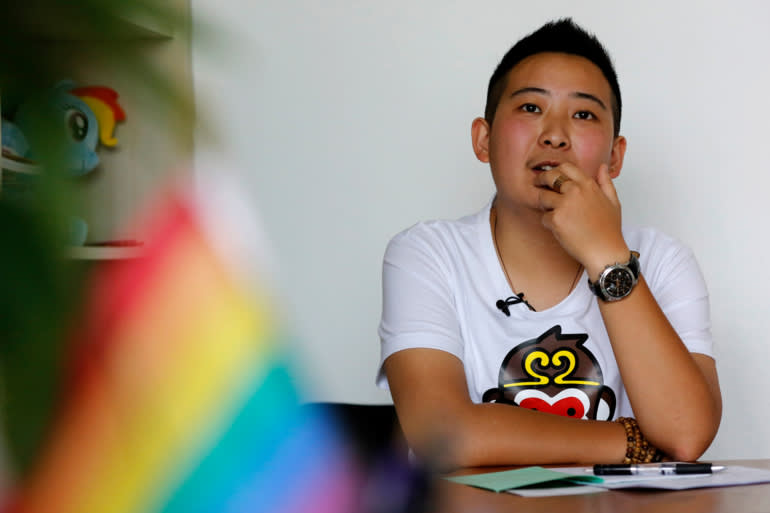 This file photo from May 2016 shows a transgender equal rights supporter whose employer in 2017 was ordered by a district court in the southwestern city of Guiyang to pay him the equivalent of $297 for violating his rights. It was the country's first such discrimination lawsuit.   © AP

There are no official statistics on the size of the trans population in China, but research carried out in 2020 by Zhang Yudi, a professor at the School of Humanities and Social Sciences, University of Science and Technology Beijing, found 30 transgender people in a sample of 10,590 from 26 colleges in 10 provinces. This works out at 0.28%, suggesting a transgender population of more than 4 million based on the latest United Nations estimate of China's population.

Life for trans people in China can be hard. An anti-violence guidebook issued in June 2021 by an online-based trans education center called TYEC tells the story of Xiao Lian, a transgender woman who fled to Beijing and attempted suicide after her parents reacted violently to her disclosure of her gender choice. Lian was taken to a psychiatric hospital but eventually released when her parents relented.

China's local courts are often hostile to trans aspirations. In a 2018 report the U.N. Development Program and China Women's University documented what happened when Gao Ting Ting, a married transgender woman, went to court in Jiangsu to contest a decision by Shanghai's East Hospital to refuse her sex reconstruction surgery. Liu Peilin, a 63-year-old transgender woman, writes in a diary in her bedroom in Fuzhou, Fujian Province, in November 2019.    © Reuters

The court ruled that Gao could not undergo the surgery because she would then be in an illegal female same-sex marriage. Eventually, an appeal court reversed the lower court's judgment, and told the hospital to bear the 50,000 yuan ($7,730) cost of the surgery. The appeal court said the initial ruling was subjective and out of line with global trends.

Cases like these prompted Huang, a trained psychologist, to set up the Trans Well-being Team in southern China in 2018 to provide mental wellness assistance and other services to trans people seeking to take control of their gender identities. Since then, she says, she has heard many stories of physical and mental trauma, including potential suicides.

"It's necessary to resolve their traumatic experiences first before they can make decisions on their own about what's next," says Huang, who often refers clients to social workers and reports serious abusive incidents to the police.

"Other big LGBT nonprofits also look for us if they need to give specific guidance to their transgender clients," says Huang, whose team of volunteers also uses positive and proactive transgender influencers from the popular social media channel Bilibili to inspire others.

"Some of them just want to totally leave their past behind once they succeed in moving to the new identity," says Ou Jiayang, a volunteer who focuses on building a good rapport with the transgender community. "However, I witnessed the hassles and discriminations when my transgender female friend went through the process of changing the sex status legally in the past." 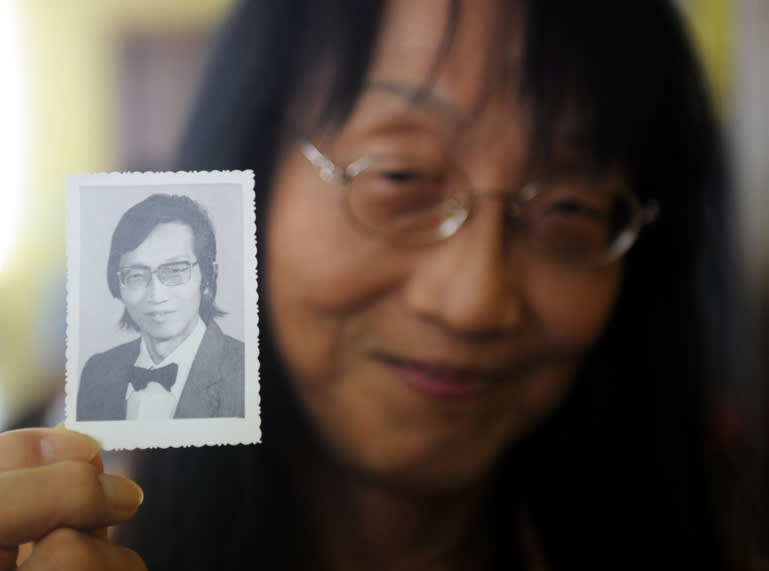 In this photo from 2012, calligrapher Qian Jinfan, an 84-year-old transgender woman, holds up a photo of herself she was younger. She made headlines at the time for being the oldest person in China to be seeking sex reassignment surgery.   © AP

Trans people from ordinary backgrounds can be hard to find -- they often have problems finding sympathetic friends and family members. But life as a trans person can be much easier for better-off Chinese.

"There's a common understanding that if a person can climb up the middle class ladder, for example like ... Jin Xing, they have the freedom to be whoever they want," says Ou. "That's why we focus on the lower-class people that are doubtful to their biological sex and struggling with their lives."

Trans Well-being Team works mainly online, does not have an office and has been forced by the COVID-19 pandemic to abandon its previous practice of renting space for physical meetings when necessary. "Clients prefer meeting up remotely because of privacy concerns," says Huang. "But the downside is that it's harder to control the environment and internet stability." Huang says she found inspiration in the example of Jin Xing, left, a transgender woman who found fame as a dancer and later became one of the best-known television presenters in China.   © AP

Despite the difficulties, Huang says counseling remains a vital service for many trans people, many of whom are distrustful and emotionally unstable because of their treatment by unsympathetic family members and work colleagues or by years of mental struggle with their gender identity.

This is a world with which she is familiar, having spent decades trying on her mother's and then her girlfriend's clothes when she was alone at home. For her, the story ends well. She decided not to undergo sex reassignment surgery, which saved a lot of time and eased the process of gender affirmation for her mother, and her girlfriend accepted who she was without resistance, happily continuing their relationship of nearly 15 years.

But Huang is keenly aware that many in China's trans community will remain trapped in their personal limbos until the country accepts radical reforms to make the process easier, more widely accepted and more open.

"We want more. The macro-environment needs a lot of changes," says Huang.