BANGKOK -- When Hong Kong's Tai Kwun Centre for Heritage and Arts opened in mid-2018 it was with considerable fanfare, for the rebirth of the former Central Police Station complex was the city's biggest conservation project, involving the transformation of 16 dilapidated heritage buildings.

The public response exceeded all expectations. The development -- a partnership between the Hong Kong Jockey Club and the government of the Chinese special administrative region -- was an instant sensation, named by Time magazine of the U.S. as one of its "100 World's Greatest Places."

By April 1, more than 2 million visitors had passed through the vast compound, which incorporates the former Central Magistracy and Victoria Prison, bolstered by winter and spring season events that included displays of performing arts, a book fair, and local history exhibitions.

"We wanted to create an interesting public space in the center of Hong Kong, and it is good to see that this important heritage site has now been revitalized and transformed into a vibrant cultural hub," said Hong Kong Jockey Club chief executive Winfried Engelbrecht-Bresges.

The site is the latest of many attempts to convert former colonial buildings around Asia for public use. Elsewhere in Hong Kong, for example, the former Police Married Quarters on Hollywood Road is now PMQ, a bustling arts center, and the former Marine Police Headquarters has become an outstanding example of architectural preservation.

Built in the 1880s, the historic Marine complex was converted by CK Asset Holdings under a Hong Kong government contract and is now named 1881 Heritage, housing luxury shops, restaurants, and House 1881, a hotel. 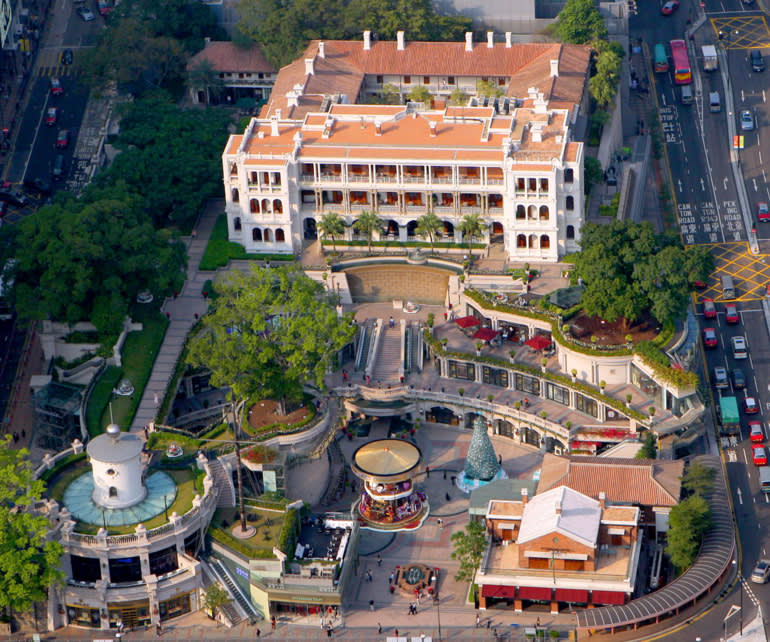 The main building of Marine Police Headquarters is transformed into the House 1881 hotel, and the signal tower into restaurants (Courtesy of 1881 Heritage)

Across Asia, the goal of mixed usage has underpinned an increasing number of restoration projects, allowing them to include art galleries, exhibitions, museums and other cultural events spaces, while paying for renovations and maintenance costs.

No. 3 Shanghai Bund, for example, is one of the Chinese city's most distinguished architectural landmarks -- a Post Renaissance style building erected in 1916 for the Union Assurance Company. Seven floors high, it was the first building in China to utilize a structural steel frame. Now restored and renamed Three On The Bund, it houses several restaurants, a bar, a club, and the Shanghai Gallery of Art. The Bund, which runs along the Huangpu River, houses a glittering collection of high profile names and has become a prime attraction for both tourists and locals, its promenade providing dramatic views of the skyline of Pudong. The Shanghai Club, at No. 2, is now the Waldorf-Astoria. Sassoon House, which became the Peace Hotel, is now the Fairmont Peace Hotel, its green copper pyramid roof forming a distinctive landmark. 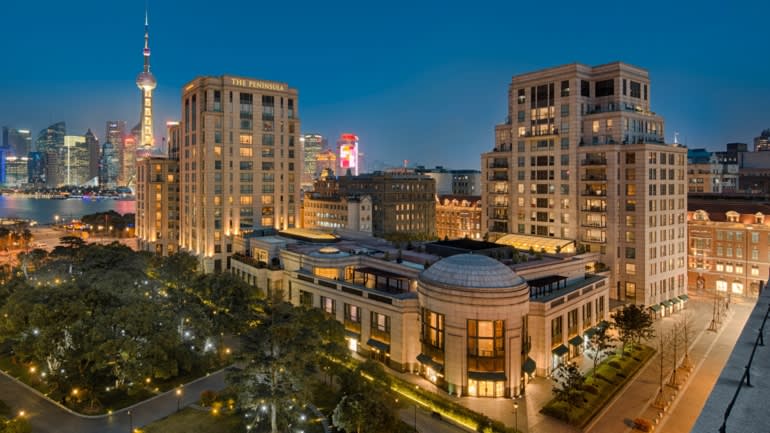 At the top of the Bund, where the Suzhou Creek flows into the Huangpu at Waitanyuan District, more than a dozen heritage buildings have been restored, including the former British consulate, now a hotel run by Peninsula Hotels, an arm of Hong Kong's Hongkong and Shanghai Hotels group. In Xuhui district a cluster of Shanghai's shikumen houses, a form that combines Western and Chinese elements, has been preserved. The Capella Shanghai hotel occupies some of these sensitively renovated lane houses. Capella received worldwide exposure last year, when a 2018 summit between U.S. President Donald Trump and North Korean leader Kim Jong Un was staged at the five-star Capella Singapore, a resort hotel on Sentosa Island. Originally constructed in the 1880s for British military units guarding Singapore's eastern coast, its restoration by the U.K.'s Foster and Partners and Singapore's DP Architects is a classic example of how new structures can be integrated with older ones.

Even prosaic warehouses can be brought back to life as hotels. Warehouse buildings dating from 1895, which had lain derelict on Singapore's Robertson Quay for almost 20 years, have been reborn as the award-winning Warehouse Hotel by the combined efforts of Asylum, a design agency, and architects Zarch Collaboratives -- both local businesses. In Myanmar, where downtown Yangon is a treasure chest of British colonial buildings in various stages of dilapidation, the impetus of the Yangon Heritage Trust is making itself felt in a series of renovation projects. Due for completion in July is the former Tourist Burma building, once Myanmar's first Burmese-owned department store, dating from the early 20th century. Turquoise Mountain, a U.K.-based nongovernmental organization, is undertaking the restoration, with the building slated to become a design center with restaurants and a roof garden. "We want this historic building to feel inviting to all, and one idea for doing this is to create a food court selling a mix of quality traditional Burmese food at affordable prices," said Harry Wardill, Myanmar director for Turquoise Mountain. "We feel this will not only encourage people to view the building as very much a public space, but the revenue generated will help to maintain the structure."

Within two minutes' walk of the Tourist Burma building stands Yangon's former Law Courts, built in 1927, which will reopen in May as the luxury Rosewood Hotel following renovation by Thailand-based renovation and decor specialists Kanok Furniture & Decoration and Myanmar's Jewellery Luck Group. Conservation of this enormous structure has been sensitive, with its massive bronze doors, teak handrails and timber shutters retained, and guests will enjoy a view of the river from a new roof garden. A couple of blocks behind Tourist Burma the former headquarters of the British colonial conglomerate Steel Brothers, built in the 1870s, has been renovated and is now the Yangon Excelsior boutique hotel. A short distance away, the Burma Railways building, erected in the 1880s, is being restored and will become a Peninsula hotel.

On the other side of Yangon's downtown district, the former colonial government Secretariat, one of the most historically significant buildings in Myanmar, is being restored with funding from Myanmar's Kanbawza Bank, with the work being steered by the Myanmar Cultural Heritage Company. The complex will hold two museums and commercial spaces. Another classic Yangon building, the Pegu Club, has just reopened after a costly restoration. The original warehouse structures is conserved at Asiatique. (Courtesy of Asiatique The Riverfront)

Neighboring Thailand was never colonized by Europeans, but Bangkok has a wealth of colonial-era structures along the Chao Phraya River that are being renovated to such dramatic effect that they are rejuvenating entire neighborhoods -- a process initiated at a disused pier and warehouses formerly owned by the Denmark-based East Asiatic Company at the unfashionable lower end of Charoen Krung Road. Dating from 1907, and unused for years, the warehouses were converted a few years ago by TCC Land, a Thai real estate company, into an entertainment complex and night market named Asiatique.

With its riverfront walk, 1,500 shops and stalls, 40 restaurants and brightly lit Ferris wheel, Asiatique has transformed this previously glum district into a powerful attraction for local and overseas revelers. Still in place, however, and carefully conserved, are the original warehouses, an old sawmill, a World War II bunker, tram rails and an enormous dockside crane. Festival time at Asiatique (Courtesy of Asiatique The Riverfront)

Toward the top end of Charoen Krung Road, behind the historic Portuguese Embassy building, seven large and disused warehouses were converted a couple of years ago by leading Thai architect Duangrit Bunnag into Warehouse 30, a fashionable center crammed with arts and technology start-up businesses, shops and restaurants. The action has spread along the riverbank, and an entire stretch has become known as Bangrak Creative District, with shophouses, warehouses and a century-old mansion built for a French wine merchant surging into colorful and busy life. A ferry crosses the river here to Klong San Creative District, Bangrak's opposite number on the west bank, where the most recent addition is Lhong 1919, a Chinese-Thai port building dating from the middle of the 19th century. The building, which still has a shrine to the Chinese sea goddess Mazu, houses 13 arts and crafts stores, along with a number of restaurants and shops. The quay has become a riverfront terrace.

As interest in the restoration of Asia's colonial-era buildings spreads, the next move seems likely to be more widespread renovation and gentrification of entire districts -- a development in which Hong Kong, previously an unlikely conservation champion, is emerging as a leader.

The industrial heartland of Kwun Tong has become the territory's newest hip district, with post-World War II factory blocks housing designers, musicians, entrepreneurs and artists alongside an attractive harbor-side park and promenade. There are malls, restaurants, and a brewery, and the Hong Kong Tourism Board is even promoting the formerly dingy area as a tourist destination. How times change.