NEW YORK -- It is made from all-American ingredients. It uses Brooklyn water. The head brewer watched lots of YouTube videos of Japanese sake masters.

Yet the finished product of Brooklyn Kura, the new sake brewery and taproom in Brooklyn, New York, is a thing of wonder. The peach-like aroma of their signature No. 14 and the ripe banana-like fragrance of the junmai blend are not derived from additives, but from the touch of koji, the rice mold that brewer Brandon Doughan sprinkles on the California rice, along with the temperature and humidity that the substance is kept in.

It follows centuries-old methods of Japanese sake-making, using deceptively simple ingredients -- rice, water, yeast and koji. The team, Doughan and his business partner Brian Polen, have high regard for tradition.

But they make do with what is available. Doughan uses a pizza shaker to sprinkle the koji. The sake is fermented in stainless steel tanks that were made for Italian wine.

Doughan seems quite content with his equipment. "Sake gets better with scale," he says from under his bushy orange beard. "In these big tanks, the change of temperature is gradual and that is good for the sake." Doughan mixes the steamed rice before it is mixed into the fermentation tanks. (Photo by Ken Moriyasu)

But how about the water? The most famous sake breweries in Japan are often located near clear streams at the foot of mountains or in quiet woods. "Brooklyn water is actually wonderful," says Polen, a former American Express analytics expert who handles the business side of things at Brooklyn Kura.

"It is soft and light and not dissimilar to water from North Japan. And hey, New York water is responsible for the world's best bagels and pizza!" he says. They filter the water to remove manganese, iron and chlorine.

The two met for the first time in Japan at a mutual friend's wedding in 2013. They both expressed their love of sake, and before they knew it, they were visiting sake breweries in Japan together.

After returning to the U.S., they started experimenting with sake-making at home. Doughan was a biochemist by profession and a home brewer of beer and soy sauce in his spare time. Home-made sake was surprisingly good, Polen said.

"Why is sake not a larger part of American culture?" they asked themselves. Fragrant, soft and easy to drink, it pairs well with most dishes. Most of all, it is much cheaper than wine. The sake that the Japanese Imperial family serves at banquets can be bought for around $30 to $50. 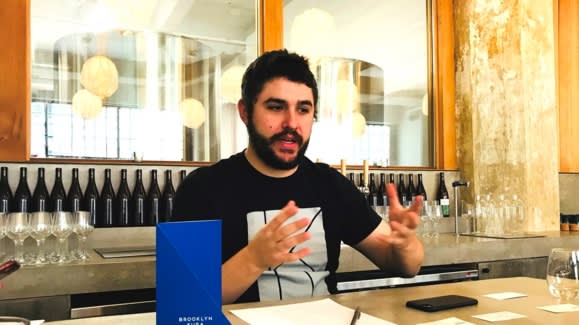 In 2016, they both left their jobs to pursue the American sake dream. They raised capital, bought their tools, experimented on making larger quantities of sake and last month they opened their kura, or brewery, and taproom in Brooklyn's Industry City, a waterfront warehouse that has been converted into an innovative complex of hip restaurants and retailers.

"It has a beautiful aroma," Chizuko Niikawa-Helton, a certified sake sommelier based in New York, said of the No. 14. Niikawa-Helton had kindly agreed to join this reporter for the kura visit. "It is like a gentle peach, not too dry, but light and juicy. Oh, I would pair this with white fish carpaccio with a drizzle of olive oil," she said.

Next on offer was the shiboritate, or "just squeezed," a rare straight-from-the-tank sip of fresh-made sake. A much tougher version of the No. 14, the shiboritate is "bitter but refreshing. Grapefruit," the sommelier said.

Polen, the president and salesman-in-chief, is slowly building a network of supporters who have agreed to serve the kura's sake. Those include the most popular and expensive Japanese restaurants in New York as well as ramen renegade Ivan Ramen.

The opening comes as other major Japanese sake breweries look to cultivate the U.S. market. Yamaguchi Prefecture-based Asahi Shuzo, famous for the "Dassai" brand sake, started construction this month on a $28 million brewery in upper New York's Hudson Valley, which will be the first major Japanese brewery on the U.S. east coast.

Starting in 2019, Asahi will produce sake made from local ingredients and plans to sell it at table-wine prices.

Brooklyn Kura's Polen welcomed Asahi's entry with open arms. "They are a great brewery," he said. "It will do so much for the education of sake drinkers in the U.S. I am bullish on the industry."