From tasting menus in Bangkok to wine pairing in Tokyo, coronavirus spurs innovation TOKYO -- In mid-June, on a Saturday evening in Bangkok, 40 guests of the Fruitfull Lockdown virtual dinner series sat in their homes, remotely clinking glasses and flashing peace signs at their "tablemates" across the city over Zoom, as live DJ music reverberated through their speakers.

Their fruit-themed multicourse menu, which was intended to highlight the topic of biodiversity, featured dishes created specially for the event by 10 of Asia's leading chefs, including Hiroyasu Kawate of Tokyo's Florilege, Dave Pynt of Singapore's Burnt Ends and Mingoo Kang of Seoul's Mingles. But the meal was prepared locally by chef Garima Arora and dispatched to each participant in eco-friendly, reusable packaging from her Michelin-starred restaurant, Gaa.

As diners tucked into tamarind-infused beef cheek with pomelo and durian dumplings in smoked coconut milk, the chefs took turns explaining the inspiration behind their recipes and answering questions over Zoom. The concept was creative highbrow delivery with an underlying message of sustainability.

When organizer Pete Phornprapha, whose production company Scratch First runs the annual Wonderfruit music festival in Thailand, began planning the Fruitfull project two years ago, he had envisioned it as a physical event -- "a deconstructed version of a food and wine festival" -- incorporating art and green design to "reach people who are not normally interested in environmental issues."

But after the COVID-19 pandemic forced the country into lockdown on April 3, Phornprapha pivoted quickly, coming up with the idea for the virtual dinners with the help of chefs Duangporn "Bo" Songvisava and Dylan Jones of Bo.lan in Bangkok and food writer Perm Paitayawat. Top: The lineup of chefs whose dishes were featured in Fruitfull's "Lockdown Series." Bottom: A screenshot from a May 22 Fruitfull event featuring a bento developed by Michelin-starred Japanese chef Yusuke Takada of La Cime in Osaka. (Courtesy of Fruitfull)

"We thought about how we could create an isolated dining experience using streaming technology so that people could enjoy food while connecting with chefs and ideas from around the world," Phornprapha says.

Faced with temporary closures and a precipitous decline in business, restaurants and bars in a number of Asian cities have been embracing online platforms as a means of staying connected and keeping customers engaged. They are discovering that people have been missing more than their favorite restaurant meals; what many dining at home craved most was interaction and the element of surprise that comes with live events.

After the Japanese government declared a nationwide state of emergency in early April, sommelier Yoshinobu Kimura, co-owner of Sushi M in Tokyo, suspended operations until June. In May, he partnered with a wine distributor to hold online wine seminars that included three-bottle wine sets delivered to participants' homes. Kimura taught wine basics and guided the group through tastings over Zoom, fielding questions and offering pairing recommendations for easy-to-prepare dishes such as mapo tofu and sweet and sour pork. "I was staying at home, trying to think of something different every day, and realized that I could do pairing," Kimura says.

Although Sushi M is back in business, Kimura hopes to continue the virtual seminars once a month. And in a twist that sounds like a reality-TV cooking show, he will invite participants to reveal the contents of their refrigerators and give recipe advice on the spot: "If they are willing to show me the ingredients they have, I can tell them what to make to match the wine."

In Singapore, where restaurants and bars were closed for more than two months, modern fine-dining restaurant Tippling Club developed three different digital offers. It started with weekly cooking classes conducted over Zoom to accompany meal kits delivered by Tippling Club staff members on bikes. Each package consists of precooked components that guests are instructed to reheat and plate, paired with a premixed cocktail by head bartender Andrew Loudon. Every other Saturday, Loudon also streams online cocktail master classes from the Tippling Club Bar, which is ranked 17th on the list of Asia's 50 Best Bars, from where he explains the history of the cocktail before the group assembles the drink together from preordered ingredients.

While the cooking and cocktail events are limited to between 20 and 30 participants, Tippling Club's virtual parties tend to be larger, more raucous affairs. At the end of May, the restaurant threw a "virtual tattoo party" themed after the Mexican Cinco de Mayo celebration that gathered 96 people for a night of tequila-soaked but socially distanced revelry. Each guest received a box filled with mixed drinks and nachos, two transferrable tattoos and a cocktail shaker, along with ingredients for a margarita.

"We wanted to get everyone involved as much as possible, and ended up doing the biggest-ever margarita shake of all time," Loudon says, explaining that the event was a riff on the restaurant's popular thrice-yearly tattoo parties, where the services of two resident tattoo artists can be procured with the purchase of two cocktails. Each of the 96 guests at Tippling Club's "virtual tattoo party" received a box filled with mixed drinks and nachos, two transferrable tattoos and a cocktail shaker, along with ingredients for a margarita. (Courtesy of Tippling Club)

The most recent virtual party, held on July 8 and 9, was a collaboration with three bars located in three countries -- the Philippines, Malaysia and Thailand. All the bars submitted original recipes and sent out the cocktails in their cities.

"This party had a more informative bent," Loudon says. "Each bartender talked about their cocktail and described how they'd battled the pandemic in their regions. It's a way of supporting each other when we can't travel."

Similarly, the aim of the Fruitfull project, Paitayawat explains, was to "boost morale and awareness" through different themes linked to "specific moments" during the lockdown. The first installment of the five-part series featured Bo.lan's Songvisava and Jones discussing the effect of the pandemic on local farms and the restaurant industry, while the last included an interview with a second-generation durian grower who harvests the fruit from more than 50 species of trees in the jungle, two hours north of Bangkok. 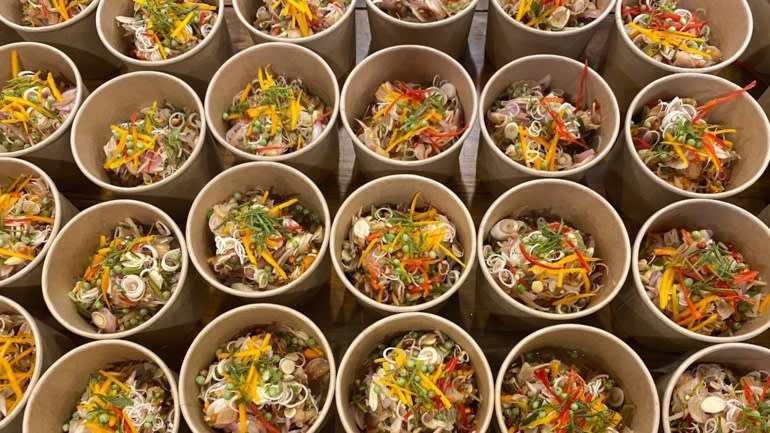 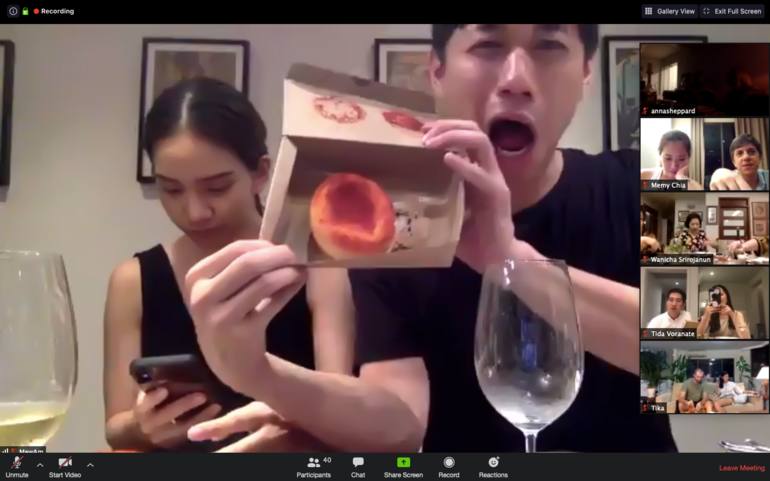 Top: Meals are prepped for a Fruitfull event. Bottom: A guest at an online dining event produced by Fruitfull reacts to one of the dishes sent to the homes of the participants. (Courtesy of Fruitfull)

"Over time, the message moved away from COVID-19 to shed light on food systems, food security and biodiversity," Paitayawat says. "These are the kind of stories people should be paying attention to. And [high-profile] chefs can help create a buzz." A portion of the revenue generated from meal sales was donated to Thai organizations that support local communities.

As more countries come out of lockdown and consumers return to restaurants and bars, demand for virtual experiences will wane. However, with international travel restrictions likely to remain in place in the near term, Phornprapha sees an opportunity for the Fruitfull online series to evolve.

"Our concept will remain quite fluid. We've been discussing a lot of ideas and thinking of our neighbors in Singapore and Hong Kong. What if we did a country exchange, sending out dinners from three countries at the same time?" he says. "It would be so much work but so much fun."