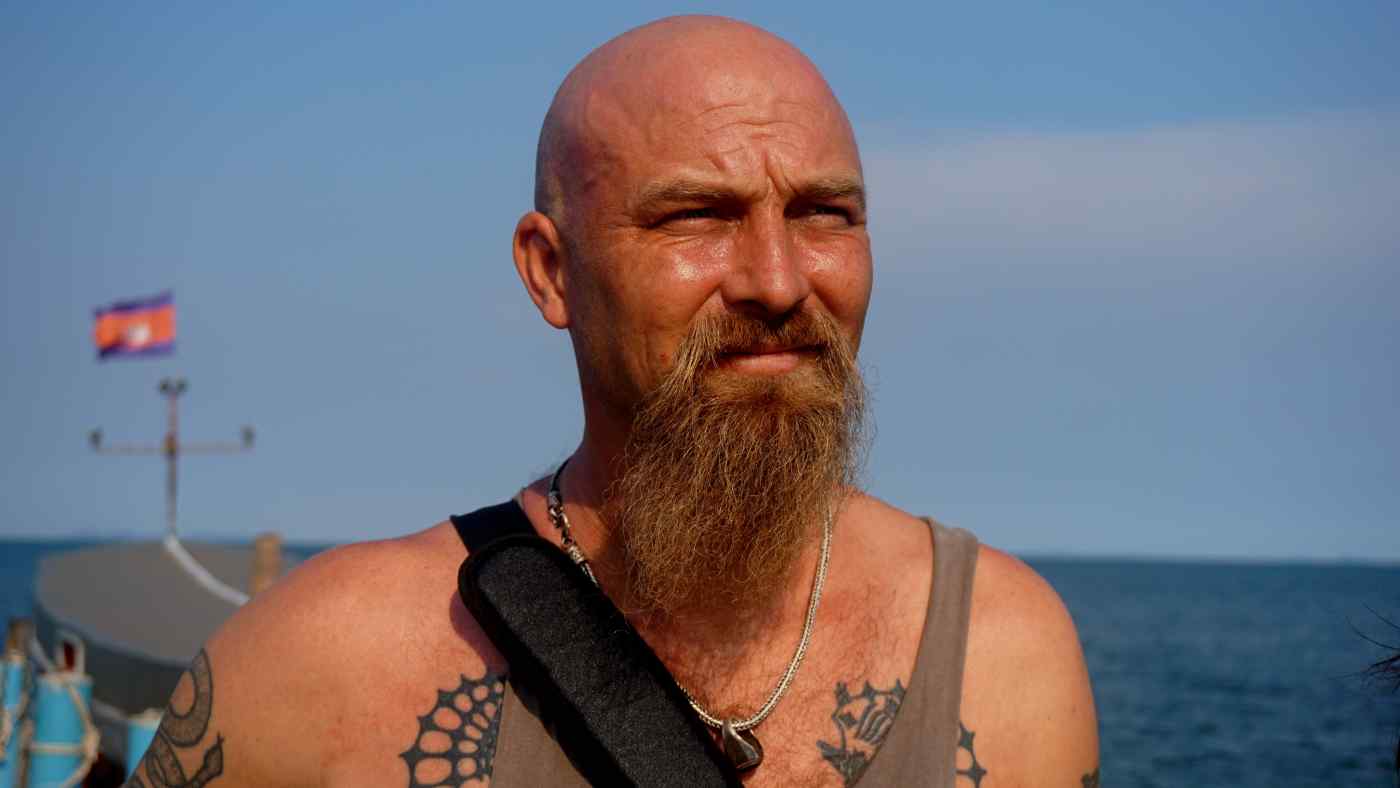 SEH ISLAND, Cambodia -- It is late afternoon when Paul Ferber scans the horizon and detects his number one enemy -- approaching Vietnamese seine trawlers. He knows that their kilometers long, fine mesh, bottom-dragging nets will in just one or two passes sweep away years of conservation efforts. "Dolphins, turtles, tiny sea creatures, seagrass -- there's no way anything can escape,'' he says.

Operating from a remote island off the Cambodian coast, Ferber sends up a drone to track the intruders and urgently alerts a network of informants and officials. A Cambodian patrol, armed with AK-47 assault rifles, rushes out to sea under cover of darkness. The three trawlers are driven back into Vietnamese waters.

The episode is a small but perhaps telling victory in a "war" against illegal fishing, which has taken a massive toll on Cambodia's once bountiful marine life. One expert survey ranked Cambodia top among 17 nations in Southeast and South Asia for illegal fishing in recent decades. However, a fightback against the poachers is being led by Marine Conservation Cambodia, a not-for-profit business established by Ferber, a 41-year-old Briton who was once a London florist.

MCC's biggest success came in April when Cambodia's Ministry of Agriculture, Forestry and Fisheries established an 11,354-hectare marine protected area within the Kep Archipelago, site of some of Southeast Asia's largest seagrass beds, which have been severely damaged by illegal fishing. Only small-scale, family fishing will now be permitted in the once fertile breeding ground.

A month earlier, 524 sq.-km of sea and islands further to the west were incorporated into the Koh Rong Marine Park, another protected sea area. A new fisheries law, currently being drafted, will toughen penalties for illegal activity. 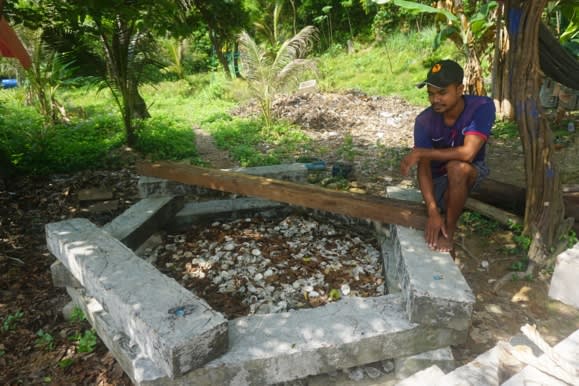 A Cambodian staffer inspects one of the concrete devices to re-grow reefs and stop trawlers in their tracks. (Photo by Denis D. Gray)

"We are all over the moon. I see a future for Kep's ocean that I didn't see before," said Ferber, whose team is getting ready to protect the newly created zone. MCC plans to drop more than 100 artificial reef structures onto the seabed -- heavy concrete blocks intended to attract marine life and serve as anti-trawling devices by entangling nets. The illegal trawlers "won't risk a $40,000 net on a concrete block," Ferber said. "The deterrent is going to be there.'' MCC will also continue patrolling the area -- "a cat and mouse game'' intended to stop Vietnamese, Thai and Cambodian fishermen employing seine nets, cyanide, dynamite and electrified nets that kill most nearby animals.

Before the authorities stepped up their fight against illegal fishing, Ferber and his Cambodian staff confronted the wrongdoers alone, armed only with "a slingshot and a bunch of rocks,'' he said. As they boarded boats and confiscated illegal fishing gear, they were shot at with rifles, and once with a speargun. One of MCC's boats was rammed and sunk. Death threats have been common, but ineffective: "We give them hell,'' said Ferber.

The stakes in Cambodia, and elsewhere, are high. Illegal, unreported and unregulated fishing in the Asia-Pacific region accounts for between 11 million and 26 million tons of fish a year, compared with 16.6 million tons caught legally, according to a 2017 report by Blake Herzinger, a private-sector maritime security adviser to the U.S. Pacific Fleet. The cost to Asia-Pacific economies is up to $23 billion a year in lost income, according to Herzinger. Amanda Vincent, a leading Canadian marine biologist, recently noted that many trawlers no longer target specific species but take sea life indiscriminately for the manufacture of low-value products such as chicken feed, fishmeal and surimi, a fish paste processed to resemble more expensive seafoods such as crab. This practice, which Vincent dubs "annihilation trawling,'' is one reason why Ferber came to Seh Island.

After several jobs in the U.K., including training as a policeman, he was exposed to a degraded marine environment while diving in Southeast Asian waters. Five years ago, he set up a simple compound on Seh where he, his Thai wife and four home-schooled children pursue a communal lifestyle, along with Cambodian staff, volunteers from around the world and often a scientist-in-residence. The most recent of these, British marine biologist Sarah Tubbs, is researching Irrawaddy dolphins in the Kep Archipelago, hoping to prompt legislation to protect this endangered species, which was once numerous along Southeast Asian coastlines.

Ferber's initial focus was on the seahorse, a tiny, much-loved creature. More than 20 million are harvested each year, mostly in Asia, where they are ground into powder or dried and eaten whole. Users of traditional Chinese medicine believe, despite lack of scientific evidence, that eating seahorses cures problems from kidney disease to baldness. Some end up in aquariums, or as key rings, encased in jewelry. 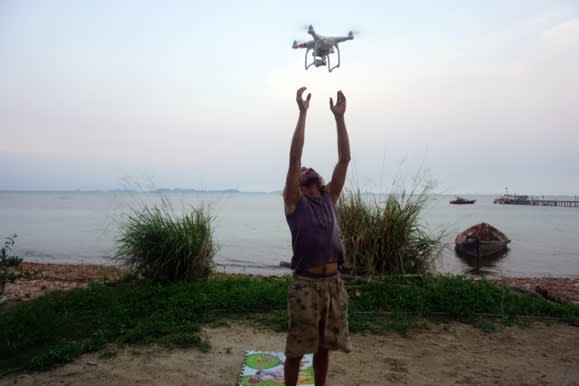 A volunteer retrieves a drone sent out to locate and photograph illegal trawlers off the Cambodian coast. (Photo by Denis D. Gray)

Ferber, who has a pair of sea horses tattooed on his chest, realized that to ensure their survival in Cambodian waters action had to be taken against the trawlers, which entrap countless numbers in their fine-mesh nets. Shortly after arriving on the island he was permitted to set up a conservation zone around its shores -- recently expanded to 300 meters from land -- where seahorses are protected and "tattooed'' by injection with a special dye to allow tracking. In a country where criminals often ride roughshod over those who threaten their power or profits, Ferber's activities have rendered him vulnerable. More than 20 environmental advocates and campaigners have been killed in Cambodia over the past decade, but Ferber said he has probably remained safe because of "very, very strong support from the higher levels of the provincial and central governments.'' He has also benefitted from international recognition and financial support, largely from the International Conservation Fund of Canada.

Ouk Vibol, who heads the ministry's Department of Fisheries Conservation, said MCC is "one of our good partners, so we thank Paul for what he and his donors do for us.'' Vincent added that Ferber has "enormous courage in tackling real problems with minimal resources. If I had a Paul in every country where we work my life would be much easier. He is not one of life's bystanders.''

The future is unlikely to be any easier for conservationists in Cambodia. Corruption at the local level is rife. Near Kep, Ferber notes, there are about 40 illegal trawlers protected by powerful interests. Kith Meng, a tycoon close to Prime Minister Hun Sen, retains a lease on two islands within the new national park, with plans for casinos, an airport and a golf course, valued at some $2 billion. "We are doing our best, but our resources are very limited,'' said Ouk Vibol, noting that Cambodia lacks patrol boats to intercept illegal trawlers.

On a recent dive in the conservation zone around Seh Island, optimism prevailed over the still looming threats. Below, on the sea bed, a reef was beginning to form around the first concrete blocks dropped a year ago by Ferber's team. Barnacles and algae, which clean the water and provide food for fish, clung to the artificial structures, serving as a kind of nursery for juveniles, with larger fish swimming around them.

"We put these into an area like a desert, horrifyingly devoid of life, and within as few as two to three days they become oases in this desert, mini-ecosystems amid this devastation,'' Ferber said, adding that an assessment of the zone in 2016 detected 15 fish species that had not been found there before the creation of the conservation zone. Ferber said the clear improvement in the ecology of a tiny patch of Asia's troubled seas offers proof that renewal is possible.

Near the blocks, through the turbid water, a pair of mythical lions came into blurry view -- eerie statues often found poised at the entrances to Buddhist temples. Cambodians believe they make excellent guardians.