The inside of one of the ocean villas, where upcycled materials and top of the range furniture blend to give guests a unique luxury experience (Photo by Kit Yeng Chan)
MARCO FERRARESE, Contributing writerDecember 2, 2018 17:37 JST | Myanmar, Cambodia, Laos
CopyCopied

Breakneck Chinese-led development has choked this town's once spacious boulevards. Long stretches of the once-pristine coastline are now lined with construction sites. Dozens of cranes soar above a skyline of expensive high-rises and more than 55 casinos that are catering for the gambling habits of a fast-rising tide of Chinese tourists. Another 50 are expected to open within the next year or so, according to local officials, potentially transforming this once laid-back backpacker town into a tropical version of Macau.

"We love it here," said Wang, an elevator installation worker from Hubei, China. His colleague, Chou, agreed: "There are many different types of cuisines here, Chinese, Korean, Mediterranean, and we love the sea. We don't have it where we come from," he told the Nikkei Asian Review.

The hotels, apartments and casinos these workers are building are a big draw for Chinese visitors. But the rapid urbanization of the coast around Sihanoukville is threatening the ecosystem of the Koh Rong archipelago, a cluster of islands southwest of the city. Some island resorts are luring growing numbers of tourists despite being part of a 450 sq. km marine reserve, the country's first large-scale protected marine environment, since June 2016.

In February, the reserve was expanded to 524 sq. km, and declared Cambodia's first national park. However, a $2-billion island tourism development planned by Royal Group, Cambodia's largest conglomerate, is going ahead on Koh Rong and Koh Rong Sanloem, the archipelago's two biggest islands. The group has already opened a resort on Koh Rong, and an airport, golf course and marina are expected to follow. But just an hour away by boat from Sihanoukville, the waters of the archipelago turn from murky to crystal clear, largely thanks to the efforts of an Australian couple, Rory Hunter and Melita Koulmandas Hunter, who acquired the islands of Koh Ouen and neighboring Koh Bong, just northeast of Koh Rong, in 2008.

Together, the two small islands are known as "Song Saa," which means "the Sweethearts" in Khmer and is also the name given to a Hong Kong-registered charity set up by the Hunters which operates in Cambodia as a nongovernmental organization. The Song Saa Foundation works with local researchers and villagers to try to restrict development and conserve the archipelago, and supervises a separate marine reserve around the two islands that was established by the Hunters in 2007, together with an five-star eco-resort on Koh Ouen.

"We have established a 200m-wide marine park zone all around the Song Saa islands, where fishing boats are not allowed to come any more," said Heng Ngoun Chhay, 38, the foundation's marine research and conservation officer. A native of Koh Rong island, Chhay recalled that the sea was filled with turtles, dolphins and sea horses when he was growing up in the 1980s. That changed after the arrival of fishermen from nearby Thai and Vietnamese waters, who taught the locals to use bombs and cyanide for fishing. Plastic pollution also began threatening marine life, eventually reducing the marine population to a few sea urchins, he noted. "We are trying to rehabilitate and conserve the marine environment, and we'll soon deploy an artificial reef to create more habitat and improve the existing corals," said Chhay. "We also do weekly clean-ups to reduce plastic waste impact, [and] a monthly community clean-up at Prek Svay village, the biggest settlement on Koh Rong. And once a year, we host a big coastal and marine clean-up event on all the beaches in the archipelago, calling up our partners from the Cambodian Fisheries Administration team [a government agency] and other partners and businessmen who support the cause."

The Hunters, who formerly lived in Phnom Penh but now run the foundation from Hong Kong, said they discovered the archipelago in 2006 as they explored the islands in an old fishing boat. A chance stopover on Koh Ouen for lunch led to a lucky encounter.

"It was here in this small, family-run fisherman's home, sitting on the floor sharing food that the head of the family explained that the waters were over-fished, and that it was becoming harder to feed his family," said Melita Koulmandas Hunter, executive director of the foundation. "He told us he had some land back on the mainland and wanted to take his family there and go back to rice farming. He looked at us and said: 'Do you want to buy my island?' We both said 'Yes.'" A walking footpath from the Song Saa resort to Koh Bong, an unspoiled island (Photo by Kit Yeng Chan)

The couple's concept of an ecologically focused tourist resort developed after they started working with locals to clean up rubbish that had accumulated over the previous decade on the larger island. The Hunters decided to set up a solid waste management system, as well as a marine protected area.

"It was during this clean-up that we got to know the islands and the local villagers and fishing communities. We learned very quickly how fragile the ecosystem really was, and that the fish stocks where on the brink of collapse," Koulmandas Hunter recalled. "This meant that in order to survive and feed their families, people were starting to go into the jungle to chop timber, and were trapping wildlife to sell for food. In a very short amount of time, we felt how quickly this pristine environment would begin to dissolve."

The couple's solution was to set up a "no take zone" around the two islands to see whether the depleted fish population would recover with time. Numbers began to improve within 18 months, and academic research suggests that marine life has continued to prosper. A 2013 paper in the Cambodian Journal of Natural History reported significant species diversity in a number of research sites, and a 2015 paper in the same journal identified rising numbers of fish off Koh Rong's northern coast. 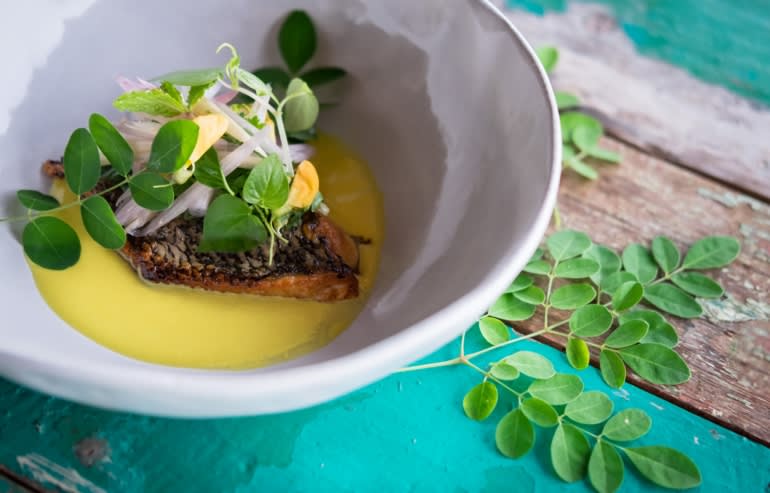 Today, the Song Saa Resort hotel -- a collection of luxury jungle and over-water villas that incorporate recycled fishing boat parts as furnishings -- helps to support the costs of running the local conservation operations, and has helped encourage awareness of sustainable tourism in the region.

"Song Saa has been able to raise a very high bar, demonstrating that there is a well-heeled, educated traveler looking for unique experiences," said Koulmandas Hunter. "Our project paved the way for other well-respected brands such as Six Senses and Alila to also come into the market. And as more and more developers look to set up on the islands, it is fantastic to see how many are wanting to bring the ethos of development done lightly, and look after local communities and their surrounding environments."

Six Senses is a Thailand-based luxury hotel group that runs a resort on nearby Krabey Island; Singapore-based Alila operates an ecologically focused luxury resort on the nearby island of Koh Russey.

In a push to widen its activities, the foundation is now working on a project to establish a reserve in Banteay Srey, a village to the north of the Angkor Wat temple complex near the western Cambodian town of Siem Reap. Plans include developing tourist facilities there while re-establishing indigenous flora and fauna, restoring rainforest and wetlands communities, and conserving the local heritage.

"We are partnering with the world's best developers, hotel companies, designers, technologists, conservationists and thought leaders," said Koulmandas Hunter. "We want to create a pioneering destination for tourists to experience Cambodia's unique cultural heritage, natural beauty and personal charm, and also be inspired to make a difference in the world."