Can foreign chefs save Japanese cuisine from extinction? TOKYO -- As younger Japanese abandon rice, miso soup and grilled fish in favor of such overseas fare as bread, curry and ramen, a relatively recent adoption from China, foreign chefs are increasingly seen as the unlikely saviors of the country's centuries-old culinary traditions.

First-year students at the Tokyo College of Sushi and Washoku -- what traditional Japanese food is called in Japan -- are engrossed in slicing daikon radish into a long, razor-thin ribbon. Their curriculum begins with exhaustive training in the foundations of Japanese cuisine, from making the perfect rolled omelet to filleting fish.

More than half of the students at this institution come from abroad.

Marissa Aboga Sulit, 33, from the Philippines, enrolled after tasting a kaiseki -- a traditional multicourse meal -- on a trip to Kyoto. She struggled with omelets at first and practiced over and over at home. She plans to study traditional Japanese confectionery after graduation and dreams of opening a restaurant.

A 23-year-old from China, Wang Junpeng, was mesmerized by the chefs who taught his trial introductory class. He now gets to school at least an hour before classes begin to help prepare plates and broth. He has never missed a day, despite frequent injuries when first learning how to use a knife.

You can make delicious food if you work hard, regardless of what country you come from, Wang said. He will work at Ginza Kojyu, a prestigious kaiseki restaurant in central Tokyo, starting next spring. 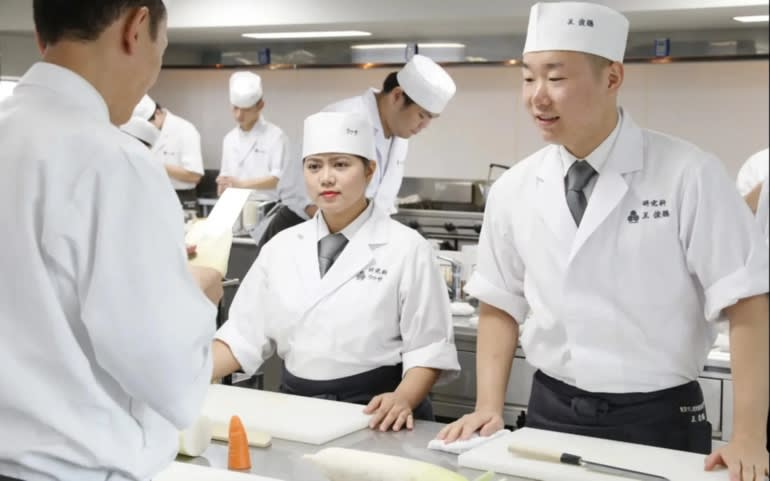 Marissa Aboga Sulit of the Philippines and Wang Junpeng of China, both students at the Tokyo College of Sushi and Washoku, watch their instructor ribbon a radish. (Photo by Jun Takai)

Industry insiders lament the shortage of aspiring chefs looking into Japanese cuisine. Culinary students tend to flock to Italian or pastry courses, partly because of stereotypes about rigid hierarchies and grueling apprenticeships in traditional Japanese kitchens.

The Tokyo College of Sushi and Washoku, the nation's sole culinary school focused exclusively on sushi and other Japanese food, has instead garnered more attention than expected from foreign students. "There's a lot of demand for chefs who speak other languages, because of the tourism boom," President Masaru Watanabe said.

Logistical hurdles stand in their way. Foreign chefs can obtain skilled work visas only if they work in foreign cuisines, such as French or Chinese. There is a special quota for those in Japanese cuisine, but they must return home after a maximum of five years.

"I want him to show the world what real Japanese food looks like," Kurisu said. Tan, now 28, began training as a Japanese chef after eating sushi all over western Japan on a graduation trip and began working at the Ginza's famed Sushiko in 2016 as a trainee under a special government program.

"He really loved sushi. You could even call him a sushi nerd," Sushiko head Mamoru Sugiyama said. Tan was always practicing how to make the rice balls for sushi using a piece of cloth, Sugiyama said. Tan also used to go to the now-defunct Tsukiji fish market on days off, befriending people even Sugiyama did not know.

On what makes Japanese cuisine unique, the Singaporean used English to describe it as "natural" and "refined" and called its presentation "elegant."

A key aspect of Japanese food is the chef's intention, in the apprentice's view. The Singaporean does not know whether this concept will be widely accepted abroad but hopes to eventually open a sushi restaurant.

Despite becoming one of the world's largest export economies, Japan has always struggled to find a market overseas for its lesser-known foods. But cultivating foreign interest is critical as the domestic market shrinks.

"We need to leverage the growing popularity of Japanese cuisine to boost food exports and send more restaurant operators abroad," said Kyoko Nishi, who is in charge of promoting Japanese food culture at the Ministry of Agriculture, Forestry and Fisheries.

Kanpyo -- strips of dried gourd that have been an important part of traditional cooking -- is a popular filling for sushi rolls and dates back some 300 years. But output in Tochigi Prefecture, which produces almost all of Japan's kanpyo, dropped to 260 tons in 2017 from a peak of roughly 5,000 tons in 1978. Many aging farmers have abandoned the labor-intensive process.

"There will be no future in five or 10 years if it goes on like this," kanpyo wholesaler Shigeru Izawa said. He visited Thailand in 2011 to show local workers how to prepare the product. Shigeru Izawa demonstrates how to make kanpyo, a popular sushi filling made from dried, shaved gourds. (Photo by Yoichi Iwata)

Izawa's company began importing kanpyo from China. But it how long that nation's own aging farmers will produce something they can sell only in Japan is unclear.

Product from Thailand makes up about 5% of what Izawa now sells. He plans to increase this once is stable production is achieved there and plans to start a trial in Laos this November.

"It's not the kind of thing you eat year-round, but I want people across Japan to be able to enjoy it," he said.