As India's economy expands, the Big Apple's appetite for the cuisine may follow 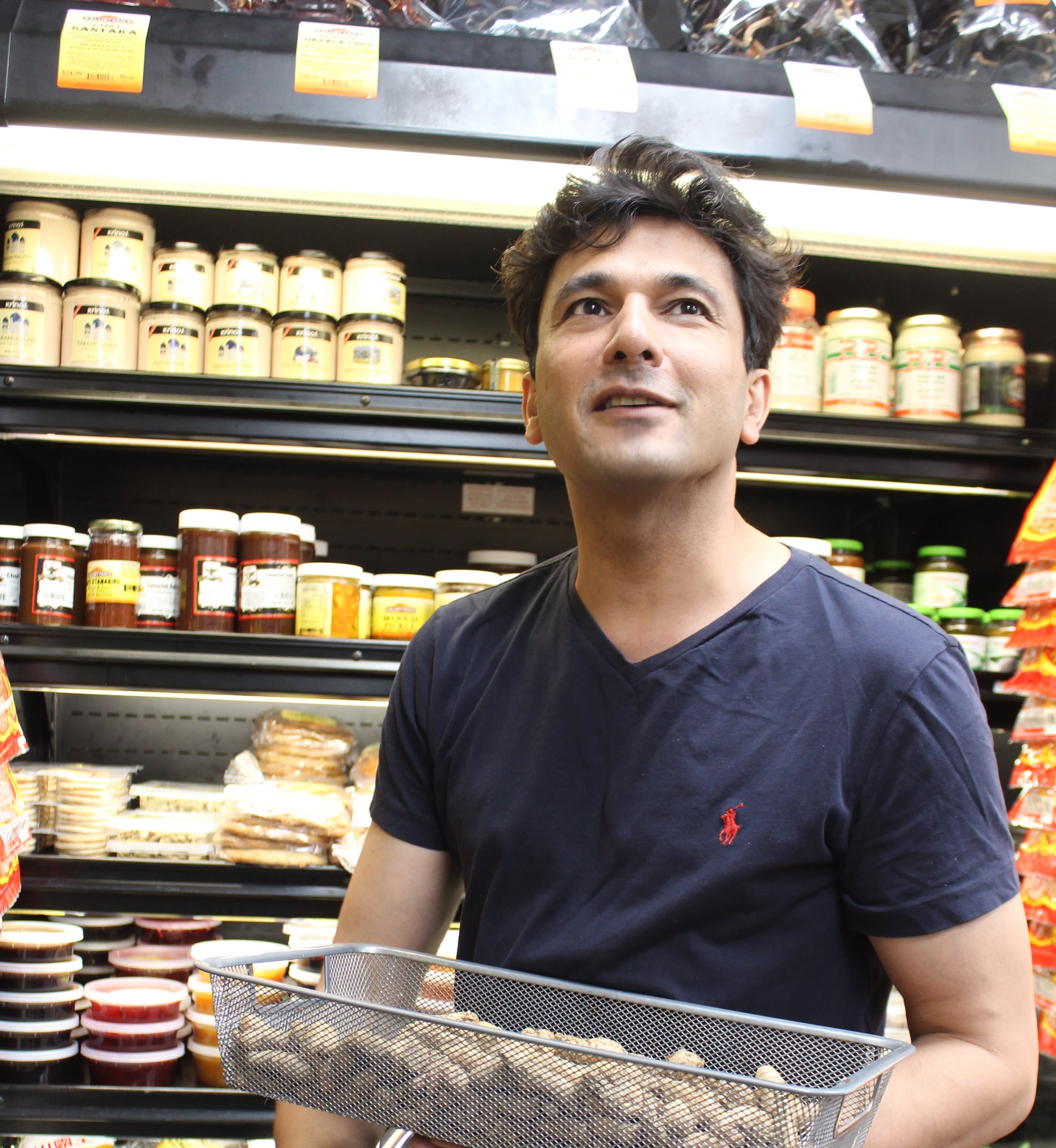 The founder of the Michelin star-winning New York restaurant Junoon says such a title is more fitting for dignitaries like Indian Prime Minister Narendra Modi, whom Khanna cooked for on the sidelines of the U.N. General Assembly in 2015.

"The prime minister and his team said, 'We are having 45 people for dinner. We want to serve these people a real taste of India,'" Khanna recalled in a recent interview with the Nikkei Asian Review.

His challenge was to create a meal that showcased India's diverse cuisine to dozens of the world's top CEOs, representing the likes of Ford, IBM and Lockheed Martin, with a net value of $4 trillion -- not the easiest crowd to please when it comes to culinary experience.

To make matters more complicated, the prime minister is vegetarian."So I did two menus," Khanna said. He ended up serving nearly 50 dishes -- most of which were completely foreign to the American guests, he added.

Much of the most well-known Indian food in the U.S., like tandoori chicken, naan, roti and parathas are from the Punjab region, where Khanna's hometown of Amritsar is located. But only one dish from his hometown made it on the menu at the Waldorf Astoria that night.

"It would be unfair for me not to bring attention to the other parts," he said of the lesser-known regional dishes. Each dish drew inspiration from an Indian festival and held a story of a different region, culture or state, he noted.

The colorful dishes he served to the CEOs -- from roasted nuts topped with gold leaf and sea bass with purple chutney to chicken rouladen in an orange vindaloo sauce -- were a reflection of India's diverse culinary tradition.

"You have made India proud," Modi told Khanna afterward.

Khanna's journey began in Amritsar, a city in northeastern India.

"Food represented total secularism, the democratic values of India, what it was built on."

As an Indian child born into a home of modest means, Khanna grew up on a diet of mostly vegetables, eating meat only on the first Sunday of the month. He credits his grandmother with introducing him to a more diverse array of food by bringing him to the kitchen at the temple in his hometown, where residents helped to cook and clean, receiving free meals in return.

It was the experience of cooking there that "instilled a value in me," he said. "Food represented total secularism, the democratic values of India, what it was built on."

Khanna was born with a disability that made it difficult to walk. Unable to play sports with other children outside, he spent much of his youth helping his grandmother with the cooking.

"That was the only way I could escape the real world. So she became my lifeline, my whole thing," he said.

Despite his disability, his mother was convinced that her son was destined for greatness. Rather than walking, his mother told young Vikas that he would one day fly.

And fly he did. In 2007, the 29-year-old chef decided to cast his lot with the center of the culinary universe that is New York City. Khanna shows the vivid inner color of fresh turmeric, his favorite ingredient to cook with, at Kalustyan's, a spice store in New York's "Curry Hill" neighborhood.

But soon after his arrival here, his fortunes took a turn for the worse. Khanna was sleeping in a homeless shelter, left almost penniless after the deli he worked at unexpectedly closed.

"That was one of the lowest times of my life," Khanna said.

Yet it might also have been the most formative for Khanna. Art -- in this case, the art of cooking -- "needs textures; and those experiences in your life give you textures," he said.

Khanna started cooking for his fellow residents at the New York Rescue Mission. "Working in their kitchen was very hard because I used to see broken people all day, all night long," he said. "But it would give me happiness when they ate my food."

"You tell a much bigger story" when you've been broken, reconstructed and repainted, Khanna says.

The entrepreneurial-minded cook eventually received permission to use the kitchen for money-making ventures. With what he considers the pure luck of the draw, Khanna was able to escape homelessness and chart a path to success.

Though securing a visa to travel to the U.S. was not too much trouble for Khanna in a pre-9/11 world, he experienced his share of racism as he struggled to break into New York's competitive cooking scene.

At a recent lecture at the Asia Society in New York, Khanna talked about a detractor who told him he would never amount to anything. "I said, is it my English sir? And he said no, and he looked at my skin," Khanna said.

"It was a wake-up call for me," he said. "It was somebody telling me that your work, your art, your craft -- whatever you will produce will depend on your pigmentation."

Khanna, of course, was not deterred by the racist remark. "A lot of people will decide how far you can go depending on your pigmentation -- you don't let them decide. You decide for yourself."

Currying favor of the big city

The popularity and prestige of the South Asian nation's flavor-packed dishes continue to lag behind other "ethnic" foods, but the tide may finally be shifting.

"I see that there's such a big change happening now -- as Indians, as a community -- you see that they're traveling and experimenting more," Khanna said, suggesting that their growing economic power is elevating the cuisine's stature.

According to Krishnendu Ray, an associate professor in New York University's Food Studies program, Indian food is likely to gain in popularity, but is still a long way from achieving the prestige of other cuisines such as Japanese and Italian.

Two factors responsible for an ethnic cuisine's success are the country's economic and cultural power -- i.e. soft power, as well as how many poor immigrants are coming from that country, Ray told the Nikkei Asian Review. As long as poorer immigrants continue to come in from India, the perception of the cuisine as mostly "cheap curry" is likely to stick, he suggests.

There was also a time when the American public turned its nose up at both Japanese and Italian food. Ray cited a study conducted in Hawaii, back when many Japanese immigrants were working class and poor, that found the perceptions of Japanese food were extremely low, with their fish-and-rice diet believed to be unhealthy.

A far cry from how Japanese cuisine is viewed now. In his recent book "The Ethnic Restaurateur," Ray found that Japanese food is now the second-most expensive cuisine in New York, surpassed only by French food. Indian is toward the other end of the spectrum, alongside Chinese and Mexican. The difference? Few immigrants that come to New York from Japan are poor.

"There are about 400 Indian restaurants in New York City, out of which, about 380 ... basically serve cheap curries: buffets where the maximum you can charge is $15, maybe $20 for a main course," Ray said. Ten of the remaining 20 are mid-level restaurants -- which Ray sees expanding the most in coming years -- and the other 10 are high-end restaurants, where Khanna's restaurant Junoon falls.

A strong sign that a cuisine has achieved penetration into the American market is when consumers are able to identify regional differences in the cuisine, Ray noted.

In that respect, Chinese food -- which foodies have begun to separate into regional categories like Szechuan, Peking, Cantonese, and Xi'an -- is ahead of Indian.

"I think they will find their own cycle," Khanna said of the prospect of India's many regional cuisines making their way into the American consciousness. 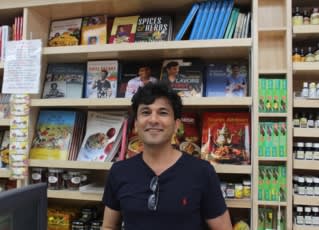 Khanna in front of cookbooks at Kalustyan's

"I think the next generation [of chefs] is much better than us," he noted, adding that his own cooking follows a traditional approach. "We didn't have these big ambitions, but when you meet a young chef, they're carving their own niche."

Earlier in his career, Khanna was once advised against writing Indian cookbooks as it was not considered a profitable proposition.

But again Khanna ignored the advice and went on to author 27 books. And now his gold-embossed cookbook "Utsav" -- copies of which have been presented to the likes of President Barack Obama and Prime Minister Modi -- recently took the title of world's most expensive cookbook.

"Imagine if I was just listening to what people said," said Khanna. He no longer remembers the name of the person who disparaged his dark skin. Now a celebrated chef, Khanna has served prime ministers and presidents.

Khanna will continue to take on the world's nonsense with his cooking. "Not in verbs, not in verbal language," he said. "We need to contest it in work and practical forms."