BANGKOK -- Kongwuth "Kong" Chaiwongkachon nearly gave his life so that Thailand's wild bees could live. Returning to his restaurant in Chiang Rai from an annual Bangkok dinner promoting forest honey collected by hill tribes, he suffered major injuries in a car crash. "Nearly everything was broken from the neck down," says Kongwuth.

A year after the accident, however, the proprietor of the northern Thai city's Locus Native Food Lab restaurant is back to doing what he loves best: highlighting seasonal northern ingredients, promoting sustainable and organic farming and learning from the region's ethnic Karen hill tribes how to forage for herbs and rare vegetables in nearby forests.

In particular, Kongwuth is awaiting this year's collection of wild beehives. "Honey," he says, "is what I call liquid gold -- my way to communicate that everyone can do something to fight against modern ruin, pollution, global warming."

That would be impossible without the guidance of the Karen, who live in Myanmar, Laos and northern Thailand. "The Karen people have lived with the wild for thousands of years," says Kongwuth. "They have a saying that if you drink from the pond, you better keep the pond clean. If you eat from the forest, take good care of it."

His initial contact with the hill tribe followed in the steps of another environmentally minded chef, Phanuphon "Black" Bulsuwan, who uses his Blackitch restaurant in Chiang Mai, the largest city in northern Thailand, as a base for research and community outreach. 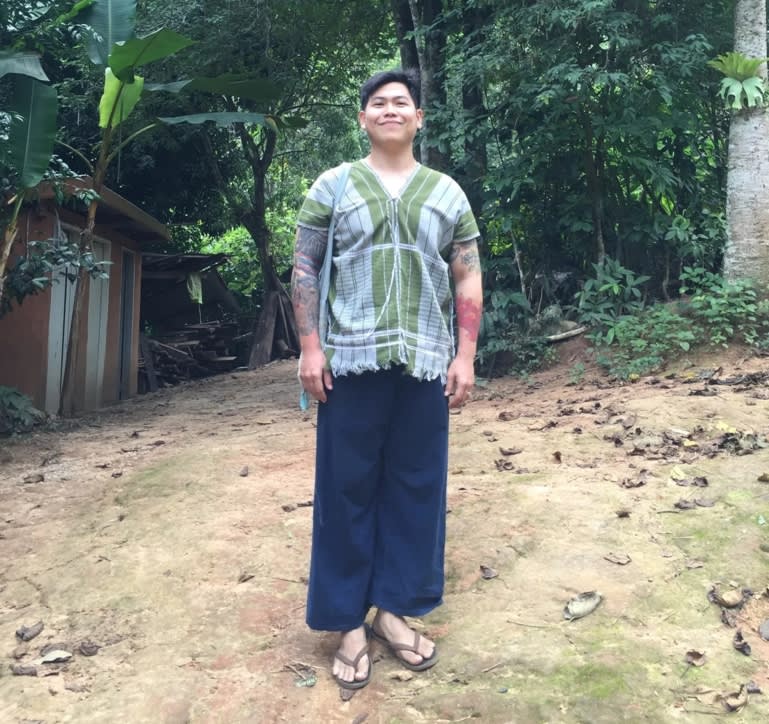 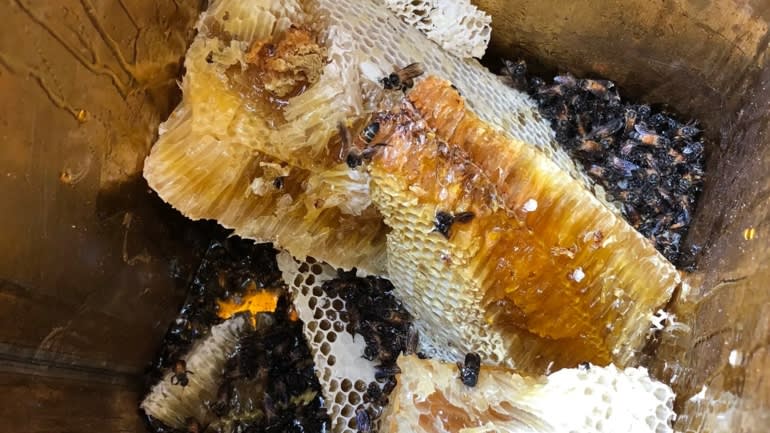 Curious about local farming methods, and eager to see how some tribal peoples grew up to 100 types of produce a year, Phanuphon joined a workshop in the village of Hin Lad Nai, in neighboring Chiang Rai Province, set deep in the Khun Chae National Park.

Hin Lad Nai, little more than 20 households yet less remote than it sounds, had been given a "Forest Hero Award" in 2013 by the United Nations Forum on Forests. It is also self-branded as an "eco-village," along with several others in the region, for its successful reforestation of blighted areas and loyalty to controversial practices of controlled burning that have been proved to reduce carbon output. Chaiprasert Pokha, leader of the local Karen people (who call themselves the Pgaz K'Nyu) has become an important teacher of ancient practices.

"Living better with nature," as Phanuphon puts it, the villagers produce coffee, tea, rice and Sichuan peppers, and forage for edible plants deep in the 3,200 hectares of forest under the village's management. "If we walked there alone, we wouldn't find anything -- they all look like weeds," says Phanuphon. But he and other chefs learned how to identify all that the forest could bestow, becoming particularly intrigued by the Karen's knowledge of beehives, even though recent summers have become too hot and dry for optimum honey production. Admitting that the first workshop he attended initially bored him, Kongwuth recalls that "by the third day, I had fallen in love with honey."

On many return visits, he witnessed the skills required to find and collect the wild bees' hives. "Among numerous types of bees the royal bees are best, but they create hives the highest up, and always [aligned] north-south to protect against direct sunrise and sunset, making them extremely hard to locate. Even with a zoom camera, I couldn't see them," Kongwuth says. "The Karen collectors just sit quietly so they can hear the sound of bee swarms." 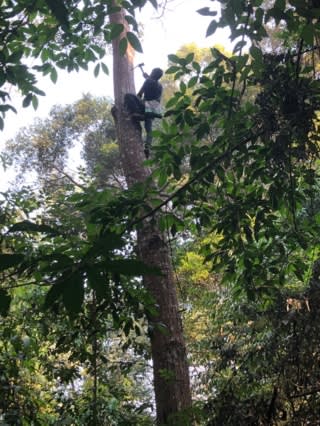 A seasonal collector scales a tree after spotting an elusive beehive. (Courtesy of Kongwuth Chaiwongkachon)

To collect the honey they sometimes have to climb 30 meters or more ("without safety nets," Kongwuth adds) by driving sharp bamboo ledges into tree trunks to form a ladder. Using large pales, the tribesmen eventually take around 60% of the hives, always "leaving the bees to live and continue," according to Kongwuth.

The harvesting process is completed in the village, where the honey is left to drip out of the hives for three days and filtered through cheesecloth to remove insect eggs. Taste and color varies, and the honey is sometimes heated during bottling to reduce moisture content -- something done naturally in the hives by "bees generating heat by wriggling their wings," according to Kongwuth.

The honey is best harvested in April, toward the end of the region's hot season. It can be ruined when the rains begin in May, "but the villagers know when storms are coming by listening to the crickets," says Kongwuth. "They sing differently, and the ants move differently, before rain." 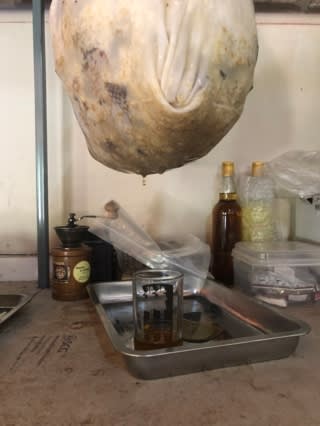 The Karen do not traditionally eat their sweet bounty. They have a taste for bee larvae, a special treat, but they use honey as a balm against coughs and sore throats. "They crush medicinal herbs into powders, then roll them into balls with the honey, like their pills. They also add honey when fermenting fruit and bark," says Kongwuth.

Taking only excess production that the village does not want, Kongwuth began by paying nearly double the going price. Two years ago, he designed an elaborate booklet to explain and encase the honey, marketed as Mathukorn, and sold the annual production of small bottles at four times the price he had paid through a single post on his restaurant's Facebook page. Like Phanuphon, who also sells some of the village surplus, he returns the proceeds to the village elders.

"I'm able to use the proceeds as a salary for them to monitor the forest, which lets them see the value in knowing the number of hives, the size and height, and the number of bees in a defined area," says Kongwuth, adding that he is saving to provide funding for a permanent 320-hectare sanctuary. Supervised by locals, the sanctuary will help the bees survive hotter temperatures by replenishing favorite plants and conserving water resources. 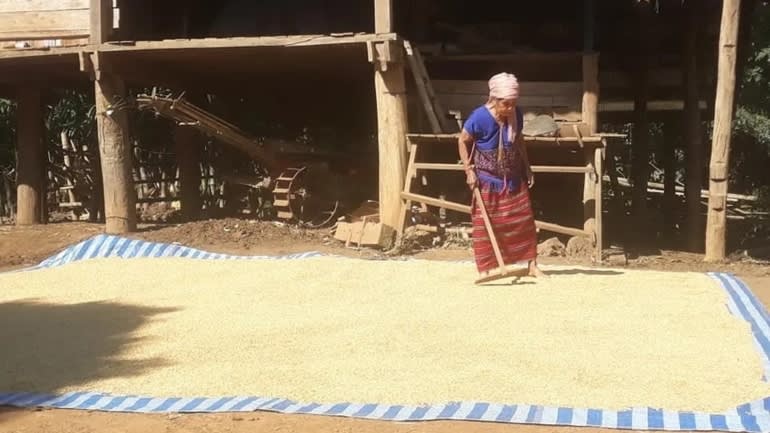 A scene of daily life in Hin Lad Nai. (Courtesy of Kongwuth Chaiwongkachon)

"We tend to think of indigenous people as being behind us. But we're the ones who are very behind," says Kongwuth. "When we Thais hear that manuka honey from New Zealand is good for us, everyone will run out and buy it. But we don't really appreciate the value of things they already have."

Kongwuth says he hopes he can spread his protection to other forests -- citing a recent French study calling bees "the most important creatures on earth," responsible for pollinating some 85% of plant-based human food sources. He is currently trying to enlist the support of the producer of Singha, one of Thailand's best-known beers, and other sponsors.

"Before I met the Karen, I used to look at bees as nuisances that can sting," says Kongwuth. "Now I think about the future, about my own newborn daughter, and I look at them as precious, irreplaceable resources."