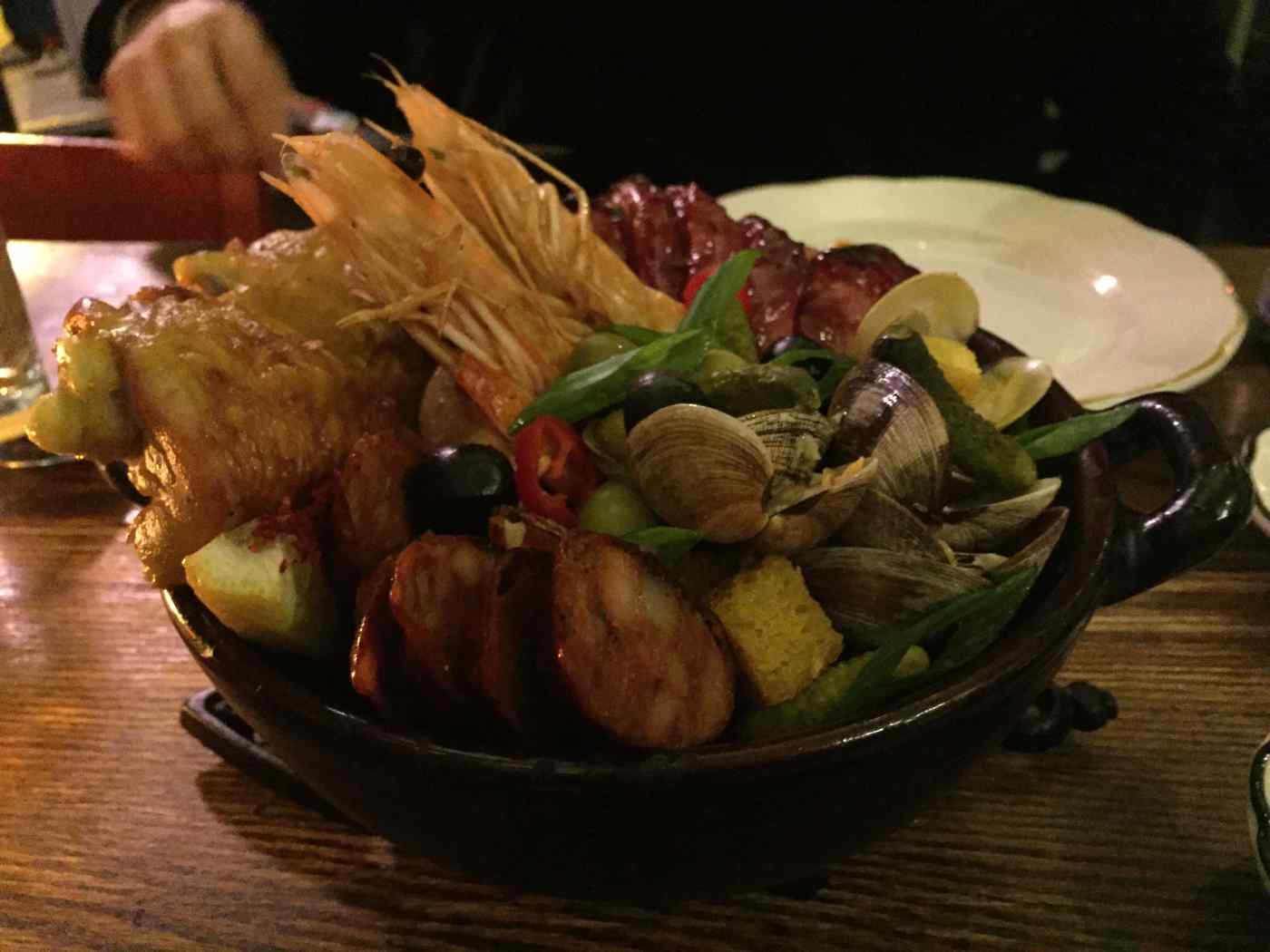 CHICAGO -- Three weeks before opening their first restaurant together in 2012, and after hosting more than 200 "pop-up" dinners, Adrienne Lo and Abe Conlon finally settled on a culinary theme for their new space: Macanese, in honor of the former Portuguese colony of Macau, in southern China. Nine months later, Bon Appetite magazine named it the fourth best new restaurant in the U.S. 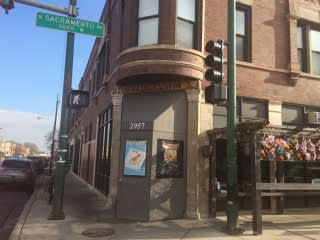 Located in Chicago's bustling Logan Square community, Fat Rice is one of the few restaurants in the city --and in the U.S. -- that specialize in authentic Macanese cuisine.

On a recent Friday night, there was a nearly two-hour wait to get into the eatery, which draws in diners despite featuring an unfamiliar cuisine in a neighborhood restaurant that does not even have a sign.

Munching sweet and sour eggplant while 1990s hip-hop looped in the background, Seibert waited on the dish after which the restaurant is named -- arroz gordo, or fat rice -- a traditional Macanese dish that includes Portuguese-style pork sausage, Chinese-style pork shoulder, chilli-stuffed prawns, tea eggs and more.

The quest to educate American diners about Fat Rice and the food of Macau began with Lo and Conlon lost in a land far from Chicago. 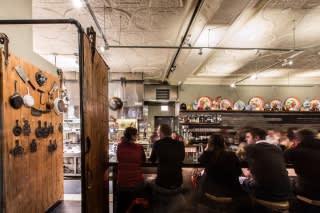 Fat Rice is decorated with Macanese tableware and cookware. (Courtesy of Galdones Photography)

It was March 2011 and they were visiting Macau for the first time, at the tail end of a trip that had seen them cooking in China's Sichuan province and munching egg tarts in Hong Kong. Lo's Chinese-American father suggested the Asia trip to the two foodies.

Through her family ties and travels Lo had been folding dumplings and cooking Indian curries her entire life. Conlon started as a fry cook at the age of 15, and later attended culinary school.

He had read about Macau before, and felt the place embodied everything he was. Growing up Portuguese-American in Lowell, Massachusetts, he was exposed to Southeast Asian cuisine at a young age thanks to the area's large population of Cambodian refugees. Lo always joked that if she and Conlon had a child it would be Macanese -- a mixture of her Chinese and his Portuguese roots.

They planned a 36-hour trip to the former colony, now a self-governing special administrative region of China. Once there, and after repeatedly circling the streets, Lo and Conlon finally stumbled on Riquexo Cafe. The community center was the one place, they had been told, where they would be certain to find the traditional food of the region.

"You have to go to the community center to get Macanese food because that's the generation of people still cooking that food -- the older generation; the younger generation are not. They're not interested in preserving their heritage and their culture," Lo said.

The two ate and were astounded by the dishes at Riquexo. The galinha bafassa (baked chicken with turmeric) and feijoada (pork knuckle and bean stew) were Eurasian combinations they had never tasted before.

But they were also amazed by how difficult it was to find real Macanese food in Macau, which was a Portuguese territory from the 15th century until 1999, when Portugal returned it to China. It has since been transformed into an international gambling destination larger than Las Vegas.

"Everybody hears Macau and they think casinos, they think it's this big gambling town," Lo said. "A lot of things change quickly, and things disappear quickly, but there everything is just being swept away."

Lo and Conlon were touched. A year later, the desire to preserve the cuisine of a place that many cannot pinpoint on a map drove the duo to dedicate a restaurant to the food of Macau. 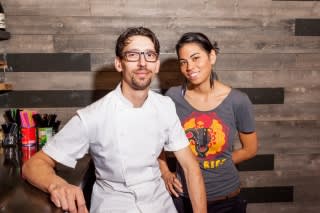 "It's this amazing fusion," Lo said of the food and restaurant. "It's kind of like who I am, it's who he is and it's the things we've cooked."

"They are really doing something that nobody else is doing in the world, even in Macau," said Mike Sula, an award-winning food writer based in Chicago.

Their desire to document these culinary traditions drove Lo and Conlon to release an extremely well-reviewed cookbook, "The Adventures of Fat Rice: Recipes From the Chicago Restaurant Inspired by Macau," co-written with Hugh Amano and illustrated by Sarah Becan. Amano is a former sous-chef at Fat Rice, who helped open the restaurant.

Part-cookbook, part-graphic novel and part-photo essay on Macau, Adventures of Fat Rice teaches home cooks how to replicate the duo's delectable arroz gordo through the larger cultural story of the decline of Macanese cuisine and culture.

When creating recipes for the cookbook, Lo and Conlon returned to Macau, Singapore, Malaysia and many other locales that have surviving Eurasian communities. Once there, they visited local libraries, bookstores and community centers, and tried to translate the family recipes they found into English.

"The way recipes were written you can't even decipher what the recipe is exactly because the amount of the ingredient is listed in how much the ingredient cost at the time. So it's like, 'Fifty cents of sugar,'" Lo said.

Lo and Conlon also cooked with Macanese families in their home kitchens. For the most part, Macanese cuisine is an oral tradition. Many of their recipes come from advice offered by Aida de Jesus, the 101-year-old chef who oversees Riquexo Cafe.

Lo describes the recipes they subsequently gathered as "real cooking" -- homey, hearty and a mish-mash of cultures. One pie merges fish and cheese. A dip is made of Chinese shrimp paste fermented in Portuguese brandy.

The two do their best to keep the food authentic, but are not bound by tradition. Many of their dishes merge Macanese classics with American grains.

"Fat Rice is a really loud place, it's a small restaurant, and kind of rambunctious and dark. The food is served family-style, and you sit at communal tables," Lo said. "It's unfamiliar, but when you sit down and eat it's immediately comforting."

The duo plans to keep cooking and evolving the flavors of Fat Rice. The establishment changes its menu about once a quarter, and Lo said customers should soon expect more flavors from Melaka, Malaysia -- another area that was once settled by the Portuguese. Eventually, customers can also expect another cookbook exploring global Portuguese cuisine, Lo said.

"When we went to Macau we saw how difficult it was to find Macanese food, and it was just kind of a shock to us, and sad to see that so much is just disappearing within a generation," Lo said. "[Fat Rice is] documentation, it's preservation."