Chinatowns in the US turn Instagrammable

SAN FRANCISCO -- When a family from Singapore passed the sleek glassed-in entrance to China Live in San Francisco's Chinatown, the building looked so different from the mom-and-pop shops dotted around the surrounding streets that they first thought it was an office complex.

"It's the nicest shop we've seen in Chinatown," said a university student named Shen, as his grandmother browsed the selection of $9 vinegars and $20 wok brushes.

The ambitious $20 million food emporium, which opened last March after three years of construction, could be seen as the Chinese answer to Eataly, the Italian food marketplace with stores around the globe.

Like Eataly, which brings Italian dining and retail shops together under one roof, China Live's 2,800 sq. meter space includes casual and fine dining restaurants and a culinary shop. There is a rooftop lounge, a tea cafe and a bar called Cold Drinks, which founder George Chen happily describes as "my vision of an old Shanghai bar with 'Blade Runner' and James Bond mixed in."

The fine dining restaurant, Eight Tables, won the "Most Beautiful Restaurant of the Year" title in December from the food news site, Eater. 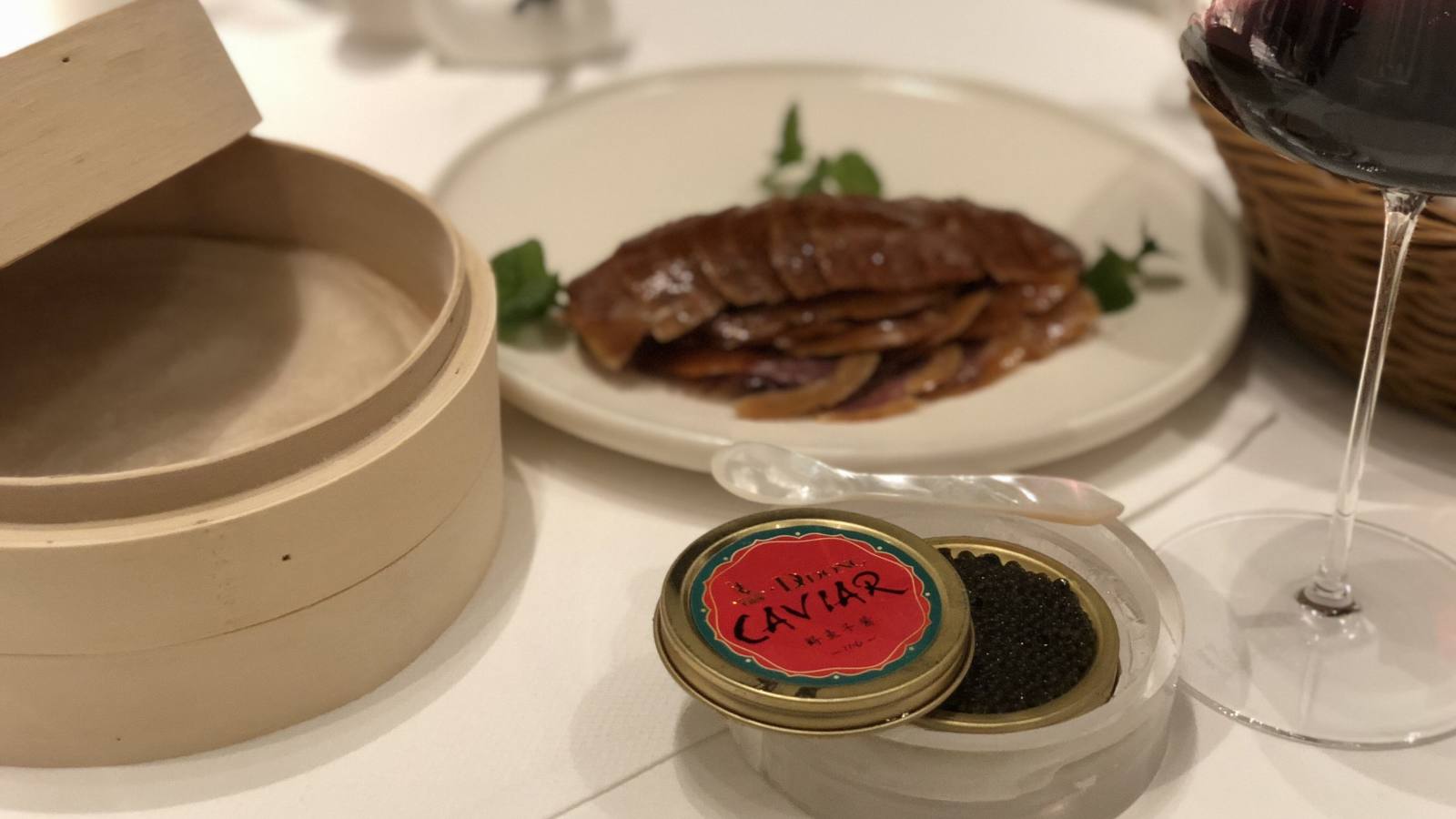 "I saw Eataly and the huge success that [it] was," said Chen, who previously opened 15 restaurants in San Francisco and Shanghai and also runs a restaurant tech platform and wine distribution business. "I thought: They did a great job there. If they can do it with Italian, why can't we do it with Chinese?"

Chen oversees all operations at China Live. His goal goes beyond luxury shopping and dining: He also wants to educate customers about Chinese culture. About half the visitors are not Asian, and many are those who "generally don't go to Chinatown," he said.

"In the past decades, Chinese food hasn't evolved as much as I'd like to see in this country," Chen said. "Given the prosperity and wealth and influence of China, I thought that we should educate and demystify Chinese food."

China Live is tapping into a huge trend. A more upscale version of the food court that typically features a mix of artisanal vendors and restaurants, the food hall is proliferating across the U.S., as well as abroad. Last year, there were 115 operating food halls in the U.S. By 2020, there will be 300, estimates Garrick Brown, head of retail research in the Americas for commercial real-estate firm Cushman & Wakefield.

"There's been explosive growth," Brown said. "They're becoming building amenities. Office developers plug in a food hall concept and they find it easier to lease the space upstairs." 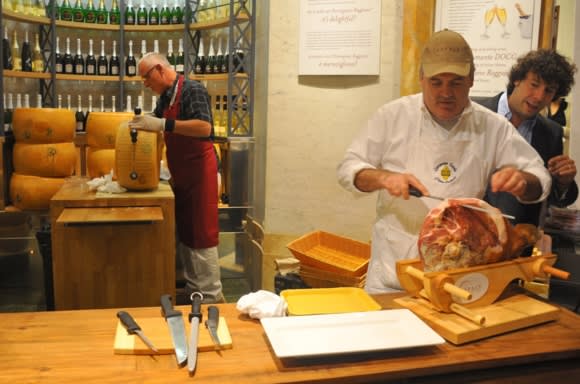 An Eataly shop in New York

Shopping in China Live's marketplace is vastly different from browsing the neighborhood shops, where inexpensive grocery items are tossed randomly into bins. Jars of spices and sauces are meticulously curated in neat rows, and small placards explain the more obscure ingredients at length. Camellia mushroom paste is described as "similar to a mushroom tapenade," and home cooks are encouraged to use the paste on top of rice, pasta or Brie cheese.

Customers get a similar educational experience at Market Restaurant, another eatery at China Live, which is divided into four cooking stations dedicated to different categories, such as dim sum and barbecue, allowing diners to watch the cooking process.

"It's not just about eating anymore," Chen said. "People want an Instagrammable moment in dining." Customers line up to buy lunch at the Canal Street Market food hall in New York. (Photo by Elisabeth Rosen)

Instagram moments were also on the mind of Philip Chong, a real-estate developer who founded New York's Canal Street Market in 2016. As other retailers struggled, Chong saw an opportunity.

"People were saying there was a retail apocalypse, and my company owned one of the largest retail spaces on Canal Street," he said. "It was daunting, but I saw a great opportunity for a shared retail space."

The market he created in the heart of New York's Chinatown is divided into two sections, a retail shop and a food hall. Chong said the space is shared by more than 40 "carefully curated" vendors, which, unlike the areas of China Live, are individually operated.

These shops reflect both the old and new faces of the neighborhood: Nom Wah, one of the oldest dim sum restaurants in Chinatown, has a stall next to local upstart Davey's Ice Cream. The retail side of the market opened in December 2016, while the food hall opened last May.

"You can learn about bonsai while eating dumplings or ramen," Chong said. "You can tap into all these different stores within 10 steps."

Chong said the market is a boon not only for customers, but also for business owners who might not be able to afford their own stand-alone stores. At Canal Street Market, he said the vendors can "leverage the efficiencies of a shared economy, while also getting the benefits of built-in marketing." George Chen, the founder of China Live in San Francisco, said he wants to educate customers about Chinese culture. (Photo by Elisabeth Rosen)

The story of one such business owner, Leo Lei, typifies Canal Street Market's vision of the new Chinatown. His parents once ran a jewelry stall across Canal Street. Lei now runs his own stall, Leibal, on the retail side of the market.

Leibal began as a minimalist design blog, then evolved into an online store after readers kept asking where they could buy the products featured on his website. In 2016, when Canal Street Market opened, Leibal established a physical presence.

Leibal's intricately designed household items, like a $69 humidifier and $229 scissors, have little in common with the inexpensive products traditionally sold along this stretch of Canal Street.

"There are a lot of expectations for a business in Chinatown," Chong said. "Everything needs to be dirt cheap -- Canal Street is known for fake bags -- so to shake loose of those preconceived notions has been a challenge."

But Chong said foot traffic is increasing every month. And Lei's experience suggests that customers do not mind spending more for higher quality products.

"The biggest challenge is making sure you have enough inventory, especially during the holidays," Lei said. During the 2016 holiday season, "we sold through everything 15 days in."

The interest in food halls in the U.S. comes not only from developers and landlords, who welcome new streams of revenue as brick-and-mortar retail becomes increasingly untenable, but also from restaurateurs. Soaring operational costs and rents have led to a high closure rate for stand-alone restaurants, making opening a stall in a food hall an attractive proposition. Leases tend to be shorter, and the design and construction costs are much lower than with a stand-alone establishment.

As food halls become increasingly popular across the country, many entrepreneurs like Chen and Chong are seizing on the format to highlight Asian cuisine. Philadelphia has Chinatown Square, a food hall opened by two local restaurateurs last March that projects a casual food-truck vibe.

Celebrity chef Anthony Bourdain announced his intention to open a food hall dedicated to authentic Asian street food, although his plans for a massive 14,000 sq. meter project in New York were canceled in December. The site was "especially complicated," Bourdain said in a statement. Multiple challenges arose, from securing a lease for the site to getting visas for vendors.

Outside the U.S., London has Bang Bang Oriental, owned by the Royal China Group, which opened last summer and labels itself as "London's new capital of Asian cuisine."

Back in the U.S., Brown of Cushman & Wakefield attributes China Live's "wild success" to the fact that it does not resemble a typical food hall. Like Eataly, China Live has a unified vision with one person presiding over the whole operation, in contrast to the typical frenetic array of vendors. "It doesn't fit the mold," he said.

The format has drawn enough visitors to make China Live profitable. The business currently brings in over $1 million per month in sales, Chen said, and he projects that it will surpass $20 million for the full year. Once operations are solidified, he hopes to expand to New York and potentially other locations in the U.S.

However, he remains cautious about expanding too aggressively. Brown echoed that concern, as too many locations could diminish the brand's appeal.

"Every major mall landlord would love to have an Eataly," Brown said. "But part of Eataly's charm is that you don't find it everywhere. If there was an Eataly in every city, its uniqueness would be diminished."