Chinese breakfasts are almost beyond the imagination 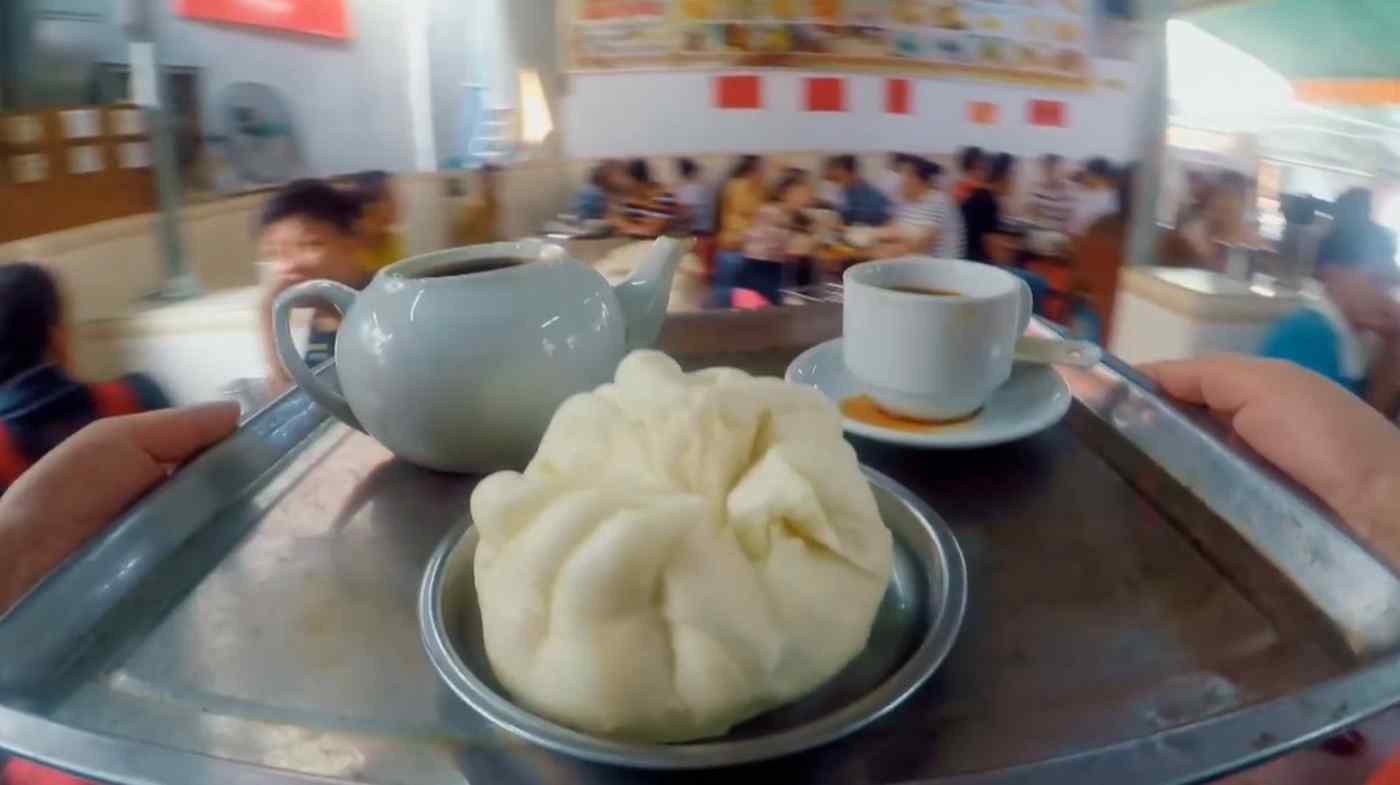 Breakfast is served! On China's Hainan Island, starting the day with a steamed bun and a cup of laobacha, or "old man's tea," is a ritual for many locals. (Screen grab from YouTube)
LIN WANG, Contributing writerJuly 26, 2021 08:00 JST | China
CopyCopied

NINGBO -- From roasted lamb "baozi" in the west, to clay pot seafood noodles in the east, the diversity of Chinese breakfasts is beyond the imagination of many. What better way, then, for those curious enough to learn more about China and its food culture than to join local people for breakfast at their favorite stall.

The Sichuanese start their morning hot, with spicy wontons in chili oil. The mix of minced pork, peppers and soup makes it very addictive. Once one scoops a wonton into his mouth, he will never put down the spoon. Surrounded by mountains, Sichuan is a basin which gathers rain and mist. While locals enjoy their moisturized skin, they also eat spicy food to get rid of the humidity and stay warm.

With a flip of the tables, Sichuanese wonton stalls often transform into Mahjong heavens in the afternoon. That's double pleasures in one place. On hot summer days, Sichuanese even move their Mahjong tables in the streams. Dip their feet in the cool waters while playing their favorite game leisurely.

But in Guizhou, people have a sour taste bud. From shrimp sour to vegetable and fruit sour, Guizhounese have invented 128 kinds of sour flavours. In the past, it was challenging to transport salt through the mountains to reach Guizhou in southwest China. Hence locals chose to eat something sour to make up for the lack of salt. Moreover, the sour taste improves appetite and facilitates digestion.

The white and red sour soups are two classics. While the white is fermented from rice soup, the red is made from wild tomatoes, mountain peppers and Chinese baiju. When the fish raised organically in rice paddy fields is cooked in the red sour soup, it tastes so good that a person would finish three bowls of rice. 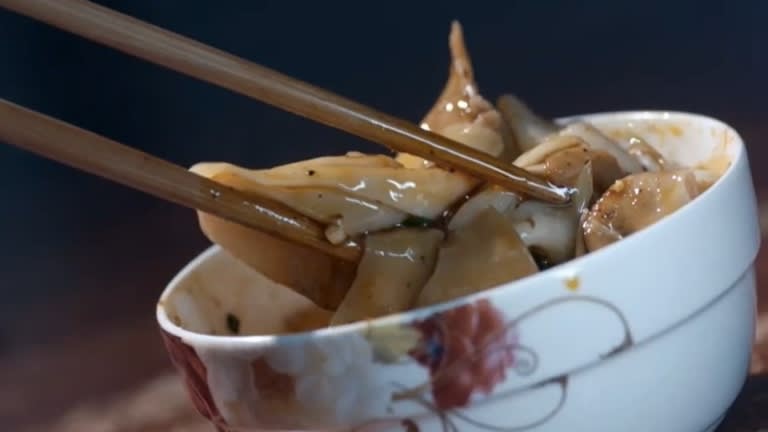 In Sichuan Province, tucking in to a bowl of spicy wontons after waking up is a popular way to start the day. (Screen grab from YouTube)

In the morning, Guizhounese like to DIY siwawa. Si means slices and there are so many to choose, such as shredded lettuce, seaweed, radish, bean sprouts, crisp meat and a strong-flavoured herb nicknamed as "fish mint". Wawa means a wrapped baby. One can take a rice flour pancake and wrap some favorite slices. That is a colorful siwawa.

Pour some red sour soup into siwawa and put it into the mouth. The unique mix of spicy, sour and crisp flavours would "explode" like fireworks and result in a refreshing feeling. Wrapping siwawa together in a street stall also brings people closer and creates a homely atmosphere.

In eastern China, people prefer the salty flavour from the sea. In Ningbo, a coastal city next to the East China Sea, people like to pickle mud snails and crabs with salt and Chinese yellow wine. Some warm porridge, picked "tipsy" seafood and crisp radish make up a simple yet tasty breakfast. 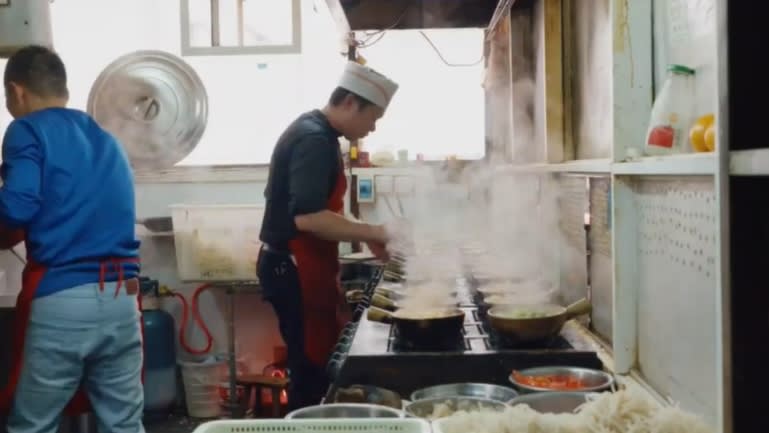 In the southwestern province of Guizhou, sour flavors are popular, and "red sour soup" is no exception. (Screen grab from YouTube)

A controversial local favorite is "stinky" wax gourd. Cut the wax gourd in chunks, cook them first and then let them cool down. Put these chunks inside an earthen jaw, add some salt and "stinky" soup from pickled amaranth stem, close the jaw with stones and store it in the shade for a few weeks.

This unusual flavour was accidentally discovered by fishermen in the old days. Since wax gourd is very affordable and easy to store, it was the fishermen's choice in their weeks long trip. Then they found out that the seemingly smelly wax gourd is surprisingly tasty.

The wax gourd with a few drops of sesame oil is a guilty pleasure in summer. While its smell is a bit unusual for outsiders, Ningbonese find it distinctively fragrant. On hot summer days, wax gourd tastes particularly refreshing. As a natural Chinese medicine, it also clears the stomach, relieves thirst and soothes the mood in summer.

In the suburbs of Shanghai, people cope with summer through a very different tradition. As early as 4:30am, locals queue outside eateries that serve fresh lamb and chilled beer for breakfast. Sit out under the early morning sun and savor fresh lamb with a beer to cool off. Is there a more appealing way to start the day? 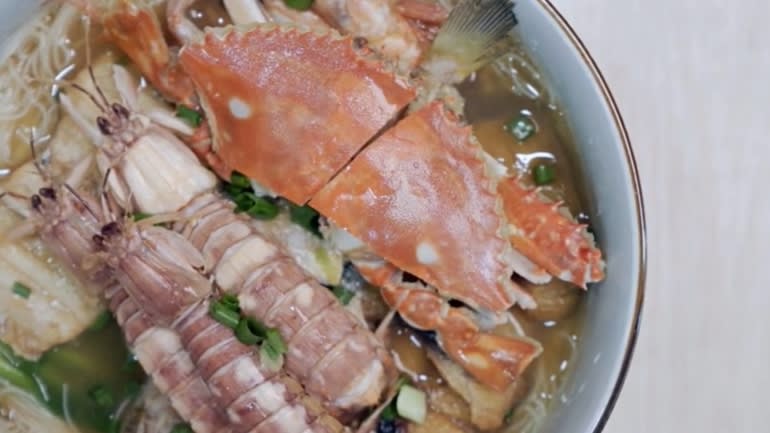 In eastern China, proximity to the ocean has made seafood noodles a natural choice for a morning repast. (Screen grab from YouTube)

This custom can be traced back to the Yuan dynasty, when some Mongols migrated to this area and started raising lamb. There is also a belief of "curing winter diseases in summer" - consuming "warm-natured food" such as lamb in summer will get the body stronger for colder months. Even in summer when people have cold drinks and expose themselves to air-conditioners for a long time, the warm lamb brings a balance to the body.

On 10 July, a summer lamb festival would take place in Zhangze town in the outskirt of Shanghai. Slowly cooked over wood fire, the fresh Zhangze lamb is so tender that it would melt gently inside the mouth. With just garlic sprouts and hardly any seasoning, the lamb soup is simply delicious. And don't forget to drink some liquor.

In Hainan island, morning flows in laobacha, or "old dad's tea." Locals shuffle up to their neighbors in the street, asking "Go have tea?" With tacit understanding, they gather at their usual place to sip tea and enjoy savory snacks while chatting their morning away. Since most regulars are older men with plenty of free time, this morning routine gained its name old dad's tea. 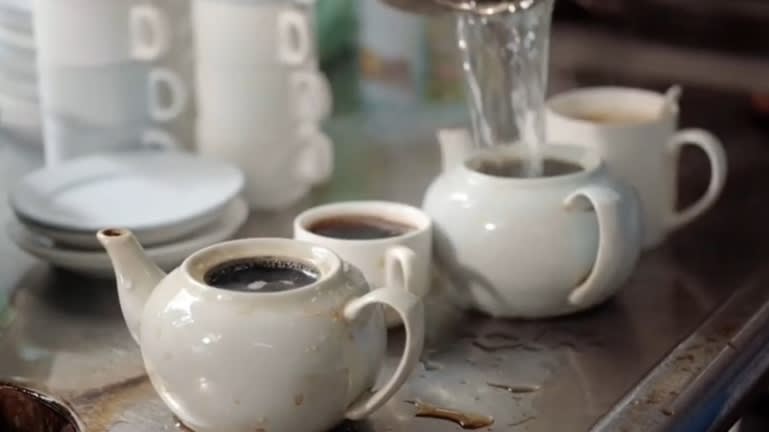 The cups on Hainan Island runneth over with laobacha. (Screen grab from YouTube)

There are common teas such as green tea, Pu'er and Tieguanyin, and local Hainan teas such as iced lemon black tea and kumquat green tea. They "eat" tea, as there are so many foods to choose from, including shrimp dumplings, bamboo sticky rice and "Hainanese tom yum", a spicy and sour soup with Hainanese noodles, beef stew, conch, seaweed and a plant known as "sea vegetables". An old dad's tea house is very accommodating, as the tea is always refilled by bustling servers and prices rarely rise above the single digit.

What's more, it is free and unrestrained. Whether someone shows up in sleeveless vests and open-toed sandals or sips the tea quietly from morning to noon, no one would interfere. It is a laugh at formality and a rebel from the rushing society.

In Chinese mega cities, breakfast is becoming a luxury. As millions of Chinese rush to work in the morning, they often skip breakfast or grab something from convenient stores. Perhaps it is time to learn from those old dads in Hainan and take time to enjoy breakfast. After all, breakfast takes our stomach home.