TOKYO -- Tea lovers in Japan are relishing yet another popular beverage from China and Taiwan, this time black or jasmine tea containing chunks of fresh fruit.

Coming on the heels of the tapioca milk tea craze which is still in full swing, new shops specializing in fruit teas are springing up in Tokyo, Osaka and other areas.

The second outlet for Yucha, a shop specializing in fruit tea, opened in April in Tokyo's popular entertainment and shopping district of Ikebukuro. This followed the debut of Yucha's flagship store last September in Takadanobaba, a favorite student hangout in the capital.

Yucha's hook is the seasonality of its beverages. This spring, for example, the shop featured a kumquat-flavored tea. In summer it will be watermelon.

The shop's additive-free tea uses only hand-squeezed fruit, with each serving made individually upon order.

Yucha is operated by Tendo, a company based in neighboring Saitama Prefecture. Tendo President Han Yafei said he learned how to make the teas by "visiting stores in China, the home of fruit tea." The president carefully selects Taiwanese-made tea leaves that are particularly well-suited for fruit tea.

Testament to Yucha's popularity were the long lines of customers that could be seen on a weekend earlier in May. A favorite request was for Super Fruit Tea -- a zesty blend with at least five kinds of fruit such as orange, kiwi and lime. A medium-sized cup was selling for 580 yen (about $5.30). 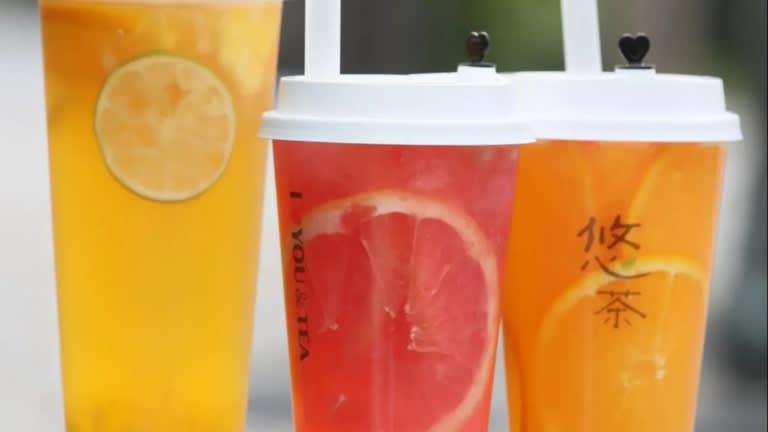 Also in Takadanobaba is Te a Mo, which opened in February. Patrons can custom order fruit teas with toppings like tapioca and cheese, and adjust the sweetness. Because of the lack of tea varieties in Japan compared with China and Taiwan, manager Shang Di wants to experiment with other ingredients for the tea base such as roses.

Another shop serving natural fruit tea is Fruits & in Osaka. "I don't feel guilty drinking their teas because they aren't very sweet, said 23-year-old Akane Okahisa, who was interviewed at the shop with her friends earlier in May.

Okahisa had ordered Gold Pine Oolong Tea, a blend of pineapple smoothie and oolong tea priced at 650 yen. It was the first time that Okahisa had ever sampled fruit tea. Her friend Yurie Moriyama, 24, also liked the cool beverage. "When the hot weather sets in, I'll probably be drinking more," she said.

The owner of Fruits &, Chinese-born Chi Chengyu, wants Japanese to rediscover fruit through tea. While studying in Japan for about six years, Chi said he "was surprised to find that Japanese do not eat a lot of fruit."

After his studies, Chi spent about a year developing a selection of fruit teas based on the ones that had been become popular in Taiwan and China.

Owing to fruit tea's relatively new arrival in Japan, Fruits & sells at most 200 cups a day, relying on its tapioca drinks for about 70% of sales. Chi wants fruit tea to eventually account for about half of sales by introducing new flavors.

Not wanting to miss out on the trend, Japan's ubiquitous Lawson convenience stores started another fruit tea campaign at about 14,000 stores nationwide from April. The chain's Lipton Fruits in Tea will be available for a limited time and sell for 350 yen a cup -- rather pricey for a convenience store drink.

The beverage is made from iced Earl Grey Tea containing chunks of lemon, strawberry and pineapple. When Lawson first introduced the drink last summer, the campaign finished its planned run of 400,000 units in just two days, prompting two more campaigns during the summer months.

Part of the tea's appeal lies in its color and --- of course -- social media. Compared with tapioca milk tea, which looks comparatively bland, fruit tea "is colorful and looks good on Instagram" as it contains large pieces of fruit, said a 19-year-old female university student.

According to Hideomi Yamada, Lawson's senior merchandiser, many women buy fruit tea "as a special treat for themselves."