Circus shows temple tourists another side of Cambodia 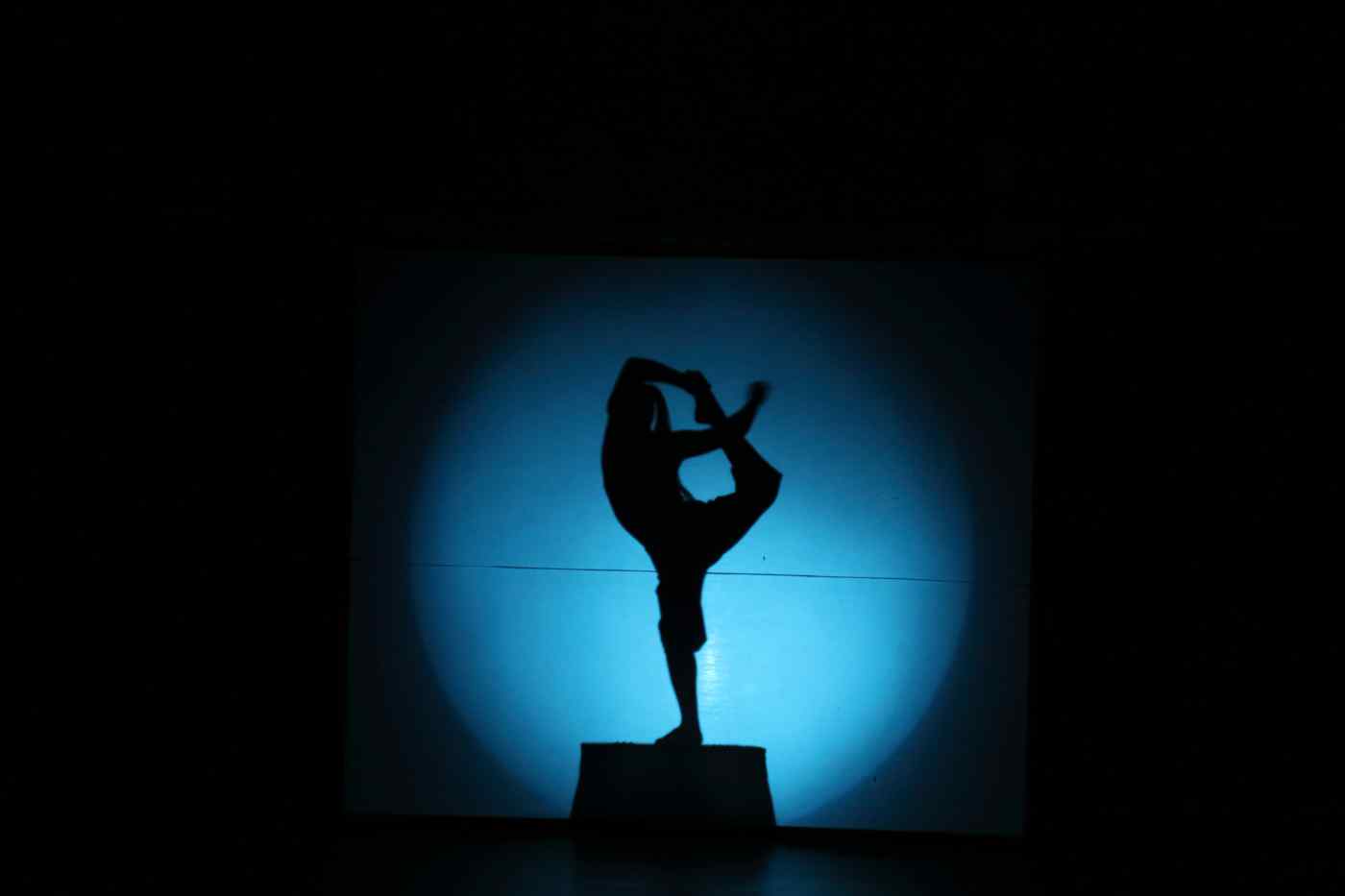 SIEM REAP, Cambodia -- It is a stiflingly hot Friday evening in Siem Reap, western Cambodia. The big top is packed, and there is an air of excitement as 300 or so spectators squeeze onto narrow wooden benches. Backstage, the artists are getting ready.

The lights dim, and the audience falls silent. Traditional Khmer music emanates from the darkness. A blue light appears above the performance area as 12 actors kneel in a circle, ready to launch into "Eclipse," a highly physical and beautifully performed reflection on Cambodian village life, rejection and the gods. Seconds later, bodies glide and fly through the air in gravity-defying stunts that are a mixture of spectacle and narrative. The audience takes in a Phare Circus show in Battambang. (Photo by Tom Vater)

As Cambodia continues to wrestle with its tragic history and current dysfunctional governance -- mass bombing by the U.S. in the 1960s, the Khmer Rouge communist revolution and genocide in the 1970s, civil war in the 1980s and 1990s and subsequent political dominance by authoritarian Prime Minister Hun Sen -- foreign acclaim for the impoverished Southeast Asian kingdom has been rare.

The internationally renowned Phare circus in Siem Reap is an exception. Apart from the famed ruins of Angkor, capital of the ninth to 15th century Khmer empire, it has been the town's main attraction since it opened in 2013.

Tonight's performance started life as a student project in Phare Ponleu Selpak, a school run by a nongovernmental organization that offers circus training and other creative courses in Battambang, a bucolic town about 100km south of Siem Reap. Phare Ponleu Selpak provides most of the artists who work at Phare Circus. 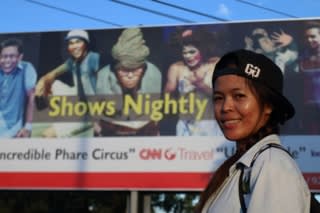 Kanha Choub, 21, one of two women who appear on stage, entered the Battambang school when she was 9 years old.

"My brother was a musician in Phare," Choub said. "He told my parents that it would be good for me to join the circus school because I liked to jump and I was comfortable playing with boys. And most importantly, the school was free. My father agreed, but my mother was worried that I would injure myself and not be able to have children."

Choub graduated in 2014 and is now her family's main breadwinner, earning the equivalent of $27 per show. She tours in several productions around the world, and has worked in France, the U.S., Bangladesh and Rwanda, where she performed for thousands of Congolese refugees as part of an initiative by Global Arts Corps, a U.S.-based non-profit organization that stages original theater productions in post-conflict societies.

"I didn't choose to pursue a circus career for fun or money. I want to convey my feelings to the audience," said Choub. "Shows like Soka, the story of the group of artists who survived the Khmer Rouge and founded the Phare School in 1994, are emotionally demanding." 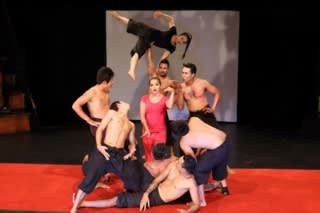 Choub, in black at the back, performs in the Phare big top in Siem Reap. (Photo by Tom Vater)

Choub also learnt to emancipate herself. During the shows, she is in constant physical contact with her fellow actors, most of them men -- a social taboo in Cambodia. Women's identities in Cambodian society remain largely codified. "Chbab Srey," a poem taught in schools until a decade ago, serves as a code of conduct, reminding women that staying at home with their families should be the norm.

Choub said that when she began to perform as a student in the school's big top in Battambang, she was heckled by the audience.

"People were surprised and shouted, 'Why is this girl on stage?' I was very embarrassed. Now I don't care anymore if the audience is rude. I am more self-confident."

Craig Dodge, director of sales and marketing for Phare Circus, said performers face many challenges. "Cambodia is still in survival mode; a lot of children think that they will pick rice, clean hotel rooms, collect plastic bottles from the trash, sell tickets or drive tuk-tuks all their lives. Children don't 'dream' of jobs in Cambodia. At Phare, they learn that they can do anything if they work hard and if there is opportunity." For the last 15 years, the small town of Siem Reap has been the launch pad from which tourists visit the Angkor ruins. "We established the big top in Siem Reap because it's the country's top tourist town," said Dodge. "Circus is fun and marketable. It creates jobs for the kids after they finish their studies at Phare Ponleu Selpak. Creativity can actually get you out of poverty."

In high season, from mid-October to end of March, most shows are sold out. "Tourists stay two or three nights in town, go to see the temples, enjoy an Apsara dinner and have a massage or hang out in bars on Pub Street. We try to break this pattern and make the circus show a must-see," said Dodge. Apsara is a traditional dance performed by women.

In 2015, Phare was ranked the town's third best attraction on Trip Advisor, after the historic Bayon and Ta Prohm temples. "We are the model of a successful social business in Cambodia," said Dodge. "But we are fragile and need to collaborate with other structures to attract big donors that can assure our future. We don't receive any governmental support." 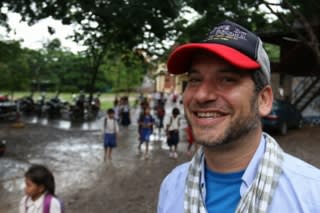 American filmmaker Joel Gershon wanted to show Cambodia "for something other than poverty, the Khmer Rouge and Angkor Wat." (Photo by Tom Vater)

In 2011, Joel Gershon, an American lecturer in journalism at Thammasat University in Bangkok, fled monsoon floods in Thailand and travelled to Cambodia. "As a kid, I always wanted to run away and join the circus," he said. "When I visited Phare in Battambang, I immediately had the feeling that what they were doing made a difference."

Gershon set out to shoot a documentary about the circus when he heard that two of its best artists, Dina Sok and Sopha Nem, both trained in Battambang, had left to join the Ecole Nationale de Cirque (National Circus School) in Montreal. When Gershon returned to New York a few months later to visit family, he decided to drive to Canada to meet them. "I found two true entertainers who love the camera. And the camera loves them. The first time I met them we really connected."

Gershon said he decided to follow Sok and Nem. "I want to tell an underdog story about two kids who come from nothing to become the first Cambodian circus artists on an international stage. I want to put Cambodia on the world map for something other than poverty, the Khmer Rouge and Angkor Wat [a temple complex at Angkor]. Or at the very least, I want to talk about these subjects in a different way." 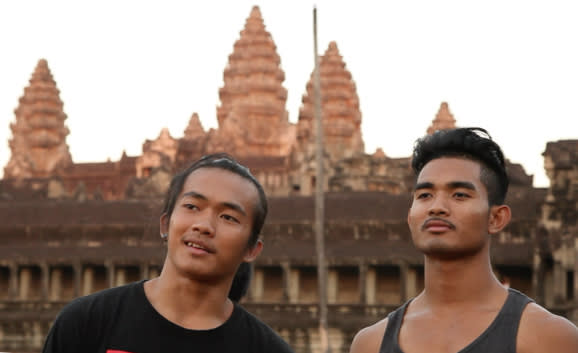 In 2016, Gershon raised $10,000 through a crowdfunding campaign and produced a trailer for "Cirque du Cambodia" with Living Films in Chiang Mai, Thailand. His documentary is intended to depict the spirit of contemporary Cambodia.

No one feels this more acutely than Sok, 22, who is the first and only Cambodian national to join the Cirque du Soleil, a Canadian entertainment company that claims to be the largest theater producer in the world. Sok and Nem entered the Montreal circus school in 2011. Both graduated last year. Nem has since found work with a cruise ship company in Germany.

"I am very proud," said Sok. "It's so difficult to enter the Cirque du Soleil. When I was still in Cambodia, I watched their videos and I was really impressed. I wanted to be part of that so badly. It's hard, it's a lot of precision work, a lot of training, but I like it. When things are perfect, one can go anywhere."

Sok has mastered six disciplines -- beatboxing, clowning, juggling, the tight rope, the slack line and Chinese hoops -- and loves hip hop. But he has not forgotten his roots. "I'd probably be working on a construction site if I had not had the opportunity to join Phare," he said.

"I started the circus training because I wanted to go to France. My brother had traveled there as part of his circus training, and each time he went he brought me candies and showed me pictures of snow. One time, he didn't bring me anything and said: 'Become a circus artist and you will be able to buy candies in France yourself.'" 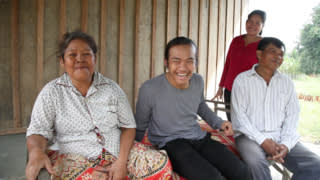 Dina Sok, second from left, at home in Battambang with family (Photo by Joel Gershon)

For Sok, success has been two-fold. "My father earns $5 a day as a motorcycle taxi driver, so I still help my parents and my siblings. It's hard to find decent work in Cambodia. When I go out in Montreal or talk to the audience after our shows, some of them tell me that they have seen the show in Siem Reap. It gives me a real thrill that they enjoyed seeing my friends back home perform."

Sok sees Gershon's film as part of his conversation about his country. "I want to explain who I am, what I do. I want to tell them about my hardships. Perhaps the movie will entice more young people to join the circus."

Sok is about to set off on an Asian tour that will take him to Japan, China and Taiwan. He hopes to see his family as well, for the first time in two years. "We must dream a lot, as big as we can," he said. "People in Cambodia have dreams, but they are difficult to realize because opportunities are so scarce."

Gershon has finished the principal photography for his film and is returning to the U.S. to seek further funding in order to complete the editing and assure promotion and distribution: "Twenty years after the end of the [Cambodian civil] war, the country is re-emerging," he said. "I want to show how this new generation is coming of age."