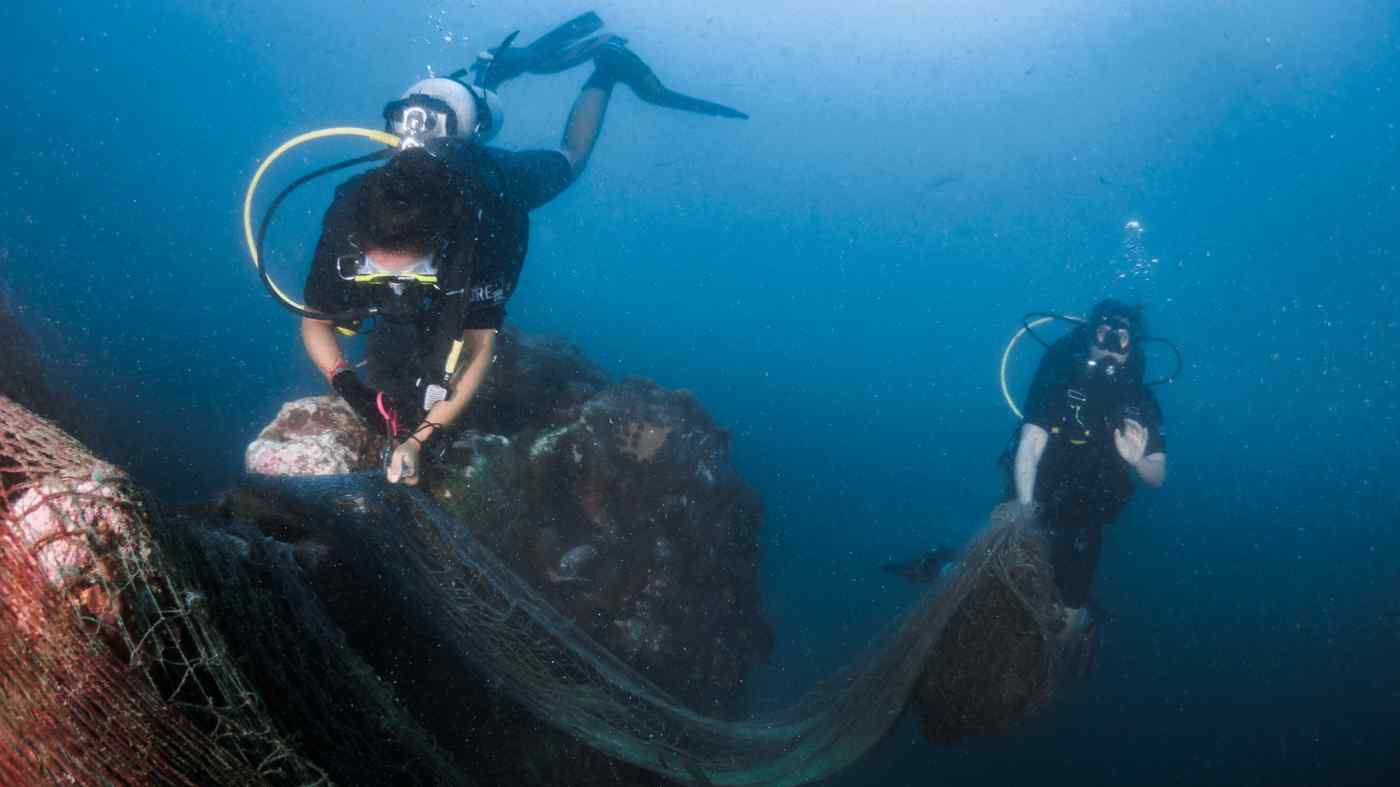 KOH PHANGAN, Thailand -- It is 9 a.m. on a sultry Sunday morning off the coast of Koh Phangan, a popular tourist island in the Gulf of Thailand. More than 30 divers are getting ready to plunge into the tropical waters -- not to marvel at the underwater world but to spend the day removing kilometers of abandoned fishing nets that lie on the ocean floor, snagged on rocks and coral and suffocating marine life.

These weekly diving trips are organized by Sitthiroj Kaenongsamed, a local diver and environmental activist. "The first time just three of us retrieved 700 kg of nets," says Sitthiroj. "We realized that there are a lot of nets down there and we keep finding new ones."

The activists now work with volunteer dive professionals and the Center for Oceanic Research and Education, a local nongovernmental organization known as COREsea. Local businesses donate food and water, and Thailand's Department of Marine Coastal Research provides gasoline for the boats and air refills for the divers' tanks.

Dive boat operators and divers have time to help clean up the coast because tourism in Thailand's Gulf islands has largely disappeared as a result of the COVID-19 pandemic. Last year, the neighboring islands of Koh Phangan, Koh Samui and Koh Tao welcomed more than 3 million visitors. Since April, the tourists have gone and the region's ecosystem has been breathing a sigh of relief. But long-term plans are needed to tackle environmental pollution and the eventual return of large numbers of visitors to the islands.

Since tourism dried up, reports of encounters with wild or rare animals have been frequent. Elephants have emerged from the jungle, while sharks, otters and herds of dugong -- not seen locally for decades -- have made bold appearances on the seashore. Rare leatherback turtles have laid eggs for the first time in years on several beaches on Koh Samui. Off Koh Phangan, local fishermen filmed pink dolphins around their boat. Local diver and activist Sitthiroj Kaenongsamed organizes regular dive trips to free the coral reefs of Koh Phangan of miles of snagged nets. “We can’t just dive and enjoy the nature," he says. "We have to do something for the marine wildlife’s future.” (Photo by Tom Vater)

Even before the pandemic Thailand's government had started taking modest steps to protect marine biodiversity hotspots. Maya Bay, in the Phi Phi islands, was closed two years ago and is not expected to reopen until 2021. In June, the Ministry of National Resources and Environment announced that all the country's national parks would be closed for two months a year to give nature some time to recover.

However, Stefan Follows of COREsea says wildlife sightings are not a sign of environmental recovery. "To be clear, nature is not coming back, it is coming out of hiding. Monkeys, turtles and dolphins have become more visible because there are less people, life and noise pollution."

According to Follows, the main environmental issues plaguing the Gulf islands are their mountains of trash and a lack of fresh water after years of uncontrolled development. "While some glass and plastic is recycled, the rest goes into landfills, on the islands or on the mainland in Surat Thani Province. While it's good to get the garbage off the islands, this causes yet another footprint."

Jintamard Sinlapaprommard, who works for both the regional environmental office and Eco Thailand, another NGO, agrees that solid waste garbage remains a challenge. "People collect plastic on the islands, but there's no money to separate this waste because prices for recycling have collapsed," she says. "As a result, much of it is currently burned." 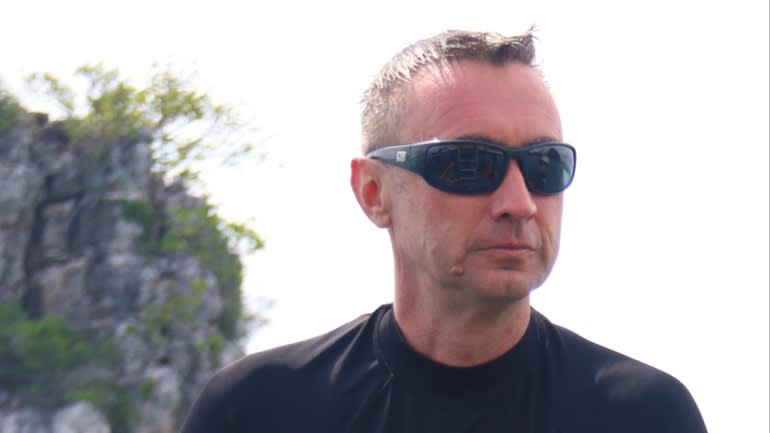 Stefan Follows of the Center for Oceanic Research and Education, or COREsea, on Koh Phangan.(Photo by Tom Vater)

Water is an even more pressing issue, says Follows. "Koh Tao no longer has fresh water and brings in a couple of boat loads a week from Koh Phangan, which suffers sinking groundwater levels but remains self-sufficient. Koh Samui now has a pipeline from the mainland. No one is collecting rainwater."

Follows suggests charging visitors directly for their water consumption, "Tourists don't realize that water is a finite resource. To help people understand to be mindful of the amount they use you need to charge them. This can be done by installing water meters in tourist accommodation."

Sinlapaprommard details the modest official regulations: "We monitor water quality and advise local authorities; we check how hotels with more than 60 rooms process their wastewater, and warn them if their systems are not adequate. Some properties on Koh Samui and in Surat Thani have been fined. But we don't see much investment from smaller hotels beyond septic tanks." 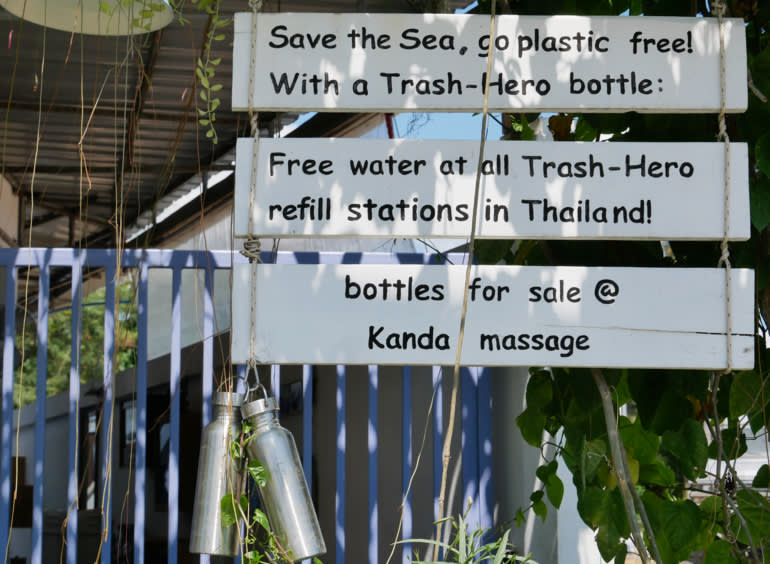 Both agree that too much tourism is not sustainable. "When the COVID-19 crisis winds down, tourism authorities should push for quality rather than quantity. The country could benefit from fewer visitors," says Follows.

Sinlapaprommard says there are already too many hotels on the islands. "On Koh Samui there's no more room for anything other than resorts," she says. "And yet local people clear more land to build more and make more money. So conservation is difficult."

Koh Tao faces similar overcrowding issues. Kirsty Magson is a marine biologist and has been the conservation instructor at New Heaven Dive School on the island since 2015. New Heaven offers a plethora of conservation courses as well as internships for budding marine conservationists. It is also engaged in hands-on cleanup projects, and contributes data to CoralWatch, a not-for-profit citizen science program based at Australia's University of Queensland that carries out long-term monitoring of reef topography and biodiversity. A garbage-strewn beach on Koh Phangan’s west coast. With many resorts closed and staff made redundant, some beaches on Koh Samui, Koh Phangan and Koh Tao are covered in plastic debris, mostly dropped by fishing boats. (Photo by Laure Siegel)

"There are 58 dive schools on Koh Tao," says Magson. "On an island of 21 sq. km they have a substantial impact on the environment. Day trips from other islands add even more divers and don't follow the same regulations as shops based on Koh Tao. We don't know how to reduce the number of dive shops; that has to be regulated by the government."

Magson says there are too many divers even though visitor numbers declined from 500,000 in 2018 to 350,000 last year. "Since 2015 coral abundance and diversity has decreased in some places while there's life and recovery in other areas. It's a mixed bag. There have been talks about the closure of beaches, but Koh Tao is not a marine park where this can be enforced. For sure, we would like to stop people from diving in certain places, but then they would just move to other spots if the entire area is not protected."

COVID-19 has stopped the dive industry in its tracks, but the challenges of the island's boom remain. "Even now, there is construction going on," says Magson. "Erosion, building work, weather patterns, wave influence and sedimentation have clearly had an impact on visibility, which has been bad for extended periods." Divers pick through nets they have brought up from the sea floor for snagged bits of coral and other sea life, which is thrown back in the water. (Photo by Tom Vater)

The dive industry does appear to have realized the need to protect the island's main source of income, and some businesses and organizations are running beach and reef cleanups, including New Heaven, Eco Koh Tao, Trash Hero and Island Travel.

On Koh Samui, Lutz Mueller, general manager of the Anantara Bophut resort, says that even Thailand's recently lifted nationwide curfew had an adverse environmental impact. "During COVID-19, many restaurants switched to delivery and the amount of packaging generated as a consequence is mad," he says.

Mueller argues that large hotel brands and local authorities have shown environmental commitment to slowing the effects of mass tourism in recent years. "Smoking has been banned on some of the island's beaches for a couple of years," he says. "Many hotels, including Anantara, have phased out plastic bottles. All our food, except for some of our meat, is sourced in Thailand. We produce our own compost and fertilizer. Our plant waste goes to feed local elephants and we promote elephant friendly and species-appropriate activities, such as visits to elephant sanctuaries." Mueller says the break in tourism is "an opportunity to change our business model, but it is also a risk to take the wrong turn. If everybody agrees not to drop prices too much, we can change the face of tourism on Koh Samui for the better."

However, with rates down 70% to attract domestic tourists -- and the risk of a regional price war to tempt foreign tourists at any cost -- conservation may take a back seat. "There is still a lot of construction happening, such as villas, which are the last thing we need here," says Mueller. "They will attract people who look for privacy in the post-COVID age, but the island's infrastructure can no longer support this growth."

Sinlapaprommard adds, "It's a question of education. That's why Eco Thailand takes schoolchildren on field trips to learn about respect of the environment, connections between trees and animals, and to get a better appreciation of nature.

"There are kids in Thailand who cannot identify a coconut. And if people don't learn to appreciate what their country has, they will only think about how to make money out of our natural resources. And they will get their food in 7-Eleven."