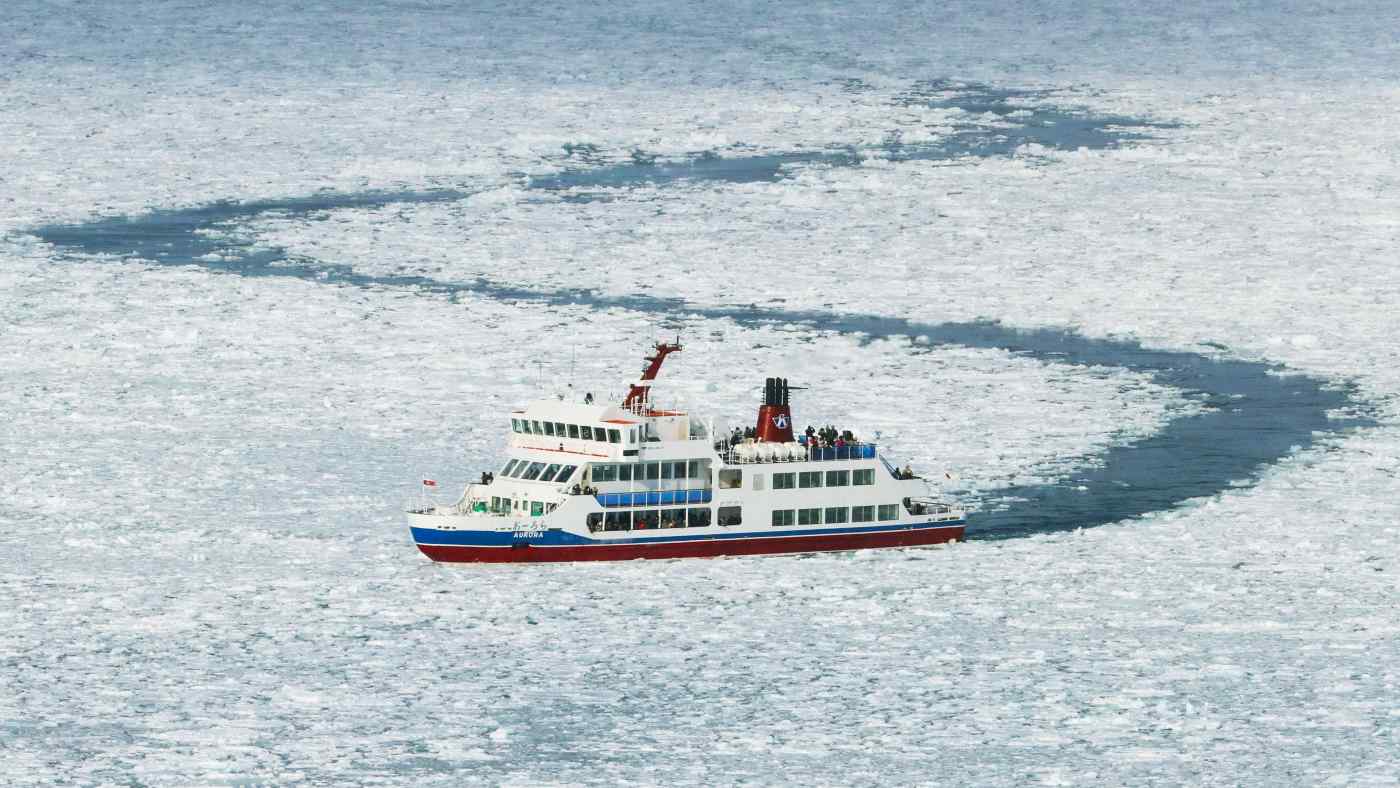 An icebreaker carrying tourists sails through drift ice in the Sea of Okhotsk off Abashiri, on Japan's northernmost main island of Hokkaido, in January 2017. The decks are a lot emptier this year due to coronavirus fears.   © Kyodo
GEOFF HISCOCK, Contributing writerMarch 18, 2020 13:02 JST | Japan
CopyCopied

MOMBETSU, Japan -- This winter's tale of two small cities on Japan's northernmost large island of Hokkaido starts hundreds of kilometers to the north in the ice-cold estuary of the Amur River in Russia's Far East.

There, in Shantarsky Bay, freshwater from melting snow mixes with seawater and freezes into ice floes that travel east around the island of Sakhalin and then south into the Sea of Okhotsk. Driven by wind and currents, the drift ice bumps up against the Hokkaido coastline from late January until March, creating a winter tourism business for Mombetsu and Abashiri, which lie about 100 km apart.

In a normal year, thousands of international and Japanese visitors get a close-up view of the drift ice from the decks of Japanese icebreakers that operate tours from the two cities. But 2020 is a far from normal year. The outbreak of the new coronavirus is wreaking havoc on the health and economy of tourism-dependent communities everywhere, and Hokkaido is being hit harder than most.

Sapporo, the capital, is extraordinarily quiet following the declaration of a three-week state of emergency by Gov. Naomichi Suzuki on Feb. 28. In a televised press conference, Suzuki, wearing a mask and holding a sign spelling out the emergency declaration, warned that the coronavirus situation was "turning more serious" and urged people to stay home for the weekend of Feb. 29 to March 1.

The impact is even more pronounced in the Okhotsk subprefecture, about 250 km northeast of Sapporo. In Mombetsu, a city of about 25,000 people involved mainly in fishing, forestry, mining and more recently tourism, the icebreaker Garinko-go II makes up to eight short cruises a day in peak season, carrying up to 150 passengers. A passenger aboard the Aurora 2 looks out over the drift ice toward the snowcapped mountains of Shiretoko National Park. (Geoff Hiscock)

Okhotsk Garinko Tower, the ship's operator, told the Nikkei Asian Review that the volume of drift ice this year was up, and it was in "good condition." The company was taking precautions against the coronavirus by extensive use among its staff of alcohol-based hand-washing. The company said most of its international customers come from other parts of Asia, particularly Hong Kong, Taiwan and Thailand.

But visitors were few and far between at the end of February. My noon cruise on Feb. 28 had only 30 passengers, and the prime 1:30 p.m. cruise, timed to accommodate day-trippers from Sapporo, left with less than 70. Nevertheless, there was a sense of anticipation among us as the bright red Garinko-go II sped into the Sea of Okhotsk in search of drift ice. Cameras were at the ready, though the subzero temperatures play havoc with battery life.

There was plenty to observe even before we reached the ice. Unlike conventional icebreakers, which ram through the ice, the 150-ton Garinko-go II has two giant screws at the front that churn through the water, breaking up the chunks of ice that the ship encounters. The ship takes its name from "gari-gari" -- Japanese onomatopoeia for a crunching sound. The Garinko-go II icebreaker operates from the Hokkaido port of Mombetsu fronting the Sea of Okhotsk. Its unique drill-like screws at the front of the vessel allow it to crunch through the drift ice. (Geoff Hiscock)

Within 15 minutes we were in the ice. The wind was howling, the driving snow stung our eyes, and a temperature of minus 10 C meant it was freezing on the outside deck. But this was what we came for. The sensation of sailing through a vast white field of drifting ice, watching the way the chunks break up, slide apart and sometimes crash back into each other, was exhilarating.

At Abashiri, the experience aboard the much bigger icebreakers Aurora 1 and Aurora 2 is different, but equally rewarding. On a brilliant blue-sky day, we encountered drift ice almost immediately after leaving the harbor. Our 45-meter, 500-ton vessel plowed straight into the ice, grinding a path through the thick, greenish-white sheets. The ship shuddered with each impact.

Watching the way the ice cracked, subsided and then bobbed back to the surface as the Aurora 2 moved through the field was mesmerizing. Migratory seabirds charted our progress, occasionally coming to rest on nearby ice floes. The area plays host to a variety of bird life, including majestic white-tailed sea eagles. There were no seals to be seen lounging on the ice, but the bright conditions meant we could see the snowcapped mountain peaks of Shiretoko National Park clearly on the eastern horizon. 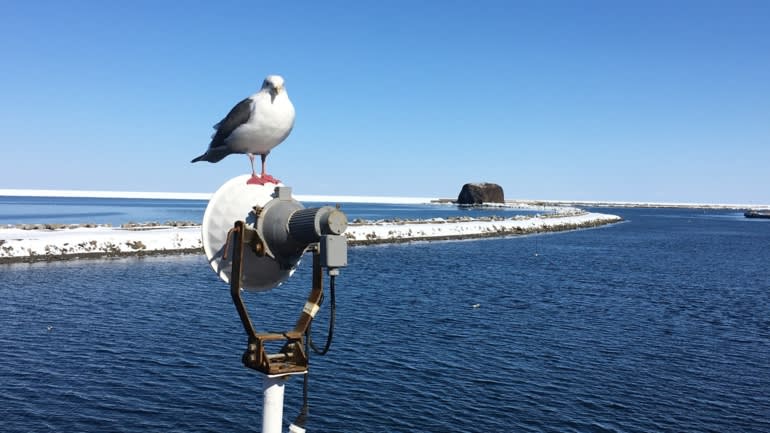 Top: A crewman aboard the Aurora 2 checks the vessel's position after docking back at Abashiri. Bottom: A seabird perches on the Aurora 2 as it prepares to leave Abashiri. (Geoff Hiscock)

The two Aurora ships can carry 450 passengers each, and run up to five times a day. As in Mombetsu, however, visitor numbers were well down, and the ships' coach parking area was virtually empty. An early morning cruise on Feb. 26 drew just 50 people, while the peak afternoon cruise set off with about 200 passengers, including a handful of overseas visitors.

Like Mombetsu, Abashiri has a drift ice festival in February, while a train running east from the city along the coastline also affords drift ice views. For more adventurous souls, the town of Utoro in Shiretoko National Park is developing its own tours where visitors can walk on the drift ice.

The Eastern Hokkaido Destination Management Organization, a tourism body, told Nikkei that this year's drift ice arrived about nine days later than normal, but the volume was much larger than the 2019 season and was expected to stay in the Sea of Okhotsk longer. 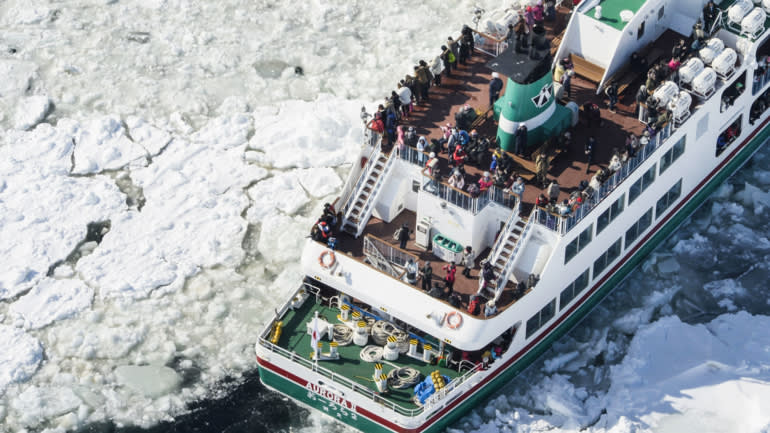 "We are very disappointed that we have much fewer tourists to see this due to the coronavirus outbreak," a spokesperson said. "The season is almost over, but what we can do is take videos and photos of the beautiful drift ice and prepare for next year's promotion. Tourists' safety is a priority in making decisions for next season."

According to the latest figures from the Japan National Tourism Organization, Hokkaido draws about 8 million overseas visitors a year. When Suzuki was elected governor in April 2019 he set about boosting aircraft movements into Sapporo's New Chitose Airport, with the goal of lifting tourism numbers even further.

But his state of emergency announcement has clouded the outlook for the island's tourism industry. On the evening I left Sapporo, three flights to Thailand and Taiwan had been canceled, and only my Qantas flight to Australia took off.

In Mombetsu, a new 235-passenger ship called Garinko-go III is due to replace the Garinko-go II in January 2021. But whether all those new seats can be filled is likely to depend on the length and severity of the coronavirus outbreak.