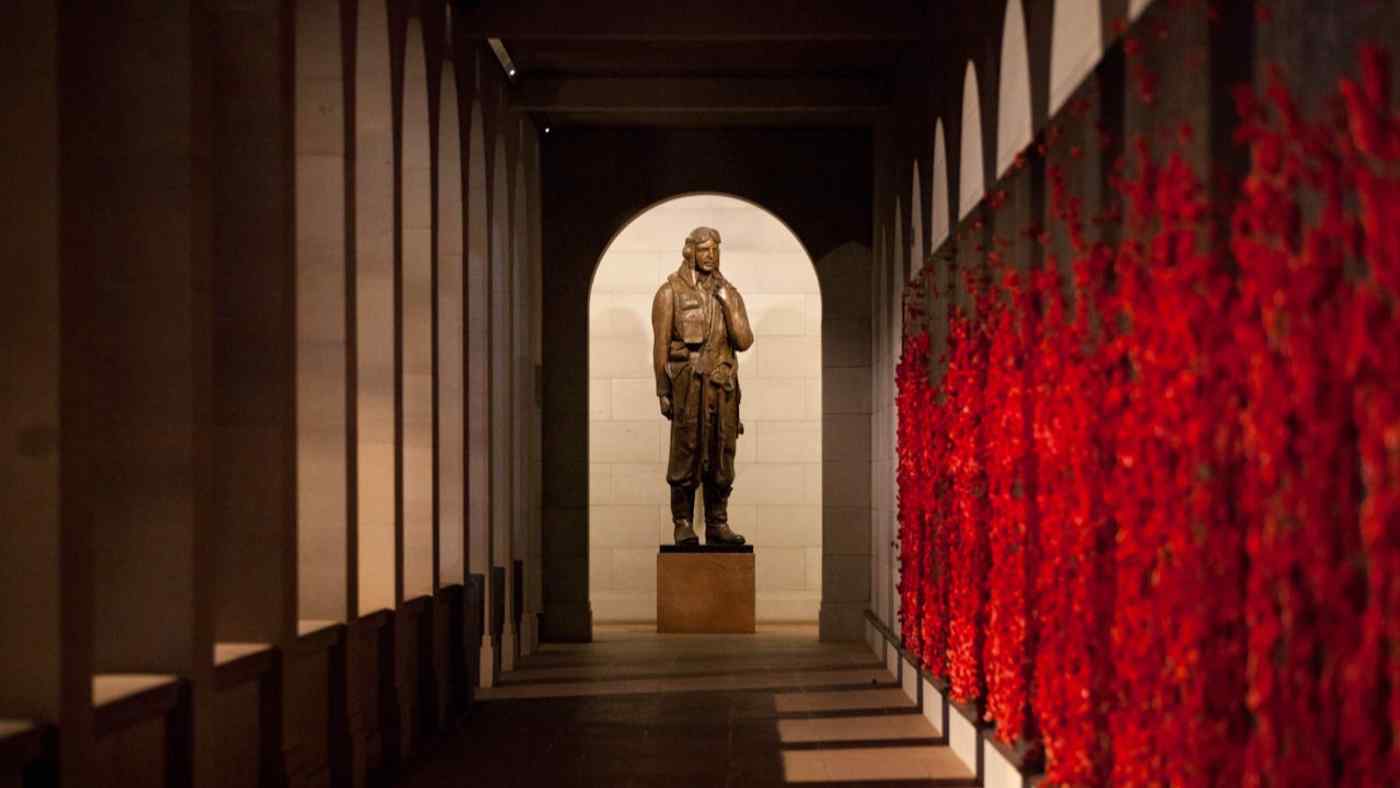 MELBOURNE -- A multimillion-dollar plan to upgrade Australia's national war memorial in Canberra is pushing ahead, despite critics' claims that the project is more focused on exhibiting military hardware than preserving the site as a place for solemn commemoration.

The controversy comes as Australia grapples with the chaotic end to its 20-year military involvement in Afghanistan, and as polling suggests a public preference for the funds behind the memorial's expansion to be spent on health or other services as the country tries to counter the COVID-19 pandemic.

Opened in 1941, the Australian War Memorial combines a museum, a memorial and an archive, and its self-described purpose is to lead remembrance and understanding of the country's wartime experiences. Recognized for its heritage value and architectural significance, everything about the memorial is carefully planned, from the symmetry of its inner courtyard -- flanked by bronze panels inscribed with the names of Australians who have died in conflict -- to its location in a direct line of sight from the federal parliament.

Perhaps most controversially, the project includes the demolition of Anzac Hall, an award-winning building opened in 2001 which was named for the Australian and New Zealand Army Corps, a military formation that fought in World War I. The term today is heavy with symbolism in both countries, summoning ideas of service and sacrifice. 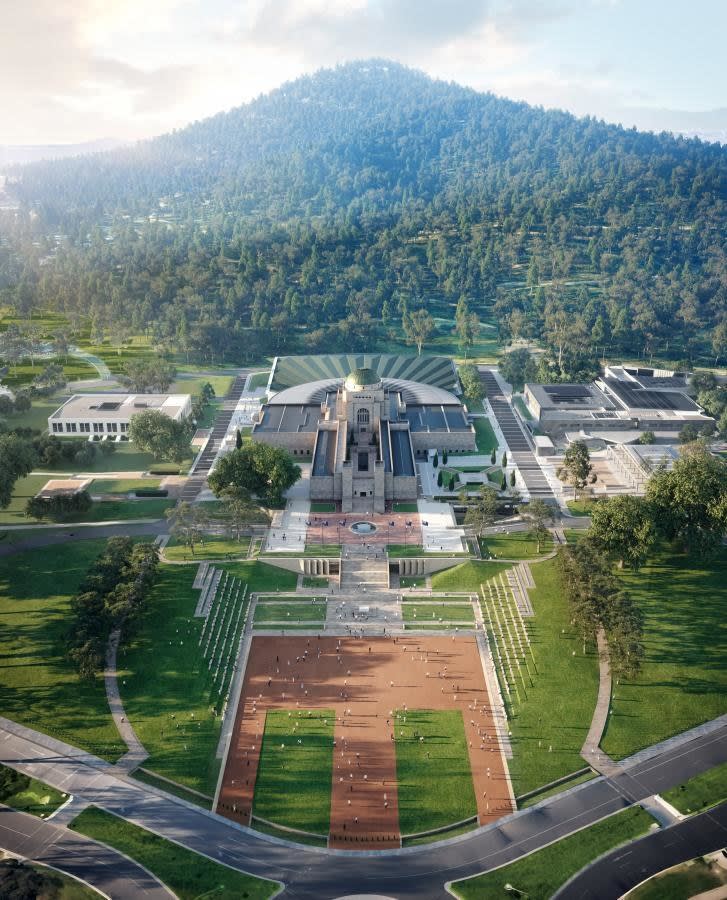 An artist’s impression of the redeveloped War Memorial. (Courtesy of Australian War Memorial)

After several inquiries, hundreds of written submissions, and public interventions from former defense chiefs, architects, historians, heritage experts, war veterans, activists and others, the first stage of the expansion proposal was recently approved by a planning authority in Canberra. Only a handful of more than 600 submissions made to the planning body were in favor.

The demolition of Anzac Hall commenced in early July -- a decision that Shannon Battisson, president-elect of the Australian Institute of Architects, labels an "absurd waste."

"Public architecture shouldn't be treated as a disposable commodity. It isn't something that should be pulled down in 10 or 15 years and replaced with something bigger and shinier," said Battisson, whose organization is the peak body for the architecture profession in Australia. "For us to be even considering pulling [this] building down ... a building that is entirely fit for purpose and that was designed to allow for expansion over time ... is really breathtaking."

The War Memorial, which operates as an independent publicly owned corporation, has justified the sweeping expansion -- and its hefty price tag -- as necessary in order to more thoroughly document the recent experiences of Australian soldiers in Iraq, Afghanistan and elsewhere. It also cites the need for more gallery space to exhibit "large technology objects" such as planes, helicopters, artillery and armored vehicles. 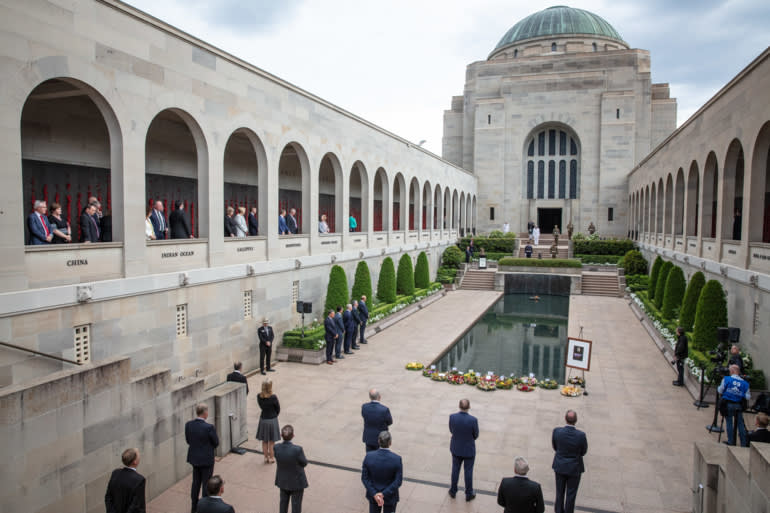 The Commemorative Courtyard of the memorial. (Courtesy of Australian War Memorial)

"The display of large military equipment and technology ... will allow the memorial to illustrate the experiences and personal stories of service of those who operated them, supporting a greater understanding of history," a War Memorial spokesperson told Nikkei Asia.

"Every item that will eventually feature in our expanded galleries will be chosen on the basis of its story; its ability to connect with veterans, and provide greater understanding for those who have not served. Plans for gallery development have not been finalized and objects -- large and small -- to be displayed in the newly designed spaces are under consideration."

But for critics such as Brendon Kelson, who headed the War Memorial from 1990-94, the emphasis on exhibiting military technology is contrary to the site's primary purpose as a memorial, and does little to convey the human costs of war.

"The institution was not set up as a museum, it was set up to commemorate those who have lost their lives in the nation's wars," said Kelson, whose father served in the first world war. "All this development has very little to do with telling stories of the people who fought in these wars."

The remaining redevelopment plans are subject to further public consultation that commenced in August, including several information sessions with the participating architects. The War Memorial spokesperson said it would "incorporate feedback" received through the process. Tension over the site's dual function as memorial and museum is at the heart of much of the debate about the redevelopment. Many of the project's detractors are not opposed to the evolution and development of the memorial over time, but contend that the focus should remain on remembrance. Some have argued that it would be more appropriate to display the large, newly acquired military items at a separate facility nearby.

"What we are doing at the moment, I think, is taking a very big step towards museum rather than memorial," Battisson told Nikkei. "That will really impact on the ability of the memorial to be [a] place of gathering. And I say that as the wife of a veteran."

The current layout of the memorial's commemorative and gallery spaces is highly regarded. Extensive exhibitions on the first and second world wars include a vast collection of artifacts, from diaries to photographs, letters and personal items, which yield fascinating insights into individuals' wartime experience. Stories emerge such as that of Lawrence Saywell, a prisoner of war who escaped and was sheltered by locals in a remote village in an area that before the war was part of Czechoslovakia. On May 8, 1945, the day the war in Europe officially ended, he was shot and killed by a retreating German patrol.

But the memorial has also come under fire in recent times for its choice of corporate sponsors, including several companies that manufacture weapons and defense technologies, including BAE Systems, Boeing, Lockheed Martin and Thales. A current exhibition on Australia's role in Afghanistan is sponsored by Boeing, and for a number of years the memorial's theatre was named after BAE Systems. In 2019, Brendan Nelson, director of the memorial from 2012 (and a former Australian defense minister), left his post to take up a position as president of Boeing Australia. Britain's Prince Harry tours the Afghanistan exhibition at the memorial in April 2015.   © Reuters

Brendon Kelson finds the sponsorship arrangements "unconscionable." "It's like a tobacco company giving money to a cancer research center. It just makes no sense," he said. "When they started to do this, the War Memorial and its [governing] council lost its moral compass."

The debate over the memorial's redevelopment coincides with an ongoing domestic reckoning over Australia's role in Afghanistan following a searing report into possible war crimes, released in redacted form last year, which uncovered credible evidence of 39 murders allegedly carried out by Australian special forces. A small contingent of Australian troops assisted U.S., British and other foreign forces with the evacuation of civilians from Kabul airport in August, as the U.S. military finally exited the country that is now back under Taliban control.

The specter of alleged war crimes "should be a prompt for us all to focus on getting the history right," including within the memorial's walls, said Sue Wareham, president of Australia's Medical Association for Prevention of War. "If we're going to pay honor to those who have died in our wars, we've really got to look at the question of why [we fight] and not focus on how we fight and what good soldiers we are."

The cost of the War Memorial's planned expansion dwarfs spending allocations for many other cultural institutions in Australia. The funding -- committed before the COVID-19 pandemic -- is also being questioned in light of the serious impact of the virus on the Australian economy. A recent poll of more than 1,000 respondents, conducted by the Australia Institute, a think tank, found that one in two Australians would prefer the funds be spent on services such as health and education, and a further 26% would prefer the money to be used for veterans' support services.

"It needs to be noted that at every opportunity where the public has been given the opportunity to speak, they have voiced their opinion loudly and broken all records for the number of submissions put in ... and yet it has been continually ignored," Battisson said. "That's such an incredibly dangerous precedent to set, and it's one that affects any public piece of architecture that the Australian people own."