SINGAPORE -- The Hollywood romantic comedy "Crazy Rich Asians" became an international sensation this year with its depiction of mind-boggling Singaporean affluence. But some in the city-state have been quick to note that the ostentatious displays of wealth are a world apart from the average resident.

In the film, a Chinese-American New York University professor named Rachel Chu visits Singapore to meet the family of her boyfriend, Nick Young. Much to her surprise, she learns that he comes from one of Asia's richest families.

In one scene, Nick's cousin Astrid casually offers her soon-to-be ex-husband the home they have shared because she has no need for it. "I have 14 apartment buildings that I own," she boasts, saying she could just live in one of them instead.

Some viewers may find scenes like this stretch the limits of belief, but life often imitates art.

Kevin Kwan, the author of the novel the film is based on, says he was inspired by his childhood experiences in Singapore, where he lived until age 11 before immigrating to the U.S.

The tiny, resource-poor city-state has grown into one of the world's richest countries in the 53 years since independence. Its per-capita gross domestic product tops that of Japan. And Singapore ranks ninth in the world in terms of assets per capita among adults, according to a 2017 survey by Credit Suisse.

It ranks first in Asia.

In addition to the traditional upper class -- the regular names on Forbes' Singapore Richest List, who have built business empires and wealth over decades -- a cohort of "new rich" is rising as well. Both groups have an affinity for playing the property market to amass still more money.

Stories of new wealth frequently circulate on social media. Singapore is home to one of the world's biggest collectors of coveted Birkin handbags -- a hard-to-get line from French brand Hermes that costs up to hundreds of thousands of dollars. One woman who runs a cosmetics company in Singapore and is divorced from a wealthy Indonesian has a stash of 200 Hermes handbags at home.

Some of Singapore's wealth appears to be trickling down to the upper-middle class, who share the same zeal for building assets through real estate investment. In early July, the government announced a tax increase -- to take effect the following day -- and other measures to keep the property market from overheating. People hurried to buy before the higher tax rate was in place, and homes priced around $1 million sold handily.

It appears that many Singaporeans embraced the "Crazy Rich Asians" vision of their dream lifestyle. The movie topped the local box for two weeks after it opened in late August. "I enjoyed watching the city that I live in, in a Hollywood movie, and liked the fashion," a female university student said.

But not everyone was quite so enamored. For some, the film was a reminder of inequality.

"Crazy Rich Asians" parodies have been cropping up on YouTube and other video sites. Mimicking the movie trailer, the "real" Singaporean versions commonly feature backdrops of simple public housing known as HDB flats, where 79% of Singaporeans reside.

In this highly densely populated country, mansions as large as the one Nick's grandmother lives in are nonexistent. Indeed, the scenes of the house were shot in neighboring Malaysia. 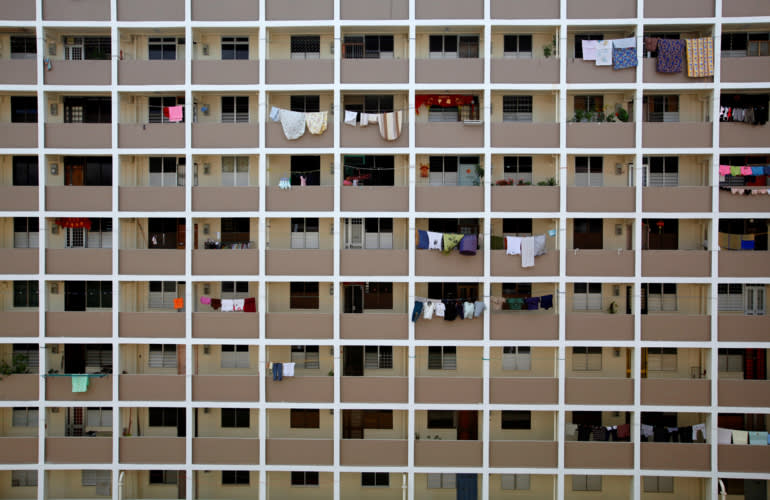 Public housing complexes like this one are home to 79% of Singaporeans.   © Reuters

Only 5% of Singapore residents enjoy the privilege of living in a landed house.

In his piece, the female lead asks: "Who said average can't be happy?"

Singapore does not struggle with poverty the same way some of its less-developed neighbors do. But the wealth gap is still an issue. Income inequality in the city-state is lower than in the U.S. and U.K. but higher than in many other developed countries -- including Germany, France, Japan and South Korea -- according to the Singaporean Ministry of Finance.

The comparison is based on the Gini coefficient, a measure of inequality, after considering the income redistribution effects of taxes and transfers. Singapore does not have an inheritance tax.

Another growing concern is limited social mobility. Research by the Institute of Policy Studies, a state think tank, late last year showed that a Singaporean who lives in an HDB flat has fewer than one friend, on average, living in non-HDB housing.

"The sharpest social divisions in Singapore may now be based on class, instead of race or religion," The Straits Times newspaper reported.

Policymakers are likely loath to let the spotlight linger on Singapore's crazy rich side, since social divisions can lead to instability.

"We should frown upon those who go for ostentatious displays of wealth and status, or worse, look down on others, less well-off and privileged," Prime Minister Lee Hsien Loong said in parliament in May, discussing the matter of social mobility. "We should emphasize the commonality, not accentuate the differences."