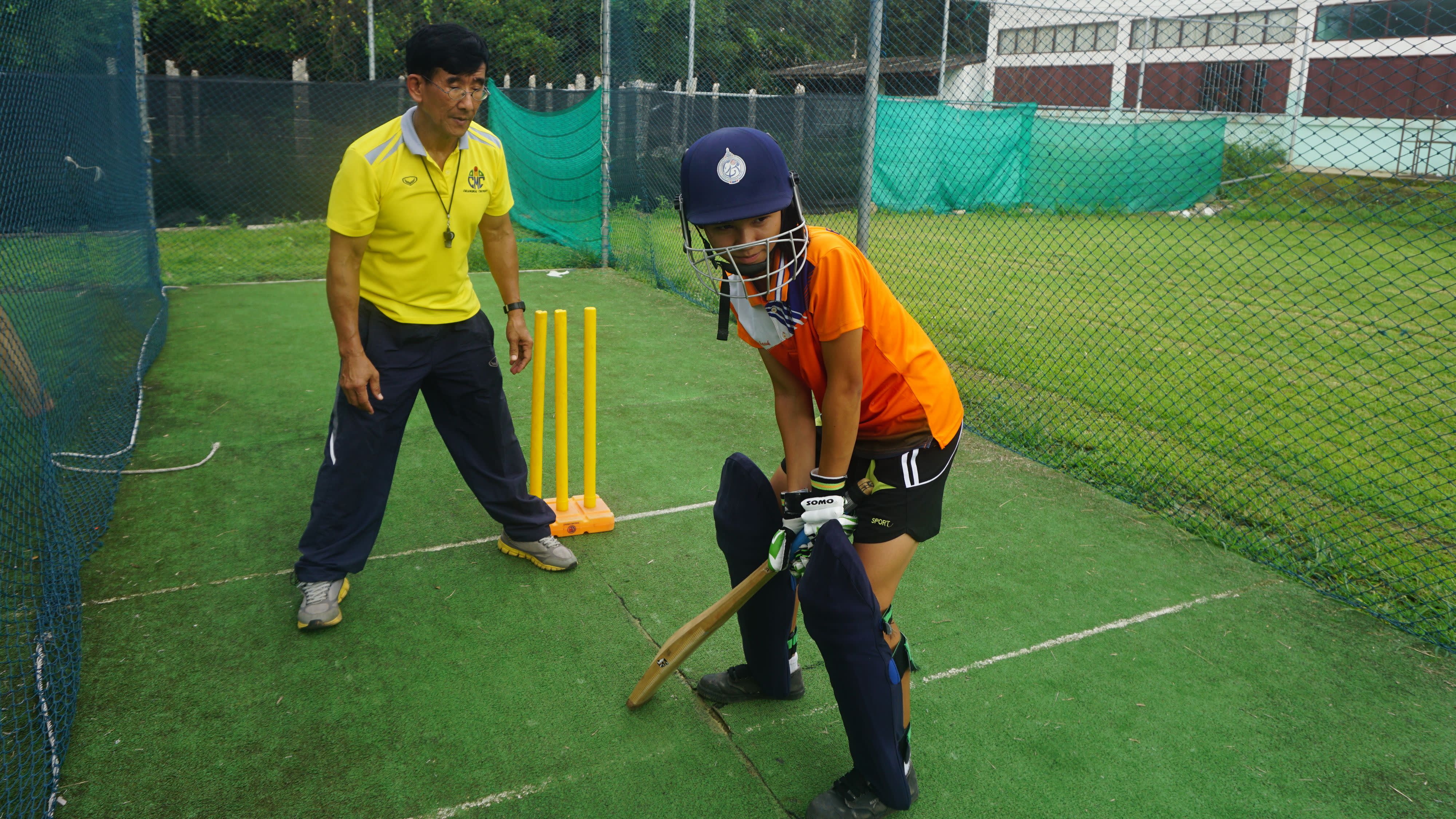 LUANG NUA, Thailand -- There is a band of young women, some without parents, others with alcoholic mothers and fathers jailed on drug charges, who have come down from the mountains of northern Thailand. Poverty rules there --and almost nobody can tell the difference between a stump and a wicket.

Yet these feisty, dedicated girls from ethnic minority hilltribes -- often denigrated by lowland Thais -- have emerged as national champions, repeatedly defeating teams from more privileged backgrounds in a rather unlikely sport -- cricket. Some have played in teams that have brought home gold medals from international competitions, and touched hearts throughout the country.

Cricket is an enduring legacy of British colonialism in large parts of Asia and elsewhere, but is not generally associated with Thailand, which avoided foreign colonization, even though the game was played in the country as early as 1890 by foreigners and Thais educated in Britain.

But the sport has grown rapidly in the country recent years, with 19 men's teams now playing in a national league. The Cricket Association of Thailand, the sport's national governing body, joined the 103-member International Cricket Council in 2005, and both men's and women's teams have taken part in ICC tournaments for national teams.

Despite its growing popularity, the sport made little headway in remote rural areas until 2002, when a group of cricket-promoting Australians in Chiang Mai, gateway to the tribal areas, tried to plant the game in alien soil, beginning with the city's private schools. It seemed like a non-starter, and enthusiasm faded over the years -- except at Cholaprathan School in Luang Nua, a village school near Chiang Mai attended by many hilltribe children. Far from their homes, they board at several Christian foundations. A coach and one of his stars at practice (Photo by Denis D. Gray)

It was hardly an auspicious start. The Australians provided three days of basic instruction, and handed out some inexpensive equipment, including half a dozen plastic bats, with some balls and stumps (three of which are needed to form a wicket). But the episode inspired Aroon Numchokchaijarenkul, the school's sports teacher, to study the game on his own through books and videos.

"Our school couldn't compete in football and other sports with children from the cities. But here we saw the opportunity to do well at the national level. Cricket was our opportunity,'' the coach said in a recent interview, bubbling with enthusiasm during an early morning practice session.

With 35 years of experience coaching other sports, Aroon quickly realized that the school had some potentially outstanding cricketers. Used to harsh conditions and hard lives, they were physically tough, ready to practice for hours in high heat and rain, and endowed with "drive and ambition because they know they have fewer opportunities than others.''

Aroon puts the girls (and boys, who play in separate teams) through rigorous physical training, fosters ethical behavior, and leads them in Buddhist-style meditation to deepen their concentration. ''I relate to them like a teacher, a father and friend,'' he said. 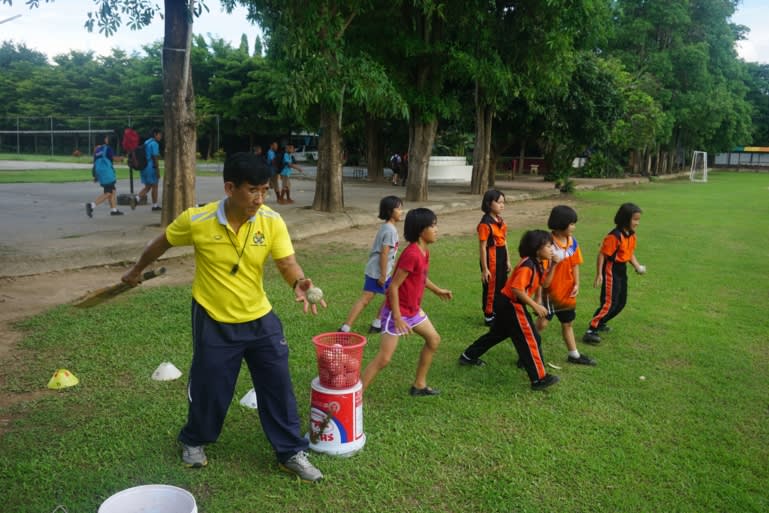 Coach Aroon bats the ball for catching practice on the school field at Cholaprathan School in Luang Nua, near Chiang Mai. (Photo by Denis D. Gray)

The girls then throw themselves into competition against opponents from more prosperous areas, often equipped with top-of-the-line equipment such as $300 bats. They make do with second best -- their bats cost less than $100 -- donated by supporters.

The results have been outstanding. Pitted against 25 teams from other areas the Luang Nua girls have captured the national under-15 championships four times in the last four years, and taken four gold medals in the under-19 category. Players from the school were selected for Thai national teams competing in the 2014 Asian Games in Incheon, South Korea, and the 2017 Southeast Asian Games in Kuala Lumpur, where the women captured gold and the men bronze.

"We came from the mountains, so we are stronger," said Siriporn Thinchalomesri, an orphan from the Karen tribe who is one of the current group of players. "We also have a strong spirit and are really united," said Siriporn, who is 15. 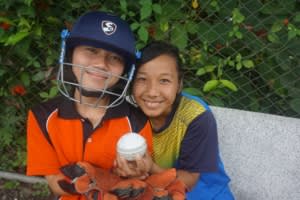 About 100 of the school's 500 students play cricket, providing a substantial group of enthusiasts from which squads of 15 are selected for outside competitions. The girls include players from most of the Thai hilltribes, including Akha, Hmong, Lahu and Lisu as well as Karen.

But the school's victories have yielded far more than shelves of trophies. Youngsters -- cricket practice starts with first graders -- can look up to role models whose participation in the sport has allowed them to travel, sometimes receiving money from the government after winning medals internationally, and to lead more rewarding lives after graduation.

Aroon said most of the girls are excellent students. Few slip into lives ruined by prostitution or substance abuse -- problems that have plagued their parents' generation. The players also say they have not encountered the slurs often directed at hilltribe people by lowland Thais -- common insults include claims that the hill people are ignorant, uncouth, "smell of the mountains'' and are not "real" Thais. Hundreds of thousands of hill people are barred from citizenship, and the groups have little representation at the higher levels of officialdom.

"When our girls play nobody can look down upon them. They have confidence,'' Aroon said. ''Nobody teases them. Nobody insults them.'' 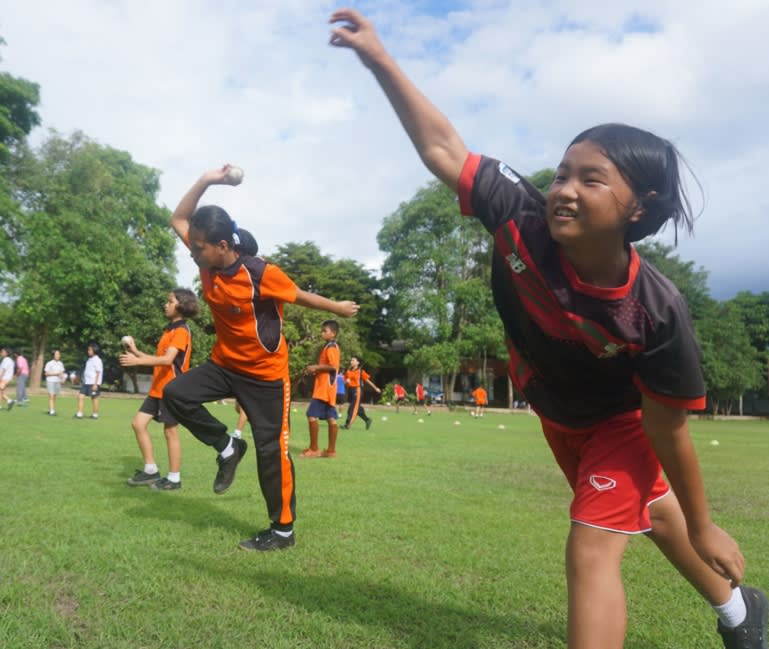 At the school, as in poorer environments in other Asian countries, success in sport has proved empowering. "Sports provide more opportunity to the underprivileged to make something out of their lives,'' said Vijay Joshi, editor-in-chief of The Press Trust of India -- a cricket expert who is also a former foreign correspondent in Thailand for the Associated Press. "In India, there are stories galore of sports people achieving fame and wealth even though they came from poor families.''

Surrounded by the current generation of school athletes, Aroon beams with evident pride. Selected players are going through intensified training for October's Association of Southeast Asian Nations' School Games in Malaysia, practicing before and after school hours and living together next to the practice nets.

Batting in the nets is one of the star players, 14-year-old Sunida Jaturongratthana, who said she feels that playing the game has made her "stand out" from the crowd. "When I return home, I feel proud,'' said the motherless daughter of a farm laborer, who aspires to be a tourist guide one day.

"People should now know that mountain children are in no way lesser than others,'' Aroon said. "Often they are better. The only difference is their poverty.''