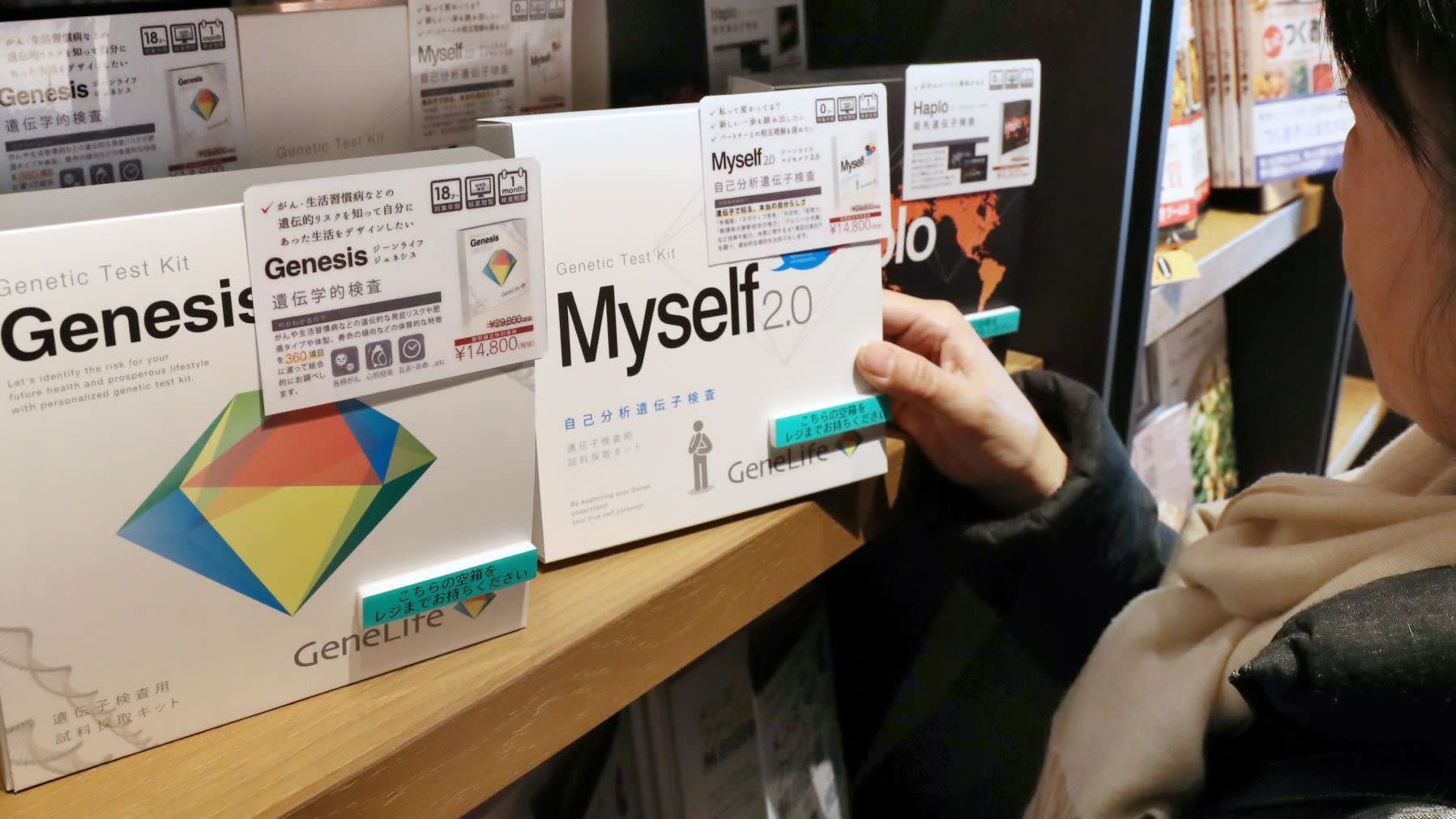 A would-be customer checking out genetic test kits provided by Genesis Healthcare, which operates in seven countries across Asia.

SINGAPORE -- In an era of business buzzwords like "startup" and "fintech," a commercial model built on spitting into a tube might not seem the most propitious idea. But Asia's nascent DNA testing sector is likely to expand as related technology becomes more affordable and as scientific research advances.

Behind the trend is the region's growing affluence. As tens of millions of people move from the countryside to cities across Asia, so-called "lifestyle" conditions such as diabetes and heart disease become more commonplace as people eat more processed food and replace physically-taxing employment such as farming with sedentary office work.

Peering into a person's DNA can yield insights about susceptibility to particular health conditions or diseases -- and a growing consumer awareness of such advances is driving much of the DNA sector's Asian growth, note companies involved in testing.

"We believe that with the rise of obesity in Japan and Asia, more people are now keen to understand how genes and nutrition are intertwined in one's health," said a spokesman for Japan's Genesis Healthcare, which operates in seven countries across Asia and specializes in health-related DNA testing.

"We have a growing business," said Charles Harris, president of EasyDNA Philippines, part of the EasyDNA group, which has offices in more than 40 countries. "We are experienc[ing] about a 20% annual growth rate," Harris added.

According to Credence Research, a U.S.-based market research firm, the value of the global direct-to-consumer genetic testing market is expected to quintuple over the next few years.

"The global direct-to-consumer genetic testing market was valued at $117.1 million in 2017 and is expected to reach $611.2 million by 2026," Credence said in a February report, predicting that Asia would be the world's fastest growing region for the sector over that time frame.

Costing the equivalent of a few hundred dollars, a mail-order DNA test can be taken at home by following a series of uncomplicated step-by-step instructions -- usually starting by taking a saliva swab or spitting into a test tube -- before sending the sealed test back to the testing company.

Depending on the kind of test, and the testing company, results can be known within seven to 10 working days -- or fewer, if the test is being taken for an urgent reason. Health and paternity appear to be the main grounds for DNA testing in Asia.

"Apart from paternity tests, we do carry out prenatal paternity tests as well as prenatal screening and genetic health risk, susceptibility to particular diseases," said Sharifah Khairiyah Syed-Mohamad, director of EasyDNA Singapore, which fields tests taken in the city-state and neighboring Malaysia.

Even as obesity and diabetes are rising, health-conscious Asians are driving a new wave of fitness center chains in the region's cities -- backdrops for millions of lycra-laden, sweat-laced social media feeds.

But the region's gym craze is adding another dimension to the DNA testing sector's growth as consumers turn to testing in hopes of improving their exercise routines to tally with their DNA profiles.

"I wanted to see if I could lose weight more easily," said Nabilla Icha*, a 27-year-old teacher in Kuala Lumpur. "The test was easy to do and results were fast. Now I am trying to figure out how to change my workout."

"A personalized guide to nutrition and exercise based on your personal genetics is gaining interest due to the realization of [the] importance of targeted health and exercise planning," said Syed-Mohamad, director of EasyDNA Singapore.

"Asia is a growing market for us," said David Nicholson, co-founder of U.K.-based DNA Worldwide Group. "A lot of the tests are health-related; what kind of exercise to do?" he said.

In the West, particularly in immigrant-based societies such as the U.S., deciphering complicated ancestry puzzles -- often blurred by the complexities and diversity of family trees going back several generations -- is an established and popular aspect of DNA testing.

"Increasing interest in doing a DNA test comes from the desire for people to discover more about their family history and ethnicity, including their ethnic mix and potential relatives," said a spokesperson for Ancestry, a U.S. company with 3 million subscribers and a database of 10 million people.

This type of testing is less prevalent in Asia, according to Harris, who said Asian consumers want "need-to-know testing as opposed to nice-to-know testing." He added: "While we offer a complete menu of clinical DNA tests, our clients are just interested in what they need for family health or legal purposes."

Even so, there is potential for growth in Asian ancestry testing, believes David Nicholson of DNA Worldwide Group. "People of Asian ancestry in the U.S. take such tests, are pleased with them, so it spurs interest among friends and relatives in Asia."

Parts of Asia have seen waves of migrations throughout history, and research papers published in July in the journal Science suggests that disentangling heritage issues may be more complicated in Southeast Asia than in some other parts of the world.

The findings suggests that one reason for Southeast Asia's relative ethnic diversity is that farmers arrived in the region more recently than in Europe, leaving less time for the type of intermingling that dilutes genetic variation.

Such diversity could mean that the region's people might learn much about their ancestry from DNA testing, especially as the technology progresses and scientific accuracy improves.

Several factors go into determining how precisely one can identify an individual's ancestry from his or her genome sequence, according Mark Lipson of Harvard Medical School, one of the authors of "Ancient genomes document multiple waves of migration in Southeast Asian prehistory."

"One of the biggest is ... the availability of reference sequences for comparison -- having a lot of references is how a commercial DNA/ancestry company can identify detailed recent geographic origins of a person's ancestors," Lipson said.

Another paper in the same edition of Science, "The prehistoric peopling of Southeast Asia," suggested that Southeast Asians "derive ancestry from at least four ancient populations."

"The fact that regions such as Southeast Asia are so diverse should make it easier to pick apart genetic makeup," said Hugh McColl, a Ph.D. student at the Center for GeoGenetics at the Natural History Museum of Denmark, a co-author of the paper.

And while there have been concerns raised in the U.S. about the privacy aspect of DNA testing -- whether companies can be trusted not to share this most personal of information with third parties -- the novelty of having one's DNA analyzed is likely to spur interest among consumers with money to spend on a kit, even if there are no pressing reasons like parentage or inheritance disputes to resolve.

Emmanuel Estrada* , a Singapore-based Philippine national, said that he took a DNA test after hearing about the procedure from a cousin in the U.S. who bought a kit online. "I kind of did it out of curiosity, just to see how it works," he said.

*pseudonyms used due to privacy concerns raised by interviewees