The floating village of Chnok Tru consists of about 1,700 households on a tributary of the Mekong River.
Life

PHNOM PENH -- Sak Seam, 69, chief of Chnok Tru, a village in central Cambodia, is worried. The floating village of about 1,700 households is located on a tributary of the Mekong River. "The villagers will be unable to survive if the fish catch decreases further," he said.

Hydroelectric dams constructed or under construction up the Mekong, in China and other countries, have changed the flow and the level of water in the tributary, disrupting the fish ecosystem there.

Most residents in the village depend on fishing for their livelihood. Not a few fishermen take to illegal fishing when their catches decrease. Some fishermen use small-mesh nets that catch fry as well, and others fish by night out of season. Indiscriminate fishing spreads and stocks decrease, leading to a vicious cycle.

"I am thinking positively of moving the village to the land," the village chief said, seated on a swinging hammock made of a net seized from a fisherman who fished illegally. On land, the villagers would not have to depend on the declining fish because they could work in agriculture, including vegetable farming. Sak Siam, chief of the village of Chnok Tru, sits on a hammock made from a net seized from a fisherman who was fishing illegally.

The education system for children could also be improved, he said. The village chief submitted a petition to the government, asking for an area of land to which the village could be relocated. However, he has received no reply for four years and remains unable to advance the relocation plan. These children go to an elementary school in the floating village. In the fishing season, 90% of the school's 174 students are absent from school to help their parents.

Meanwhile, the dam projects on the Mekong are progressing and the fish are becoming harder to come by. In the upper reaches of the river, in China, six dams are already in operation and four dams are under construction. In the lower reaches, Cambodia and Laos plan to operate 11 dams by 2030. When the 11 dams have gone into operation, fish catches will decline 30% in the four downstream countries of Thailand, Laos, Cambodia and Vietnam, Thailand's Mae Fah Luang University estimates.

Cambodia will be the most seriously affected and is expected to see fish catches fall to 340,000 tons a year, less than half the current level. A villager cleans a fish he just caught. Fish catches have fallen sharply over the past 10 years.

With concern about adverse impact on the environment, Western countries and international financial institutions have frozen their support for the dam construction projects along the Mekong. Moving in to replace the funding are China, which wants to increase its influence in Southeast Asia, and bigger surrounding economies like Thailand, which aims to obtain electricity. On the Tonle Sap River, a tributary of the Mekong, fishermen continue to cast nets from sunrise to sunset.

In Cambodia, electricity rates are high by global standards, and ensuring a stable supply is an urgent task for the country to develop its economy and attract foreign capital. With China's support, the Cambodian government is forging ahead with the dam projects. 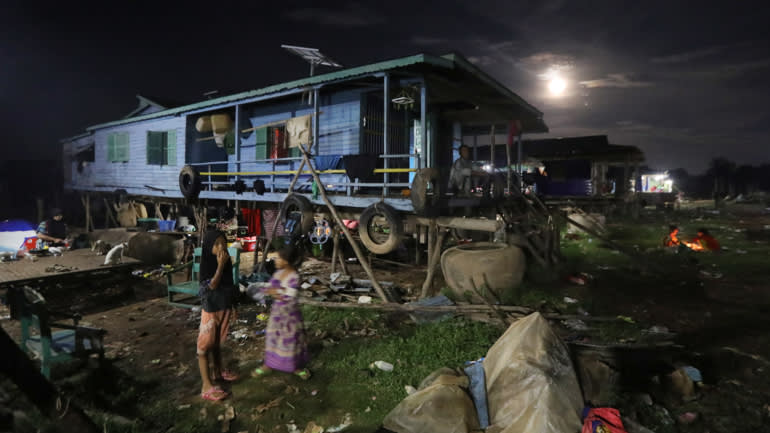 The floating village, meanwhile, is helpless before the pressure from stronger countries and the authoritarian regime of its own country.

There is also disharmony among villagers. Ethnic minority residents are more resistant to moving to a new site on land, even though fish catches have halved over the past decade. Toria Sules, a 32-year-old Muslim fisherman, said, "I am worried that we may leave the village with the mosque and our community may fall apart."