"As soon as we began communicating, we realized we had a lot in common. We bonded over our love for travel and food, exchanged numbers and got to know each other better over texts that soon turned into hourlong calls," recalls Verma. After chatting for a month, the two are now planning to meet and "take the relationship forward."

Shalini Arora, 27, and Aakash Parikh, 29, a Bangalore-based couple who started dating during the lockdown through Bumble, a U.S.-based dating app, say they discovered a lot about each other through multiple online dates. "Both our parents were keen that we meet our potential partners through matrimonial [web]sites. But we didn't want that. So we started exploring online to see if we wanted to take our engagement forward with any of our virtual dates. And that's how we clicked," says Arora.

Dating apps are revolutionizing romance in India, the land of arranged marriages. In a country where casual cross-gender relationships are still not socially accepted, youngsters are breaking convention to seek love and companionship online, not necessarily with the intention of marrying.

Dozens of apps -- other big names include Woo, TrulyMadly, OkCupid, Happn, Hinge, Tantan, QuackQuack and HiHi -- are helping members of this growing demographic group to pair up with partners of their choice. According to online global data aggregator Statista.com, the online dating segment's turnover in India is expected to reach $783 million by 2024 from $454 million in 2021, making the country the second-largest national revenue generator for dating apps after the U.S. 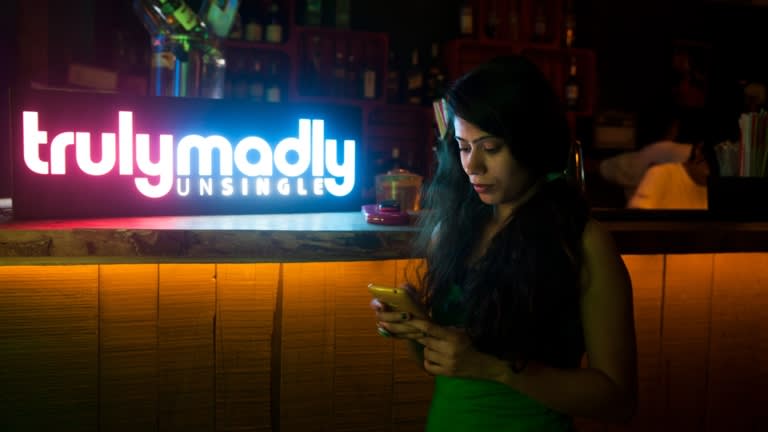 A woman checks her phone at a party hosted by dating app TrulyMadly in Gurgaon, India.    © AP

The numbers reinforce Indian society's rapid evolution, which is being accelerated by growing access to technology, especially smartphones. India currently boasts of one of the world's highest smartphone penetration rates, with an estimated 760 million connections this year, almost double the 2017 total, according to the Ministry of Commerce and Trade.

Much of this growth has been spurred by India's 400 million millennials -- the world's largest such group. During the pandemic, the dating app market grew phenomenally as millions stayed home, and the country saw its internet user base explode, with plummeting data costs. Currently, dating apps reach 2.2% of India's total population, with projections of 3.6% by 2024, according to industry surveys. A couple in New Delhi's Lodi Garden: Dating culture in India has undergone a massive change since the advent of the internet.   © AP

Jitesh Bisht, CEO of HiHi, an Indian app launched last year, says there has been a strong response to the app, which aims to "build a thriving community of young, energetic and dynamic users engaging with each other on a safe, secure and clutter-free platform."

India's pandemic-related lockdowns, which have encouraged a widespread transition to an increasingly online life, have provided a tailwind for the industry. For example, OkCupid, which launched in 2018, registered a 26% increase in conversations and matches last year. According to Ravi Mittal, founder of QuackQuack, the pandemic has witnessed "more and more millennials investing their time in forming stronger emotional bonds with their potential matches online."

The popularity of dating apps also has much to do with tectonic sociocultural shifts, say trend watchers. Before the internet, when dating culture was nonexistent in India, youngsters would meet the opposite sex mostly with the intention to marry. In the 1990s these interactions began to happen through proliferating matrimonial sites such as Bharatmatrimony.com, Jeevansathi.com and Shaadi.com. Now, though, forging relationships that may or may not culminate in marriage is becoming increasingly common across the country. A restaurant in New Delhi in April: India’s pandemic-related lockdowns, which have encouraged a widespread transition to an increasingly online life, have provided a tailwind for the industry. (Getty Images)

Unlike matrimonial sites, dating platforms follow a more liberal approach to relationships based on users' shared values and lifestyles rather than religion, caste or community. This resonates better with the young who have shed some of their reserve with increased travel and exposure to Western culture though TV shows and internet streaming platforms.

"Indian society is in a churn," says Delhi-based sociologist Bhavna Kapoor. "Rising education and financial independence among the youth, especially women, are making online dating more popular. The young are dropping their inhibitions to look for like-minded companions, a dramatic shift from the time [when] arranged marriages were the only way to tie the knot. Also the youth these days are far busier [and so do not have time] to cultivate a large social circle or to find dates offline."

Despite the sweeping winds of change, savvy app founders are customizing products to the needs of the relatively conservative Indian market. "We realize that India is culturally different and diverse, and what matters to the Indian singleton might not matter to someone in the West," says Anukool Kumar, marketing director of OkCupid.

For example, says Kumar, 92% of OkCupid's users feel their values differ vastly from those of their parents, and 79% believe that the choices they make are different from those made by their friends. "The loosening of social strictures around gendered roles in relationships is reflected nowhere more clearly than on dating apps. As the dating scenario in India evolves, more people will turn to dating apps to find love and companionship," says Kumar.

Indian parents are also learning to take a more tolerant view of girl-boy relationships. "Me and my husband had an arranged marriage, but our children want to ensure they share the same interests, values, professional ambitions and even political ideologies with their partners. Slow dating helps them widen their choices," says Priti Nagpal, 56, whose 25-year-old son recently married after dating for two years.

It is not just metropolitan young people who are driving the change. App executives say they have been pleasantly surprised by unexpected demand from smaller communities. "Most of our users come from [midsize] tier-two cities. The platform added 3.4 million new users last year, with 70% coming from tier-two and [smaller] tier-three cities," says Mittal. College students celebrate the Holi festival in New Delhi in March. Ninety-two percent of OkCupid’s users feel their values differ vastly from those of their parents, according to Anukool Kumar, the company's marketing director. (Getty Images)

During the lockdown, QuackQuack saw 70% of new users logging in from smaller cities, while only 30% were from India's biggest cities. The dating app currently has around 12 million registered users, 7 million app downloads and around 1 million active users. TrulyMadly, which has more than 8 million registered users, also says it is recording higher revenue from tier-two and tier-three cities.

Another revelation about the Indian market, say app founders, has been that not all users are seeking love or relationships. "We've noticed that many users download the apps just to be part of shared experiences with their friends and peers or the new and popular global trend," says a HiHi executive. India's aspirational middle class, a demographic of over 66 million people, is keen to emulate the Western middle-class lifestyle, he adds.

Indian women's ebullient outreach to men on dating apps has been another surprising discovery, say company representatives. According to Bumble, women in India have made the first move on the app more than 15 million times and send twice as many messages on the service as the average for women in the rest of the world.

"The main reason why dating apps are thriving in India is because they're helping break conventional barriers, providing people with more choices, control and liberty," says Kapoor. "They are playing the role of modern-day cupids."