Adventure motorcycles get Western professionals on the road again 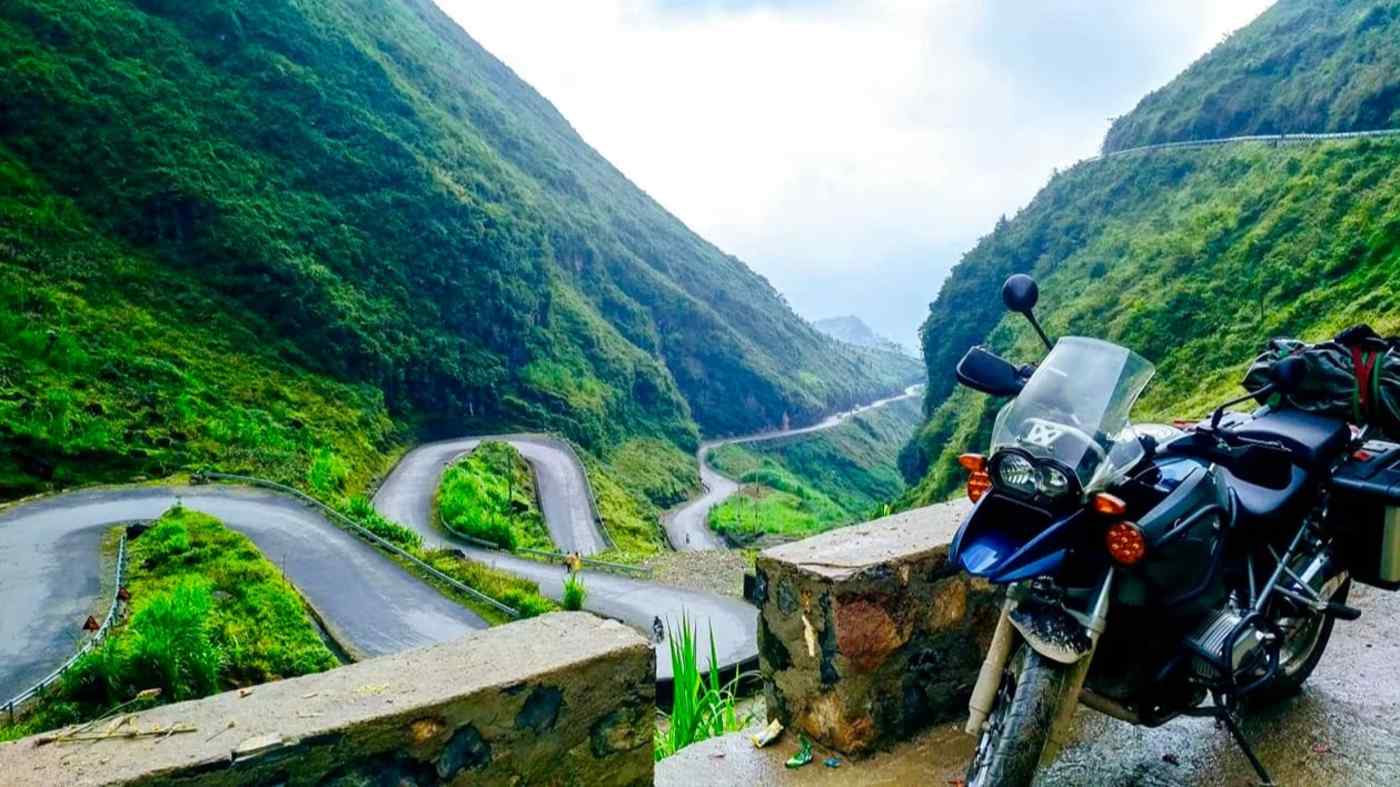 HANOI -- The large European motorbike purrs with pleasure as the road -- a concoction of gravel and broken asphalt peppered with potholes -- curls up the face of a 1,500-meter-high mountain pass in Dong Van, a remote frontier district in northern Vietnam. Whatever nature throws at it -- mud, rain, river crossings and even snow and ice -- is child's play for the BMW 800GS, which has suspension that can be adapted for different terrains.

This German-made high-tech road machine would have been unthinkable in past decades, when the only way for intrepid travelers to explore the back roads of Vietnam, Cambodia and other parts of Southeast Asia was on 250 cc trail bikes from Japan.

The small-capacity engines of such bikes are not suited to fast riding on highways, and their narrow and thinly padded seats are not kind to backsides on long journeys. Luggage was always a problem: Riders carried bags on their backs or strapped them precariously to cargo racks. And finding spare parts outside big cities caused major headaches when the old trail bikes broke down. I once lost five days in the flyblown Cambodian town of Stung Treng waiting for a new tire to arrive by riverboat from Phnom Penh.

Many of these trail bikes are still on active duty in Asia. But a new breed of adventure motorcycles is attracting affluent older riders from developed countries, tempted by engines ranging from 400 cc to 1,300 cc and features designed for long-distance touring such as large petrol tanks, durable luggage panniers and anti-lock braking systems.

The ADV, or "adventure," sector is the fastest-growing niche in an otherwise static global motorcycle sales market, and will grow by 10% per annum over the next three years, according to a 2019 report by Technavio, a U.K.-based research company. One of the major market drivers is the growing popularity of long-distance touring, especially in Asia, which "will occupy far more market share in following years," the report noted. 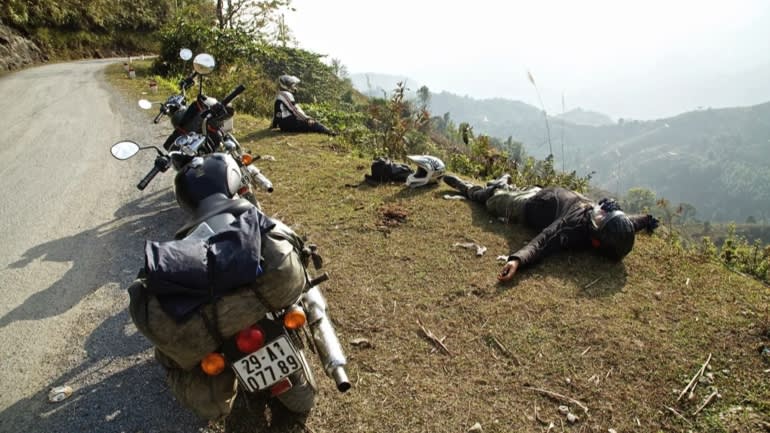 Riders in the segment are typically male professionals aged between 44 and 59 with money to spend on their motorcycle passions. They own large-capacity bikes at home, invest thousands of dollars in motorcycle clothing and riding gear, and are happy to pay $500 to $1,000 a day for fully supported tours in exotic destinations.

"Tourists who ride 250 cc motorcycles in Asia, they're generally younger people who are willing to compromise with smaller bikes," said Rozle Verhovc, owner of Clutch Moto Tours, a Slovenia-based company that offers BMW, Ducati and Harley-Davidson tours and rentals in Europe and will expand to Asia from 2020. "What I do is more upmarket tourism -- people who travel specifically to ride," said Verhovc. "I have a pool of BMW riders in Europe and am now preparing a series of different Asian escapes for them. The first one will be in Vietnam."

To that end, Verhovc has partnered with Tuan Nguyen of MotoTours Asia, a Hanoi-based touring company that has offered guided adventures through the hill-tribe areas of northern Vietnam since 2005. Until recently, Nguyen used Japanese trail bikes and 350 cc Indian-made Royal Enfield Bullet road bikes. But in February he became the first touring company owner in Southeast Asia to invest in a fleet of slick BMW adventure motorcycles, ranging in capacity from 650 cc to 1,200 cc. The fleet upgrade allowed Nguyen to double his rates with no impact on rider numbers. But it came at a hefty price. In Germany, BMW adventure motorcycles cost $13,000 to $16,000. In Vietnam, the same motorcycles cost $30,000 to $35,000, in part because of 80% import and sales tariffs. The Truong Hai Auto Corp., which owns the only Hanoi dealership selling BMW motorcycles, offered Nguyen a single-digit fleet discount, but none of the service, support or marketing that tour leaders rely on to maintain their fleets and grow their clientele.

"From a business perspective, Tuan is a real entrepreneur because BMW is not supporting touring in Vietnam," said Verhovc. "The company that owns the dealership in Hanoi doesn't share his vision. Add the brutal taxes [and] it makes it nearly 'mission impossible.' But Tuan did it anyway."

Kevin Merrell, an American businessman, encountered similar hurdles when he started a high-end, fly-and-ride touring business in Chiang Mai, in Thailand's mountainous north. "There were a lot of great-looking showrooms around, but few of the staff knew what they were talking about," he said. "And most of the workshops I saw were below the global industry standard." 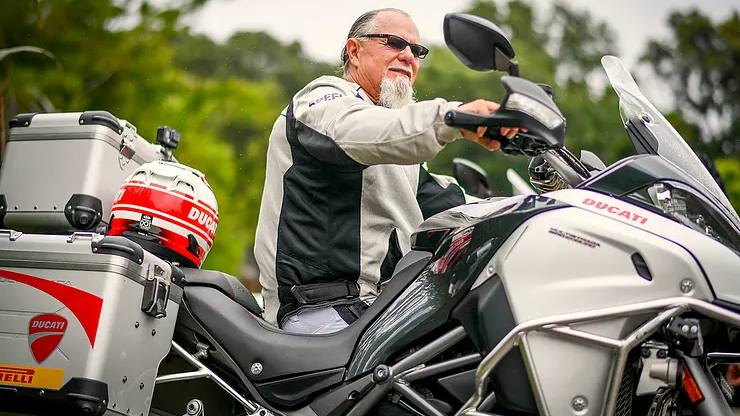 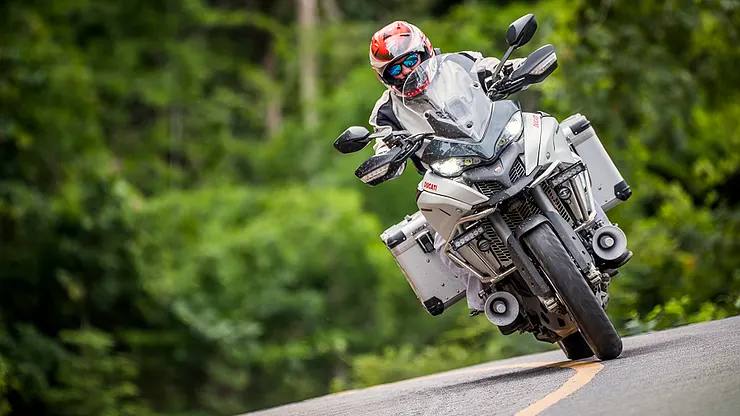 Kevin Merrell of Chiang Mai's DART Motors, top, and one of the 31 Ducatis in his company's fleet. (Photos courtesy of DART Motors)

In 2017, Merrell solved the problem by starting a dealership of his own. His company, DART Motors in Chiang Mai, sells high-end Ducati sport bikes and ADVs designed in Italy. It also has a 31-strong fleet of 800 cc Ducati Desert Sled Scramblers reserved for three- to 15-day guided tours and trips to Thailand's annual Thai MotoGP motorcycle race weekend in October.

"There are several touring companies doing trail bikes in Chiang Mai. But we don't really compete with them because our clients are people who own big bikes back home and wouldn't come all the way to Thailand to ride trail bikes," Merrell said. "And the reality is that the trail bike market is stagnant while ours is growing."

Merrell has also developed a novel third income stream: the Chiang Mai Hotel for Motorcycles. This air-conditioned warehouse 10 minutes from the airport offers riders based in cities like Bangkok and Singapore a place to store expensive motorcycles in Chiang Mai and fly in for weekend rides. 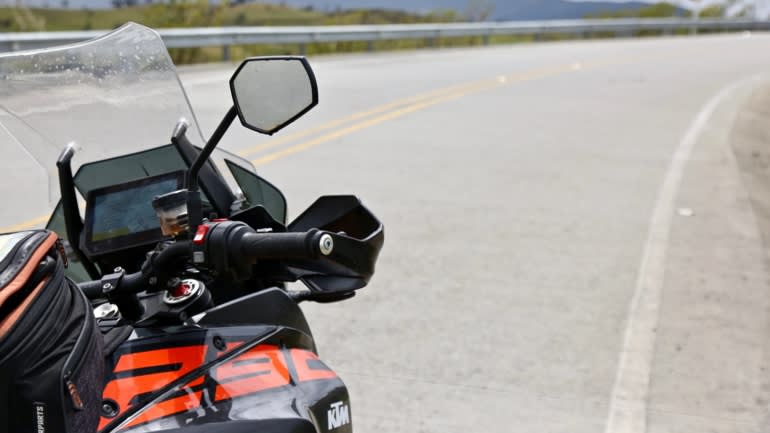 The KTM 1290 Super Adventure S can handle whatever nature throws at it. (Photo by Ian Lloyd Neubauer)

"If you live in Bangkok and you own a yacht, you're not going to moor it in Bangkok. You're going to moor it at a marina in Phuket," Merrell said. "The motorcycle hotel works in the same way. Instead of keeping your bike in Bangkok where the traffic is a nightmare, you can fly here, pick it up and be riding some of the best motorcycling roads in Asia within an hour of landing."

In India, an iconic motorcycle touring destination that boasts many of the highest motorable mountain passes in the world, the ADV market is maturing. European brands such as Ducati, Triumph, Benelli, KTM and BMW are fighting tooth and nail for market share.

But in volume terms, the market is dominated by the Himalayan, a homegrown ADV manufactured by Royal Enfield in Chennai. With a 410 cc engine, the Himalayan lacks the grunt of larger imported ADVs but costs a fraction of the price, and can cross the mountain range it was named after without missing a beat. I know because I did it with one. 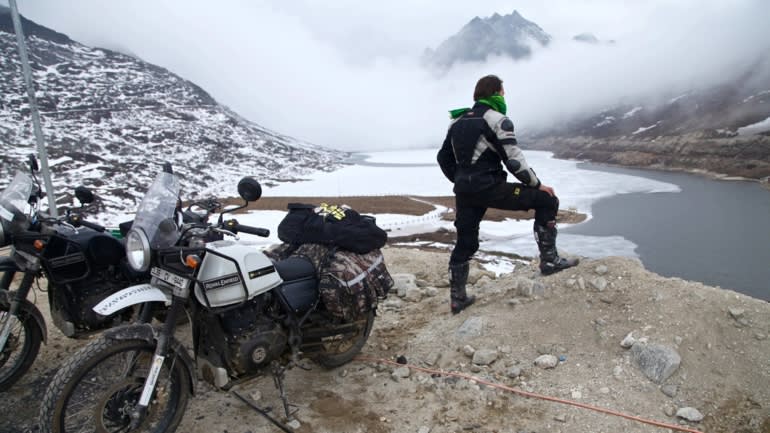 "If I were to buy a Triumph Tiger 800 cc, it would cost me a huge amount of money -- around $20,000 -- but a Himalayan with ABS brakes and fuel injectors costs only $3,500," said Shahwar Hussain of Chain Reaction India, who specializes in off-road tours in the little-known northeast.

Previously Hussain offered his customers Royal Enfield Bullet 350 cc road bikes and locally built 250 cc trail bikes. But when the Himalayan was launched in 2016, he upgraded his fleet and never looked back. 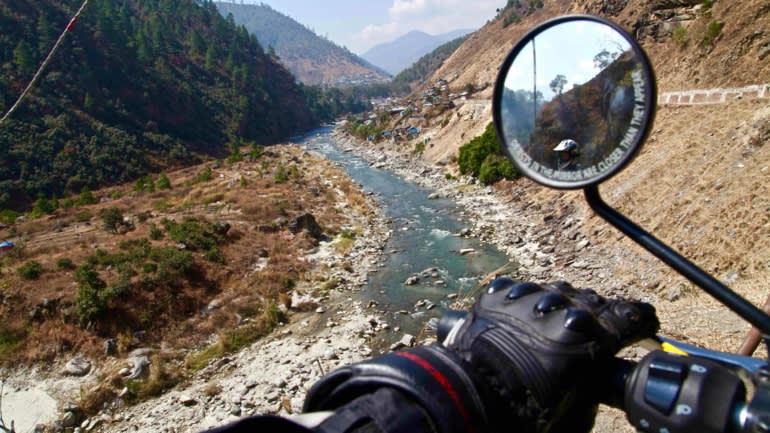 "I rode with Shahwar [in] Northeast India ... on old Enfield Bullets in 2016," said Peter Marshall, a train driver from Australia. "The roads were really bad -- the worst I'd seen in my life -- and the bike wasn't really suited to the terrain. But I had so much fun I went back this year with my son and did it again using the Enfield Himalayan. The difference between the two bikes was like night and day."

The reason, said Hussain, is that the Himalayan was designed for long-distance touring on bad roads. "It opened up the touring market in India to older wealthier riders from Western countries who weren't interested in coming to India to ride smaller-capacity bikes like the Bullet," he said. "It changed my business."