How a centuries-old Japanese industry is adapting to climate change 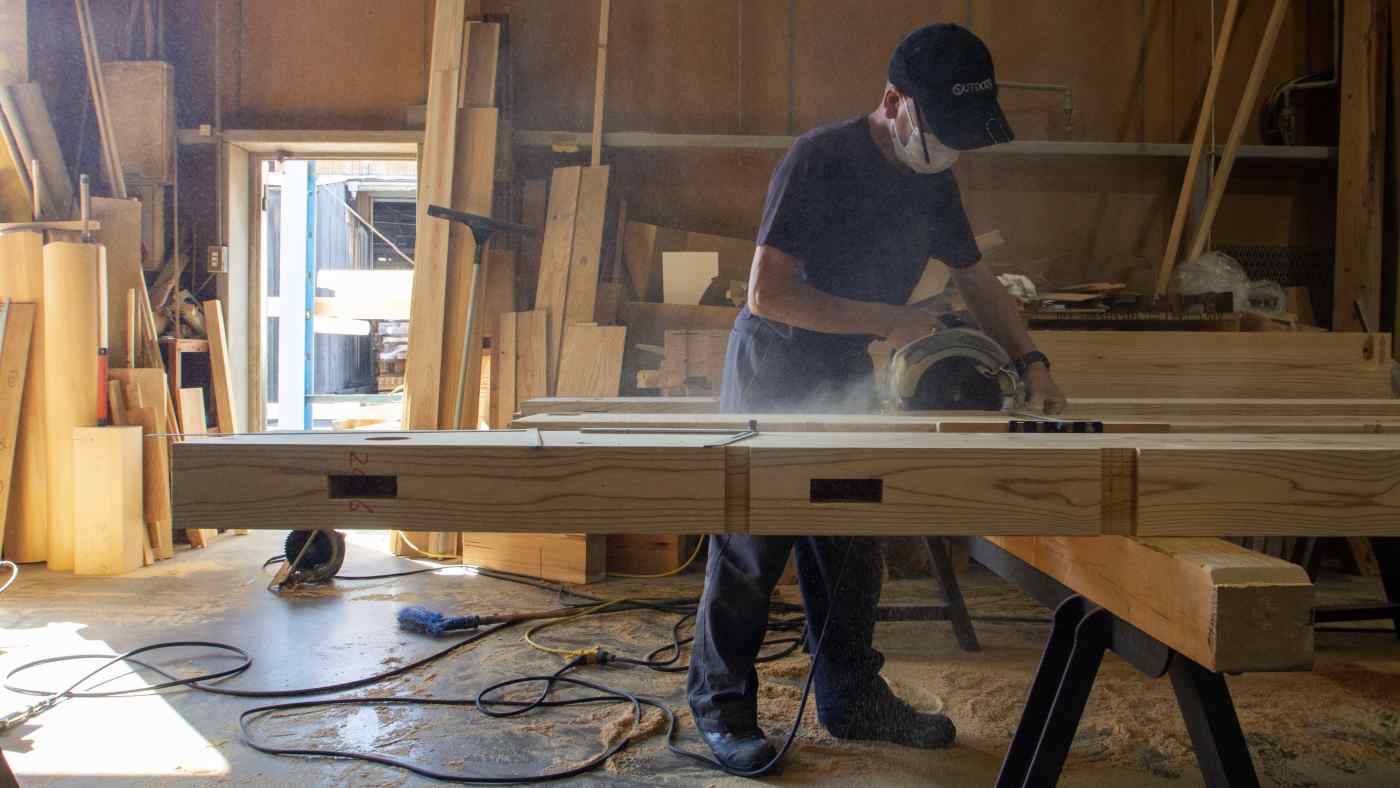 WAKAYAMA, Japan -- I am quite sure Takashi Sakohira noticed my apprehension as we drove along the winding, narrow mountain pass and I struggled to take my eyes off the near-vertical drop a few meters away.

We were at one of Yamacho Forestry's Wakayama Prefecture tree farms and Sakohira, the planning department general manager and my guide, was driving us up and down its forested slopes. Yamacho's origins stretch back to the mid-Edo period -- about 350 years -- and this particular farm also has a long history.

Near one of its entrances, where an access road parallels a valley stream, former settlements of workers and their families from over 100 years ago -- now stone ruins -- dot the banks.

The cedar and cypress trees grown by Yamacho are generally harvested on a 60-80 year timeline, then transported to its Tanabe City harbor complex, which is stocked with machinery that hasn't changed much in decades. Finishing touches, or hard-to-machine-cut jobs, are completed by hand.

Like other Japanese forestry companies -- many are centuries-old -- predictability and deliberate action are built into Yamacho's DNA. Global warming is changing this. 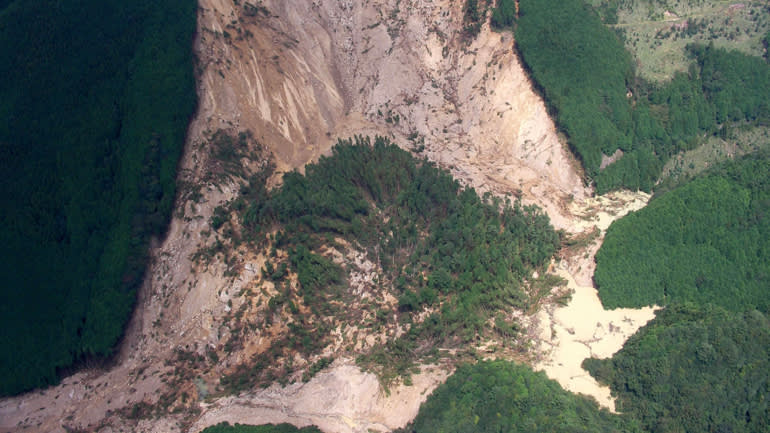 While Japan is typically thought of as scarce when it comes to natural resources, timber is an exception. Although one of the world's most densely populated countries, two-thirds of Japan is forested. Despite this, Japan's forestry industry began a sustained decline in the 1960s, unable to compete with lower-cost imports.

But after bottoming out in 2009, demand has since began to recover, with the industry now poised for greater gains.

After Japan's Forestry Agency in April called for a 40% increase in domestic wood consumption over 2019 figures by 2030, Tokyo now sees forestry -- and new applications for timber -- as a way to bolster the economy and at the same time help Japan become carbon-neutral by midcentury. The big problem is extreme weather.

"Due to heavy rain in 2011," said Sakohira, referring to Severe Tropical Storm Talas, "four hectares of mountains in their 80th [growth] year disappeared. And in recent years, some trees have become unharvestable due to the effects of rain and typhoons."

Losing four hectares -- or 40,000 sq. meters -- of product was just the beginning of the public and private costs. A year after the 2011 typhoon season, Wakayama Prefecture -- the location of the collapse -- was busy constructing a multitiered drainage and catch gate system to ensure that the debris didn't threaten people and property.

Sumio Matsuura is a principal investigator at the Disaster Prevention Research Institute of Kyoto University. Hailing from Tokushima Prefecture in Shikoku, Matsuura recalls being familiar with rain-induced disasters from a young age, if not particularly moved by them.

That changed with the 1972 Shigeto Disaster, when Matsuura was in high school. In neighboring Kochi Prefecture, a heavy morning downpour caused a slope collapse above Shigeto Station in the town of Tosayamada. With one person buried alive, a hastily-assembled search team started a rescue operation in the pouring rain. Four hours later a secondary collapse buried the search party, resulting in a total of 60 deaths.

"Even now," said Matsuura, "I can't forget the newspaper article the next morning. It can be said that the Shigeto Disaster led to my university major, Forestry Engineering, and my current profession."

Like weather forecasting, the science behind landslides is complex. But answers about climate change's effects are emerging. A slope collapses, said Matsuura, "when the balance of rainfall infiltration to storage to outflow is lost." 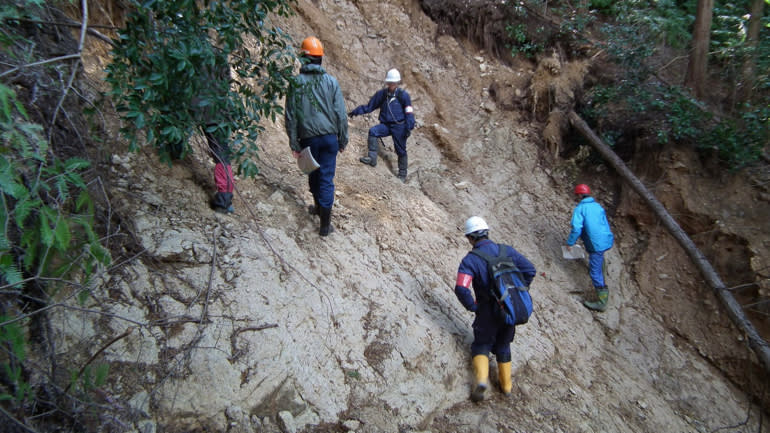 A recent report by the Japan Meteorological Agency tabulated the days with extreme precipitation events since the 1970s, finding that they are extremely likely to have increased. This year's deadly landslide in Atami, for instance, was the result of the area receiving more than 150% of its average July rainfall over 72 hours.

While it is easy to see how this would disrupt the balance of a mountainside, extreme dry weather, exacerbated by climate change, can also play a part. During arid stretches, mountain soil can swell, contract and crack. When the seasons change, this "makes it easier," said Matsura, "for rainwater and snowmelt water to penetrate." This can trigger a deep-seated landslide, a particularly destructive kind where multiple soil layers slough away.

For Yamacho, accidents are as worrisome as other dramatic events like landslides that -- if taking place on a tree farm during extreme weather -- are less likely to involve personnel. "When compared to asphalt roads, forest paths tend to get weathered by rain. So without regular maintenance, they are hazardous for a truck loaded with timber," said Sakohira.

On our tour, I observed rubber drainage belts embedded every few meters along the mountain roads for drainage. Sakohira said they were helpful, but "regular repairs are needed."

It is obligatory for Japan's forestry companies to provide the government with reforestry plans prior to a harvest. Despite this, cleared land is often left fallow, a practice that increased during the industry's long decline. If cheap imports are pushing down prices, said Matsuura, "even if you plant a forest, it may not be possible to expect profits over the years."

If forestry companies plant immediately after harvesting, new root systems will eventually stabilize the ground. But it is also important to properly clear out the old root systems after felling the trees. As the roots of the former trees decay, they cease to hold the soil.

Even with immediate replanting, there is a point of peak instability a few years after logging, when new, small root systems are precariously balanced between decayed undergrowth. While Japan has a forestation assistance program, which issues subsidies for such work, and is promoting the use of new varieties of fast-growing trees, the impact of these efforts will be limited without strong demand.

In the meantime, Japan's rainfall is expected to increase by more than 10% over the century and if current trends continue, much of this downpour will be concentrated in extreme precipitation events, buffeted by long dry spells. Landslide issues will almost surely get worse before they get better.

Despite these challenges, climate change may eventually benefit Japanese forestry. Timber is increasingly seen as an ecologically-friendly alternative to concrete and steel, being renewable and far less carbon-intensive to produce. 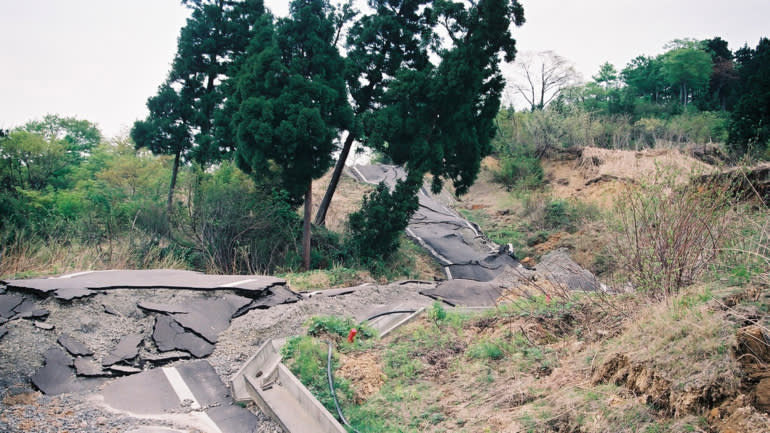 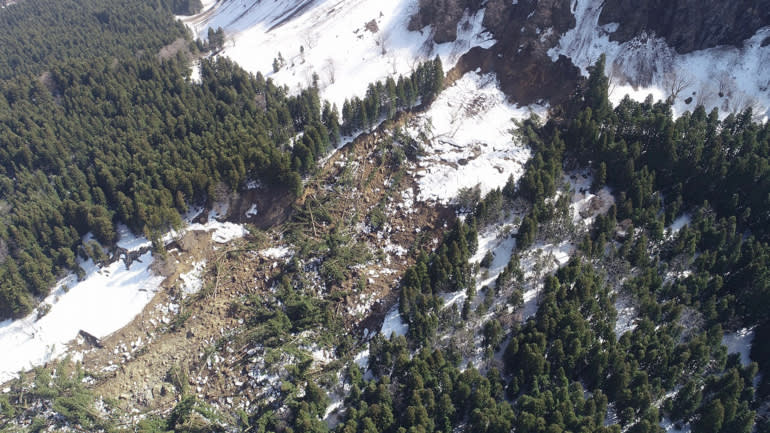 Postwar, there was a movement away from wood for large, nonresidential projects due to fire concerns. But as the public becomes more aware of the scientifically-verified comfort benefits of timber and fire-resistant wood technology, the tide is turning.

There are also especially beneficial-to-Japan advantages to timber: wood performs well during earthquakes, with its flexibility providing leeway compared to concrete which often cracks. One 2010 law even made the use of some timber mandatory for low-rise institutional buildings, paving the way for more ambitious projects.

Yamacho has seen some success with these new applications for lumber. Last year, its wood was included in an award-winning Tokyo high rise designed by Takenaka.

The National Stadium for the 2020 Tokyo Olympics contains 3,000 sq. meters of domestic timber and plans were recently announced by Mitsui Real Estate and Takenaka for Japan's largest timber office building, also in Tokyo. Sakohira believes that this momentum and supporting legislation will lead to increased domestic timber use.

"The current natural environment," said Sakohira, "has problems all over the world. One of the solutions is to plant, grow and use mature wood. It is rewarding that little by little, people are realizing this."