Exploring the remote realities of China's Belt and Road

Little enthusiasm for high-profile projects along the border with Russia 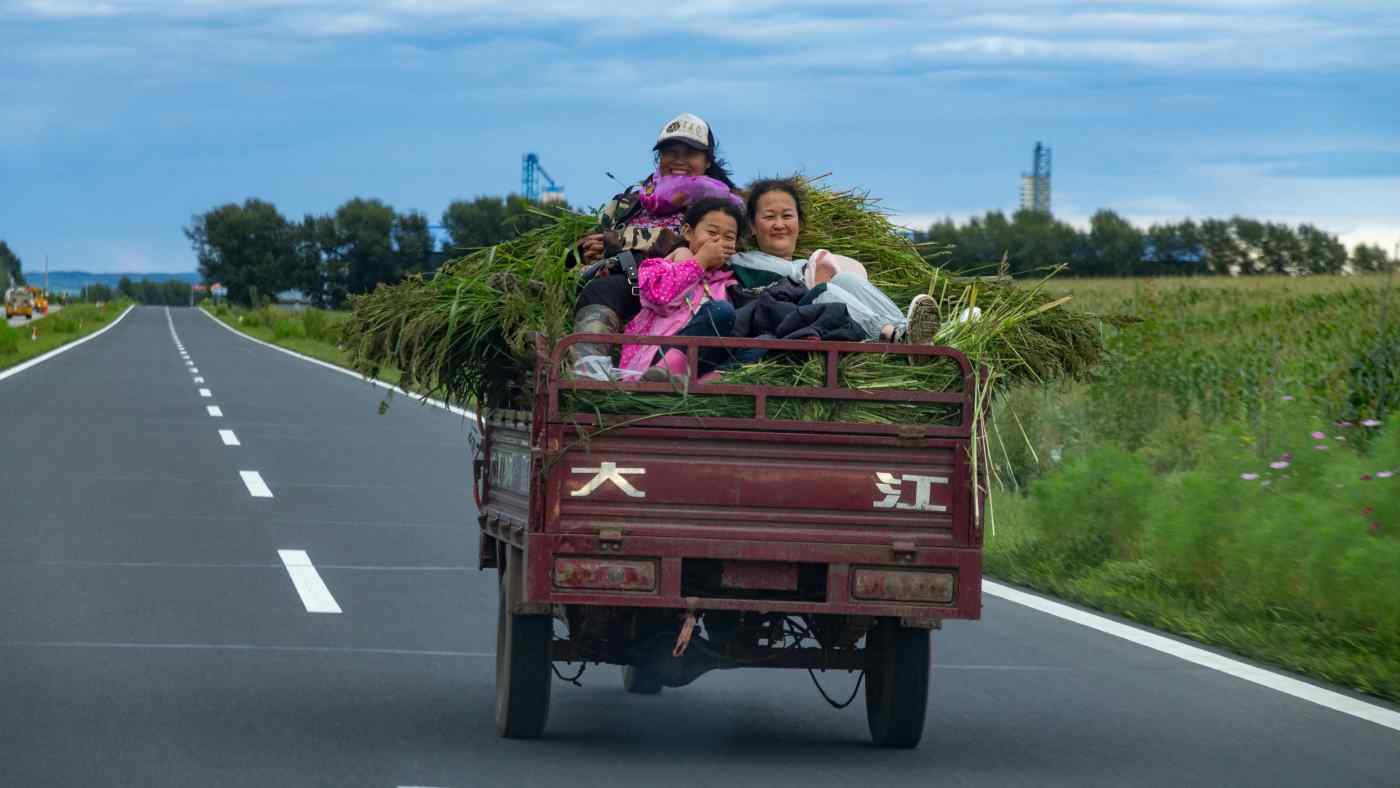 INNER MONGOLIA, China -- On a warm August day in Manzhouli, on China's northeastern border with Russia, workers are unloading truckloads of Russian goods for storage in local warehouses. Later, the goods will be repackaged and reloaded onto Chinese trucks and trains for distribution throughout China.

The process is lengthy and inefficient. But it is also a mainstay of the border economy, which some locals worry is threatened by regional manifestations of China's sweeping Belt and Road Initiative on infrastructure. Others say that local BRI projects are more about shoring up diplomatic relations with Russia than benefiting the region.

These were key observations during an expedition that saw two researchers drive along almost the entire 4,300 km border between northeastern China and Russia in August and September. Our route took us from Hunchun in Jilin Province, where the Chinese, Russian and North Korean frontiers meet, through Heilongjiang Province to Manzhouli in the autonomous region of Inner Mongolia, near the border between China, Russia and independent Mongolia.

The journey took us across landscapes ranging from seemingly endless wheat fields in China's breadbasket to the barely inhabited Khingan mountains and the rolling hills of Inner Mongolia. Along the way, we visited every city and almost every major town on the Chinese side of the border. Wherever possible, we arranged visits to BRI infrastructure projects and interviewed construction managers and related officials, as well as locals living in the shadow of these projects.

Across the region we found a strong state focus on the role of the BRI in promoting trade and mutual understanding across the China-Russia border. This year marks the 70th anniversary of Sino-Soviet diplomatic ties, which has seen the border come into the spotlight as both countries celebrate a relationship they now portray as closer than it has ever been. Yet Sino-Russian projects included under the BRI umbrella have made little progress, and it is unclear how the drive is impacting the lives of ordinary people living along the border. 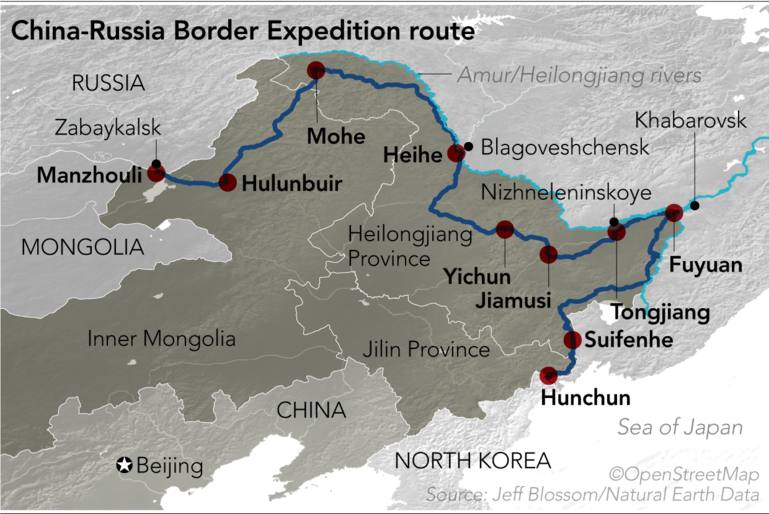 Looking out onto the Ergun River and the vast Russian wilderness from Inner Mongolia. (Photo by Ankur Shah and Vivek Pisharody)

The most high-profile BRI projects in the region are two cross-border bridges located in Heilongjiang Province. Heilongjiang is the Chinese name for the Amur River, which demarcates much of the border and acts as a formidable barrier to trade and cultural contact. Currently, trade and tourism across the Amur rely on barges in summer and ice bridges in winter, both heavily dependent on weather conditions. When completed, the two bridges will allow year-round connectivity across the river for the first time.

Beyond simply creating trade opportunities, these bridges are also promoted as bringing Chinese and Russian locals together and increasing people-to-people connections. The bridge nearest completion carries a highway that will connect the small Chinese city of Heihe with its Russian neighbor Blagoveshchensk, one of the largest cities in the Russian Far East. The second bridge will carry freight trains from the Chinese city of Tongjiang to Nizhneleninskoye in Russia. Although Chinese state media have reported that both bridges will be up and running by the end of 2019, local officials said they will not be operational before early 2020.

Both are being marketed by Beijing under the BRI label. But agreements for these projects were signed nearly two decades before the launch of the BRI in 2013. The rebranding of preexisting projects as part of the Belt and Road is one of the ways in which China has achieved such a high level of global media coverage for the BRI in such a short time: According to a 2018 report by the Kuala Lumpur-based CIMB ASEAN Research Institute, more than 1,100 BRI projects are underway in 88 countries, requiring a total investment of about $750 billion. 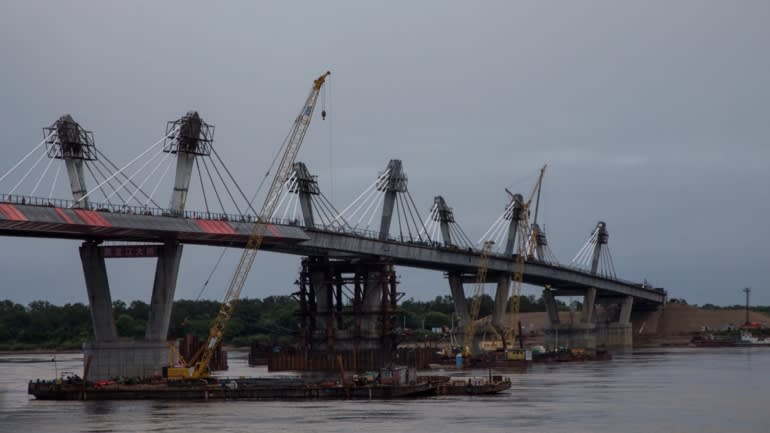 Top: The Blagoveshchensk-Heihe highway bridge connecting Russia and China is due to be completed early 2020. Bottom: Construction workers put the final touches on the bridge. (Photos by Ankur Shah and Vivek Pisharody)

Local Chinese business owners, who will be the main users of the bridges, were skeptical that the $600 million price tag was economically justified. Retailers in Heihe told us that importing Russian products from Blagoveshchensk by barge worked well enough for their needs, despite its unreliability in the region's notoriously harsh weather.

When we asked locals in the city of Jilin, the starting point for a planned high-speed rail link between Jilin and Hunchun, how they conceptualized the BRI, most said they were unsure what the initiative was intended to achieve, and what to make of it. This was an attitude we encountered repeatedly, and it reinforced the sense that, at least in China's northeast, the BRI is much less a concrete engine of development than a broad, strategic national concept. The high-speed rail project in Jilin encapsulates this contradiction. Chinese state media have referred to it as an initiative designed to "integrate Jilin into the BRI," further blurring the criteria determining what constitutes a BRI project.

Surprisingly few of the people we met gave positive evaluations of the BRI. In Manzhouli we interviewed local entrepreneurs in cross-border industries ranging from the booming trade in coal and timber to international tourism, but found few who expected the BRI to benefit them. Many felt that projects in this region have been incorporated into the BRI because of their symbolic and political value to China-Russia relations, rather than to benefit locals. From this perspective, the BRI is perhaps more about building diplomatic bridges than physical ones. 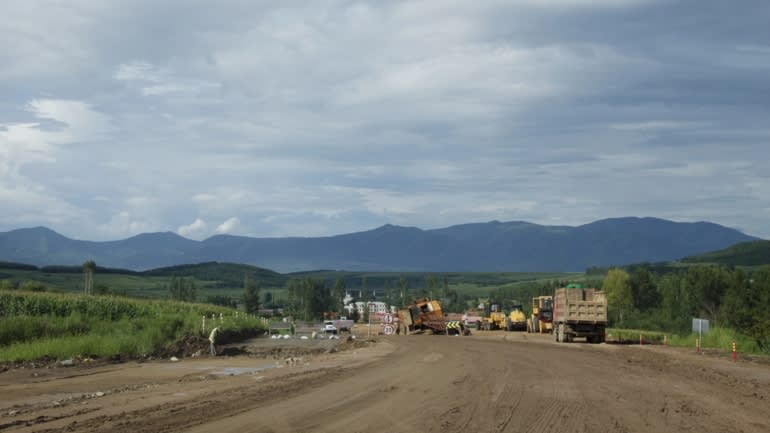 A local government official from the same city, Manzhouli, went a step further, saying he was convinced that the BRI had brought no positive benefits to the area. He introduced us to business owners in the shipping industry who said that increased connectivity may damage the economies of Chinese border towns through the elimination of inefficiencies such as those we saw in the shipping yards -- even if it improves the national economy and increases overall bilateral trade.

We heard this view several times on our journey, as locals contended that the BRI was something that may benefit national trade but not necessarily local businesses. Northeastern China is remote, but it is already served by a network of high-quality roads, ranging from expensive toll roads between the cities of Jilin and Hunchun, to provincial and county roads leading up to China's northernmost village at Beijicun. Most locals we met were accustomed to traveling long distances by road and seemed less inclined to use the gleaming high-speed train lines that often earn BRI backing.

Interestingly, these road networks owe their success to less-discussed infrastructure initiatives such as the East-West Economic Corridor, initiated by the Asian Development Bank. The interconnectedness of road networks in China's northeast seems well-suited to its population's needs, which further brings into question the value added by the BRI. Top: The land port in Manzhouli, Inner Mongolia. Bottom: Construction work along the road from Suifenhe to Xingkaihu. (Photos by Ankur Shah and Vivek Pisharody)

This may be well understood by Beijing -- in 7,000 km of driving we saw just one piece of roadside propaganda relating to the BRI. Since it is common across China to find red banners displaying political slogans and promoting campaigns, this jars with the supposed importance of the northeast to the BRI, discussed widely in Chinese media and academia, and suggests that Beijing is aware of local views.

Throughout our travels in this region, far from the hyperbolic headlines about bridges of friendship, we encountered a distinct lack of enthusiasm toward the BRI, and no sense of excitement relating to the near completion of some of its flagship projects. There was little sense that the initiative represented a major breakthrough for the region or that it would enhance ties between ordinary Russians and Chinese living along their shared border.

It is too early to know whether the BRI will ultimately change these regions. For now, locals in northeastern China appear uncertain about the initiative and skeptical of its promises.

The authors' expedition was partially funded by a grant from the FutureMap Foundation.