A chef at Wolf Burgers in Singapore prepares a Future Burger, made with alternative protein.
Life

SINGAPORE -- In Singapore's vibrant Chinatown district a line of cheerful plastic pigs was installed ahead of the Lunar New Year, facing a row of shop windows garlanded with bak kwa -- a type of sweet pork jerky so wildly popular at this time of year that long queues form outside the better-known outlets.

Chinatown is the epicenter of Singapore's largely carnivorous food culture. In its concrete hawker centers, stalls are hung with whole roasted ducks and chickens; in the back streets, curb-side restaurants serve every part of the pig. It is a bold place to start an experiment in eating differently, but here, just off South Bridge Road, the founders of one of Singapore's handful of vegan restaurants have chosen to establish a beachhead.

Hello Baby was launched last year by the founders of HRVST, a vegan fine-dining restaurant in the central business district. A tiny stall just a couple of meters square, it sells so-called "dirty vegan" food, designed to challenge the perception that giving up animal products means abandoning indulgent eating.

Since the start of this year, Hello Baby has offered a new item that its founders hope will help to convince carnivores to try plant-based diets. It is one of the first outlets in Singapore to offer the next generation of "fake meat" products -- meat-free alternatives that are designed to look, feel and taste like the real thing. 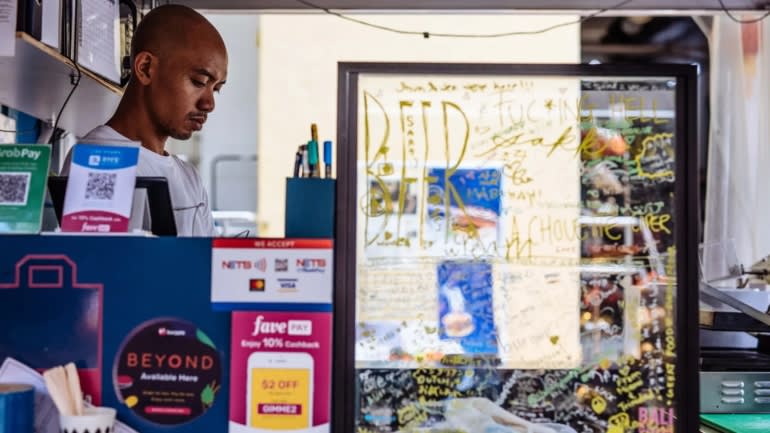 Hello Baby, a vegan burger stall in Singapore’s Chinatown, is one of the first outlets in the country to stock next generation alternative meats.

Hello Baby's patties, developed by California-based Beyond Meat, are surprisingly similar to beef burgers, with the same texture and appearance and an almost indistinguishable flavor.

The company hopes they can act as a gateway drug, helping to ease consumers into cutting down on their consumption of animal products. "Burgers are very relatable. It's easy for people to understand," Thng said. "It's just a burger, but instead of a beef patty, a pork patty, it's made of plants... it actually tastes a lot like meat, it looks like meat." The global market for meat substitutes was worth more than $4 billion in 2017, according to Allied Market Research, a U.S.-based corporate data analysis provider. Although demand is highest in Europe and North America, the Asia-Pacific region is the fastest-growing market for the products, with demand forecast to increase at a compound rate of 9.4% a year until 2025.

This demand reflects a nascent shift in social attitudes, as consumers become increasingly aware that current levels of meat consumption are environmentally unsustainable, and can damage human health.

More than a quarter of the earth's land surface, excluding the polar regions, is used for livestock grazing, and a third of crop lands are used for livestock food production, according to the United Nations Food and Agriculture Organization. Clearing land for grazing and feed is one of the principal drivers of the large-scale destruction of tropical forests, particularly in South America, where more than half of felled rain forests end up as pasture for cattle. Taking into account the destruction of forests, the energy used in producing and moving food around the world and the methane produced by cattle and sheep, the livestock industry is responsible for 14.5% of global man-made greenhouse gas emissions, according to the FAO.

Meat production is also an inefficient way to feed a growing population. About 40% of crops grown are used to feed animals rather than people, the FAO says, meaning that the amount of land and water use "embedded" in 1 kg of meat is much higher than in a similar amount of plant protein. As the global population grows, there is simply not enough land and water to support the way we eat now -- a problem that will be exacerbated by climate change.

"We know that the planet cannot support a Western type of diet, we need to see a major shift happening in Western countries," said Dora Marinova, director of the Curtin University Sustainability Policy Institute in Australia. "In developed countries, the consumption has to be a sixth or a fifth of what we are consuming."

Global meat production is still increasing rapidly to meet the demands of emerging economies, where growing disposable income often translates into changing diets. "China is the biggest problem that we have, because China is very fast changing its traditional diets to a Western type of diet," Marinova said. "The first thing that's happening is eating more meat and animal-based products."

In the early 1980s, China's meat consumption per head was around 13 kg per year. Today, it is more than 50 kg per person -- just over half the level in the U.S. -- and the population has grown by more than 400 million people. That means that consumption has already surpassed sustainable levels in China, Marinova said. "From an environmental point of view, it has to go down to at least half of what it is."

Growing meat consumption has also created serious health concerns. Diets that are heavy in red meat and dairy products have been linked to a surge in so-called "lifestyle diseases" such as diabetes, cardiovascular conditions and cancers. Governments across Asia, from China to Singapore, have launched campaigns to encourage their citizens to cut down on meat as they try to reduce the growing burden on their health care systems.

This concern is trickling down into social change, according to David Yeung, chief executive of Green Monday, a Hong Kong-based company that is the distributor for a number of alternative meat products in Asia, including Beyond Burgers.

Yeung said the advent of "next-generation" meat alternatives could help to shift societies onto a more sustainable consumption path. "I actually think that [these products] are the pioneers in terms of really changing peoples' perception," he said. "Yes, it is possible to have a plant-based version of meat that tastes just as good and is in fact healthier."

As well as importing products from the U.S. and Canada, Green Monday has created its own plant-based meat alternative specifically targeted at consumers in Asia, where beef is not a major component of regional diets. "Omnipork," a plant-based ingredient that simulates minced pork, is being produced in Thailand and sold in Hong Kong, Macau and Singapore, with launches in Taiwan and China planned. "Pork is used in everything. It is almost like the base ingredient that is applied to all sorts of dishes. Whether it is dumplings, dim sum, xiaolongbao (Chinese dumplings), ma po tofu, it's everywhere," he said.

Green Monday was responsible for bringing Beyond Meat to Singapore earlier this year, and early indications suggest that demand is strong. A food truck selling alternative proteins at a launch event in January shifted nearly 5,000 units over four rain-soaked days. The products are now being sold at a number of local eateries, from upscale hotels to burger joints. Wolf Burgers, a mid-market chain with outlets in Singapore and Japan, said it has seen strong uptake of its "Future Burger," which uses the Beyond Meat patty. "We don't position it as vegetarian," said Ho Song En, Wolf Burgers' co-founder. "We believe that it's a meat alternative. Whilst going green is also very important to us, it's a big ask to say to someone: 'Save the planet, don't eat meat. Eat lettuce instead.'"

Ho said the company had been looking for a meat alternative product for more than a year. "I don't think it's a fad. I think the underlying trend is as any population or society gets more affluent, they start eating better, they start eating right."

The challenge for companies like Wolf Burgers is pricing. The vast scale of the global meat and dairy supply chains has created huge economies of scale. Plant-based alternative products use far fewer resources and have a much smaller environmental footprint -- a University of Michigan study found that producing a Beyond Burger generates 10% of the greenhouse gas emissions of an equivalent beef burger and uses a fraction of the water and land required -- but small production runs make them substantially more expensive. Wolf Burgers' Future Burger sells for around twice the price of its standard beef products, at around $14.

Yeung hopes that once the market is proven production will ramp up and costs will fall dramatically. "We can't just say: 'Let me just influence that 1% of people [who can afford it today]. If we want to achieve real impact, we actually need to influence 50%, 80% of the world," he said. "We've got to mobilize people toward a much more healthy and sustainable diet, because the way we eat is simply unsustainable."