Midway through nine-days of scrutinizing, acquiring and discussing Asian art offerings from leading New York galleries and auction houses, Christie's staged a series of auctions that included a record-breaking $260 million one-night sale of 30 works of Chinese classical art from the Fujita Museum in Osaka, Japan.

Jonathan Stone, chairman of Asian art at Christie's, credited the total of $300 million in sales that week to the auction house's strategy of touring selections from the sale exhibition throughout Asia, encouraging Asian buyers before the auction. The highest price paid was for a Chinese 13th century hand scroll with exceptional provenance, Chen Rong's "Six Dragons," which sold for$49 million.

However, it was another Chinese scroll that really had people buzzing. "Views of a Lingbi Rock,"painted by Wu Bin in 1610, has for centuries stirred great passion among serious collectors as a work rumored to be of enormous beauty and historical importance. Hidden away for decades by various collectors, it has been rarely seen.

The work emerged briefly in 1984 and was sold by its Chinese owner to a private U.S. collector at auction in New York. The new owner paid the then astronomical sum of almost $2 million, at the time the highest price ever paid for a Chinese work of art. Since then it has remained cloistered in the U.S. with the same collector, far away from the exhibition circuit. 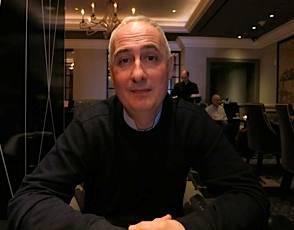 The splendor and value of the Wu scroll was highlighted during Asia Week by the launch of a book about the painting, entitled "Crags and Ravines Make a Marvelous View," published by the Rasika imprint of British publisher Sylph Editions.

"If you were given the chance to introduce da Vinci's Last Supper or the Mona Lisa to the world, wouldn't you do it?" said Marcus Flacks, a London and New York-based seller of Chinese arts and furniture, and the editor of the book. "This painting is one of the superstars of art, certainly the most important Chinese painting in private hands."

The Wu painting and the book about it are a window into classical Chinese painting and culture. A passion for collecting unusual rocks has always been widespread in China, and as early as the Tang dynasty (618-907) Scholar's Rocks became an important aspect of artistic and literary life. Rocks were acquired and collected by the literati for their visual, intellectual and spiritual qualities. To many, they represented both permanence and impermanence, because they are shaped by nature.

The scroll came into being because of a man who was in love with a rock. In 1610, Ming dynasty official, painter and writer Mi Wanzhong purchased a Scholar's Rock for his growing collection and was so enamored by it that he commissioned his painter friend Wu to create a scroll to celebrate its beauty. 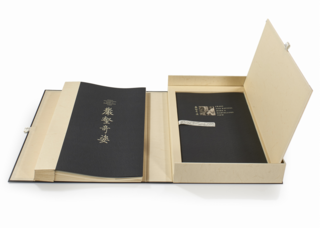 The scroll, more than nine meters long, was not a simple representation of Mi's rock but an innovative work of art inspired by it. Endeavoring to capture the spirit of the rock, Wu presented it from 10 different angles, including its underside, with each of the views having its own personality and presence.

"Realizing that one view could capture only a fraction of the rock's allure, Wu Bin decided to portray it from 10 different vantage points which, unrolled one by one, create a journey through the rock and its wonders," said Flacks. "Each view is set against the background of the paper, with no shadows, no evidence of light sources, and no further visual context. Wu Bin sealed the rock in an abstract, timeless space."

The scroll was created not for exhibition but as the starting point for a discourse between artists and intellectuals. When the 10 paintings were completed, Mi added his own calligraphic commentary, called a colophon, to the end of the scroll. Subsequent owners and several scholars have added additional commentaries. "This is a work of art that is still alive," said Flacks.

"In creating the book we've given each portrayal of the rock its own folder, which is opened by the viewer at their own pace. The observer can come at the rock from any angle, just as with the rock, and recreate the experience of looking at the scroll," said Flacks. "Modern culture places a very different set of demands on an observer of art in terms of time and energy. We are trying to recreate an older Asian experience of a work of art."

The original calligraphy is difficult to read, and until the decision to publish the book the commentary had never been translated from the Chinese, nor had the Chinese been transcribed so that it could be read separately from the scroll. Ornan Rotem, owner of the Rasika imprint, saw the challenge of recreating the experience of the scroll when Flacks suggested producing a book. "The calligraphy was quite difficult to read and we saw a great opportunity to transcribe it in Chinese and contribute a greater understanding of the entire hand scroll," said Flacks.

Speaking in his London office, Rotem explained that it would be natural for Westerners to embrace an interpretation of the scroll in the form of a book. "The Western approach is quite different than an Asian approach," he said. "The Chinese would try to recreate the rock and its paintings as part of their tradition. Western tradition would try to illuminate what already exists. Re-engagement comes naturally. We were fortunate that the owners of the scroll allowed us access to the painting because of their long-standing friendship with Marcus Flacks."

Rotem and his partner, Num Stibbe, took hundreds of photographs over two days, photographing the scroll at the residence of the owners. The pair then went on an extensive search for the perfect printer, and the perfect paper. Ultimately, they had the book printed in Italy by Trifolio in Verona, using Japanese paper from Takeo in Tokyo for much of the book.

The boxed book is published in a numbered edition of 300, much like a work of printed art. Rasika has already pre-sold at least 100 copies of the $1,500 book based on the legendary stature of the scroll. "People are starved for the experience of a book that they can hold in their hand because we are forgetting the feel and smell of a new and exciting book," said Rotem. "It has never been a better time to introduce a beautiful book. Publishing today is about curating and finding the best and most gorgeous books to distribute."

Flacks sees the book as the latest contribution to the 11 calligraphic comments attached to the end of the scroll by its owners and scholars. "Even today, across the years and oceans, we can partake in it and expand it," he said, noting that a great art work is never really owned, it is merely on loan from the universe.

Flacks and Rotem shared the expense of creating the book. Asked why, Flacks replied: "This wasn't a labor of love, it was an honor."