MANILA -- Batman will never know it, but the caped crusader played a big role in the career of Daniel Bernas, a world champion in the Filipino martial art of arnis. As an 18-year-old university student, Bernas chose arnis for his physical education class after reading a Batman comic book that featured a character using this fighting form.

Bernas' entry into arnis through Western comics is unusual for an indigenous martial art whose roots lie in the era before the Philippines became a Spanish colony in the 16th century, when the islands were ruled by local chieftains.

But his story reflects the roundabout history of arnis, which after decades in the doldrums is seeing a revival in the Philippines partly because of its popularity abroad. Also known as kali, escrima and Filipino martial art, arnis was made the country's official national sport in 2009, replacing sipa, in which players kick a piece of lead wrapped in straw or other material.

Just a decade ago, he says, he was often asked "What's that?" when he told people that his sport was arnis. "But I experience that less and less now," he says. At the very least, they know that it's the [sport] that involves sticks [as weapons]." 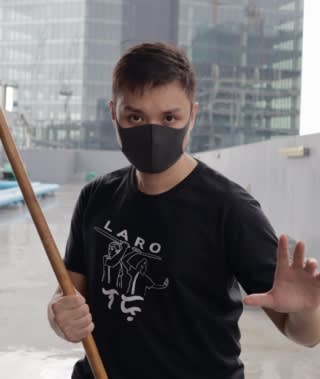 Daniel Bernas has been busy sharing his arnis tips online during the pandemic. (Courtesy of Daniel Bernas)

Bernas, who has YouTube, TikTok and Instagram channels on arnis, says the sport has grown more quickly in recent years in countries such as Russia and the U.S., and in some parts of Europe. Some foreign clubs have multiple followers of arnis and other Southeast Asian combat sports such as Indonesia's pencak silat and Thailand's muay thai.

The 2009 law made arnis part of the curriculum in all schools in the Philippines, a country of nearly 110 million people. But it has been taught much more widely in state-funded schools, where it has a stronger base than in private schools, whose middle-class students have shown less interest. Its popularity has also been boosted by inclusion in the country's Palarong Pambansa (National Games), an annual multisport tournament involving student athletes from 17 regions of the Philippines.

"Because of the Palarong Pambansa, in every city, every town, there are students learning arnis. It's now becoming popular, unlike before," says Ruel Gatbonton, who has won gold in two WEKAF world championships and is recognized as a grandmaster. 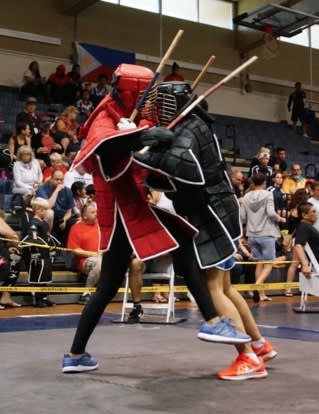 Sparring with double sticks, made of rattan, at the 2018 WEKAF World Championships in Hawaii. (Courtesy of Kyla Melo)

Progress has been hampered, though, by problems such as poor support for tournaments, disagreements among clubs, and competition between arnis brands and styles, which have different followings. Arnis also faces strong competition from modern overseas sports such as basketball, which benefits from a thriving professional league and is regarded by many Filipinos as the islands' unofficial national sport.

Efforts to promote arnis are also challenged by its complex forms and highly individual technique. A good arnis athlete deftly blends his or her own individual moves in a sport that involves swinging and twirling movements, as well as hand-to-hand-combat, grappling, thrusting and parrying.

"If I'm sparring, I'm not necessarily trying to execute [a] pattern that I learned in exactly the same way. I just kind of go with the flow," says Bernas, reflecting that this may have been how tribal elders in precolonial times taught youngsters to fight -- not by following a curriculum.

Some Filipinos are also deterred by the apparent danger of the sport, which they equate with hard-core combat, says Gatbonton. "What sticks in people's minds is the dangerous part. Who wants to get hurt?" 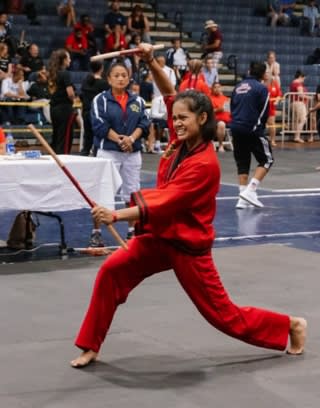 Arnis competitions include the anyo (forms) event, shown here at the 2018 WEKAF World Championships in Hawaii. (Courtesy of Kyla Melo)

"Arnis is already known in other countries, but in Asia more attention is needed to promote it," says Ruth Ann Lavarias, a 25-year-old arnis champion and coach who trained Myanmar's arnis team for the 2019 Southeast Asian Games, held in the Philippines.

The Filipino team dominated the competition in arnis, winning 14 of 20 gold medals up for grabs in the sport. Vietnam won four, and Myanmar and Cambodia one each -- with all three teams coached by Filipinos.

"Arnis' beautiful techniques really appealed to me, besides the fact that they are super-practical in real life," says Nguyen Thanh Tung, trainer of Vietnam's national pencak silat team, who worked with Gatbonton in training the country's 2019 arnis team. Tung, who first picked up an arnis stick in 2005, added, "I combine many arnis skills to teach my athletes. Arnis is a good fit for Vietnamese."

There are arnis clubs in Malaysia and Singapore, Gatbonton says, but Vietnam is best placed to succeed because of its early investment in the sport. However, Lavarias, head coach of the Philippines' University of Baguio arnis team, says Myanmar "could be better than the Philippines too. They just need exposure and support to join competitions."

A major problem for further growth of the sport is that arnis tends to feature in the SEA Games only when they are held in the Philippines, because the host country is allowed to include local sports in which at least four countries agree to compete. In spite of a strong promotional push, Manila has yet to succeed in getting arnis included as a regular event in the biennial tournament, unlike better-known indigenous regional sports such as pencak silat or sepak takraw (kick volleyball). 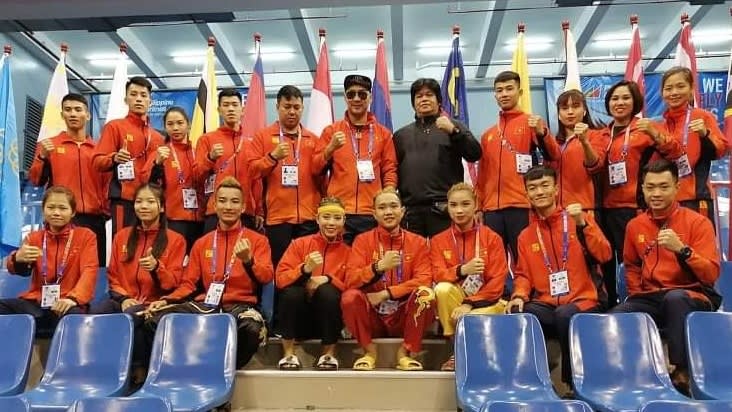 Vietnam’s arnis team won four golds at the 2019 Southeast Asian Games in the Philippines. Helping to train the team was Ruel Gatbonton, in black, who has won gold in two WEKAF world championships and is recognized as a grandmaster. (Courtesy of Ruel Gatbonton)

Gatbonton says the Philippines needs to find allies in neighboring countries if arnis is to become a regular SEA Games feature. There is a lot to learn from how [South] Korea pushed the popularity of its martial art, taekwondo, around the world, he says, adding: "It's not important who tops [the medal tally], the important part is that it becomes a regular sport event."

So far, however, arnis is not among the 36 sports listed for the 2021 SEA Games, to be hosted by Vietnam.

Meanwhile, further progress in the Philippines may depend on the emergence of a sports ecosystem that can provide livelihoods and careers for athletes, trainers, technical officials.

Arnis coaches often work for the love of the sport, while juggling other full-time careers -- and many have continued to train their teams during the COVID-19 pandemic, while waiting for sports events to resume their normal timetables. "We're volunteers, for the meantime," says Lavarias.