TOKYO -- In normal times, May is a colorful month in the Philippines, filled with fiestas, parades and pageants in honor of the Virgin Mary. Over the 30 days known as Flores de Mayo (Flowers of May), Filipino Catholics gather in their parishes to pray and offer flowers to Mary, culminating with a re-enactment of the Santacruzan. This was when, according to Catholic legend, Empress Helena searched for the cross Jesus Christ was crucified on and brought it back to Rome in a grand spectacle.

This year, the coronavirus forced a simpler celebration. In Borongan, a city of 70,000 residents in the central Philippines, a two-car motorcade left the cathedral carrying only the bishop, a few priests and deacons and the cross mounted on the bed of a pickup truck. It was another quiet night as residents complied with a two-month quarantine order from the government in Manila.

As the motorcade made its way, the dark streets were lit up with candles. Wearing medical masks and staying a safe distance away from their neighbors, people brought altars and family icons of the Virgin Mary outside their homes.

The sight of people kneeling and making the sign of the cross as the motorcade passed brought Tettel Obon, one of the organizers, to tears. She and other volunteers had been producing a daily afternoon program to continue the Flores de Mayo devotions virtually. Families sequestered at home were able to pray along on social media, television or radio. "Everybody at home and even their neighbors joined the online Flores de Mayo," says Obon, with even nearby parishes tuning in.

Locals' efforts to reinterpret Flores de Mayo for the coronavirus era have been at once acts of faith and defiance. The suspension of religious services among other mass gatherings to curb the spread of the coronavirus has been deeply felt in the Philippines, where towns and communities grew around the local church. Philippine cultural identity, heavily shaped by 300 years of Spanish colonial rule, is intertwined with its status as one of only two predominantly Catholic countries in Asia.

While bishops had sanctioned online masses, the cancellation of Santacruzan dealt a blow to the thousands of fashion designers, dressmakers, makeup artists and florists who count May as their peak season.

Before the mid-March lockdown, Emar Vida was preparing his small atelier in Cavite, a province just outside of Manila, to dress over 20 Santacruzan queens. His staff not only sew couture gowns but also create floral bouquets and arches and provide hair and makeup for clients, who pay upward of 20,000 pesos ($400) each. 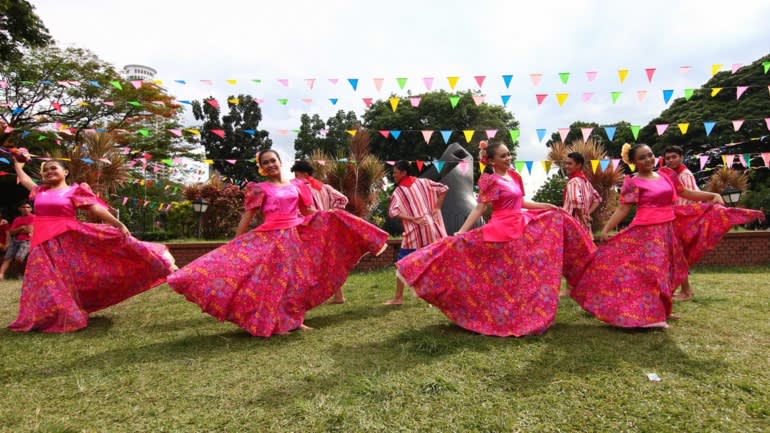 "I'm just a small business and I only have three or four employees," says Vida, whose staff grows to eight during the May peak. "Now they have no work because of the pandemic."

Unemployment in the Philippines surged during the strict two-month lockdown of Manila and the main Philippine island of Luzon. Around 2.6 million lost their jobs, and the government predicts an economic contraction of 2%-3.4% this year.

Florist Pipay Cojuangco was able to maintain an income from his catering business and smaller flower orders for Mother's Day, enough to keep his staff of five. "I have to share my blessings because I haven't completely lost my income," he says.

But he laments the loss of community during the lockdown, which coincided with Holy Week, the most solemn period in Christianity, and put a damper on Easter celebrations. "We used to be able to see each other in church and arrange the flowers together," Cojuangco says. "We can't even invite our neighbors over to pray together."

Going into debt to sponsor a daughter or niece for the Santacruzan or to feed relatives and neighbors during a fiesta is not uncommon in the Philippines. Such celebrations with religious origins have grown bigger and more ostentatious to lure tourists to regions far from Manila. 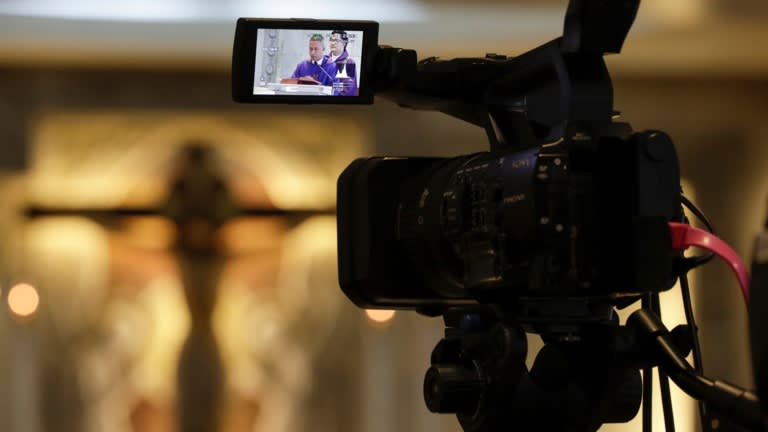 Top: A Catholic mass is livestreamed from a church in Quezon City on March 15. (AP Photo) Bottom: Children wait outside their homes for the Marian caravan, in Borongan on May 31. (Courtesy of Alren Beronio)

Fiestas have been a way for the church to keep the public engaged. Even before the pandemic disrupted religious services, church attendance was dropping each year. Only 44% of Filipino adults surveyed by the Social Weather Stations in 2019 said they attended weekly religious services, down from 66% 30 years ago.

"Santacruzan is essentially a religious activity that has become a beauty pageant," says Dr. Michael Demetrius H. Asis, chair of theology at Ateneo de Manila University. "A deep-seated popular religiosity is ingrained in our culture to make God accessible and understandable."

But as interest has waned, religious pageants have become the domain of the Filipino gay and transgender community, despite the Catholic Church's stance against gender nonconformity and same-sex marriage. Some priests have allowed gay men and transgender women to participate in Santacruzan, and the first Santacruzan where all the pageant queens were gay was held in Marikina City in 2015. 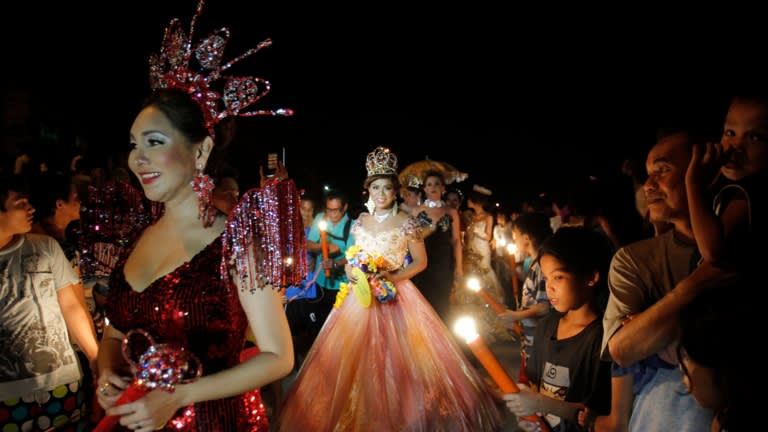 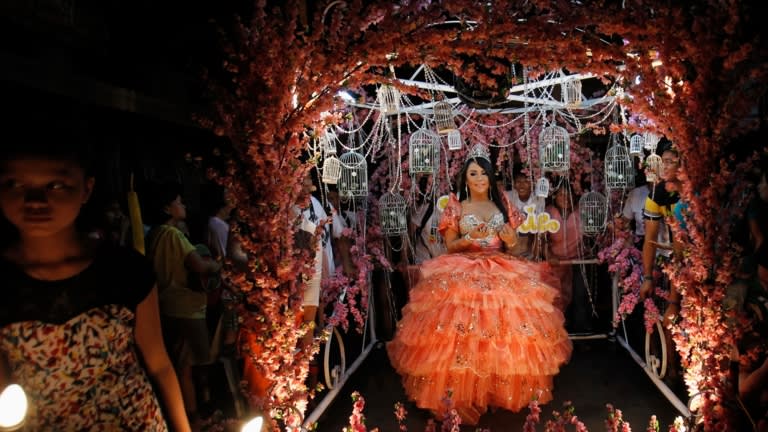 The people of Borongan were not the only ones using technology to celebrate the Flores de Mayo this year.

A community in Marikina City, in order to support the beauty and fashion industries, pushed through with their Santacruzan pageant online. On Facebook, photos and videos of contestants in full glam were viewed and shared by over 4,000 people not only in the community, but also nationwide. Even one overseas Filipino worker participated from Saudi Arabia.

"It was a big help to the winners, their dressers and makeup artists, especially during quarantine when they have no other source of income," says Marlou Parro, chair of the local youth council that organized the online pageant. The rule was that contestants and dressers spend nothing and use only gowns and materials they had at home.

Jenine, who placed second, says she joined the pageant to help her friend, a makeup artist. She gave the prize of 2,000 pesos to this friend, saying that the pageant gave her something to do in quarantine.

After the success of the online Flores de Mayo, Parro is planning a similar celebration of Marikina's Rehiyon-Rehiyon Festival. Instead of the usual 60 dancers, the livestreamed fiesta later this month may only consist of one festival queen and three backup dancers performing in their homes.

The government has gradually lifted quarantine restrictions on Luzon and the rest of the country, but a possible resurgence of infections hangs over the year's remaining fiestas. The National Live Events Coalition, an industry group of event planners and creatives, says it is collaborating with the Department of Health on a safety manual for small and midsize events. But mass gatherings of the sort attracted by fiestas and other religious events are still out of the question.

"I'm sure it will take years, as long as people still fear the coronavirus," says Gil Granado, president of the Fashion Designers Association of the Philippines and a member of the NLEC.

Whether it takes one year or two, the Filipino love of fiestas, processions, pilgrimages and ritual spectacles will not be diminished. "It is the community's way of remembering and perpetuating the values that make their lives meaningful," says Asis, the theologian. And especially in these times, "It's a way to escape from poverty, from the harsh realities of life."