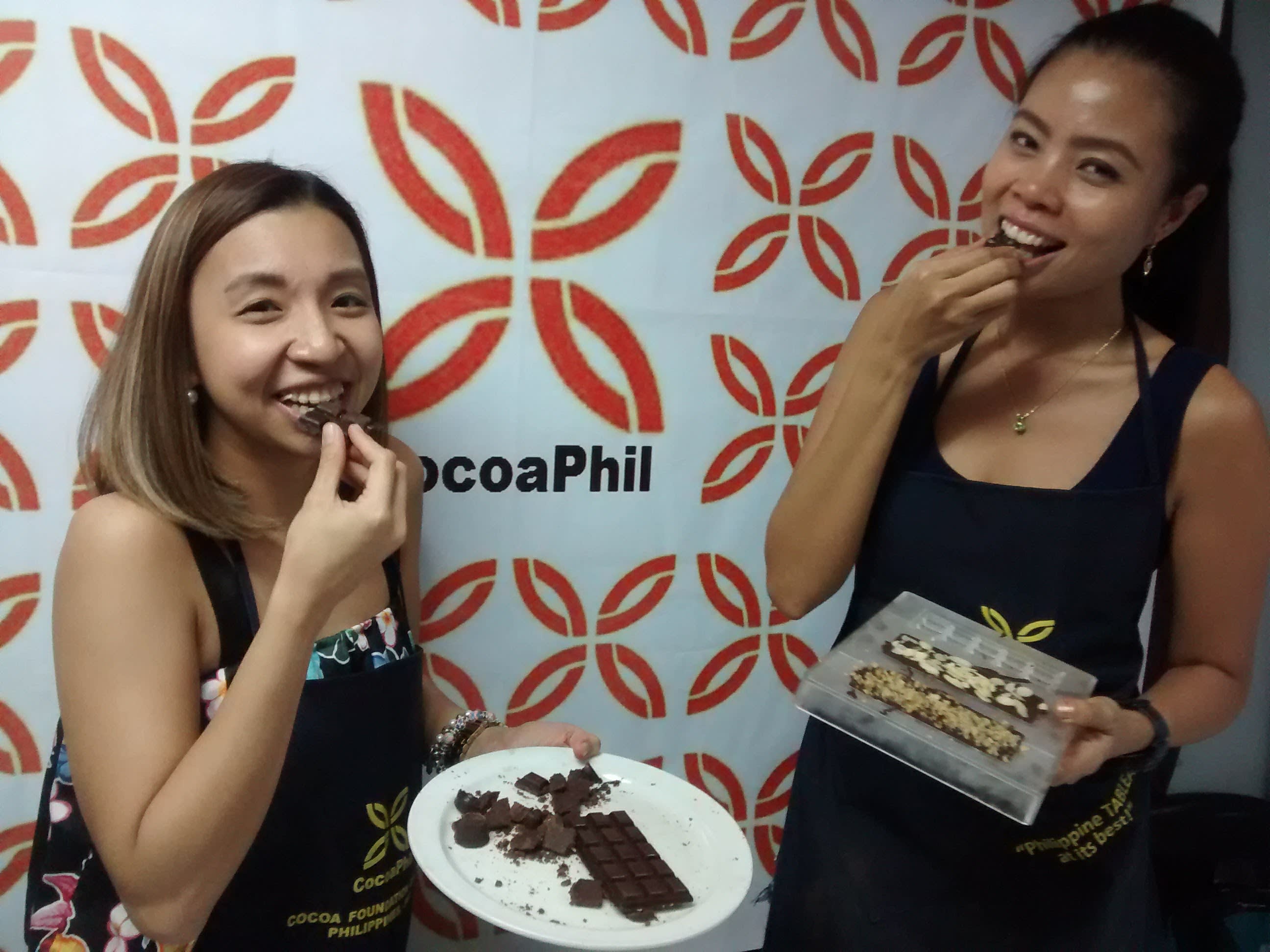 MANILA -- When Gladys Hernando's father became sick last year, the television network executive visited the family farm and started thinking of ways to make it more productive under her management.

"A friend convinced me to look into cacao farming," said Hernando. "I got excited with the idea of 'planting chocolates' because we are a family of chocoholics."

Cacao is the dried seeds of the South American evergreen tree Theobroma cacao. The raw seeds can be cold pressed and eaten as a form of chocolate, but most are ground and roasted to make cocoa powder, from which mass marketed chocolate is produced. A student in CocoaPhil's chocolate-making class removes freshly made pralines from a mold. (Photo by Prime Sarmiento)

In November 2016, Hernando took a weekend course on cacao farming organized by the Cocoa Foundation of the Philippines, known as CocoaPhil, and bought 520 seedling trees. Three months later, she returned to CocoaPhil to learn how to make tablea -- tablets of chocolate made from ground and roasted cacao beans, which are used as a base for candies, ganache and pralines.

Output recovered to 10,000 tons a year in 2016, but the government is seeking to encourage cacao planting and has targeted an increase in production to 100,000 tons a year by 2022. This is in part spurred by news reports quoting estimates by leading chocolate manufacturers such as Mars of the U.S. and Swiss-based Barry Callebaut of a shortfall in global supply of 1 million tons a year by 2020. 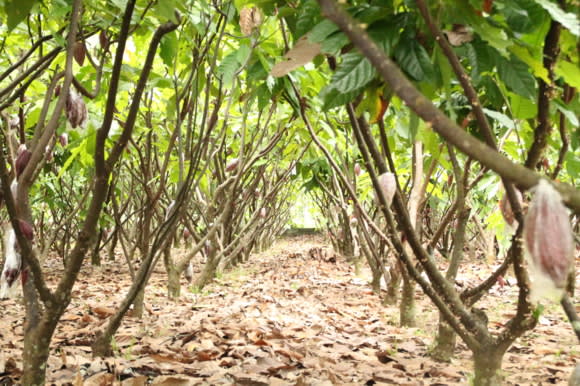 Trees bearing cacao pods at a farmers' cooperative in Malabog, a village in the province of Davao del Sur (Courtesy of Arvin Joseph Peralta)

The Department of Agriculture launched a plan last year to expand the area of farmland under cacao plantation from 25,000 hectares to 100,000 hectares, and to increase the number of trees from 4.5 million to 50 million.

To develop better crops, the Philippine Council for Agriculture, Aquatic and Natural Resources Research and Development, part of the Department of Science and Technology, has set up community-based nurseries in Mindanao, a key cacao growing area, to produce high-quality planting materials. The agriculture department is distributing seedlings and fertilizers to farmers, and has created local cacao industry councils to facilitate technology transfers.

The aim is to boost crop yields from the current level of 0.5kg per tree per year to 2kg, helping at least 100,000 farmers to earn additional annual income of 130,000 pesos ($2,524) per hectare. Cacao farmers and tablea manufacturers can also get tax breaks intended to help boost profitability and production.

Local demand for chocolate and chocolate products is four times local production, at 40,000 tons a year, according to CocoaPhil. As a result, the Philippines imports nearly $2 million worth of cacao beans annually from Malaysia and Indonesia, alongside more than $50 million worth of chocolates from the U.S. and Singapore, according to the Philippine Statistics Authority. Euromonitor International, a consumer market research company, estimates that Philippine chocolate sales will grow by 13% this year to more $300 million. 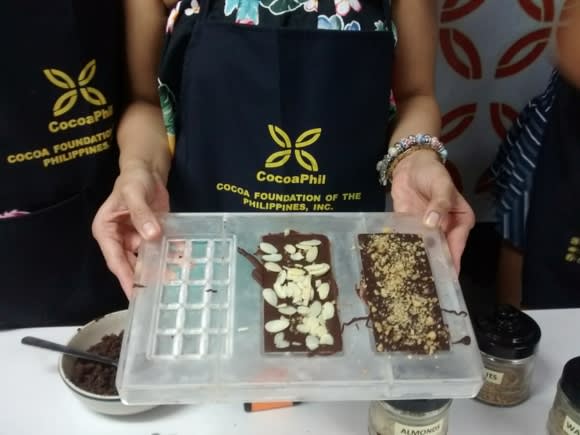 "We can't produce enough beans for our own use," said Edward David, CocoaPhil's executive director, adding: "We're building up demand from the domestic market."

David, who helped to craft the government's expansion plan, said it is achievable by 2022, largely by planting high yielding cacao varieties in coconut farms, a practice known as intercropping that is officially regarded as environmentally sustainable. There are more than 3 million hectares of coconut farmlands in the country, and cacao seedlings can bear fruit after three years.

But the government also wants to export beans for the first time, with the U.S., Europe, Japan and Australia the top target markets. CocoaPhil said that cacao bean exports could bring in at least $250 million a year in sales revenues from 2022.

Hernando, who took over the family farm when her father retired, is one of many who have seized on the growing demand for chocolate to enter the market. While she had no initial plans to become a chocolatier, Hernando has also decided to develop her own artisanal chocolate, encouraged by CocoaPhil trainers.

In May, Hernando started selling handcrafted dark chocolate bars with nuts, dried fruit and coconut sugar. From small orders, she quickly built up her business and is now selling to three cafes. She is one of a growing number of independent Filipino chocolatiers who are making high-quality dark chocolate. Over the past few years, local artisanal chocolate brands have appeared in specialty boutiques, online stores and pop-up shops.

Local chocolatier Philo Chua, founder of the pioneering local bean-to-bar brand Theo & Philo, said that most Philippine cacao production was committed to major chocolate manufacturers when the brand launched in 2010. "Bean-to-bar" refers to a production process that involves the chocolate maker at every step.

Chua said he thought of importing cacao beans, but abandoned the idea because he wanted to promote Philippine cacao. It took him some time to persuade a farmer to sell a 50kg sack of beans. Seven years later, with his company growing and branching out into products such as chocolate spread, Chua is helping to raise cacao production by working with a farmers' cooperative.

Chua said Filipinos' growing interest in bean-to-bar chocolates reflected a more affluent and health-conscious client base. Joseph Belison, co-founder of Hiraya Chocolates, a local artisanal chocolate brand, agreed. "Everyone wants to eat chocolates, but they're reluctant to indulge in it because they think it's fattening," he said. 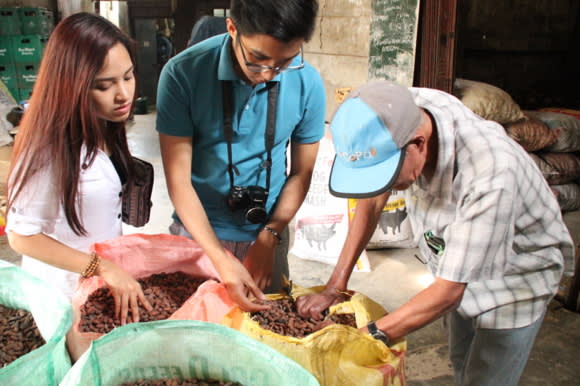 Belison said most consumers are now aware that dark chocolate bars have less sugar, which is driving sales for Hiraya and other bean-to-bar brands. His business partner, Arvin Joseph Peralta, said that many customers promote high-quality local products by word-of-mouth and on social media.

Shiela Briol, a 30-year-old office manager, said she discovered Theo & Philo chocolate in an online shop. Briol said she was impressed by the unique flavors of the dark chocolate bars, laced with chili and rock salt. "But I only buy them occasionally, as they're quite expensive," she said.

Local artisan chocolate bars are priced at roughly 200 pesos each, but this is less costly than U.S. and European brands, which typically cost more than 400 pesos a bar.

Peralta said the popularity of bean-to-bar brands has also increased interest in chocolate-making. "It used to be that we only use cacao for making tablea. But because the technology of chocolate making is now more accessible, we are now able to make use of our own cacao beans to make our own chocolate brands.

"This elevates the experience of [chocolate-making] -- from something traditional like tablea into something that is more exciting and mainstream like chocolate bars," he said.