For Singaporeans zipping along sidewalks, new rules are on the way 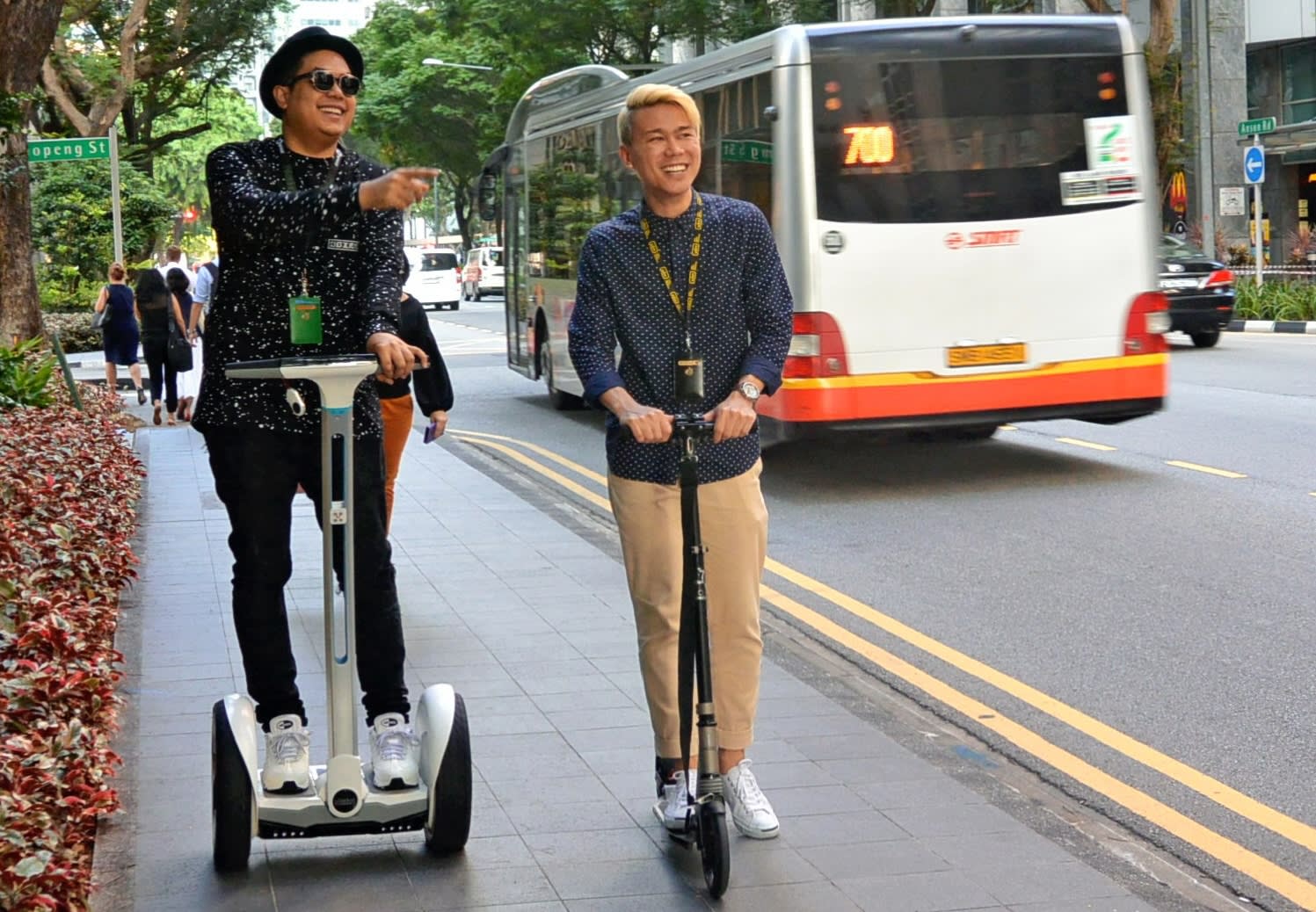 Two Singaporeans enjoy riding a Ninebot, left, and a kick scooter on a sidewalk in the central part of the city.
TOMOMI KIKUCHI, Nikkei staff writerFebruary 2, 2016 13:00 JST | Singapore
CopyCopied

SINGAPORE -- A lot of commuters here have found a relatively new way of getting around. In fact, enough Singaporeans are riding so-called "hoverboards" that the government is preparing to regulate their use.

So what is a hoverboard? It's not a gravity-defying bit of "Back to the Future" magic but a self-balancing, two-wheeled, battery-powered piece of popular culture.

There are a number of reasons why hoverboards and similar personal mobility devices are catching on here, including the high cost of owning a car and the excellent condition of the city-state's roads and walkways.

And once you get to where you're going, the things are easy to carry -- a feature that makes them especially handy for short trips.

In a business district in central Singapore, Dew Francis, 24, who works at an Internet-based service company, sometimes rides his Ninebot to a cafe. Ninebot, a Chinese maker of these new transportation devices, uses robotic technologies that enable users to control where they are going by slightly shifting their body weight.

Francis also used to use his Ninebot to go to work, cutting a 10-minute walk down to a three-minute ride. But then his company moved. "It took me only a few tries to learn how to ride it," Francis said, "and it looks cool, too."

Mikal Chong, Francis' colleague, has his own hoverboard and kick scooter. "It's even smaller than a bicycle," Chong said. "And it's handy to bring onto a train."

According to Ninebot Asia, October-December sales of the product in Singapore increased about 20% from a year earlier. Small boards with steering bars go for 1,290 Singapore dollars ($904). The bestselling seatless unicycle costs S$1,090.

Falcon P.E.V., an online retailer selling a range of electric motor kick scooters, saw a 25% increase in unit sales for 2015. Many of its customers, mainly men in their mid-20s to mid-40s, use the scooters for commuting to work.

The popularity of these simple sets of wheels is largely driven by circumstances particular to Singapore.

The government has been expanding the city's public transportation networks to deal with heavy traffic congestion. It also controls the number of private vehicles in the city-state by requiring drivers to obtain certificates of entitlement for every vehicle they own. A COE costs around S$50,000, a discouragement, to say the least.

But compared to other Asian nations, Singapore's public roads are in outstanding condition. Walkways are well-paved, and some roads have separate lanes for bicycles. In short, the city's layout is ideal for hoverboards and their ilk.

Some pedestrians, however, disagree. There is a movement afoot to regulate the devices, some of which have been hacked by their users to allow for speeds of up to 40kph. Someone barreling down a sidewalk at that speed is bound to trigger at least momentary fear.

In July, the country's Land Transport Authority instructed an advisory panel to come up with rules for the safe use of personal mobility devices including hoverboards and electric scooters. Among other things, the panel is studying whether the devices should be allowed on public roads, and if so, on which lanes they should be used. A set of rules is expected in the first half of this year.

Meanwhile, owning a car still appears to remain a major status symbol for many Singaporeans. Many women here often talk of "the three Cs" that a potential husband must possess -- a car, credit card and condominium.

The outlays involved with that first C are coming down. The cost of a certificate of entitlement rose every year from 2009 to 2013 but began trending lower in 2014. Car sales grew 29% that year on a unit basis.

So let the hoverboard rider beware of the driver.