From France to Thailand on foot Guillaume Perdigues, left, and his partner Vanessa Mapp pose for a photo in Strasbourg, France, at the start of their epic transcontinental walk in February 2019. (Courtesy of Vanessa Mapp)
TOM VATER, Contributing writerJune 24, 2022 08:00 JST | Thailand
CopyCopied

BANGKOK -- A Canadian/French couple set out to walk from Europe to Australia to remind the world that travel is more than a commodity. They sometimes walked up to 14 hours a day, got lost in the jungles of Laos and were involved in a fatal bus crash in their extraordinary journey. They reached as far as Thailand before the COVID-19 pandemic closed international borders.

"I always wanted to travel to the end of the world. I wanted to find some place not on any maps. We had to walk all the way from France to Laos to find that place," recounted Canadian Vanessa Mapp over a plate of papaya salad in a late-night eatery in Bangkok.

In February 2019, the now-28-year-old set out from Strasbourg, France, with her partner, 30-year-old Frenchman Guillaume Perdigues. The two had met in Saulieu in Burgundy in a Michelin-starred restaurant started by the late celebrity chef Bernard Loiseau. Perdigues was head sommelier when Mapp began to work there as chef de rang (assistant head waiter).

"The restaurant temporarily closed in January [2019] and we thought, it's all or nothing. Either we stay in France and continue to work, or we get on the road in the craziest way possible," Mapp said.

"Everyone flies, everyone books ahead. All we had was our passports full of visas and a vague plan about which direction we would walk in. When you cross an international border on foot, you see how one country collides with another -- the food, the religion, the way of life, everything. Walking is what made the trip so interesting. We crossed Tajikistan, Uzbekistan and Myanmar. We are lucky to be here. And we learned how ordinary people travel, how the world moves," she added. Traveling overland from Europe to Asia has a history dating back to the Italian explorer Marco Polo, who journeyed from Venice to China in the 13th century. In the second half of the 20th century, Western hippies began to forge a trail that led to the beaches of Goa in India. That route and its zeitgeist vanished with Iran's Islamic Revolution in 1979. While long-distance overland travel persisted until COVID-19 appeared in 2020, even the hardiest explorers rarely walked. There are exceptions -- 72-year-old Italian Vienna Cammarota is currently retracing 13,000 km of Marco Polo's Silk Road route from Venice to Beijing on foot.

Mapp, who said she went through multiple pairs of shoes along the way, carried 8 kg of luggage, while Perdigues managed to subsist with 6 kg of clothes and books. They ate street food, stayed with locals and, at times, boiled their own drinking water as they walked across 22 countries. They walked an average of 30 km a day, but took buses, local trains and a couple of planes when they had to. In Tajikistan, they walked along miles of freshly planted flower beds through nearly empty cities built around huge squares and gigantic statues. They had Rajasthan, a desert state in northwest India, almost to themselves as temperatures soared to 51 C and no one else ventured outside. They had to flee the Indian city of Rishikesh when a gang tried to pressure them into smuggling gemstones to Nepal.

"The worst part was the waiting to cross borders. We wanted to take a cargo boat from Baku in Azerbaijan to Kazakhstan as the passenger ferry wasn't operating. The port is in Alat, 70 km from Baku. It was a total no man's land. There was nowhere to sleep, no food, no shelter and it was freezing cold. Truck drivers let us into their vehicles and we managed to get onto the boat a day before it sailed. Otherwise, we might have frozen to death. After a 30-hour passage, the boat docked in Kuryk, in what looked like the middle of the desert. We had five-day transit visas and no idea how to get out of there. But we hitched a ride to the Uzbek border in time." 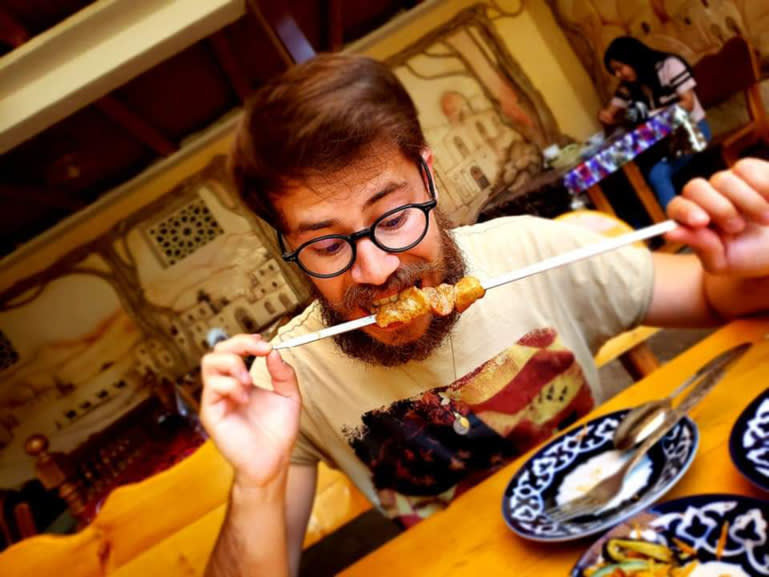 For Perdigues, the food was the main focus. "Turkey, India and Thailand have the best food. Each area has its own culinary identity. But there were other highlights. In Uzbekistan, we ate bull's testicles. We tried everything."

"There is no waste," added Mapp. "In Central and South Asia, people use every part of an animal. They make stock out of everything. In Turkish Kurdistan near the Syrian border, we ate this incredible soup of burned sheep heads."

Perdigues learned a thing or two about winemaking as well. "In Georgia, we spent a night with a local family. They were so sweet; they gave us their son's room and there was a table full of food. They showed me their cellar where they kept their whites and reds in 2-liter coke bottles, without sulfites. Those wines were of amazing quality. We drank 4 liters and didn't have a hangover the next day." Mapp said Tajikistan, Uzbekistan, India and Myanmar were the most challenging countries to pass through.

"In Myanmar, the government had forbidden to let foreigners sleep in private homes. People saw us walking in heavy rains and stopped their trucks to offer us a lift. They told us they wanted to take us home and offer us food but they couldn't. The government had built a tourist infrastructure that prevented us from knowing what was going on in the country. We heard about the plight of the Rohingya (a Muslim group living in mainly Buddhist Myanmar) and asked people about it, but whatever was happening was very hidden. People seemed happy and smiling, but there was so much fear."

Almost a year after they had set off, Mapp and Perdigues reached northern Laos.

"We slept in someone's house by the Nam Ou River. The people had been displaced by Chinese dam projects. They had no electricity or water. They shared three small fish and a bit of rice for supper. It was really shocking to see how the Chinese were treating the Laotians. There was a hand-drawn map on the wall that showed the villages in the area. We were using maps.me, an app that's more precise than Google. That area was totally blank. That's where I wanted to go." The road less traveled in northern Laos, off the Nam Ou River. (Courtesy of Vanessa Mapp)

Mapp says she felt as though they were close to what she imagined the end of the world to be like. "Our hosts told us 'walk two days straight and then you see a big tree and you turn left.' We found the big tree but we became trapped in a swampy jungle. We walked for five days, no sleep, eating only the sticky rice and eggs we had brought along. We ran out of water. Eventually, we found a river and decided to follow it. But there was no way to walk along its banks.

"I had only one pair of shoes and I hated getting them wet, but it got dark, our torch no longer worked, we had no phone and we got scared. So we walked in the riverbed until we saw an old woman who was picking vegetables. She told us how to get to the nearest village. At dawn, we saw smoke rising from the forest. We chanced on a wedding and I felt like we'd reached the light at the end of the tunnel."

As the couple emerged from the jungle, they hitched a short ride in a minibus. When it collided head-on with a Chinese construction vehicle, the passengers in the front were killed. On Jan. 1, 2020, Mapp and Perdigues found themselves, relatively unharmed, in a Bangkok hospital. As COVID-19 began to close international borders, the two became the managers of the city's Mezzaluna restaurant, which has two Michelin stars. 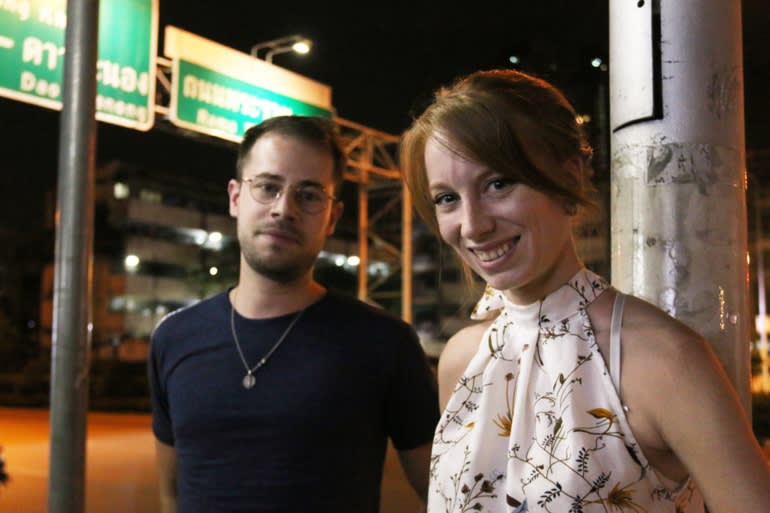 Perdigues and Mapp in Bangkok in May. They are already planning for the next leg of their journey. "We'd like to walk through Indonesia, the Philippines, Taiwan, China, Korea and Japan," Perdigues said. (Photo by Tom Vater)

"We are privileged," Mapp said. "We took the opportunity to witness different countries, and to live differently for a while. We had the feeling, a year before COVID-19, that traveling freely may no longer be possible in the future. The rich are getting richer and the poor have less and less. Perhaps, not so long from now, one might not be able to travel long distances overland, thanks to geopolitical changes, universal economic hardship and closing borders."

As countries slowly reopen in the wake of COVID-19, Mapp and Perdigues are making plans for the next leg of their journey. "We'd like to walk through Indonesia, the Philippines, Taiwan, China, Korea and Japan," Perdigues said.

Next, Mapp wants to try to cross the Bering Strait. "It's ambitious and we may not be able to get the papers. If we can't walk, we'll try to take a boat. We've gotten this far, and crossing from Russia to Alaska and then walking on to Canada would be boucler la boucle (to buckle the buckle), a complete round-the-world voyage, a closing of the circle for me, and a special way to introduce my partner to my country."